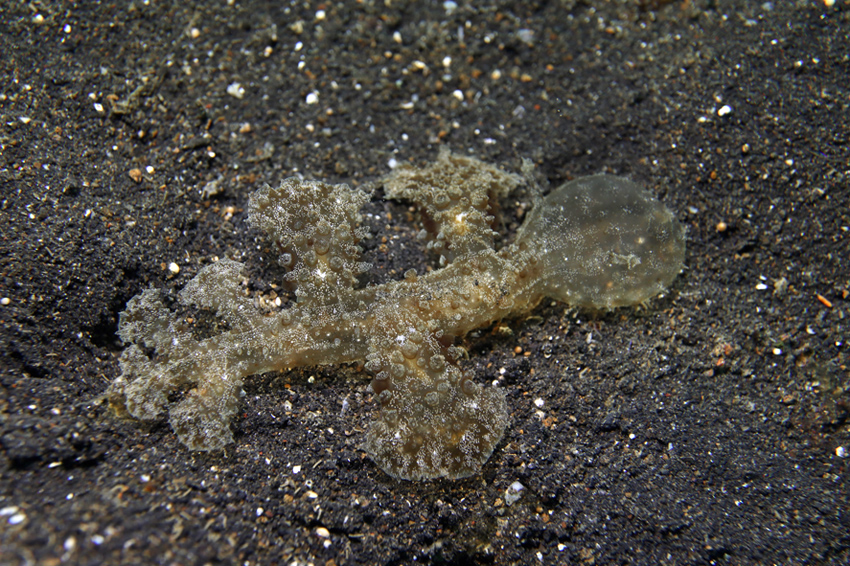 Some years ago, still new to the Opithsobranch world, I wrote a post on my old website marveling at an animal called Pteraeolidia ianthina, or the Blue Dragon. It was then my candidate for the strangest looking creature I’d ever seen. No longer. While diving at Lembeh Strait earlier this year, we came across the animal above.

I literally could not work out head from tail. It seemed to be moving mostly with one end in front, but that end had a particularly implausible head candidate, a large flat frying-pan or shovel. That seemed a more likely tail. The rest of the body included several blob-like appendages coming out unpaired, and the whole design had limited rhyme or reason. I was completely at a loss – did not even have a phylum for it. Jim Ris Mamuko, my guide, took out his slate and wrote a word on it: ‘nudibranch.’ Surely not, I thought. But that is what it was, Melibe viridis.*

As a nudibranch, it was a mollusc, and related to familiar slugs and snails. This one was perhaps 3 inches long or so. They can grow a fair bit longer than that. Here is a passage from Bill Rudman’s site:

Their most unique attribute is their method of feeding. They have lost their radular teeth and have developed the oral veil into a large veil or “fish net” which they use to constantly scan the substrate as they crawl along. When the sensitive papillae on the inner edge of the oral veil touch a small crab or crustacean the edge of the veil is rapidly contracted, trapping the prey, which is then ingested. Some species of Melibe, but not this species [viridis], harbour zooxanthellae in their bodies.

That last point is especially interesting. When I singled out the Blue Dragon, years ago, I learned that they are fairly special among nudibranchs as they capture and retain tiny photosynthetic partners in their bodies. They are sometimes called “solar powered sea slugs.” The same is true of Melibe, though not M. viridis. In both cases, lab work has shown that the slugs do get real benefit from their partners. This is not a common trait in nudibranchs. And Melibe and Pteraeolidia don’t look especially similar, but both look very weird.

Here is a close-up of the Melibe’s head. 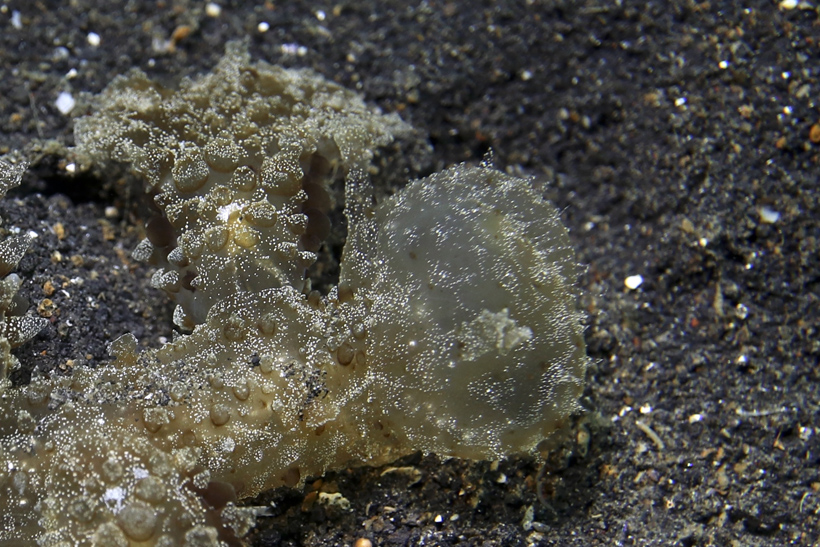 I also took some video:

And this one, Melibe colemani, rare and much-prized by spotters, is absolutely stunning.

* Thanks to Gary Cobb and Terry Gosliner for confirming the ID.

From: Burghardt and Wägele, “The symbiosis between the ‘solar-powered’ nudibranch Melibe engeli Risbec, 1937 (Dendronotoidea) and Symbiodinium sp. (Dinophyceae),” Journal of Molluscan Studies, 2014.

More detail: “Melibe engeli, in contrast to other previously studied ‘solar-powered’ nudibranchs, does not obtain its symbionts by feeding on prey that house Symbiodinium, but as by-catch from the water column.”

From a paper about Blue Dragons: “The Symbiodinium occurring in Pteraeolidia ianthina are viable, and they respire, photosynthesize and multiply in situ (Hoegh-Guldberg & Hinde 1986, Waegele & Johnsen 2001). The nudibranch receives up to 50% of the total carbon photosynthetically-fixed by each Symbiodinium cell via translocation (Hoegh-Guldberg & Hinde 1986). Studies by Kempf (1984) show that starved P. ianthina kept in constant light lost weight more slowly than those in the dark. The nudibranchs maintained in the laboratory with light but without additional food sources survived for up to 192 d (Kempf 1984).”

Another page about M. viridis.

And while we’re doing weird, this just appeared on Instagram.

This entry was posted in Nudibranchs, Symbiosis and tagged melibe, nudibranch. Bookmark the permalink.