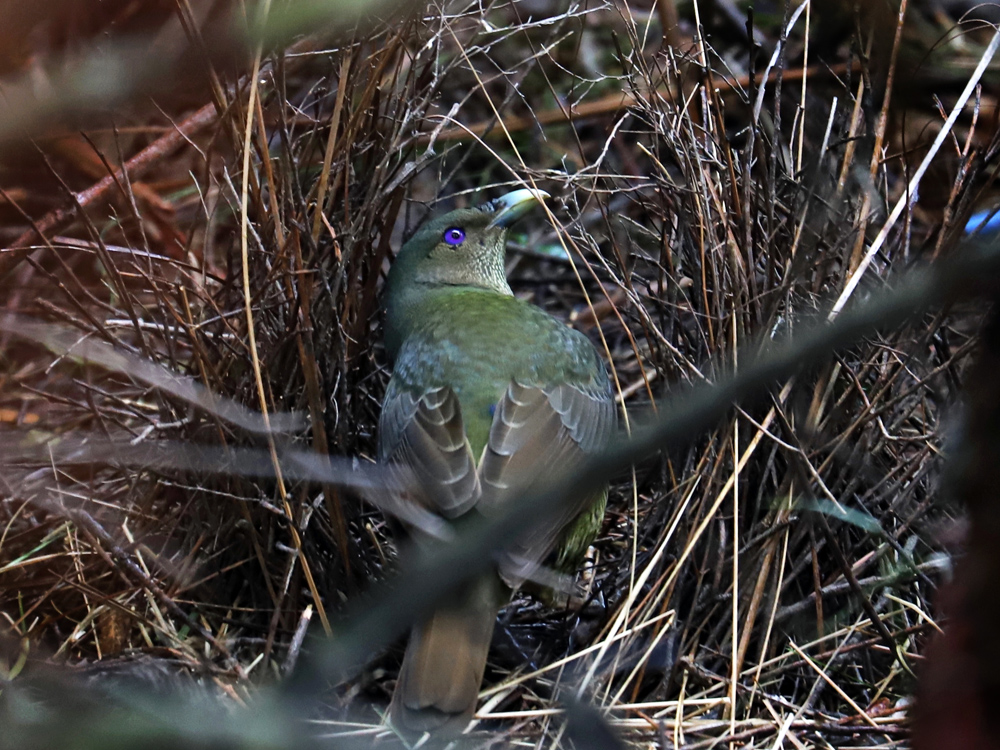 A few weeks ago I was out walking and heard, from some undergrowth, a peculiar sound – a sliding coo – that I’ve learned is one of the calls of a Satin Bowerbird. I stopped, peered in, and saw, for the first time, a bowerbird constructing a bower.

A bower tends to have a pair of gently curved parallel walls, made from twigs and stems of various kinds. The twigs are placed and adjusted carefully, and, I read, a “mixture of chewed vegetable matter and saliva” is used to paint the bower’s walls. (I think I saw this painting going on and did not realize what it was.)

This bird is a young-ish male (he has not yet taken on the blue-black coat of mature males). They decorate the area around the bower with found (stolen) objects, especially portable pieces that are bright blue – bottle tops, clothes pegs, and the like – and court visiting females there. When they display, they use every device at their disposal – the decorations, their plumage, a rather intense dance, and song.

“The Bower” (or Fairy Bower) is also an informal name for one of the dive areas at Cabbage Tree Bay, in Sydney, a seasonal mating area for Giant Cuttlefish and the site of countless dives and snorkels I’ve done over the last 15 years. I’ve been watching this newer, more terrestrial bower for a few weeks now and will write a couple of posts. As with the galahs, I’ll keep things fairly chronological.

It’s not easy to convey the overall scene in a photo, as the bower is in a small clearer patch within a tangle of bushes and ferns. Zooming out just a little: 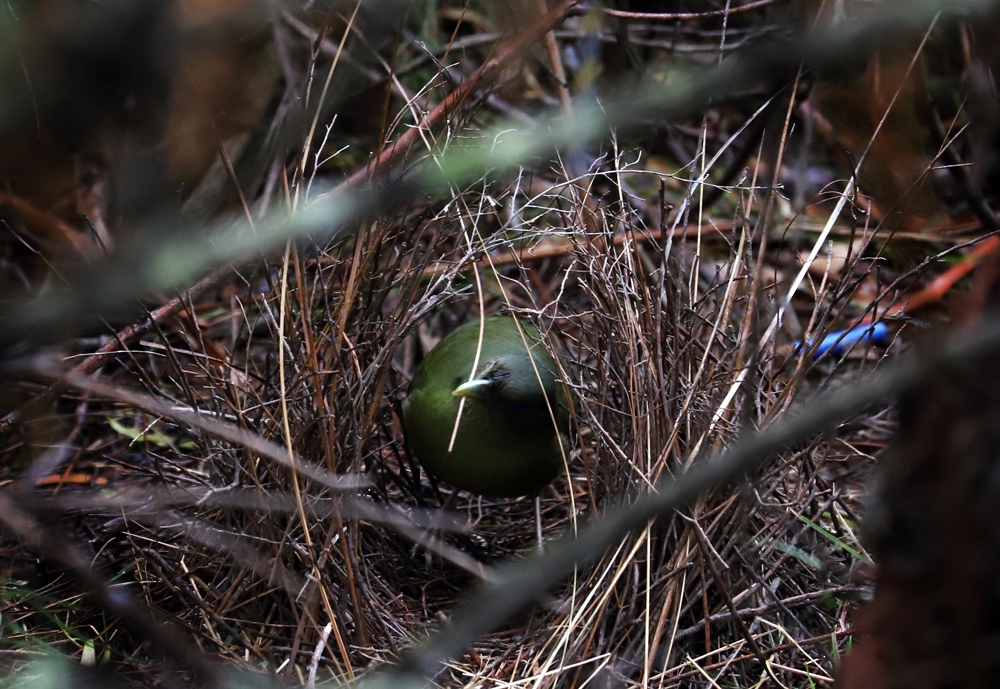 Here is a frame from one part of the bowerbird’s courting display – dramatic, staccato, repeated: 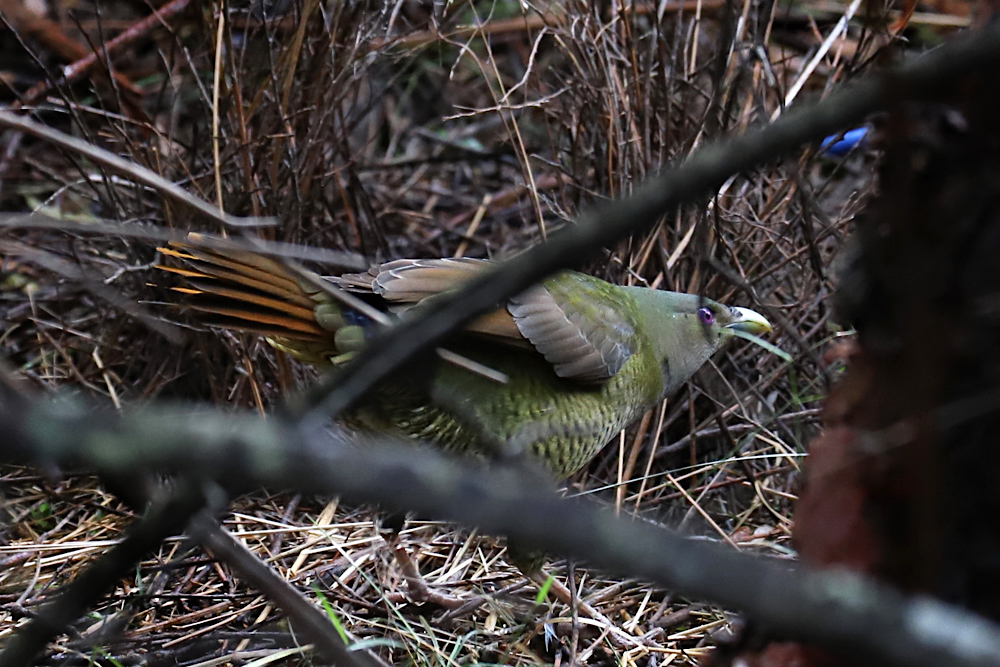 To get to the next point I have to give a bit more detail. These photos are all from day 3 of visiting the bower. The first day I had not brought a proper camera; the second has shots that look a fair bit like this. On day 2, when we got to 3.45 in the afternoon, the bowerbird stopped building, stopped displaying, and flew off to some large trees across a nearby street. (This whole scene is semi-suburban, but near a lake.) On day 3, just on five minutes to four, he clocked off again – it did look just like that; clocking off for the day. I stepped back from my vantage point and was about to head off, but then saw that another bird – smaller, with some paler feathers – had come in and had set himself up in the bower. The gap had been just a few minutes. This other bird did not mess up the bower (as has been documented in the scientific literature) but started tending to it, maintaining or improving it, as far as I could tell, with twig placement and perhaps some painting. And this bird, about ten minutes after he’d come in, did a courtship dance of his own. (Hopeless photo, but it was clearly the same dance.)

The whole affair gave the impression of a young guy hopping into an older guy’s fancy car – a convertible – when it was left unattended, to show off.

Here is the reason I’m going into detail about this. The usual way bowers are described in the literature (which I’ve just started reading) is as a product, and a kind of extension, of one particular bird. It is part of that bird’s display and courtship apparatus – an “extended phenotype,” to use Richard Dawkins’s term.* There are papers about the ways that female bowerbirds assess both the appearance of male birds and the quality of their bowers, when making mating decisions. Research in this area is very careful (with banding of individual birds, and so on), and I’m not doubting their claims about the usual situation. But in the case of this particular bower, my impression at this point is that there’s not much ownership at all. Looking back, the bird on day 2 also looks different from the earlier bird on day 3, though he might be identical to the later bird on day 3. I think two different birds, though perhaps the same two, were using the bower at different times on day 4, too. And so on.

A few conjectures: Assume it’s true that good bowers are attractive to females and take some effort to build. Then a lower-quality male who comes across an unused bower has good reason to make some use of it – to jump into the convertible, show off in it, and give it a bit of polish, too. If you are able to maintain a higher-quality bower, on the other hand, you have no reason to spend any time around a lesser one. This would suggest a “sneak” situation. Alternatively, males might tolerate other males who are relatives borrowing their bower. The larger male who “clocked off” at the end of day 3 might just not care about other birds jumping into the cockpit after he’s gone, too. He might tacitly assume that they are not likely to take actual matings away from him, given their quality, and he has to get some rest and food some time. (Thanks to Katherine Preston, botanist with an ornithological bent, for discussions of all this.)

I wanted all that text in together; here are photos in support. The first is the second day 3 male doing some twig work: 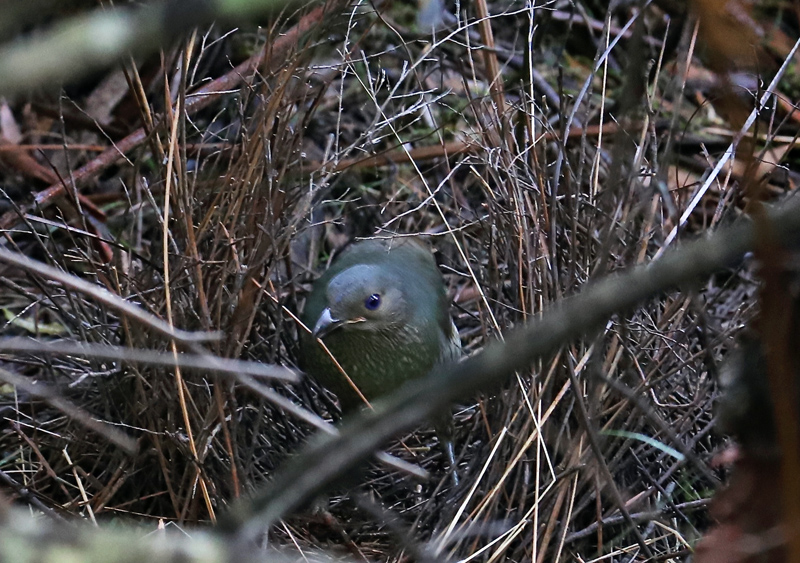 Here he is doing what might be some of that saliva-painting: 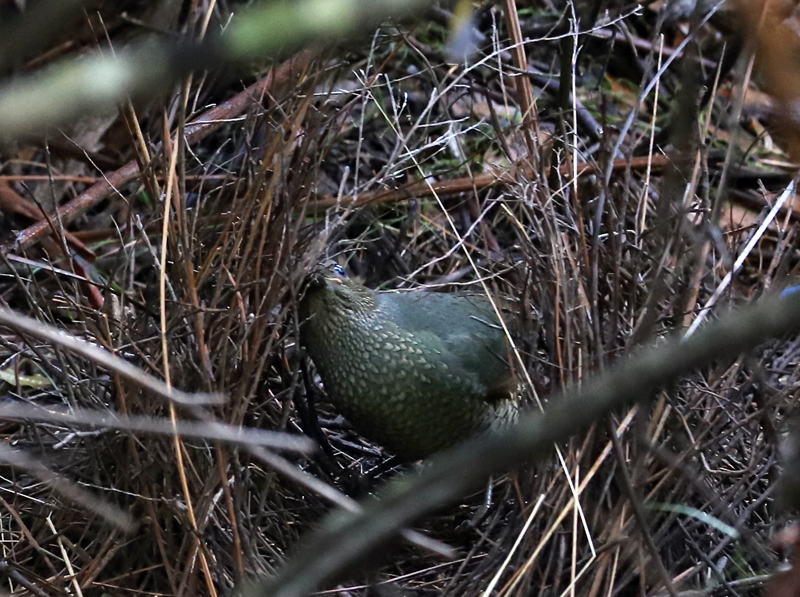 The feature that seems to reliably distinguish the earlier day 3 bird from others is a darker area that looks a bit like an injury, right at the top of the beak where it meets the head, right of center. (See the photo at the top and here, for bird 1, and then compare to this one and this one, for bird 2.)

I can see that this is going to lead to me spending quite a few hours trying to tell individual bowerbirds apart in photos – just when I was taking a break from spending hours doing that, with great difficulty, in endless murky video of octopuses. The bowerbird theme will be continued, then, as I continue to visit them. And we’ve not even started on what they do with found decorations and color.

The scope for digressions and endnotes is endless.

“Male satin bowerbirds preferentially decorate their bowers with blue feathers, flowers, and berries, as well as small mammal skulls and other bones.” From here.

* “Extended Phenotype”: Strictly, Dawkins associated this with a gene, not with an organism. The phenotype of a gene is all its systematic downstream effects, given the contexts in which it is likely to find itself, and this includes ones that “extend” outside the bodies of the organisms housing copies of that gene. The term has more often been used since then for extensions, outside the usual skin/shell boundaries, of an individual organism’s phenotype, such as a bird’s nest.

This entry was posted in Birds, Communication, Vertebrates and tagged bowerbird. Bookmark the permalink.