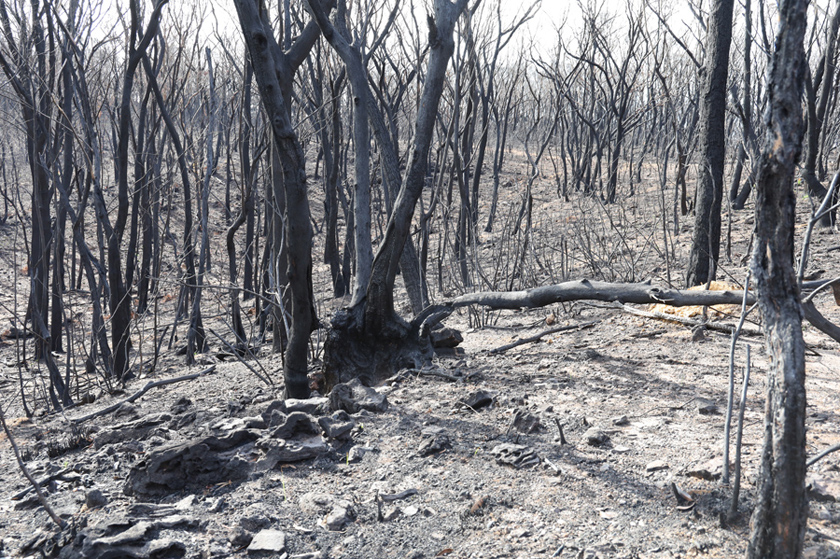 I set tonight aside to write a post about the Australian fires, beginning with the welcome fact that those fires are now receding, from our area at least, and it’s possible to take stock and think about things in a calmer and less smoke-choked way. It seemed that we were coming out of the hardest period, as many areas have had decent rain for the first time since winter. Though I knew it was probably optimistic, with at least four weeks of the fire season to go, it seemed we had turned a corner.

Today, though, was another brutally hot day in the mountains, hotter still down below – 45 degrees (113 fahrenheit) not far from here. Early this evening a fire a few miles away jumped into life, billowing smoke and adding beautiful but entirely unwelcome colors to the sunset. Just as quickly, it was being handled with helicopters overhead. A dead stillness in the air has helped. Further south, the revived fires look more vicious.

The season hasn’t passed, but it will. When it does, in a month or so, what will happen? Does this summer mark a historic event, a shift in how Australians see our relationship to the country, a shift that might be reflected in action? It is hard to say, but I think it might; I think everything will continue to seem different. First, it will be a long while before we lose a sense of foreboding in relation to the countryside. I drove last week along an untouched forest I have driven along any number of times, and that has burned before in my lifetime; nonetheless it felt different now. The months of drought coming out of winter, and then the long runs of extremely hot days, seemed to change the land. When I was growing up, days over 42 celsius were extraordinary. Now they are almost routine. I walked out today to get a photo of the nearby fire as it grew, climbing a little way into the gully beyond our garden. Despite the rain, a series of oven-like days have sent us back into a bad place. There was dry fuel everywhere. I felt like I was walking over an unlit barbecue. 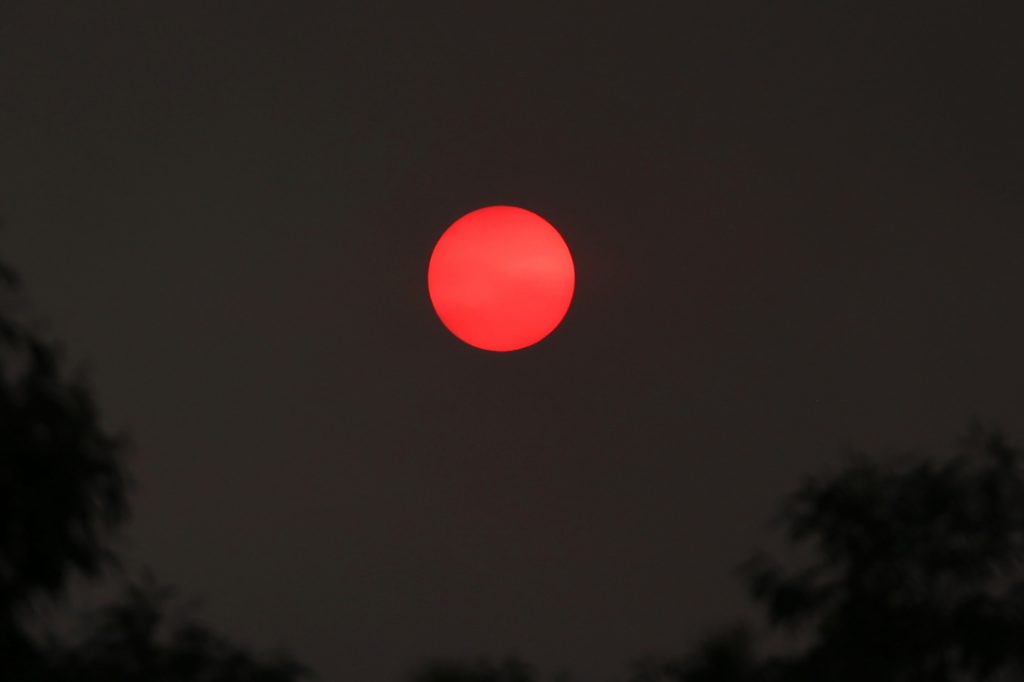 That photo was taken from the garden last month: the sun at about 7 pm, during the worst weeks for heat and smoke.

The feeling of threat won’t go away soon, and also, for me more strongly, the sense of a failed relationship to the country, a failure on our side, this feeling made almost unbearable by pictures of koalas and other animals, injured and lost.* We have all this power, all this smartness, and this is where it has brought us, along with everyone else living here.

My previous post on this site was my first one entirely about climate change. I supported a technological approach to its solution, and also expressed a degree of optimism. For the particular case of fire-prone Australia, I am a bit less optimistic now. Does this change my sense of what should be done? 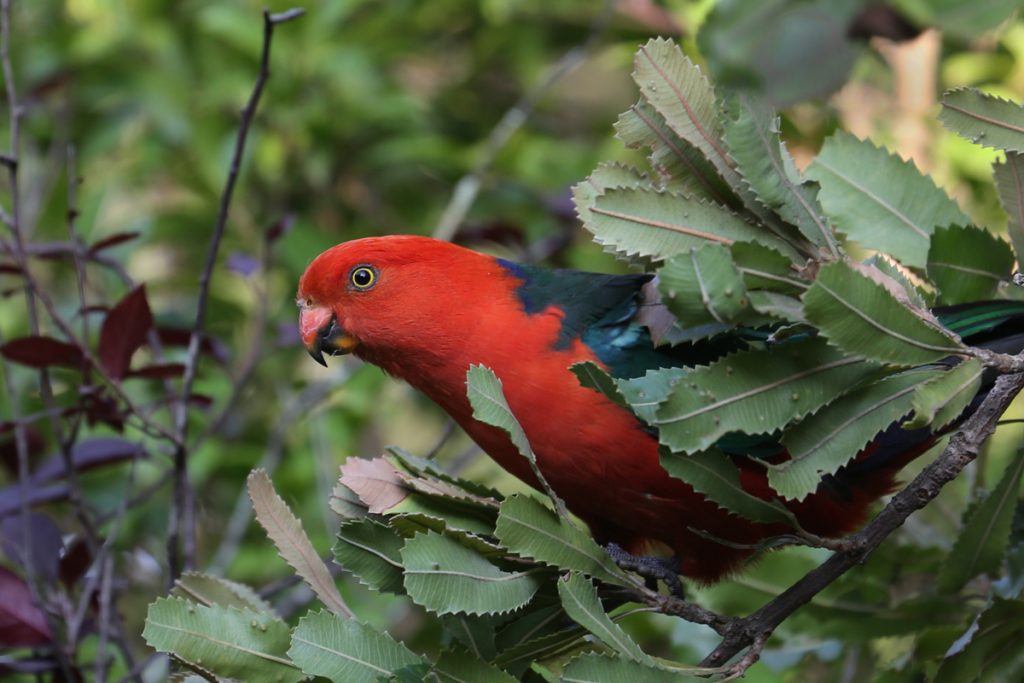 Discussion here is still impaired by the erroneous thought that by reducing local emissions, we can make our own climate better. That is not true, and it still seems inescapable that an actual solution is most likely to come from innovations making it rational for high emissions countries (such as China and the US) to modify their own behavior. Australia makes a tiny contribution to emissions, but there is still a reasonable case for changing what we do. A nightmarish absurdity is seen in a situation where Australia is one of the recalcitrant countries, one of the unhelpfuls, on this issue. Australia is a very rich country now, especially as measured by median income.  It has every possible advantage on the economic side, and many options. Australia is also, as the summer has shown, unusually vulnerable to climate change. Droughts and high temperatures are bad everywhere, but it’s not true that everywhere they yield a fire map like this (screenshot today). Given the combination of wealth, options, and vulnerability, the madness of a situation where we are in every sense part of the problem – unwilling to make minor sacrifices and impeding international agreements – is acute. If we won’t change our behavior, how can we expect others to?

Part of the point of the preceding post was that we can’t realistically expect high-emissions countries to change their behavior much, until the technological landscape changes. But there’s something that might be done here that does go beyond the symbolic.

Australia, as conservatives continually point out, contributes almost trivially to overall emissions.** It is not so trivial in relation to coal. Australia is the largest exporter of coal. Australia also exports a lot of natural gas. The fuels are burned elsewhere, but they originate here. Some comparisons make the consequences vivid. The Guardian reported on a University of NSW study finding that the carbon emissions due to Australia’s ten largest fossil fuel producers are “equivalent to that from about 75% of global air traffic.” A report for the Australian Conservation Foundation found that if you add exported fossil fuels to domestic use, Australia’s carbon footprint “is equivalent to the total emissions of Russia, which is ranked the fifth biggest CO2 emitter globally.” Our total contribution is far from trivial.

Neither major political party in Australia wants to change our coal export policies. Many (not all) of the parliamentary districts where coal jobs are important are not much affected by the fires. But if Australia was going to meaningfully lead, this would be a way to do it – to phase out coal exports, as well as reducing local emissions.

What makes all this especially acute is an everyday scene local to the area from which I write (and where all the photos were taken). A railway line from Lithgow runs over the mountains along the highway, close to the firegrounds, and along that line travels an intermittent procession of enormous coal trains, heading to the coast and its ports. There seemed to be few of these trains during the height of the fires; I don’t know if that was because the railways had problems, or having coal trains rolling past smouldering fields seemed too much even for us. Now they seem to be building up again, trundling down the hill with the materials of our ruin. 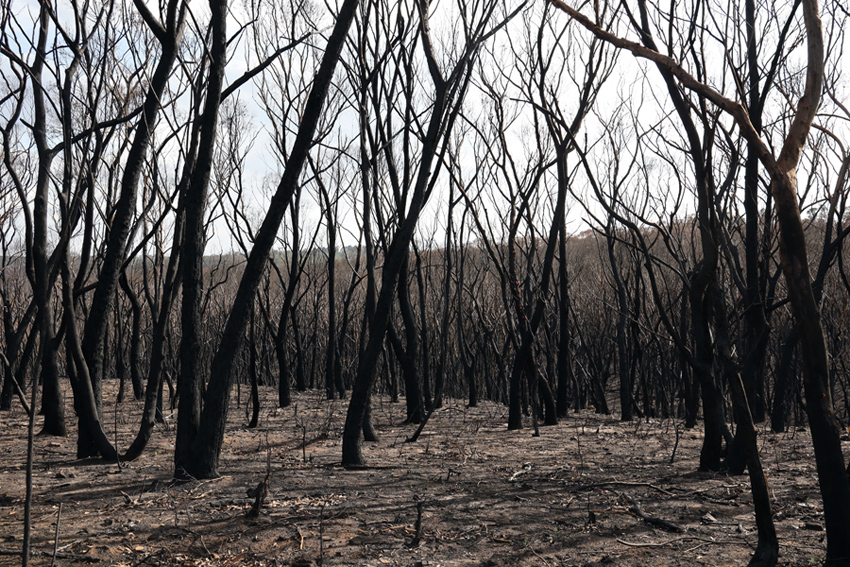 A couple of good articles reflecting on the summer: here, here, here.

* In this consideration of our ‘relationship’ to the country, what should we make of the indigenous side of Australian culture and history? I want to think about this some more before writing.

** The journalist Paul Kelly, who writes for the Murdoch-owned Australian but who often has reasonable things to say, wrote a couple of days ago, about the conservative Prime Minister’s policies:

Morrison’s position is founded in common sense and practicality. It should be a saleable proposition given the reality that with only 1.3 per cent of global emissions Australia, while it has a responsibility to contribute, cannot shift the world’s greenhouse gas dial.

It does not look quite the same when we say: Australia produces about 7% of all coal mined worldwide, nearly a third of coal exports, and our fossil fuels put as much carbon into the air as Russia.

This entry was posted in Environmental. Bookmark the permalink.