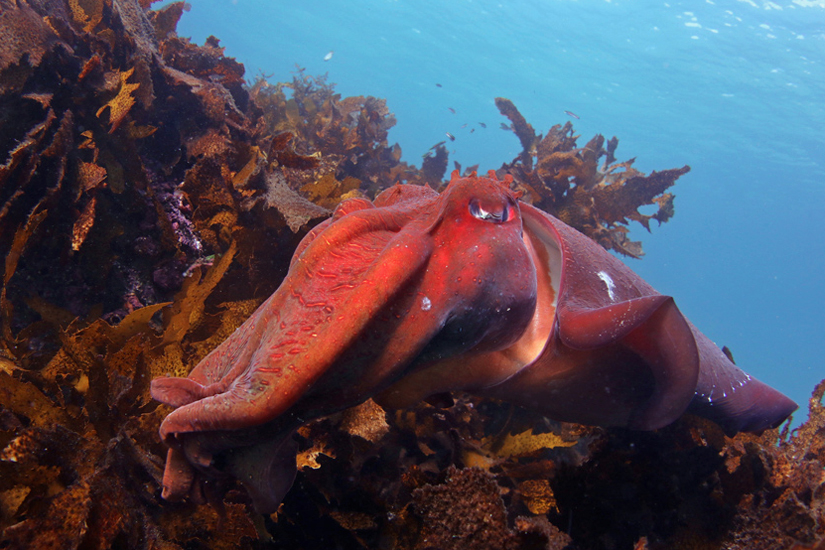 The animal that initiated my ongoing projects around marine life, a bit over a decade ago, was the Giant Cuttlefish, Sepia apama, especially those living in Cabbage Tree Bay, north of Sydney. More specifically, the part of the bay called “Fairy Bower” is where I’ve spent more time in the water than anywhere else. These months, April through July, are the peak time each year for giant cuttlefish at the Bower – it’s the mating season. Years vary, and this has been a good one.

The photos here are from the first weeks of May. I’ll do another post with animals from the last part of the month, before some tempestuous weather set in.

When I am in the water a lot I start coming across the same individuals. They are most reliably recognisable by marks and scars, but some also have idiosyncracies of behavior, color, and display. All the photos here except for one are shots of a male cuttlefish who had a behavioral quirk. The two “first” arms of the animal, at the top in the center, are the ones most used in displays. This individual, in a way I’ve rarely seen before, liked to move those two arms in a sideways, left-to-right pattern, a sort of sway or wave. You can see the motion in this photo: 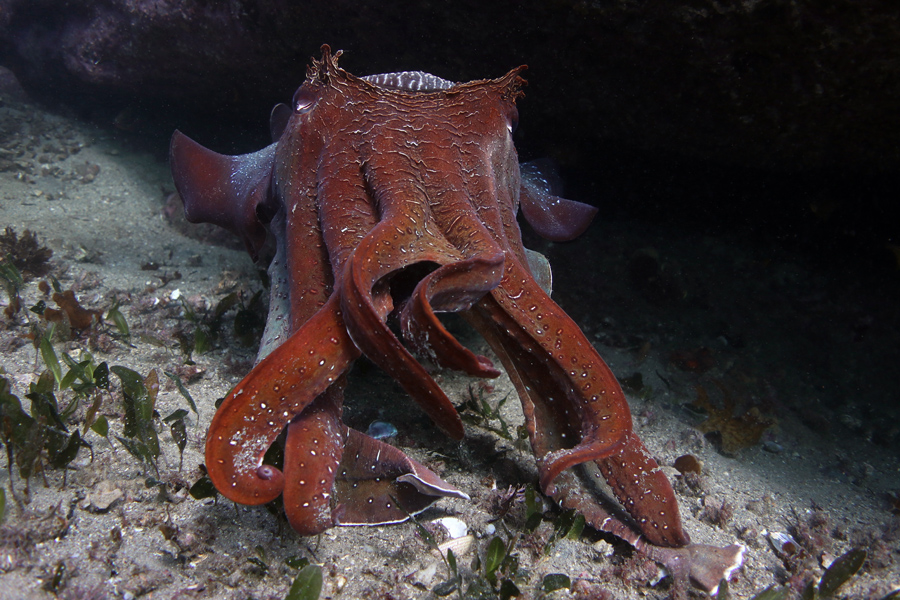 … and in this one below. 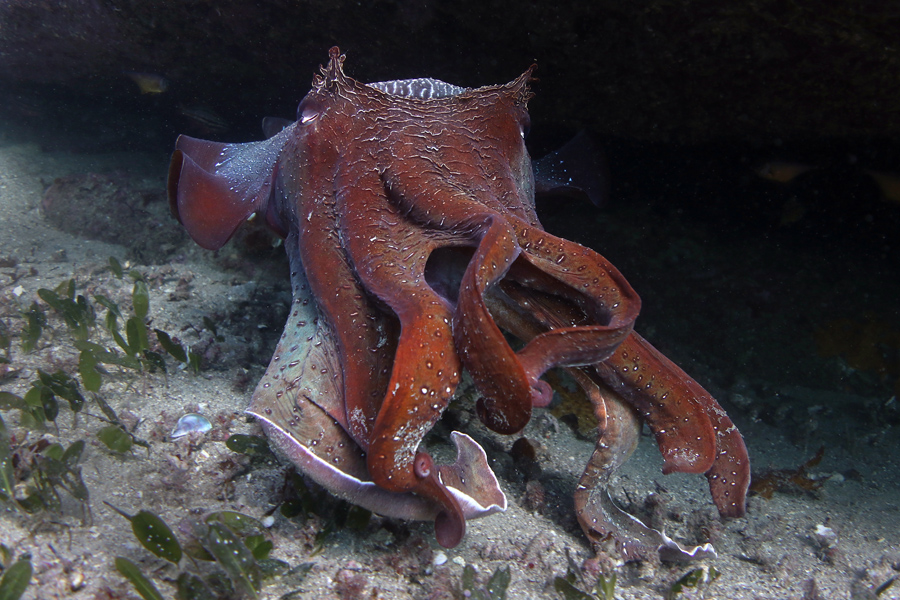 Sometimes I’ve wondered if I could identify an individual over days or weeks based on these quirks, but I assume this would not be reliable, so reidentifications are always corroborated with a mark or scar. This guy, the Waver, had a small injury on the left side of his body, about three quarters of the way towards his head. You can see it in the photo at the very top, and in the one below. The shot below also shows that he had other moves in his repertoire along with the horizontal wave. 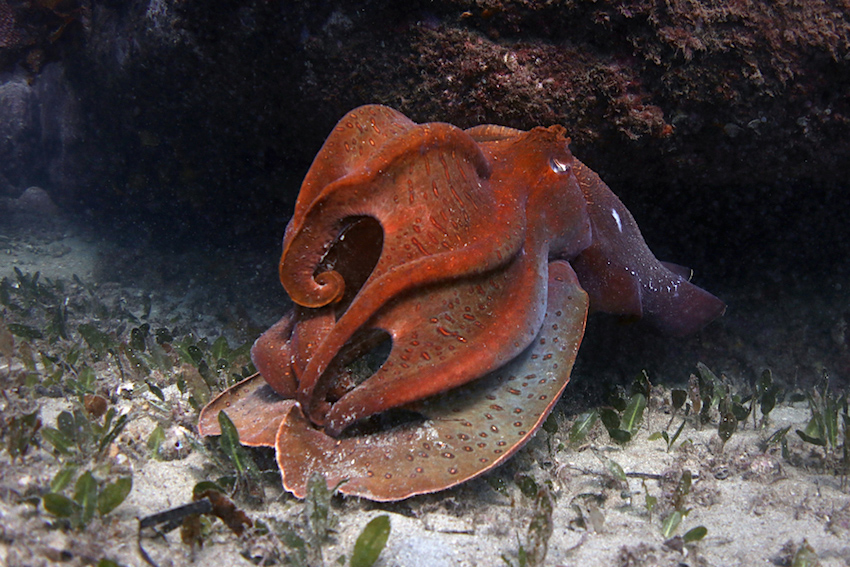 The top photo is from May 11, and the others are from May 9. Here is the Waver out on patrol. Those skin-folds (papillae) behind his eye are a bit unusual in their forward-pointing orientation. 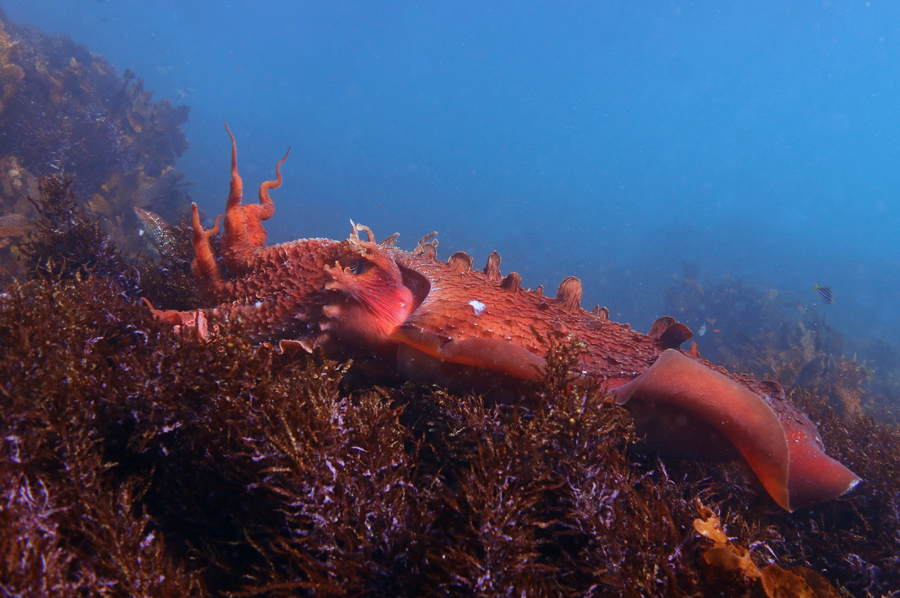 The dive the next day was interesting as a different cuttlefish was occupying the den favored by the Waver (3rd photo above) and a Wobbegong — a decent-sized shark — came in and supplanted the cuttlefish in the den. The Wobbegong was not a huge one (they grow very big) but at least two or three times the size of the cuttlefish, and a dangerous animal to anything much smaller. Initially the cuttlefish was not much inclined to give up the den – it shifted a bit and did some displays, rather than fleeing. The shark was in no mood to negotiate and just worked its way into the den. Eventually the cuttlefish gave up and made an irritated-looking exit, swimming past me very close.

This photo below is of another individual from those days (11th), one with particularly good colors. 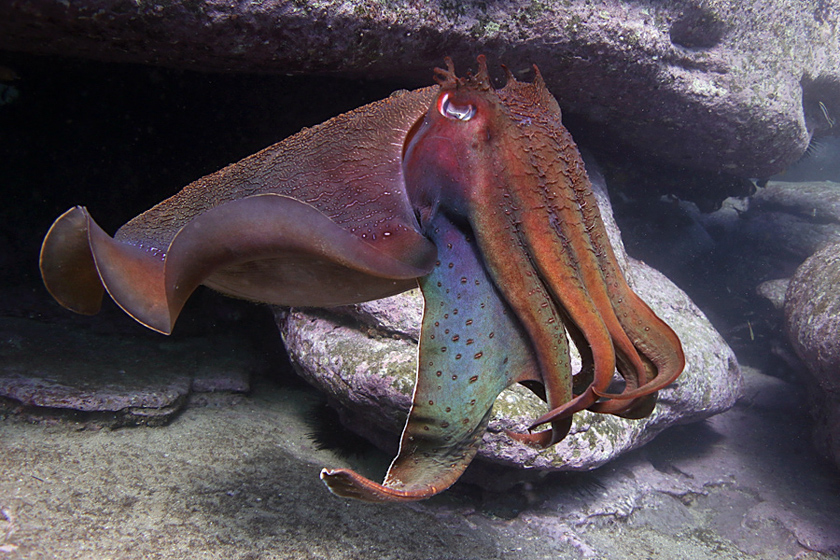 A week after these dives, Australia went to a federal election. The outcome was not as startling as the 2016 US election, but the two had a few things in common. The Liberal (conservative) party won in the face of all predictions.* It was not a good election from an environmental point of view. Climate change was discussed continually (the Guardian, the week before the poll, headlined it “the climate change election”), and judging from the numbers, the Liberal victory was due in part to resistance to Labor and Green party policies on climate.

I’ve come to think that the domination of environmental discussion by climate change is a major problem. In some contexts, people seem reluctant to recognize other issues as genuine and distinct from it; climate has become the environmental issue. But it is not the only issue, and it is by far the hardest to solve. It is the hardest because local action is nearly meaningless – local action only makes a difference insofar as it helps move us towards action on a global or near-global scale. In the case of many other environmental issues, local action is not just meaningful but sufficient to solve the problem. Particular bits of habitat can be protected, rivers can be kept running, extinctions can be prevented. When pessimism about climate change sets in, it leads to pessimism about all environmental issues. The problems are linked, but they are not the same.

Given its global nature, when the problem of climate change is presented as an emergency for this electorate at this time – as the left presented it last month in Australia – there is a good chance that people will not be convinced. If they vote the other way, as they did in this case, the result is not just more carbon emissions but more land clearing, worse protection of waterways, and a host of other bad decisions. I had a chat with Chris Lean, another philosopher, about this a few weeks ago. Lean put the point very well. Australia is responsible for less than 2% of the world’s carbon emissions. Australia also contains a fairly high proportion of the world’s total biodiversity – something around 10%.** The way we allocate our resources (financial, political, etc.) to environmental problems should reflect this fact. And although many local species will be affected by global climate change, there is a lot that we can do ourselves to protect them. Reducing the disastrous rate of land clearing is an example – a decision that is entirely up to us, not a tenuous international coalition. The marine reserve at Cabbage Tree Bay itself is also a small illustration of this principle on the positive side. It’s a tiny site, but a successful reserve, full of animals of many kinds. Keeping it safe is a local responsibility. The same is true of local sites all over the world.

I agree that we should work hard at the problem of human-induced climate change, a problem of great importance. What we should not do is allow that problem to overshadow everything else. 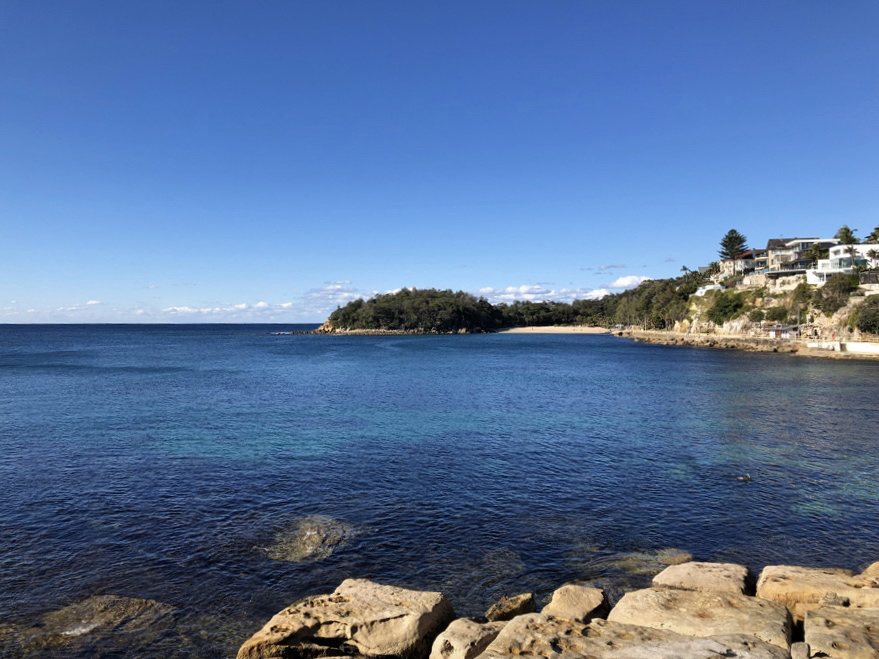 * A coalition of the Liberal and National parties, more exactly. These are center-right parties.

Australia accounts for five percent of the world’s landmass, 12.5% of chordate species, and almost 8% of all described plant, animal and fungi species (Chapman 2009). The majority of these species occur nowhere else on earth, with >85% of Australia’s plants, mammals, reptiles and amphibians being endemic (Chapman 2009). Australia is one of 17 ‘megadiverse’ nations (Mittermeier et al. 1997), and one of only two of these nations that is wealthy in economic terms (the other being the United States; World Bank 2017).

A recent scientific study of the effectiveness of spending money on biodiversity is here.

Thanks to Chris for these references. His overall view is the same as mine: “Of course we should invest in global warming but the skewed focus on it in local politics is much to the detriment of ourselves, our environment, and the world.”

This entry was posted in Cephalopods, Color, Marine life. Bookmark the permalink.