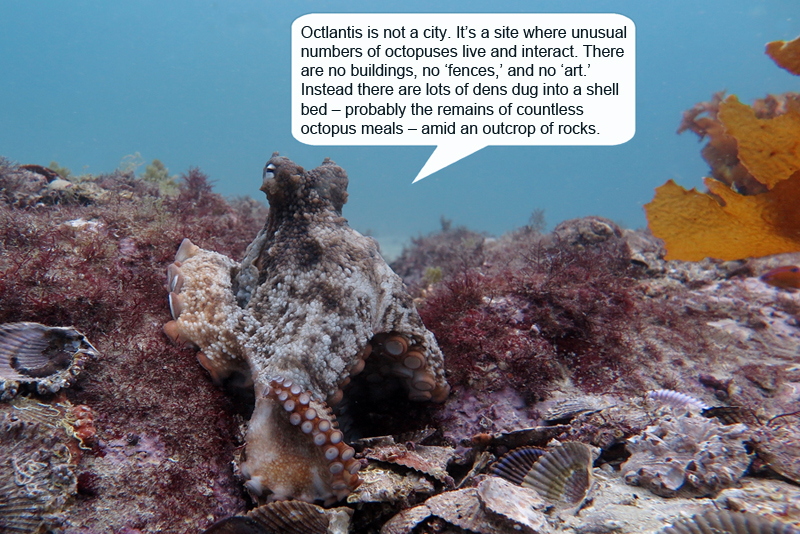 Last month our latest octopus paper appeared, describing a new site where octopuses live in unusually large numbers. We call the site, which was discovered last year, “Octlantis.” Soon after it appeared, the paper was picked up by the media, especially by popular science websites. Initially the stories were reasonably accurate, with just a little picturesque exaggeration, but some of them soon began to get out of hand. There are now articles about the site that claim the octopuses are “making art,” building “fences,” and engaging in a range of other behaviors that were not reported in anything we wrote. The episode has become interesting in itself, as it has gone beyond ordinary overstatement induced by the perennial charm of the octopus, and has become a snowballing or self-sustaining process, where the exaggerations in one story feed another story which embellishes things further, and so on. 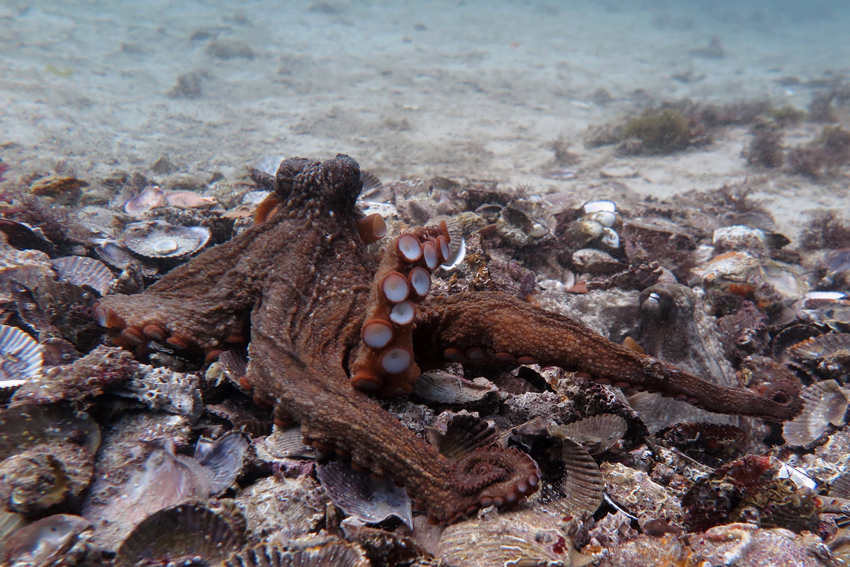 (Above are two Octlantis octopuses, the second on the right).

The chain seems to have developed as follows. The University of Illinois at Chicago, where co-author Stephanie Chancellor studies, put out a press release. This was done well and has no exaggeration. It was picked up by Science Daily and other sites. Then Science did a story about the paper. Again the story was fine, but it used the crucial word “city” in the title: “Scientists discover an underwater city full of gloomy octopuses.”

“City” is not a word we’ve used, but it may well have come from our nickname for the site, “Octlantis” – perhaps too evocative a choice. In any case, that is when distortions began to appear. A profusion of articles appeared that not only used the word “city,” but described the site in a way apparently inspired by that word, with a range of behaviors that in some cases are embellishments of what we saw, and in some cases seem to have simply been imagined.*

A week or so ago I was sent some text by a radio station before an interview, and was startled to see how inaccurate it was. I asked how it was written, and was pointed towards a popular science website that they used as a source. So the write-up by the radio station was at least two steps away, probably three steps or more, from an actual reading of our paper, and each step seemed to have taken the “city” idea and run with it further.

This next shot is not from Octlantis, but from Nelson Bay, yesterday, where an octopus (of the same species) decided I’d come a little too close to its den: 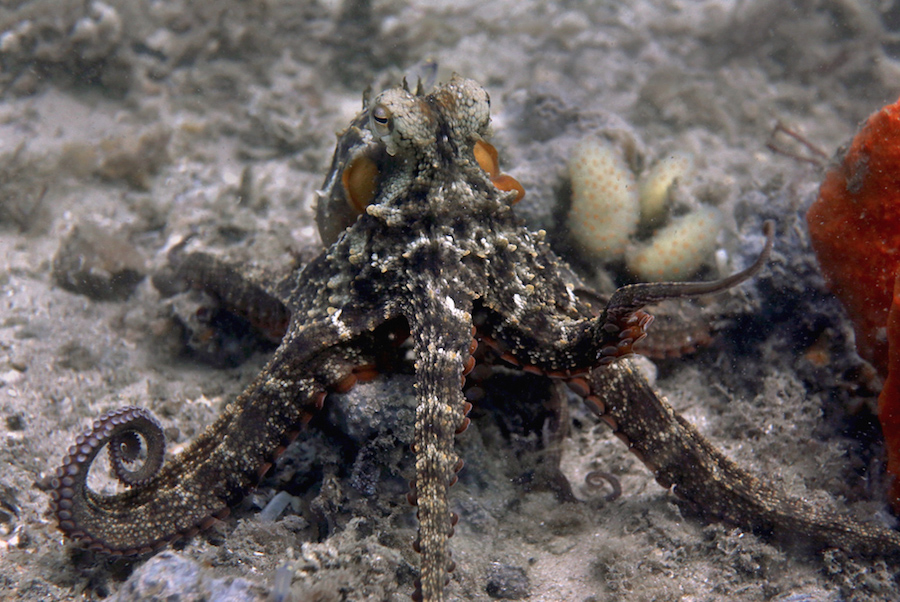 We are presently writing a couple of follow-up pieces that clarify the situation, and also ask the question: which effects of octopus behavior seen at the Octlantis site are effects intended by the octopuses, and which are inadvertent? I’ll link to these when they appear. For now, though, we want to emphasize some basics, and try to prevent further flights of fancy.

Octlantis is not in any sense a city. It is not a cooperatively built and maintained structure, designed to allow many individuals to live in close quarters. It is an unusually dense collection of individual dens, most of them dug into a bed of scallop shells. 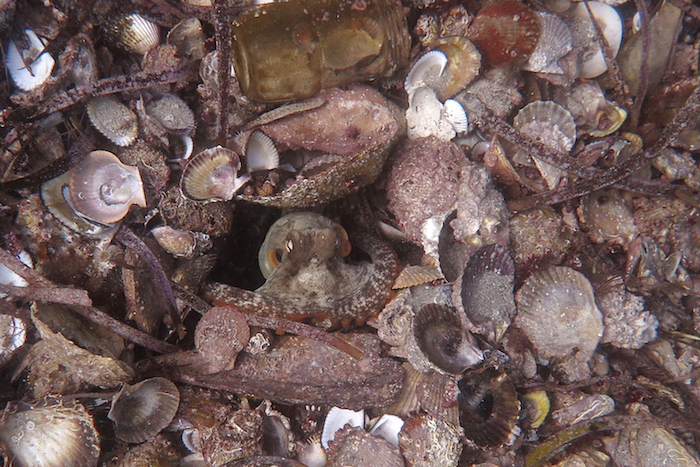 The shells are remains, we think, of scallops brought in by individual octopuses as food. The shells accumulate over time, and provide a better den-building material than the silty sand of the bay. As more shells are brought in, more octopuses can build viable dens at the site, and those bring in still more shells. There are a lot of fairly complicated behaviors at the site – lots of probing, displaying, and what often looks like a monitoring of who is around. We are presently trying to work out some of these behaviors. Octlantis is a remarkable site, but it’s not an octopus city.

* Here are some especially bad examples:

BigThink.com: “making art out of leftover shells, starting fights, tossing out roommates, and ignoring undesirable cohorts until they went away.”

Curiosity.com: “But when we say “city”, we mean “city”. Octlantians build their own structures from their leftovers, the shells of clams and scallops. They build fences to keep out their neighbors and protect themselves from the underwater elements under shell-tiled roofs.”

This is a higher-quality article. Fox News also did a story that’s not bad.

Here is this post’s Opisthobranch photo.

This entry was posted in Cephalopods, Octopus and tagged media, Octopus. Bookmark the permalink.