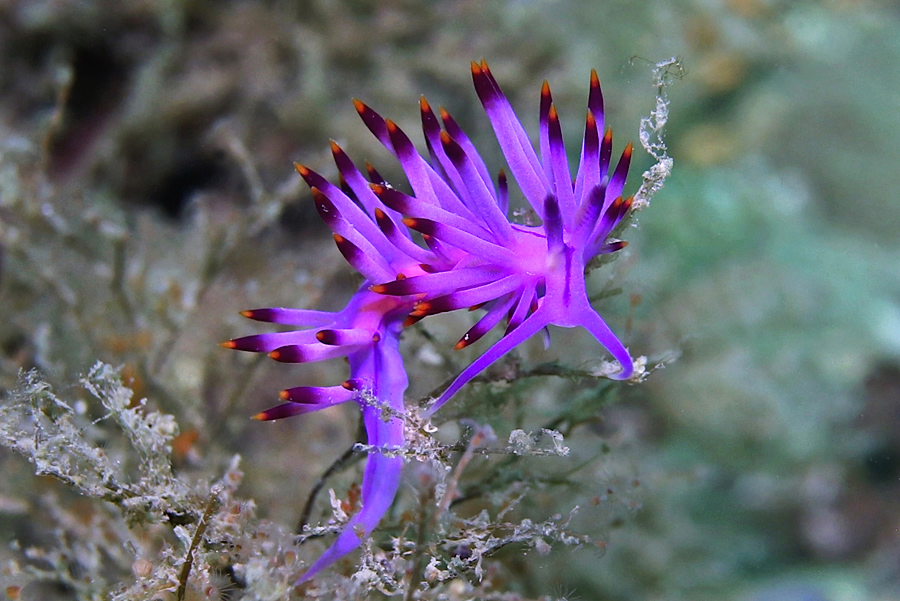 The purple beast, perhaps 5 or 7 mm long, is Flabellina rubrolineata, a nudibranch. It reminds me of the mythical Hydra. This post is photographic, breaking up some wordy and weightier ones about Peter Singer’s book Animal Liberation. In the photos below, the mythical Hydra will feast upon a non-mythical Hydroid.* 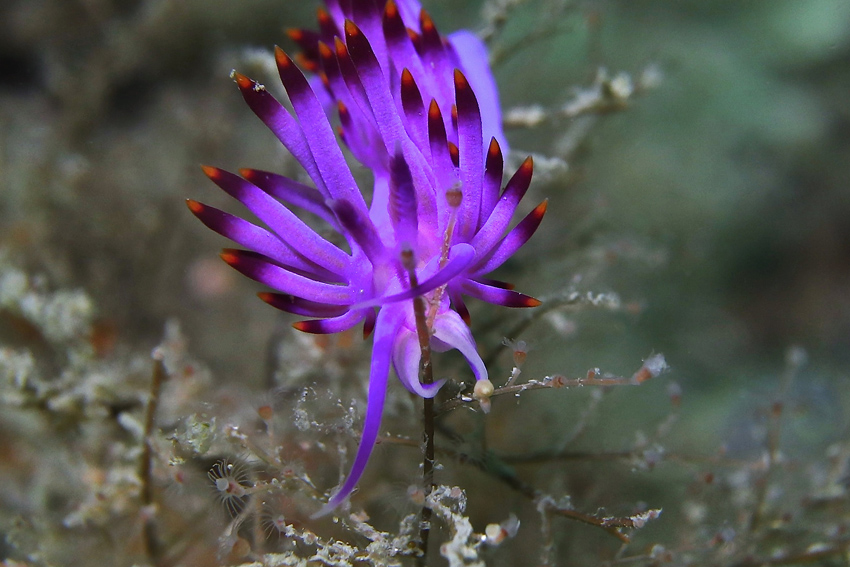 A hydroid of this kind looks like a flower on a long stalk, but it is an animal – a cnidarian, related to corals and jellyfish.

The flabellina wraps its mouth parts around it. 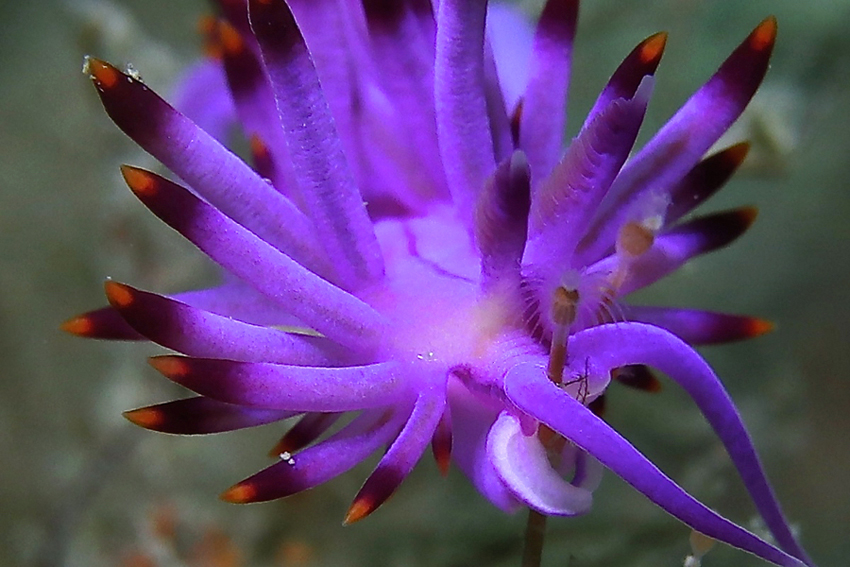 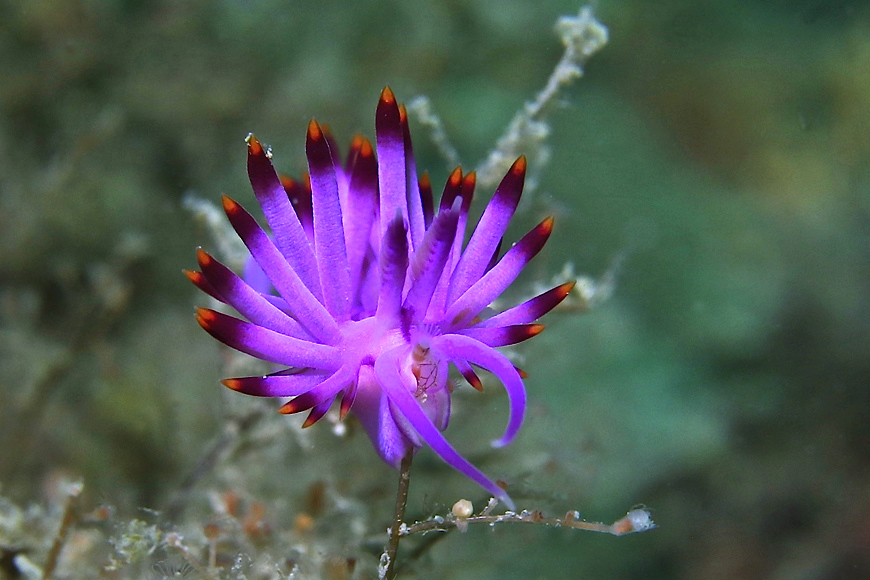 … the flower-like part is consumed, 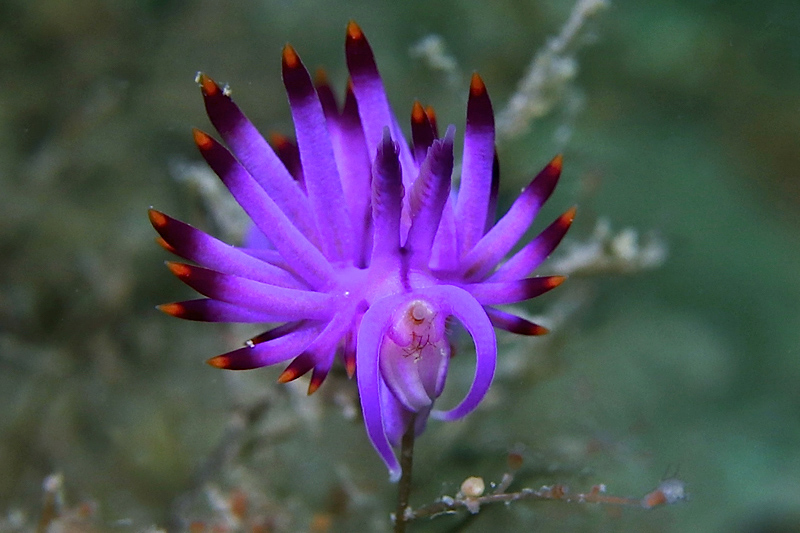 … leaving only the stalk. 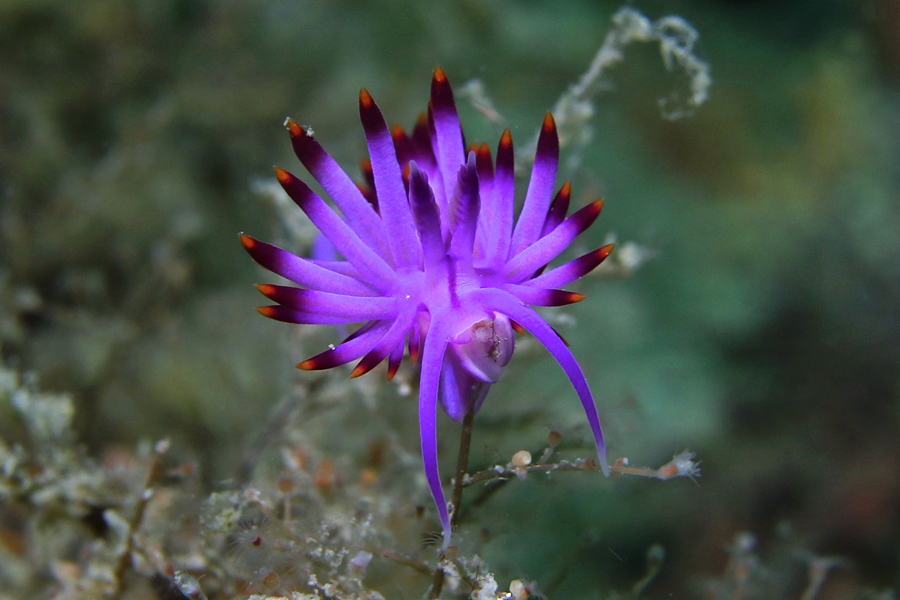 The previous post included a note about the ever-increasing pressure on Australia to end its indefensible “live export” trade, in which thousands of sheep and cattle are crammed into stifling ships to be shipped to the middle east or Asia to be slaughtered using primitive methods, if they survive the hell of the trip, on site. Pressure has continued to mount on the federal government, and the opposition Labor party has pledged to end the live sheep trade, at least, if it wins government. This is a small but real piece of good news. A recent poll also found that about three quarters of Australians, including a strong majority in rural areas, want live export to end. What some politicians appear not to realize is that this is not, for a lot of people, a minor question that will fade on election day when put alongside economic issues. Instead, it is an ongoing and undeniable source of shame for the country – no small matter for many voters.

Update May 18: A columnist in the Sydney Morning Herald, David Crowe, writing against an immediate end to live exports, says this: “Farmers who sell sheep for live export might get about $130 per head for an animal that has already produced wool for about five years. This could be $20 more than selling mutton on the local market.” These sheep are put through their nightmare for an extra $20? I can hardly believe it. And I can hardly believe that Crowe noted this fact to argue for a continuation of the trade.

* A non-mythical Hydra is also a hydrozoan, perhaps from the same group – I am not sure – as the hydroid consumed by the flabellina. I think the hydroid above might, along with non-mythical Hydra, be in the Anthoathecata. Guidance would be welcome (Eudendrium)? The hydroid is colonial. A helpful figure is here.

One Response to 62. Hydra and Hydroid