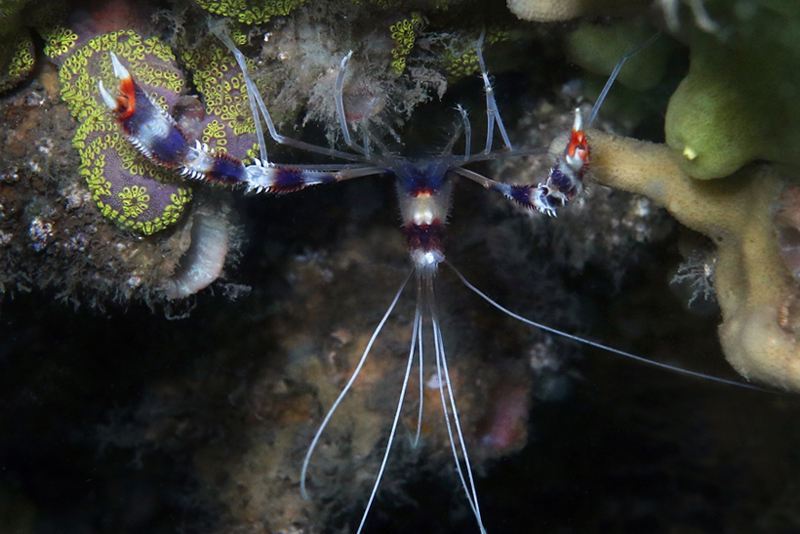 Above is a Banded Coral Shrimp, Stenopus hispidis, in one of several hundred flawed photos I’ve taken of this species over recent months. I’ve become interested in these animals and want to get a good shot, but part of what makes them interesting makes them hard to photograph. They are very active, with arms and feelers moving continually, so a fast shutter is needed. But those arms and feelers extend through space, forward and back; they very much occupy their dens, filling them with appendages, so the focus has to reach pretty deep. They like dark spaces, too, and have some near-transparent parts. All this, together with my preference for simple gear, makes them quite a challenge. I have countless photos with one problem or another.

The phrase in my title was used by Peter Singer in his 1975 book Animal Liberation, in an attempt to say where a line might be drawn between animals we should not eat (when we have other good options) because they can probably feel pain and hence deserve some moral consideration, and animals that probably can’t feel pain and don’t have interests of the kind we need worry about. He said that somewhere between a shrimp and an oyster is “as good a place to draw the line as any.” 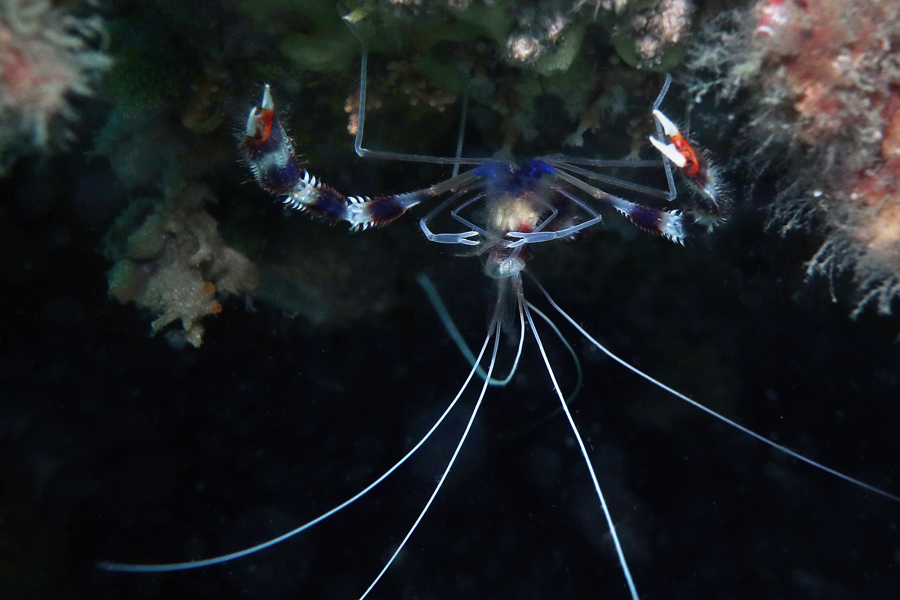 I am currently reading the most recent edition – the 40th anniversary edition – of Singer’s book. I’d read some, but not all, of the 1975 edition a long time ago. I’m finding the power of the book extraordinary, even after all these years of debate. The book has been updated, especially in its examples, but the basic ideas are familiar and have been assessed countless times. Yet still, in some passages, reading the book feels like being run over by a truck.

Singer takes a “utilitarian” approach to moral issues, emphasizing especially the avoidance of needless suffering. A lot then depends on who can suffer and who, in principle, cannot. A conference at NYU last year, especially the session I was part of, made some of these questions seem especially difficult. I and a few others gave talks trying to get a handle on the most basic kinds of experience, especially in invertebrates like crabs, bees, worms, and octopuses. Singer was there, and at one point in response to discussion he indicated his phrase from Animal Liberation as an attempt to mark a reasonable border. We’d probably be OK if we did not concern ourselves with the welfare of oysters, but it would probably not be OK to completely ignore the welfare of a shrimp.

In later editions of the book, including the one I’m reading, he was more even cautious  – we don’t know what’s going on inside an oyster, so it’s better not to eat them. In an email quoted by Christopher Cox in Slate in 2010, he was closer to the 1975 view – “while you could give them the benefit of the doubt, you could also say that unless some new evidence of a capacity for pain emerges, the doubt is so slight that there is no good reason for avoiding eating sustainably produced oysters.”

Suppose we assume, for discussion, a moral outlook like Singer’s. In the light of what we know now, how reasonable is that handling of the border? It looks pretty good, I think. The term “between…” has problems with it, which I’ll get to some time. But let’s set that aside and look first at the oyster/shrimp contrast. 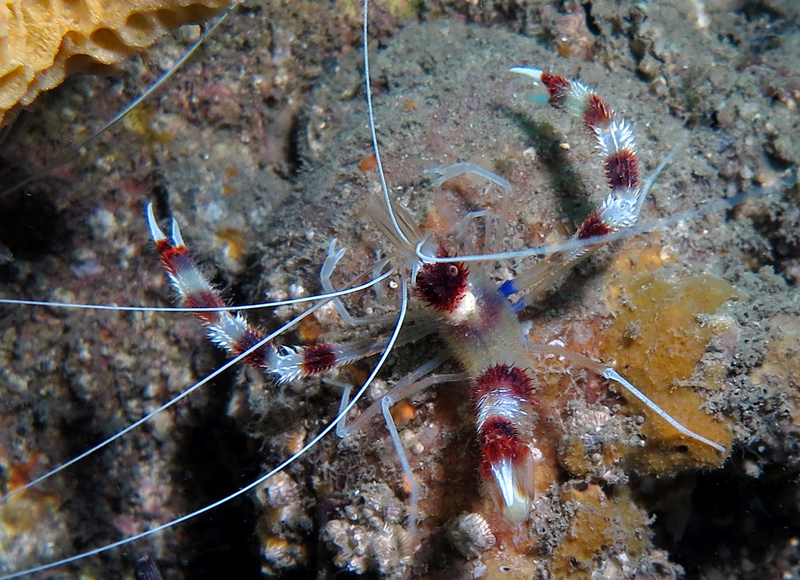 Shrimp are arthropods, along with insects, spiders, centipedes, and the like. Among arthropods, shrimp and some other crustaceans are starting to look quite special.* Those banded shrimp in the photos, for example, seem to have quite a lot going on inside them. If you’re careful with them, while diving, they will often come out and inspect you. This species is a symbiotic cleaner of larger animals – fish, eels, even turtles – so they are oriented towards useful but precarious relationships with others. They are monogamous and territorial. Here’s a bad photo of a pair interacting. (The one on the left is mostly upside down.) 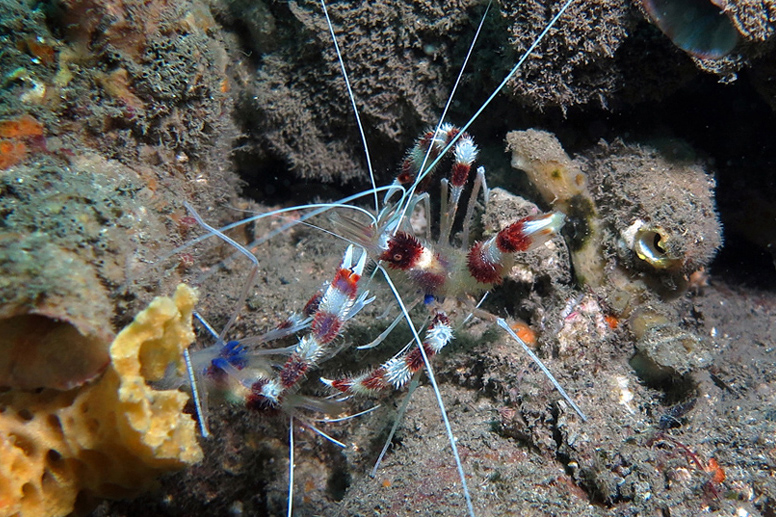 Not all shrimp live like this (and the “shrimp” above are really closer to lobsters in evolutionary terms). What is important in this context is not anecdotes but some recent experimental work, especially by Robert Elwood. Elwood has shown that although crustaceans like shrimp and crabs have fairly small nervous systems, the evidence for pain in these animals is surprisingly strong. Shrimp will groom and tend wounded areas, and those behaviors are reduced by local anaesthetics. Hermit crabs will abandon shells in response to electric shocks, but do so in a way that trades off, in quite a sophisticated way, quality of shell with strength of shock. The evidence for pain in crustaceans is good, and much better than the evidence for pain in insects. 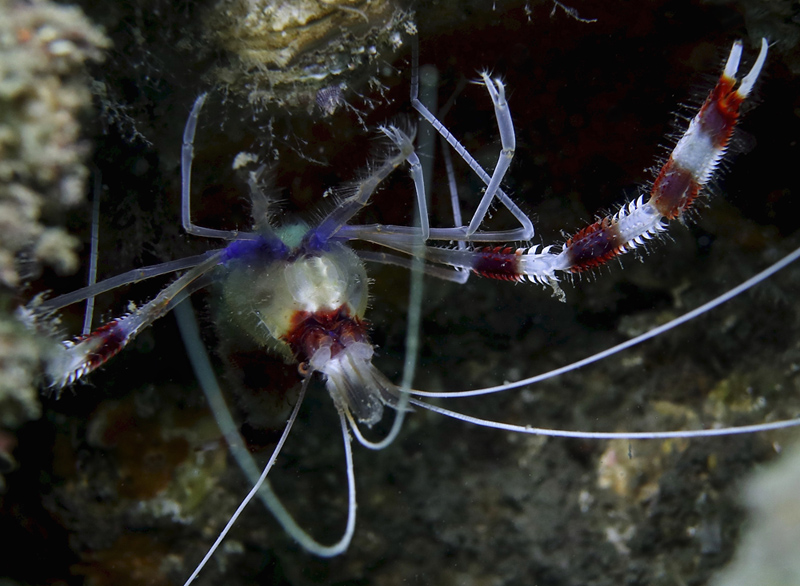 An oyster, in contrast, has a very small and decentralized nervous system. Whereas recent evidence pushes quite hard in the direction of recognizing crustacean pain, there is no such evidence I can find for oysters. It’s difficult, though, to find any work in recent years on oyster behavior. One reason is that even compared to other shellfish, such as clams and scallops, there is not much that oysters can do. Clams can dig and scallops can swim. Scallops and some clams have genuine eyes. Oysters may have some light-sensitivity, despite lacking eyes, and they have tiny ‘tentacles’ that are sensitive to various things. But their behavioral responses, as adults in shells, are very limited.† An oyster will not swim up towards you like a castanet, as a scallop can. As far as I can work out, oysters can do little more than open and close their shell, and make other adjustments to the flow of water they bring in. Their reproductive behaviors are simple, too. It is always possible to imagine a very simple system having rich experiences like pain – and imagine any very complex organism lacking them – but those acts of imagination are not evidence for much. There seems no role for pain in an oyster’s life – in the way there is for shrimp and crabs, as Elwood emphasizes.

Is it likely then that experience is at zero in an oyster? There is absolutely nothing it feels like to be one? One reason I hesitate about this brings in another theme discussed at the NYU conference, something I am thinking about a lot at the moment. A mistake we might make in this area is to think too much in terms of dichotomous, presence-versus-absence views of subjective experience. That might be a mistake, at least when thinking about animals. Instead, the presence of experience itself might be a more matter of degree.

Some ways in which there could be a gradient here are not hard to think about – you might think experience is either present or absent, and within cases where it’s present, there is a more-versus-less question with respect to intensity, complexity, or something like that. The more difficult options are those that challenge this way of thinking about the “low end” of the scale, and do so without falling into panpsychism. We might say: within simpler animals, some have internal goings-on that are more experiential, more experience-like, but there is no point at which this special thing – subjective experience – is suddenly present. It is hard enough to even roughly mark out this option, let alone develop or defend it. (At the NYU conference, Michael Tye argued that the options I am gesturing towards here are not possible at all.) All this would make it harder to work out what to say about the oyster, though perhaps it doesn’t make it harder to work out what to say about oyster pain. Some forms of proto-experience might not include a relevant analogue of pain.

In any case, in Singer’s shrimp (and other crustaceans), recent work has shown surprising complexity that is directly relevant to questions about pain. In oysters, not so. Shrimp are pretty clearly in the category where it at least makes sense to consider their subjective well-being, and oysters most likely are not (give or take the questions just above). Shrimp and oysters might also be special within their respective groups – crustaceans are better candidates for feeling pain than other arthropods, at least at the moment, and oysters are behaviorally simpler than other molluscs, even other bivalves. The area “between” shrimp and oysters is where the harder cases are, and not too many animals in that area are important as human food sources.

For me, the material above does not yet settle the question of what it’s OK to eat; it does not settle what relations we should have to animal lives and deaths. And while these questions about borderline cases are interesting, they are not nearly as pressing as questions about animals that are not borderline cases, like cows, chickens, and sheep.†† After I work through the last part of Singer’s book, I am going to grapple with those questions next. 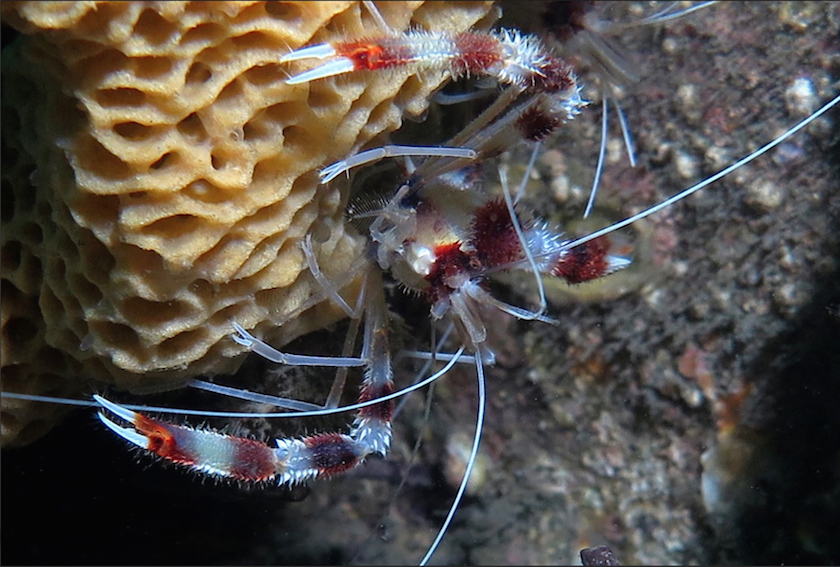 * The animals called “shrimp” form a non-monophyletic group (they do not comprise a single branch of the phylogenetic tree, but are collected from different nearby branches). The same applies to crustaceans. I am not going to worry about this, though it could matter if neural evolution went very differently on different branches that yielded animals we call “shrimp.” This Wikipedia entry is helpful. The banded shrimp in my photos are in the Stenopodidea, closer to lobsters and crabs than to other “shrimp.”

** The advocacy group Crustacean Compassion has put together an informal summary of work in this area.

† An obvious experiment worth doing with oysters would be a classical (Pavlovian) conditioning experiment. Classical conditioning is very widespread in animals, including other mollusks (gastropods, cephalopods). There is even a report in an anemone. I can’t see a record online of someone attempting this experiment with an oyster, but it ought to be straightforward. One would pair some initially neutral (but perceptible) stimulus X with some other stimulus Y that causes the oyster to close its shell. The aim is to see whether the oyster learns to close the shell in response to X, because of its predictive relationship with Y. Choosing a suitable X might be the hard part.

†† An especially pressing question in Australia at the moment is the continuation of the truly nightmarish “live export” trade, in which thousands of animals are crammed into stifling ships to be shipped to the middle east to be slaughtered, if they survive the trip, on site. The latest horrors, revealed a week or so ago by Animals Australia, may be turning the tide of opinion at last.

Update: The Guardian has been excellent in its coverage of the recent (2018) live export scandals. Reverse chronologically, some good articles are here, here, here, and here.

2 Responses to 61. Somewhere Between a Shrimp and an Oyster