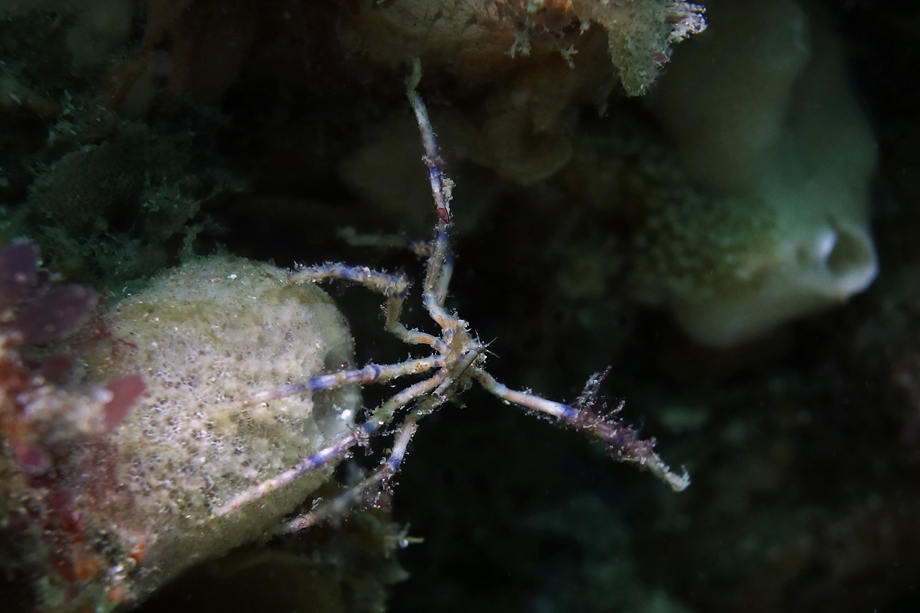 A brief episode, occurring on a tiny scale.

The spider-like animal in the middle of the photo is a blue-knee sea spider. Sea spiders are not exactly spiders, but they are probably moderately close, in evolutionary terms, to land spiders – arachnids. This species is common and the photo above is a pretty poor one, but there’s something to see if one looks closely. Right on top of the spider, as if riding in a saddle, is another animal, wearing (or comprising?) a slender grey tube with three tentacles out front.

Here’s a photo from 20 seconds before. 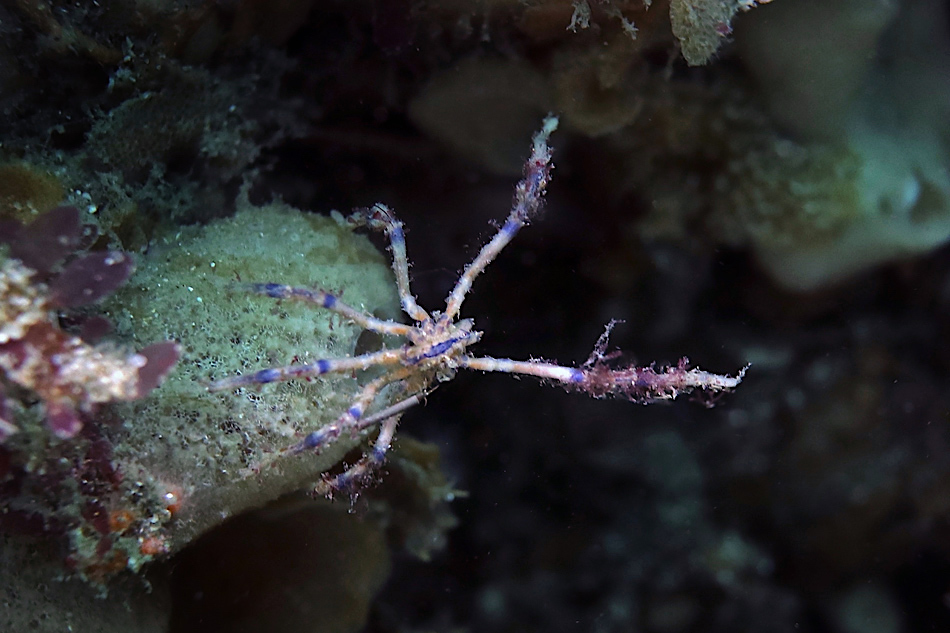 The tube-with-tentacles is now below the sea spider, apparently climbing aboard.

Here’s a closer view of the first photo, showing the rider: 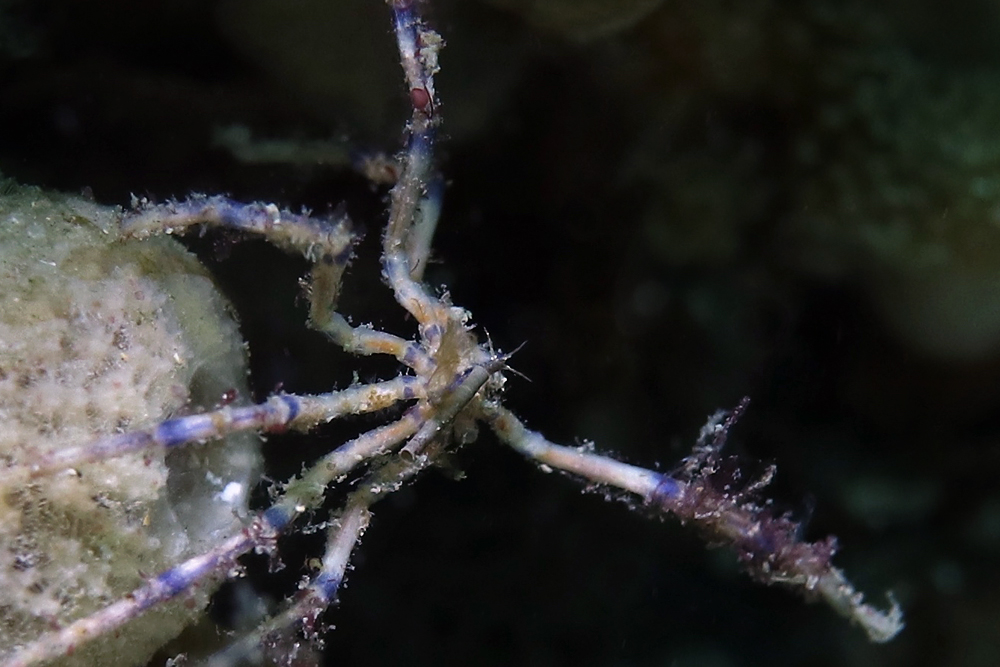 The sea spider moved forward and reached out over a chasm, from the sponge it started on to a tunicate that is not quite visible in the upper right of the first photo. 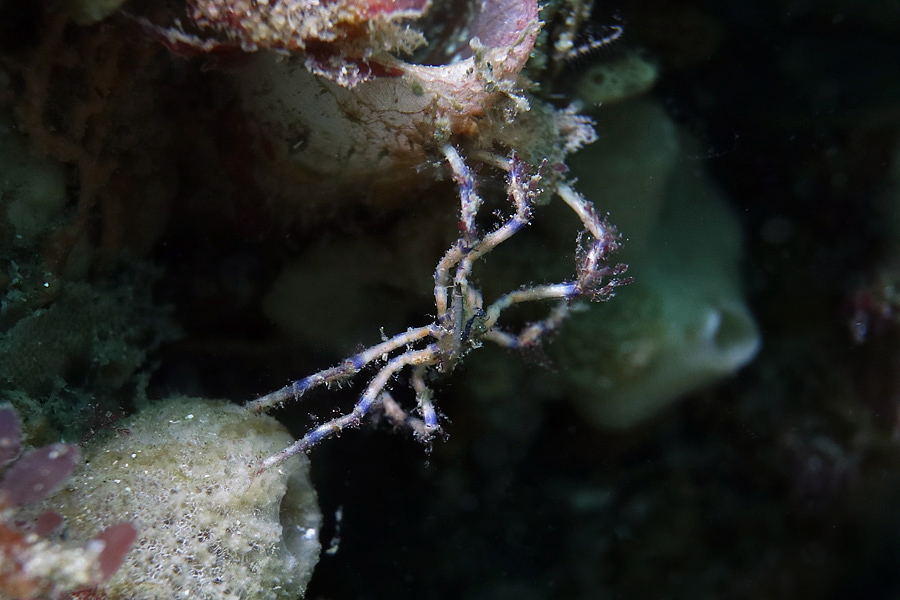 The tube-with-tentacles was still in the saddle.

But after the sea spider settled on the tunicate, it began tangling its body up, and – in a way only semi-clear in the photos – seems to bring one leg under the body of the tube. 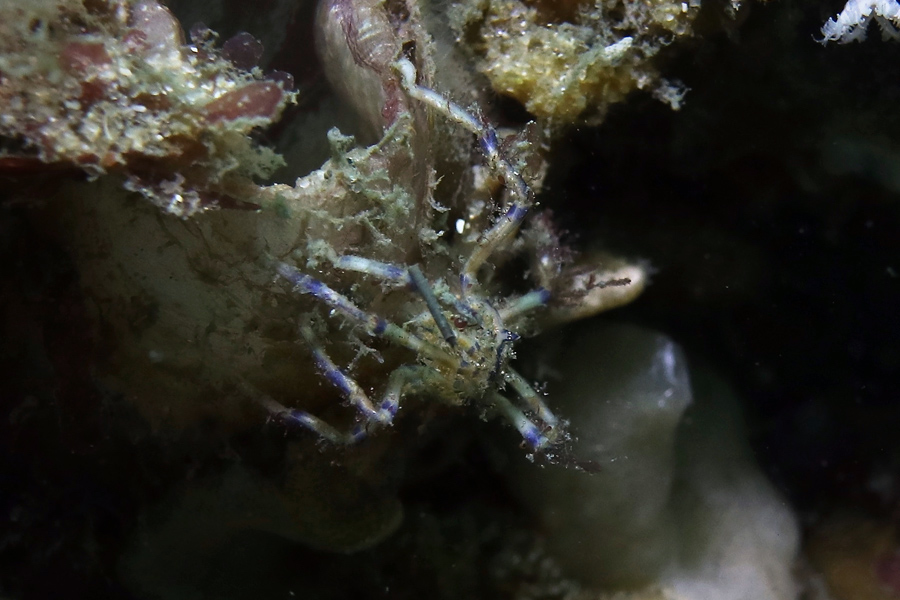 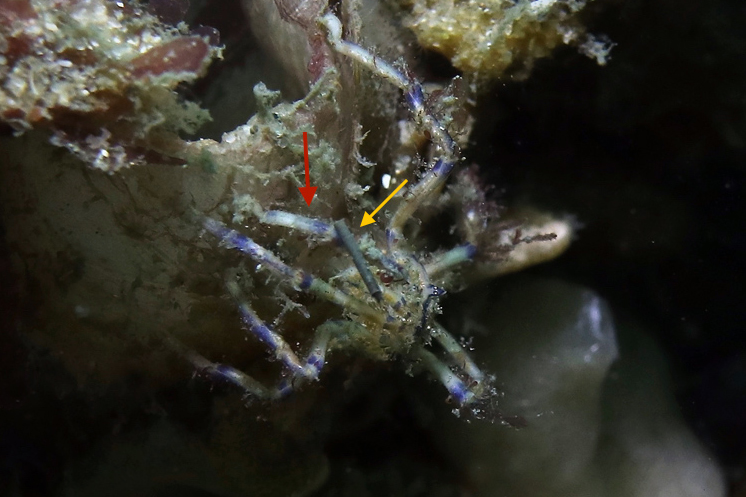 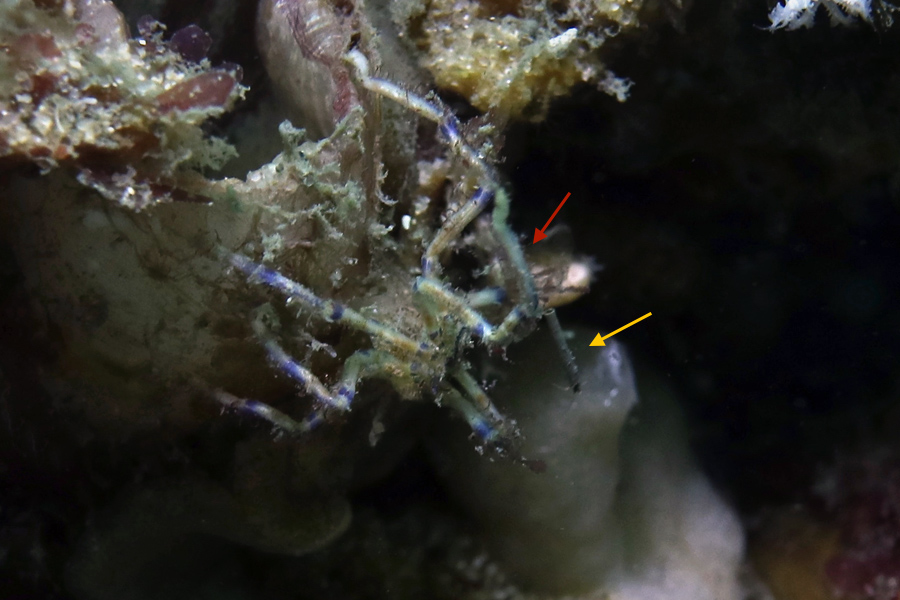 The rodeo ride was over. This was almost exactly a minute after the second, climb-aboard photo above.

The climb on, the period in the saddle, and the bronco-style eviction all occurred while I was watching, and as the scale was so tiny, I had no idea. I’m guessing, but I’d say the sea spider was perhaps 3 cm with its legs stretched out. The rider was hence quite tiny.

Who was the rider? We have a grey tube, something like three visible tentacles, and that’s it. It’s like a tiny version of a giant Paleozoic cephalopod, Cameroceras. I thought it might be some sort of tube worm, but Marty Hing, who seems to know every obscure and tiny marine creature personally, tells me it is almost certainly a tube-building amphipod – hence an arthropod like the sea spider, and a relative of the skeleton shrimp I wrote about here a few years ago.

Tube-building amphipods have a small literature, as far as I can see – I marvel at the dedication of people who patiently unravel the secrets of such animals. I read that to build their tubes, “amphipods use special secretions that are typically called ‘amphipod silk,'” though I learn this from a paper about “masts” rather than tubes. Amphipod masts are thin and large towers – relative to the size of the animal – that the animals use to raise themselves higher into the water column for collecting food. Some masts are used by more than one animal, and: “Additionally, masts can be used by amphipods to cultivate diatoms.”

The best website for tube-building amphipods I’ve found is this one – “Real Monstrosities” – and the Japanese video included is suitably spooky.

The episode occurred at Fly Point in Nelson Bay, during my long-awaited first trip back, earlier this month.

This entry was posted in Arthropods, Marine life. Bookmark the permalink.