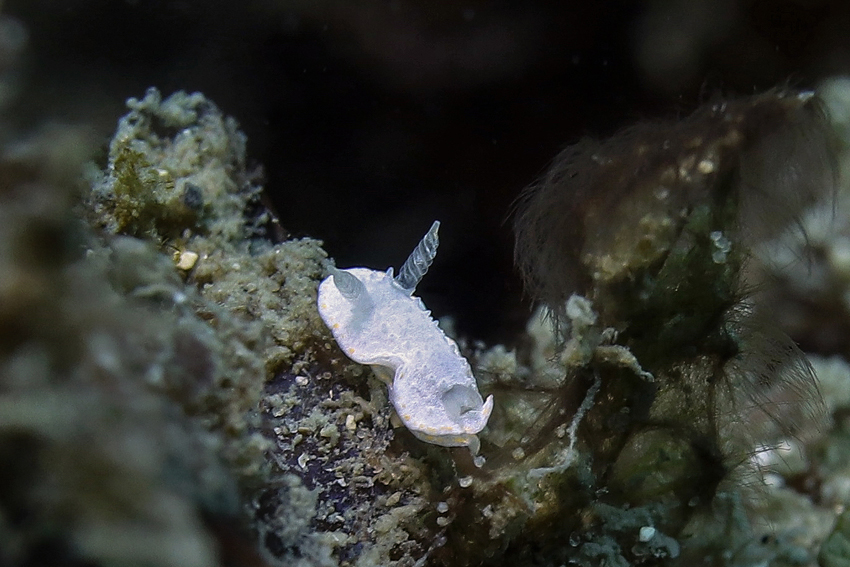 The animal is a nudibranch (a kind of sea slug): Diaphorodoris mitsuii. It’s tiny, just millimeters long. The photo was taken at the Sea Slug Census at Nelson Bay in September, a volunteer day of cataloguing nudis and related slugs.

I did not contribute particularly well at my first census, partly because I was distracted by a couple of octopuses. But I did find the relatively exotic species above. Below is another tiny nudibranch from that day, Goniodoridella savignyi. 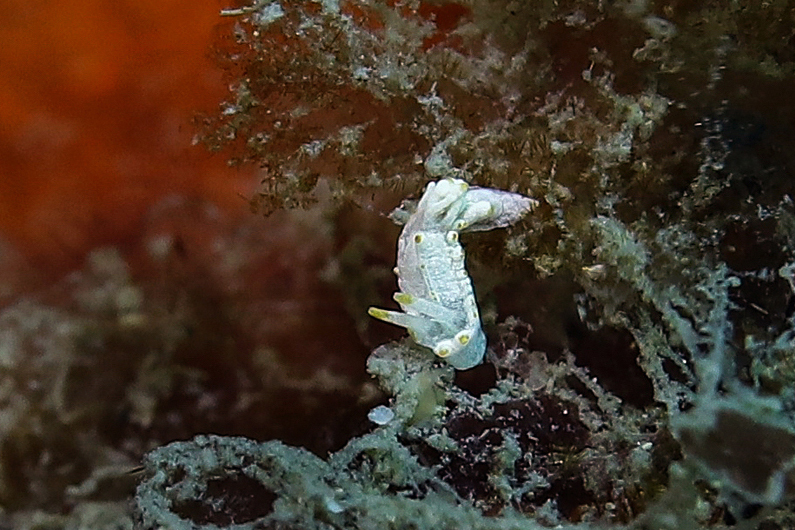 In both cases, I took the photo of a tiny white scrap, not being able to see any detail at all. It’s occasionally frustrating to be searching for animals so tiny you can hardly see them until later on the screen (if they turn out to be anything at all). But aside from the marvel of nudibranch colors and shapes, there is excitement in reaching into this tiny further world, unveiling activity one would never usually see.

Even on the screen it can take a while to unravel what is going on. This scene (not from census day, but from a week or so later) initially had me puzzled. 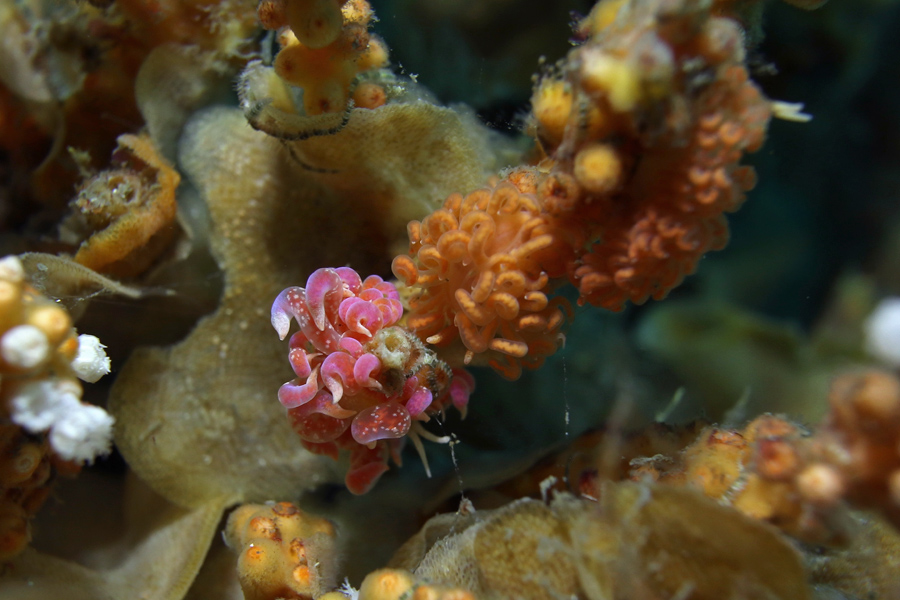 I worked out that this is three nudibranchs of two species. (Excuse the out-of-focus parts.) There is a pinkish curled-up individual of Phyllodesmium poindimiei, and two individuals of an undescribed species known as the Apricot Phyllodesmium (though I don’t know if it is clear that this is a species difference).

Another shot of Phyllodesmium poindimiei, showing him+her stretched out, is here, and here is a shot of the Apricot form.

Above, you can see the orientation of the animals from the horn-like rhinophores on the front, and this shows that the very curled Apricot Phyl. is oriented towards the P. poindimiei (who is pointing down), while the other Apricot Phyl. is pointing away, in the background. All three are covered in cerata, tentacle-like outgrowths from their bodies.

I have seen a couple of cases where nudibranchs seem to chemically track individuals of other species (they can’t see very well). Some nudibranchs are carnivorous of others, though that does not seem a likely scenario here. It might be an inter-species mating attempt (if indeed the Apricot form is another species). Here is a close-up… 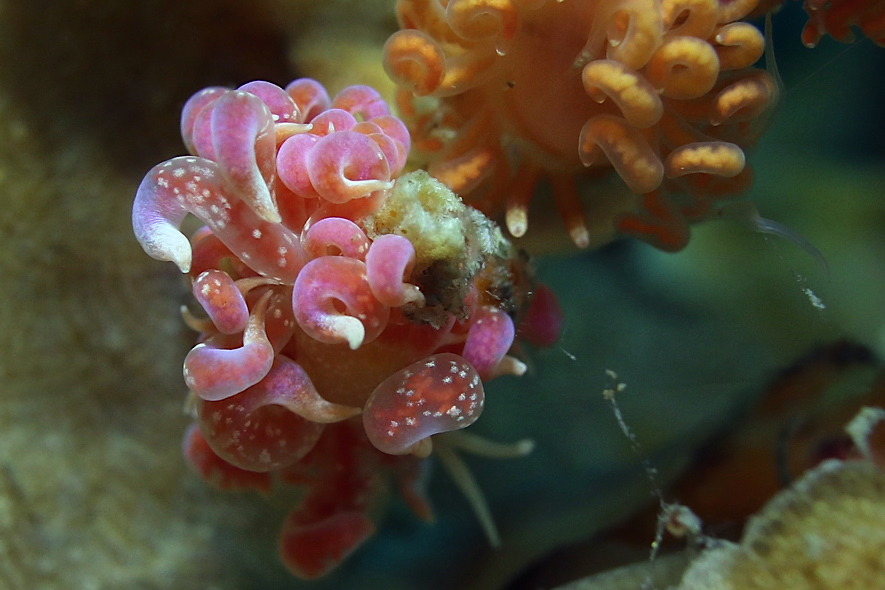 … and here is another, showing the marvel of the P. poindimiei‘s insides, with white marks like stars on the surface of a translucent ceratum. 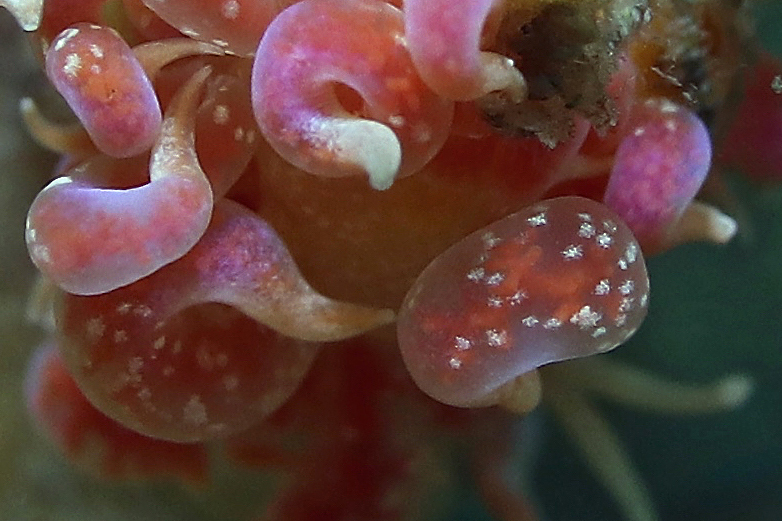 Finally, here is one more nudibranch from these dives (again not from the census). 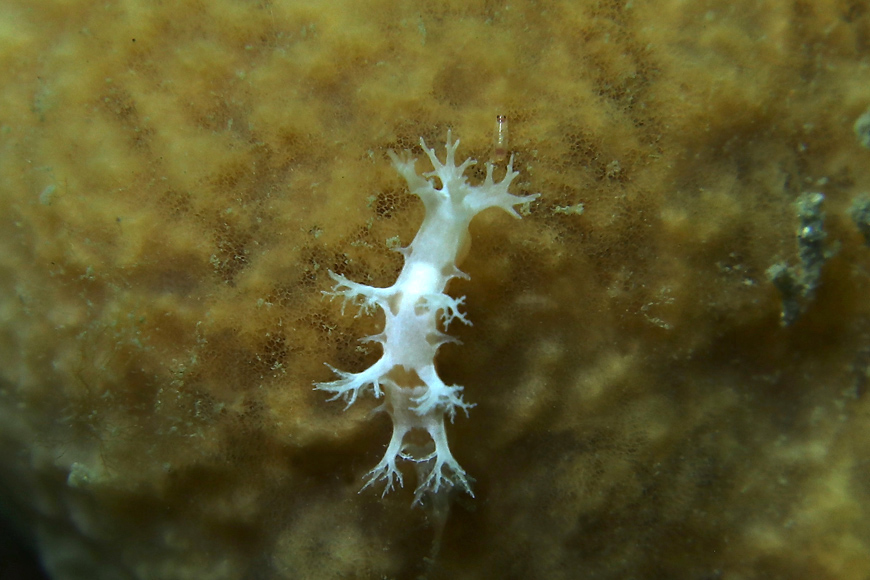 This is a Tritonia. That is a big group with some closely studied animals, but also has a number of undescribed species, including this one. This species is beautiful in its own right, and appears also to mimic a soft coral that is abundant in Nelson Bay. For me, the bodily homage to a coral adds to its appeal. They can be quite hard to see, but this one was roving over a sponge.

Tritonia is another small animal. When I zoomed in on this one, though, I saw something just above its head: a body and two eyes. There appears to be a tiny crustacean sitting there on the sponge – tiny even in comparison to the Tritonia – moving and sensing at a different scale again. 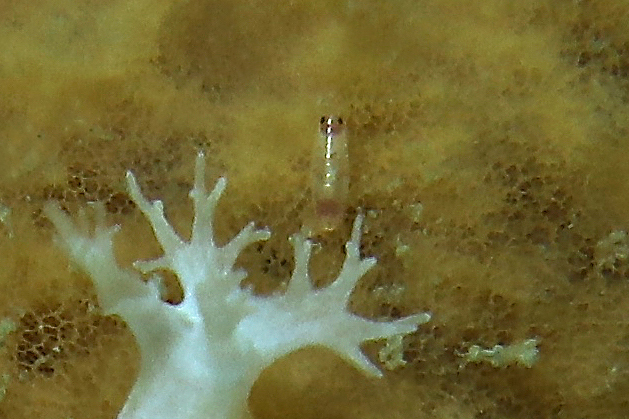 The tiny crustacean is an isopod? (Sphaeromatidae?) That shot is not the best of the Tritonia (It’s the best of a couple that include the crustacean). Another shot of this Tritonia species is on my instagram page, here.

The results from the September census are here.

Thanks to Tom Davis for organizing the census, and for his ongoing help with my efforts to understand the marine life of this area.