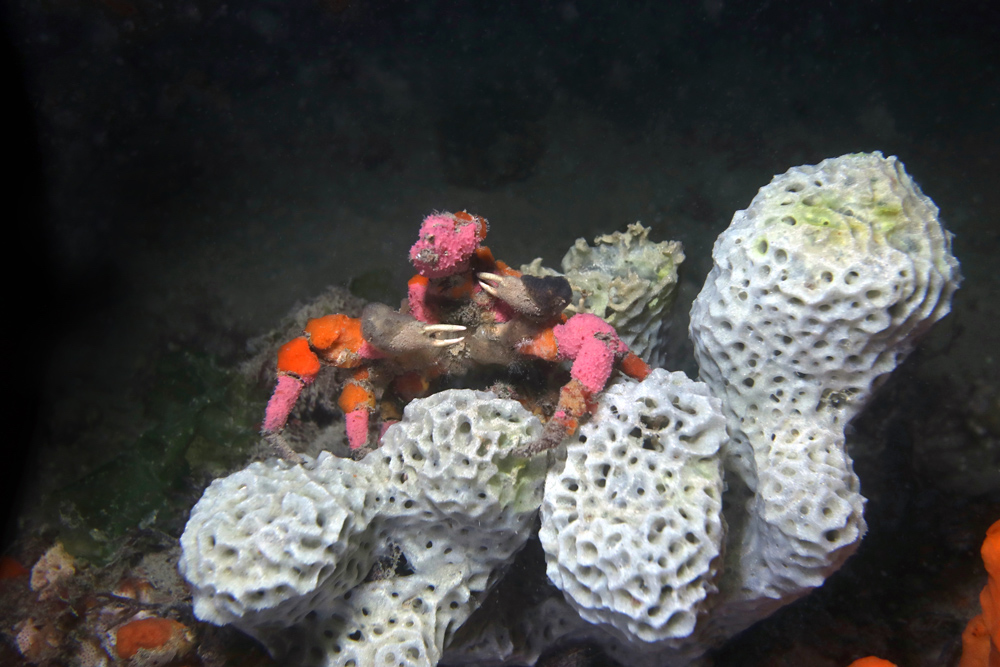 Decorator crabs such as Hyastenus elatus encourage sponges, soft corals, algae, and hydroids to grow on their shells, attaching samples of these additions to hooked hairs grown for that purpose. They become little gardens, walking ecologies. 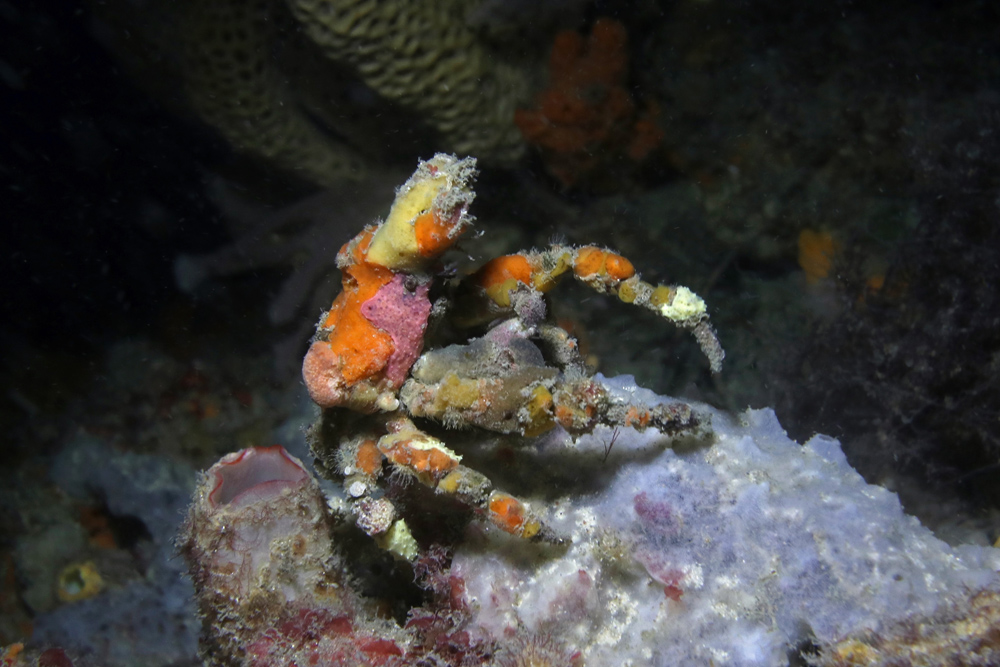 They do this, I understand, to discourage predation, including by octopuses, which love crabs and often hunt by extending their arms in many directions and tasting surfaces with their suckers. I did once see an octopus eating a large decorator crab, but I think this is unusual, and I’ve several times seen octopus arms touch decorator crabs and move on without reacting. I am not sure whether the sponge and other adornments function mainly to deceive or mainly to discourage. Decorators are also well camouflaged visually, when they sit still.

I first saw them at Nelson Bay some years ago, and they have been a highlight for me on those visits ever since. Last week I did a night dive in the bay, and found the waters alive with decorators. They were everywhere – walking over the open sand, clustered on sponges and gorgonians, jostling and grappling with each other, perhaps mating. Quite a few were standing right at the top of some tiny cliff or promontory. I’ve never before seen so much of the landscape pick itself up and walk about. It was the Night of the Decorators. 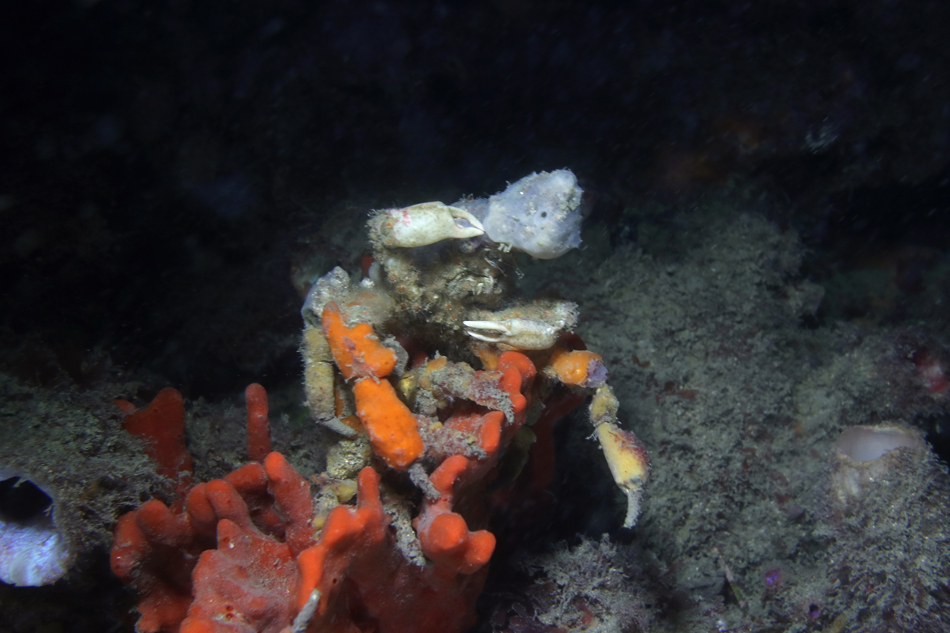 Though the covering is definitely sought after by the crab – it is clothes, not an infection – it can give the animal a macabre appearance. 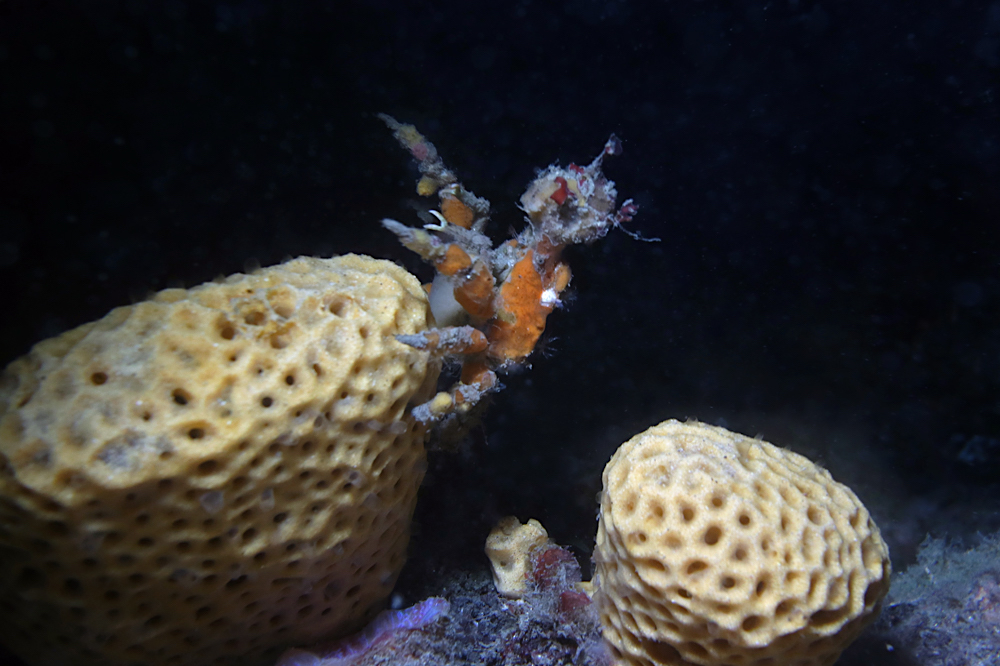 This was also the Night of the Numb Rays. These are electric rays that can give you a substantial shock on contact. I saw about four of these, or perhaps a smaller number repeatedly appearing out of the dark and coming in close. At least one was quite big. I have no photo of them, as getting out of photo range was a priority in every case. (Here is a daytime shot, from Cabbage Tree Bay.)

These last two images are video frames, cleaned up. They show the kind of grappling that was going on around us. 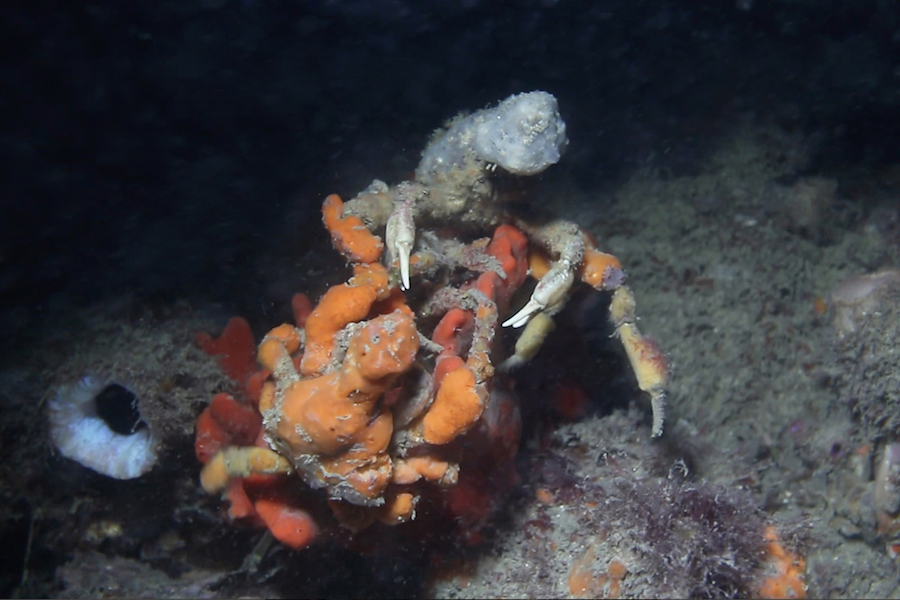 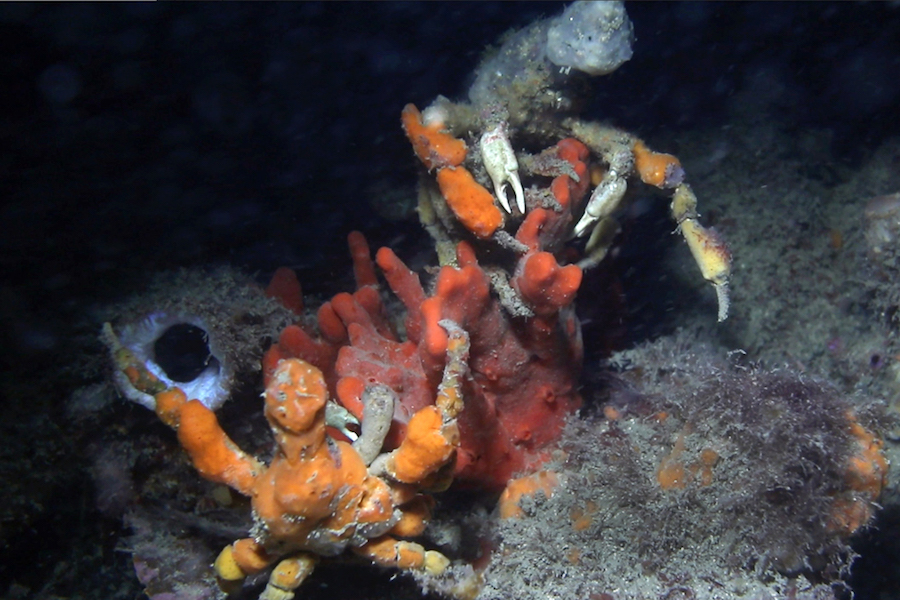 Thanks to Trudie Campie and Fuzz from Feet First Dive at Nelson Bay, who led the dive. Trudie is a very good dive guide. Also along were cephalopod expert Bret Grasse and his wife Vanessa, visiting our local octopuses.

Unconnected with decorators: A typically marvelous shot by Alexander Semenov of a pelagic (sea-going) nudibranch is here.

Another exceptionally good photographer I recently discovered is An Ng.

This entry was posted in Arthropods, Marine life and tagged crab, scuba. Bookmark the permalink.

2 Responses to 71. Night of the Decorators