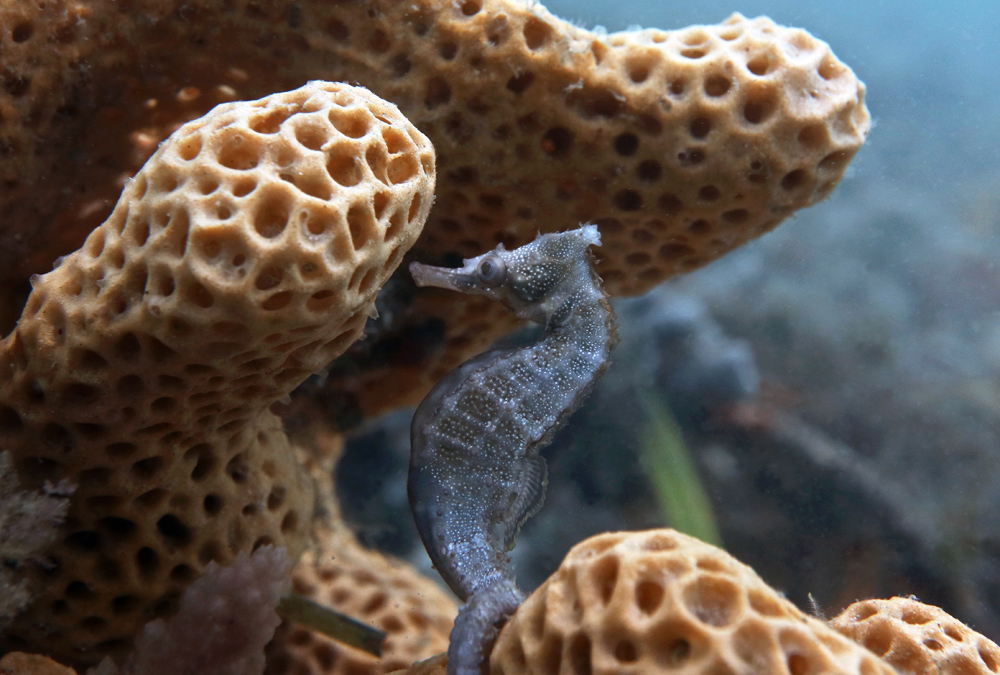 The photos in this post are from a dive back in December, on the “Pipeline” site in Nelson Bay. This has probably been the most important dive site for me, even more than Octopolis, over the past few years. It appears on page 1 of Metazoa and features in many other parts of the book.

The weather that day in December was ominous, as a storm was making its way down the coast. Much of Byron Bay, further north, had been washed away and the storm was soon due down where I was. Conditions were gloomy already, especially under the water. I was not sure I’d stay ahead of the first rhythmic ocean surge coming through ahead of the rain. 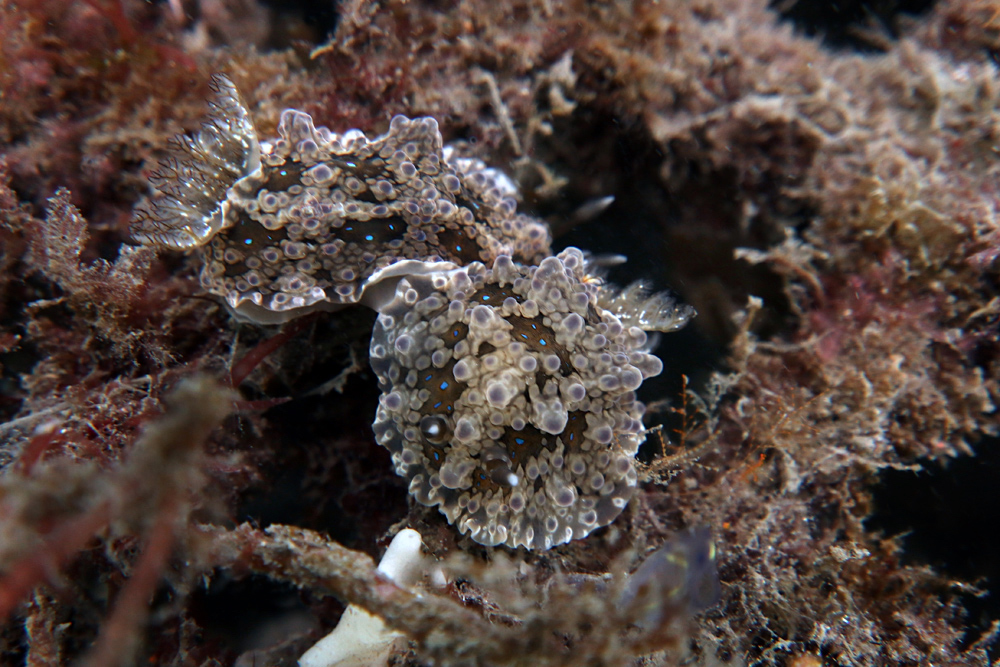 The photos here are in the order of encounter with the animals (with one exception, as the seahorse at the top should be second). I headed to a seahorse site initially, found that beautiful blue-gray one, and then wandered. The dive ended up being a tour of many, nearly all, of the groups of animals that have made the site so fascinating for me over the last few years. The nudibranch above is the spectacular Dendrodoris krusensternii – two individuals (as I noticed only after posting), probably mating.

This octopus was perched on a sponge near the seahorse. . .

And on a smaller scale, this is the same species of flatworm pictured in the color pages of Metazoa (Cycloporus venetus). 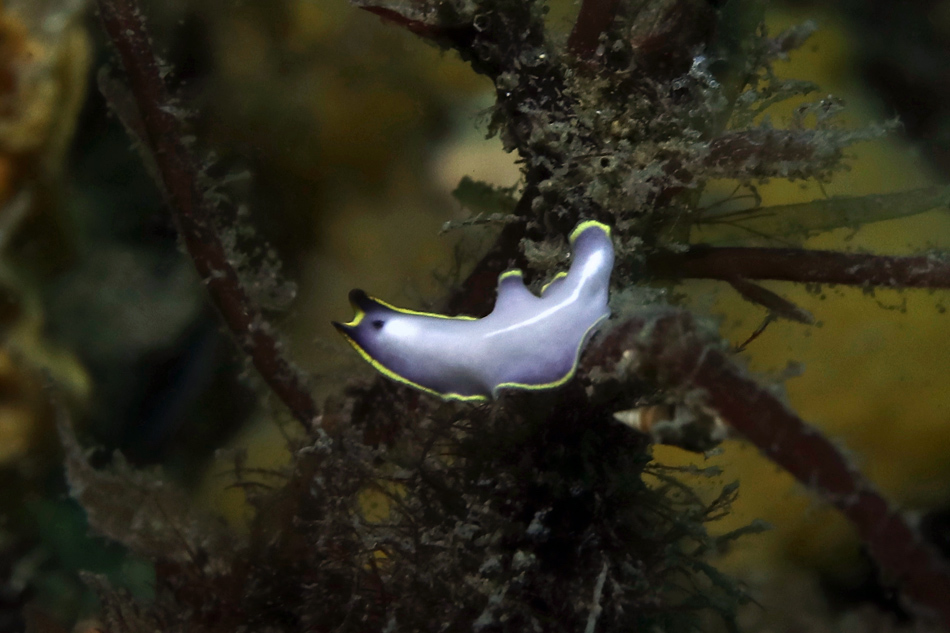 Near the seahorse at the top was also a small cuttlefish, Sepia plangon, showing some stylish copper-bronze colors. . . 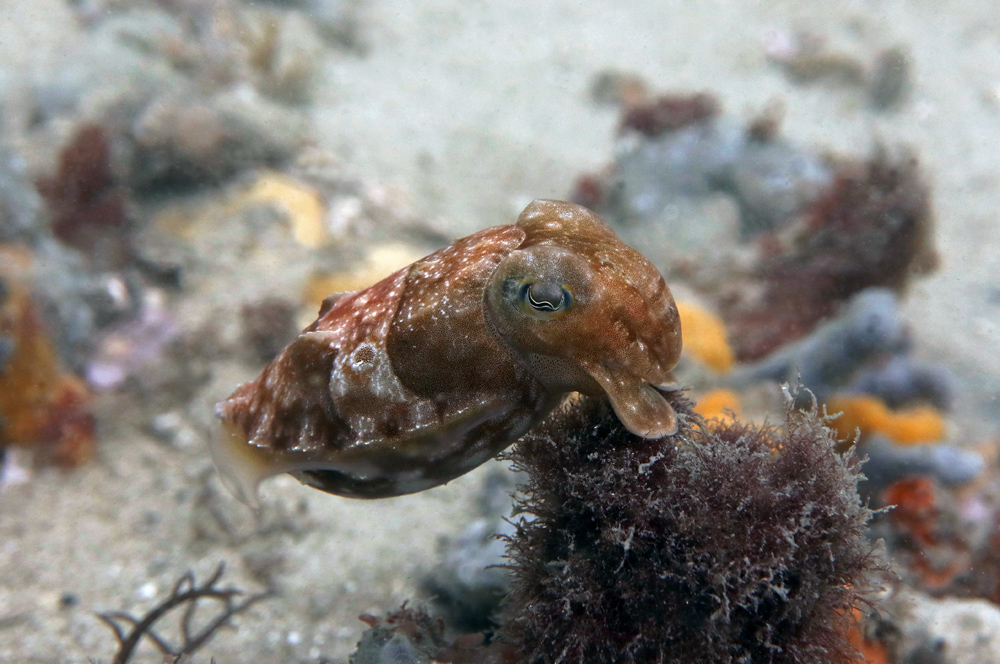 And in the same area was a blue-lined octopus, one of the deadly ones, Hapalochlaena fasciata.

Back towards shore, a cowrie perched on one of the gorgonians the species favors (Phenacovolva rosea, the rosy spindle cowrie). . . 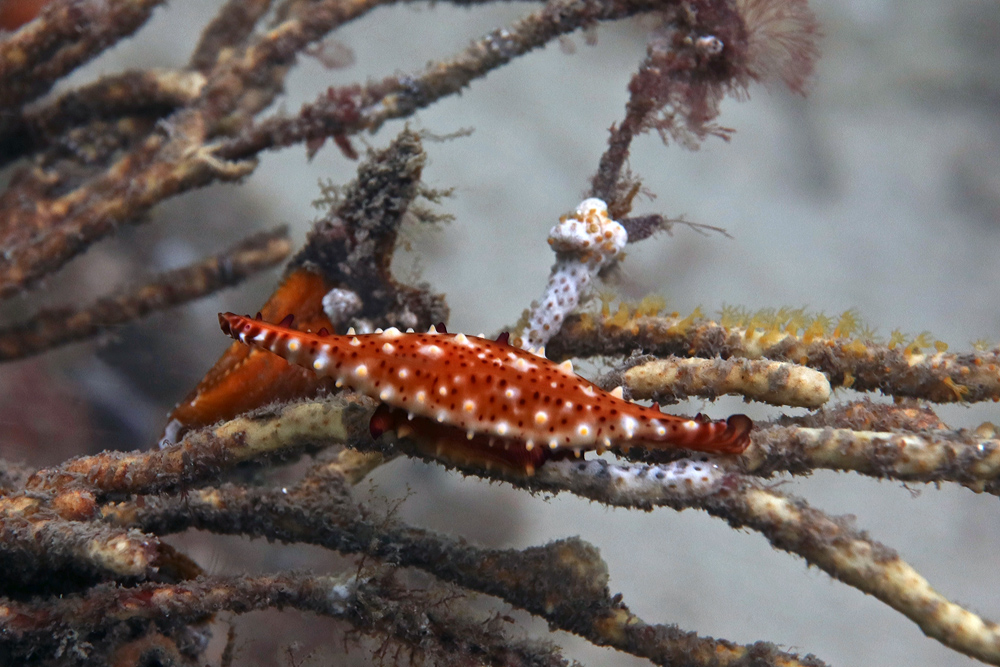 And very close, as I made my way in, another octopus (O. tetricus, the same species third from the top) brandished a razor clam shell at its den. 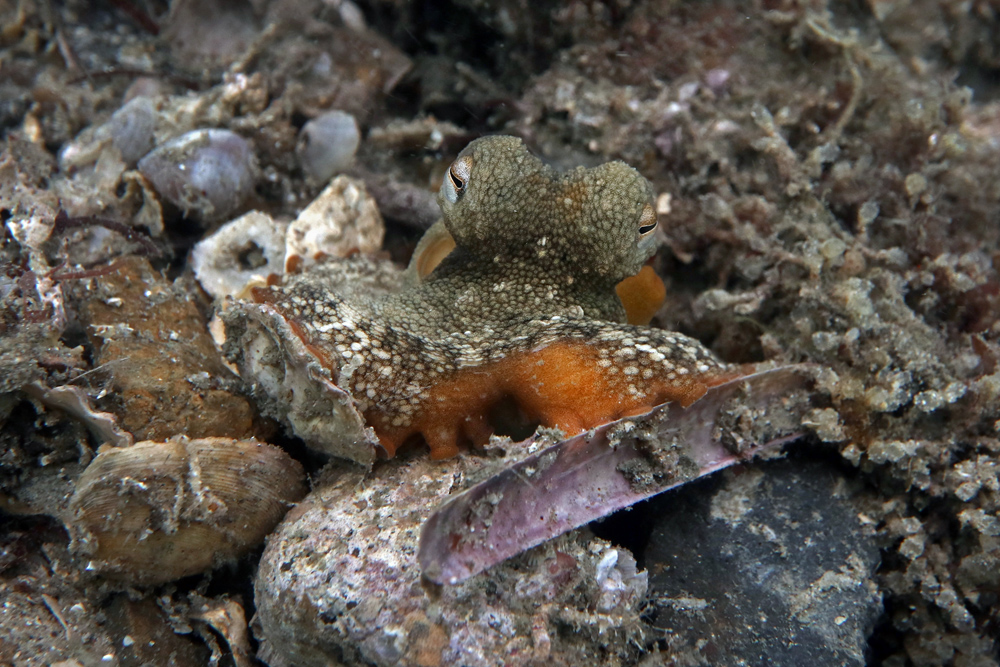 In the shallows I encountered a school of kingfish. Then, right at the end as I prepared to get out, I came across this green gastropod, maybe 4 inches long or so, like a small animated football. I’ve not yet worked out what it is – a sea hare or a side-gill slug or something like that. Despite the fact that I’ve been out in those waters so often, there’s always another flatworm, always another gastropod: another, another, another…. 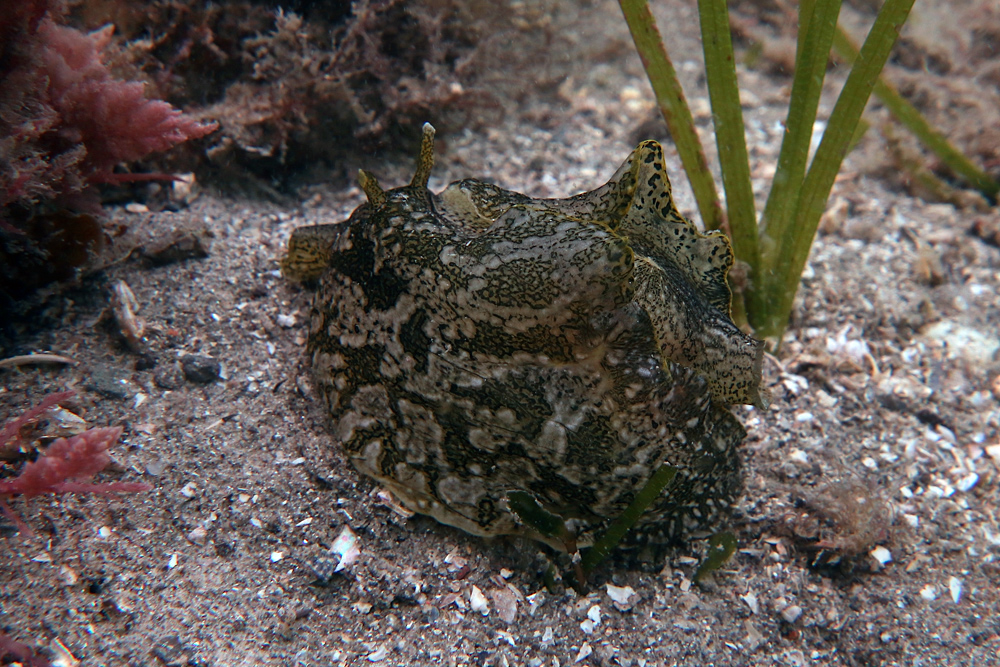 As I sorted out my gear beside the car, the first heavy raindrops hit the roof.

I decided to write this post – “The Pipe Before the Storm” – back then beside the car, though it has taken me a while to get round to it. In the months since, that title phrase has taken on additional significance. The December storm came and went, as countless have, without enduring effects. But then, in March, the entire state was hit with torrential, very unusual, rain and flooding, and before long a mass of muddy and non-salty water was heading from flooded inland country down the Karuah River towards the bay. All the dive sites, especially the Pipeline, have been severely damaged. The muddy river water has killed the first six meters or so of life all through the area, damaging deeper sites to a lesser extent. I’ve not been back to the Pipeline since the floods, though I did one dive at nearby Fly Point – not hit quite as hard – and recently saw a collection of Pipeline photos taken by Meryl Larkin, who has done a great deal of work in recent years both investigating and trying to assist the survival of a rare soft coral that lives in the bay (the soft coral that opens Chapter 3 of Metazoa). Those corals have been devastated by the floods, and her photos of the whole site are quite distressing. In social media discussions, some biologists and long-term divers have been wondering if the life we remember there will bounce back at all. Dave Harasti, a biologist who knows these sites better than just about anyone, is not optimistic.

I did get one Pipeline dive in between the dive described above and the March floods, but it was this December dive that felt like a gift from the site, a leisurely tour of so many of the animals that have made the place special. I’ll go back fairly soon and have my own look at the damage, and hope, as one does so often in Australia, for regeneration.