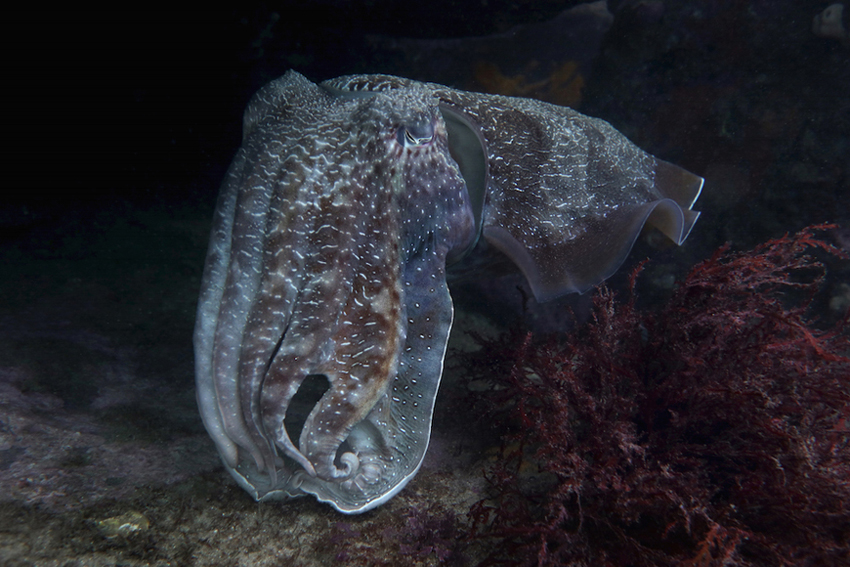 The text of this post was written for the Waterstones Book Blog. Other Minds is Waterstones non-fiction book of the month for March 2018.

A week ago, in the late afternoon, I got into the water at a site I’ve dived hundreds of times now – Cabbage Tree Bay, just north of Sydney. The conditions looked OK from up top, but there was a strong surge below, with volumes of water chugging steadily in and out, carried by a cyclone swell coming in from the Pacific. Everyone down there was collected together in a regular forward-and-back motion, on a rhythm of eight to ten seconds or so.

I’d gone into the water to visit some giant cuttlefish (Sepia apama) I’d dived with a few days before. One was extremely bright and colorful; the other was more muted in color, large and notably fat. This second one, who also made slow motions with his arms, I thought of as “The Elephant” – an elephant with eight trunks. The bright one, who I’d seen just once previously, has no name yet. 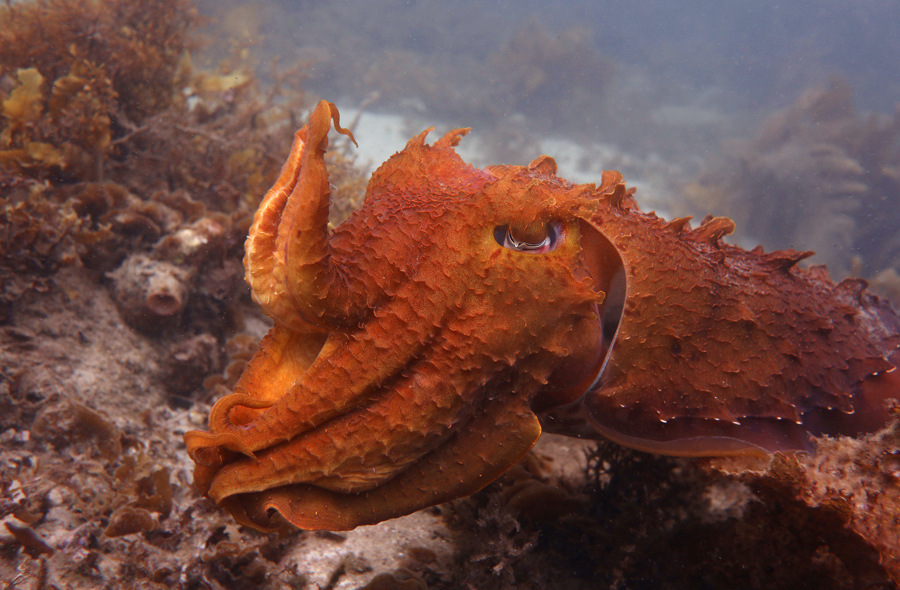 The cuttlefish were both in dens, about 100 meters apart. I went to and fro between them. The Elephant often lay flat on the bottom; the other was in continual motion. He was carried on the surge, along with me and the larger fish, in a closely synchronized dance, forward and back. 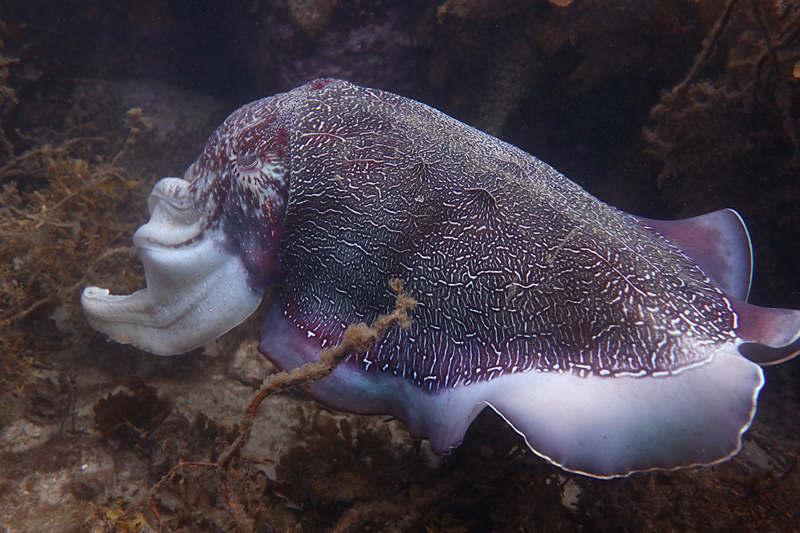 Over ten years ago now, I first got into this water and come across these animals. I was mesmerized by their colors, as described in the first pages of Other Minds. These animals can change their entire color in less than a second, moving between complicated patterns and solid washes of color. Their faces glow with electrified threads, replaced by periodic dark clouds and flares of bright yellow. And an endless range of reds: brick, magenta, cadmium red. Every possible red. 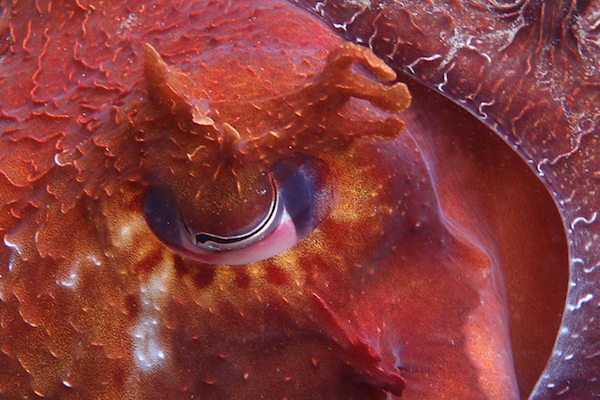 In the same waters after starting to visit the cuttlefish, I soon came across octopuses, especially Sydney’s “Gloomy” octopus. These animals are much smaller than the cuttlefish, with bodies occasionally up to a rugby ball’s size, but usually smaller. They have large eyes (hence the name) and they also change color. One of the very first octopuses I saw in these waters did something I still find puzzling. It was hunting, leapt upon a hermit crab in its shell, and carried the shell back to its den. Then it did not try to eat the crab, but positioned the shell at edge of its collected pile of objects, with the open end outwards, in what looked like a quite deliberate way. The crab found itself held outwards. Events like those were the beginning of my fascination with these animals. After I began to watch them, I began reading about their history and biology, especially their evolutionary relationships to vertebrate animals like ourselves. Cephalopods, as molluscs, are more closely related to oysters than to fish or to us. The evolutionary branching that separates their line from ours lies so far back that I came to think of them as an “independent experiment” in the evolution of behavioral complexity, and probably in the evolution of experience itself. 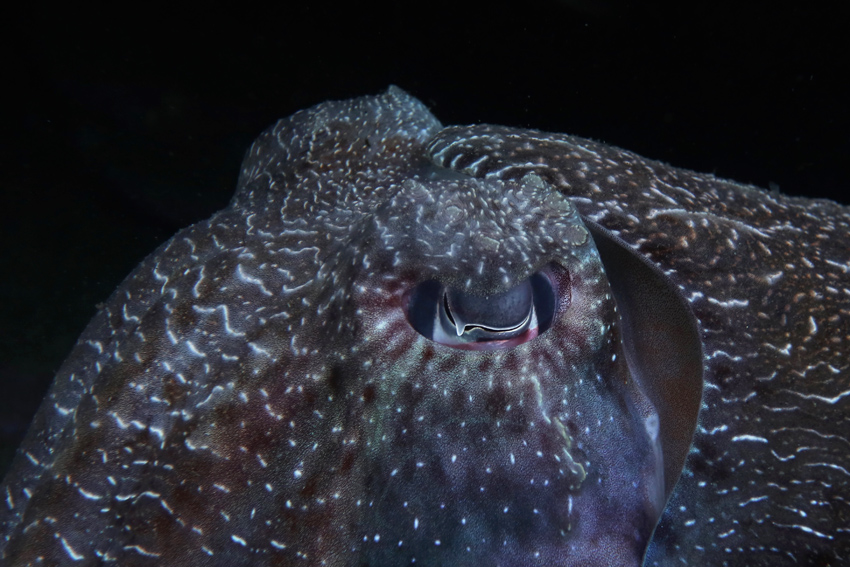 In front of The Elephant was a dull shell. I suspected a hermit crab was hiding inside, and sure enough there was. Soon he or she began to eat (hermit crabs have spectacularly bad table manners), roamed around a bit, and fossicked, all in front of the Elephant’s face. I guess giant cuttlefish are not predators of hermits; the crab was not scooped up and brought into the den like the one a decade or so earlier. At one point the hermit stopped messing around and stood, with eyes out on stalks, right in front of the cuttlefish and stared at him. There we were: me at the back, a hermit between us, and a giant cuttlefish being inspected by both.

The water was full of silt and a bit dark – no good for photography. I was partly glad about that, as it reduced distraction. And although these animals did not do much while I was down there, the bright one and the Elephant, in the end I realized I was there with them for over 90 minutes, just hanging out, drifting forwards and back, until my air ran down and I swam in.

Feb 23, 2018. All the images in this post are photos of the “bright” unnamed cuttlefish, taken a few days earlier. So these are all photos of the same animal, on the same dive. All were taken with the available light, no flash. Here is a photo of The Elephant, taken on the murkier day of the post, and here is Elephant plus Hermit.

One Response to 60. A Long Waltz With Cephalopods