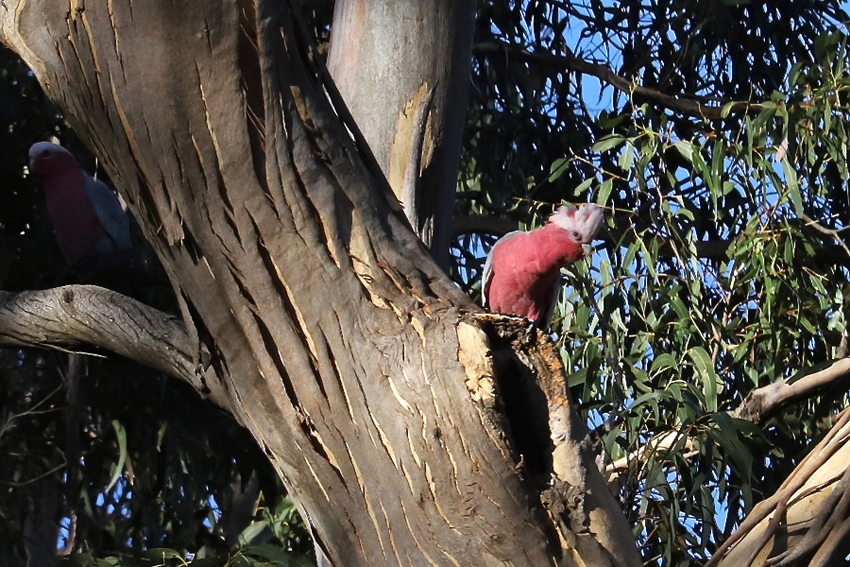 This is a nest that has just been established by a pair of galahs – a kind of parrot – down behind our garden. I think the nest is new because this is the first time I’ve seen galahs at all in this immediate area. Five different parrot species come through here regularly, and although galahs are local to the region, I’d never seen them right here, until one morning this week when a novel birdy disturbance rippled through the eucapypts, and later that day it seemed pretty clear that two galahs were establishing that nest in a hollow part of a large tree.*

Galahs are Eolophus roseicapilla, part of the cockatoo family or subfamily within parrots. The common name name “galah” rhymes, more or less, with “alarm.” They are often seen ambling about in flocks on flat grassy areas, but here they have quite an eyrie, perhaps 12-15 meters up. 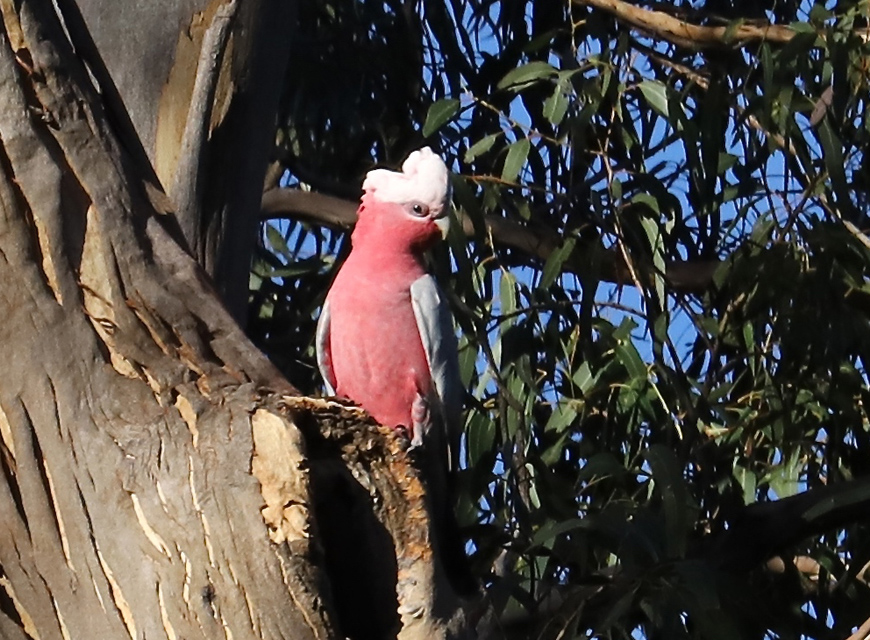 In Australia, galahs have a vaguely comical image. I was pleased to see another parrot species here, pleased also to see the nest. In the following few days, they also opened up for me some new perspectives on avian life.

At the end of day 1 they seemed established. I came out in the morning of the next day to see how they were going, and noted quite a lot of other birds hanging round the spot. These were of several species – kookaburras (a kind of kingfisher), magpies, and some smaller ones I don’t know. There was a vague sense of tension, especially from one solid kookaburra looking directly at the nest from a nearby branch. 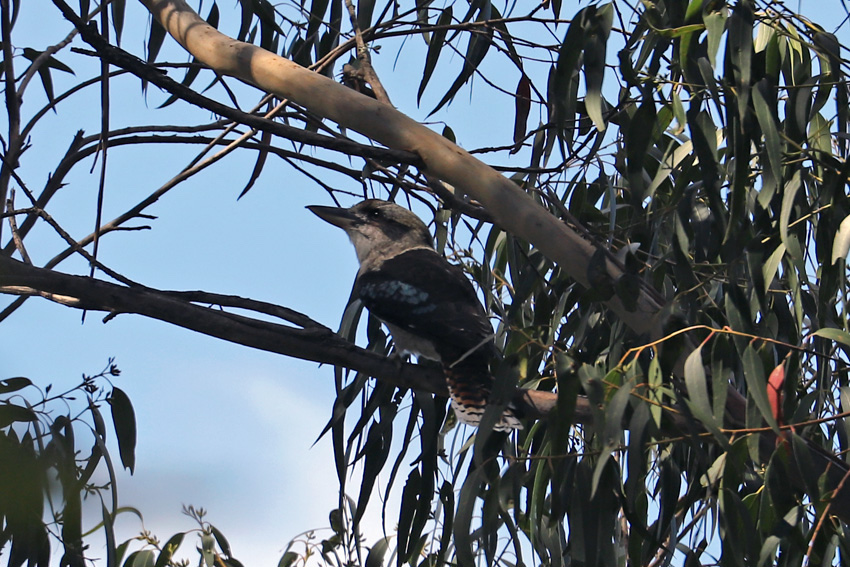 Galahs mate for life (though they will replace a mate after a death). The sexes look similar, differing just in the eyes. They feed on the ground for seeds, and will wander far to eat but then return each night to the same nest. After a while, I could not see the galahs and wondered whether they’d be able to hold their own in what seemed a higher-pressure environment than I realized, as birds of several different species seemed so engaged with their arrival. At about 4 pm the pair suddenly reappeared and hung out in and around the nest. A few other small birds seemed to be looking on, but the situation seemed more settled.

Day 3: I came out in the morning and both were there, messing about near the nest and with no sense of trouble. Some hours later, both zoomed off over the house and returned, noisily, from the same direction in the late afternoon.

Day 4: I came out in the morning to a different scene. A sulphur-crested cockatoo, a much larger and stark-white parrot, was giving them a lot of attention – poking around, flying close. Then there were three (or at least three) of these larger birds. The galahs were active too, and soon any semblance of toleration and coexistence was dropped. All the birds went into a series of launches, perches, gestures, and occasionally, outright clashes. At its peak, the scene looked like an intermittent series of WWII arial dogfights. 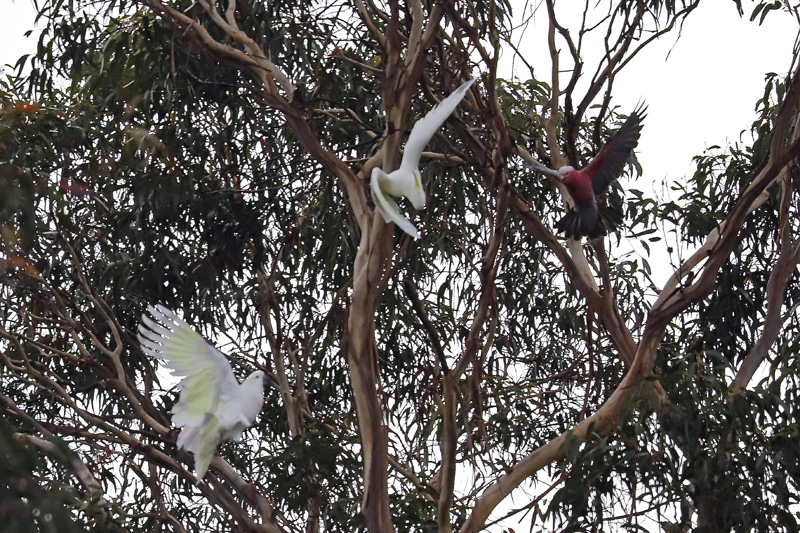 The moments of actual conflict were sudden and chaotic, hard to interpret, especially as they were some distance away and I had no binoculars. Only later, zooming in on photos, did I see the level of violence in these encounters. Here a cockatoo is over the top of a galah: 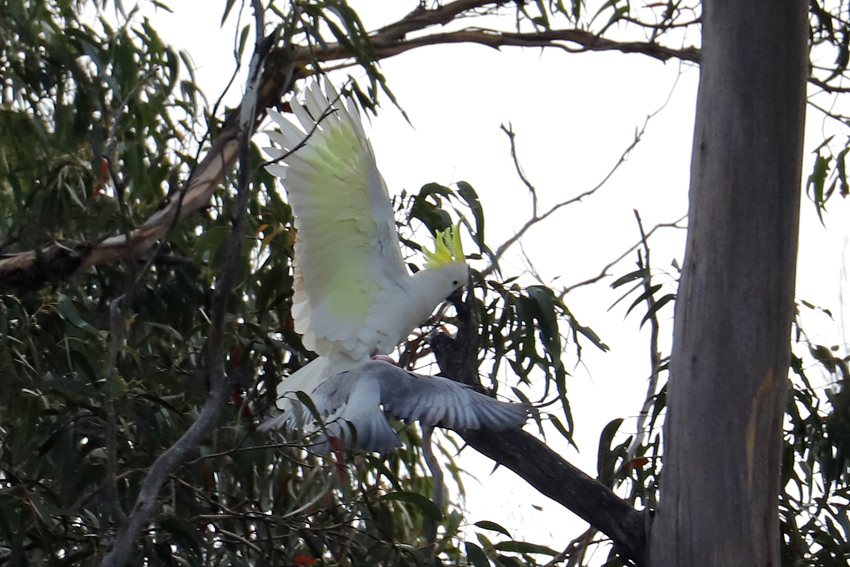 Here is a clash – one that also indicates how things would turn out. 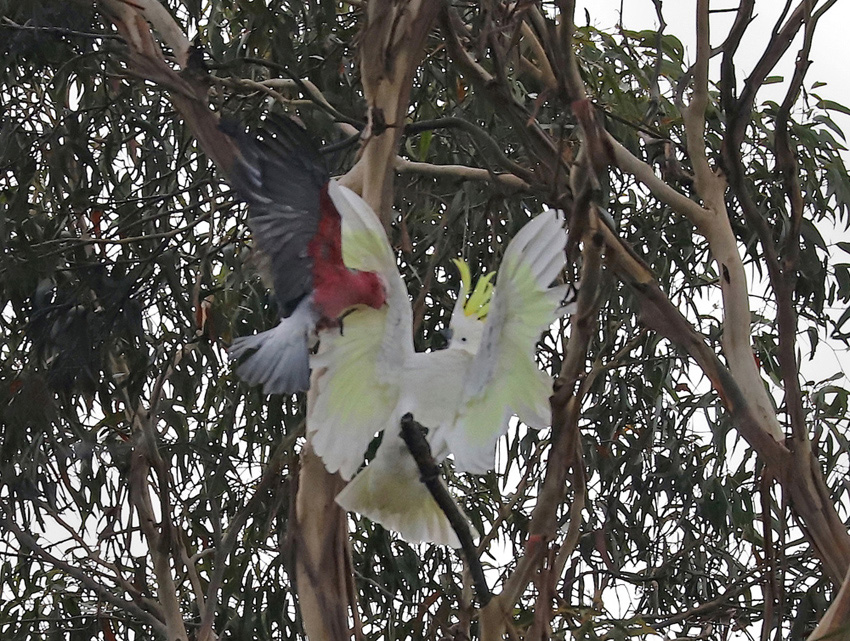 Despite being smaller, the galahs did not back down, and soon were holding the cockatoos further away, chasing them out. 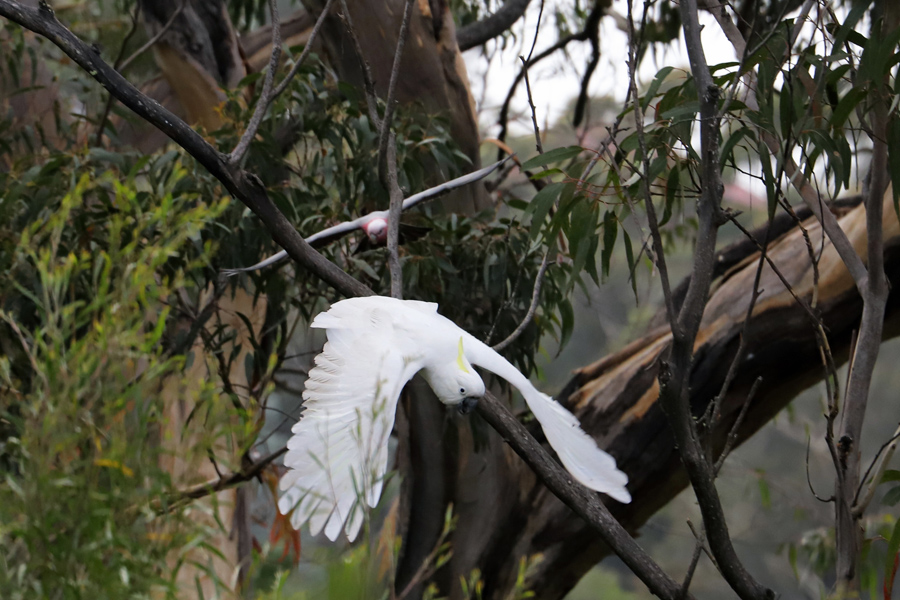 Eventually the galahs had the skies and branches to themselves. About 8 minutes or so after the battle started, the galahs were left in peace, with a last cockatoo flying cacophonously away overhead.

I’d seen birds of different species jostling about and excluding each other before, but this level of conflict was well beyond what I’d encountered. The galahs were both smaller and outnumbered. They had a common purpose – joint defence of their nest. I wondered whether the cockatoos also were functioning as some sort of team; they are intensely social birds that flock together. Either as a team or individually, what was at stake for them? The cockatoos were not, as far as I can tell, residents at risk of being displaced. They come and go. What was their investment in the fight? I was curious about whether the outcome of the battle was mostly due to this asymmetry of goal – with the galahs not merely holding ground, but defending a nest they had put several days work into – or to general differences in pugnacity in the birds, as individuals or species. Again, the conflict pitted two smaller birds against at least three larger ones.

I went down the hill to replace my lost binoculars. I returned to find no galahs, and soon hours of heavy rain. Were they inside the nest, sheltering somewhere else with more of a roof above them, or had they done less well in a second round of the fight?

If you look at the nest entrance you’ll see the bark has been stripped away. They were engaged in this when I first saw them there, and I’ll say something about it in a follow-up.

This entry was posted in Birds and tagged conflict, galah, parrot. Bookmark the permalink.