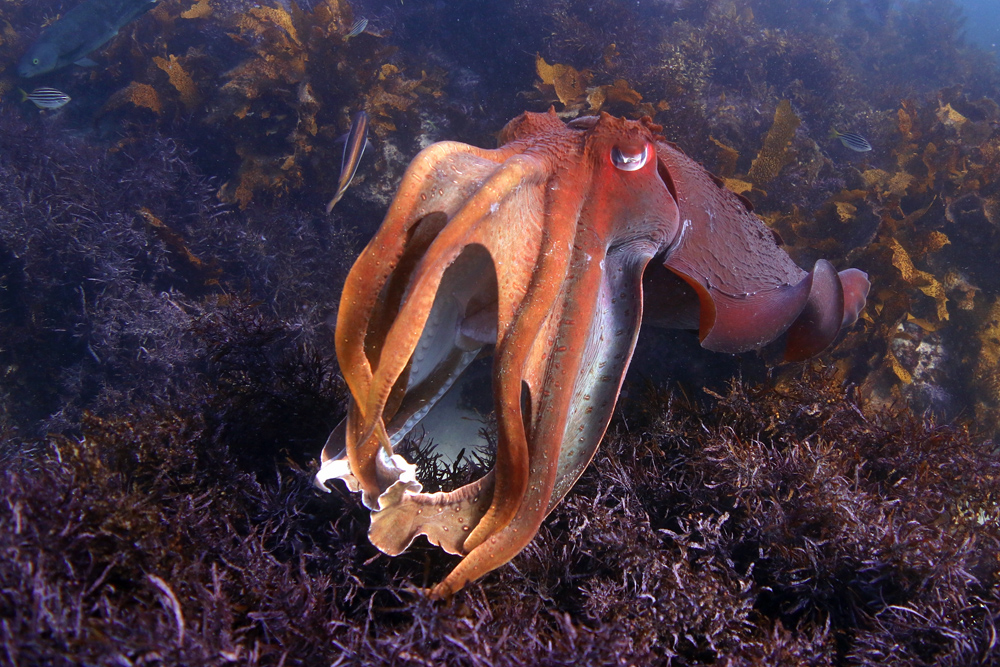 A couple of months ago I wrote a post about some of the giant cuttlefish who inhabited the Fairy Bower site (Cabbage Tree Bay, just north of Sydney) this year. The peak season for these wonderful beasts is around May and June, and this year was a good one. The first post had some photos from the early part of May, and this one will cover animals from later that month. The photo above is from May 30, but the same individual was around about a week earlier, on the 24th. Here he is then: 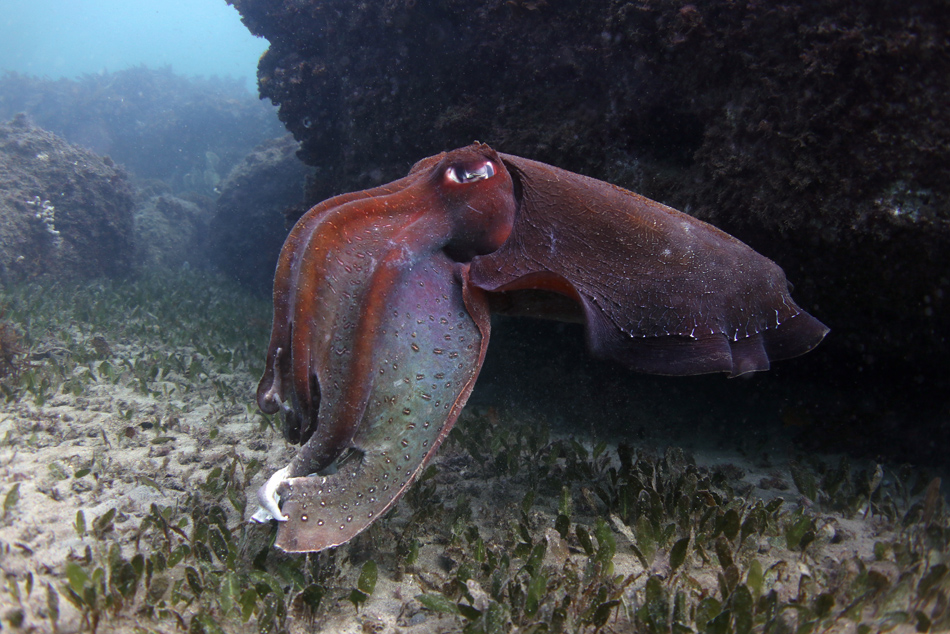 This identification over the week is based on a mark, a small scar or bruise, on the front-left of the body, below the level of the eye. The mark looks like a cross in some photos. Here is a close-up from the 24th, and here below is one from the 30th: 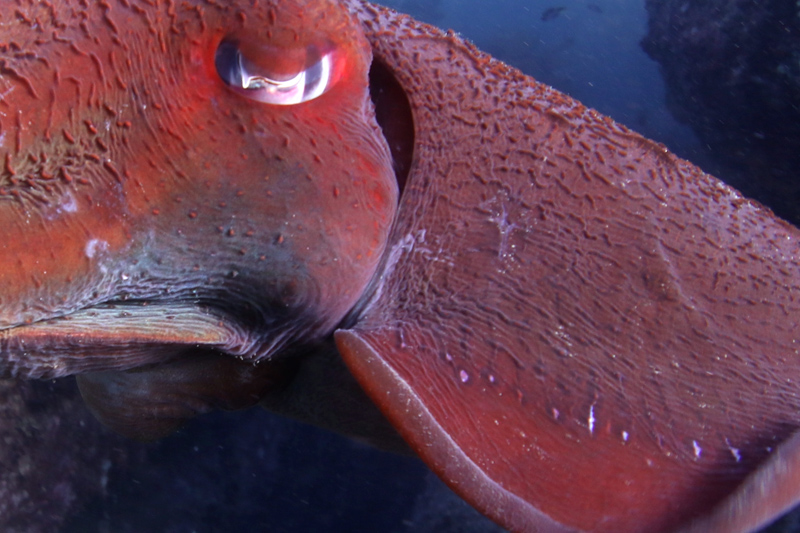 It’s tempting to also use for an ID some of the pearl-white bead-like markings along the lower part of the body. Here, one mark has a more vertical form than the others. It is a small vertical stripe. In many photos of this individual, a white mark at that location has the same shape. (See again the 24th photo.) The mark does disappear completely in some body patterns, though – this is a produced pattern, not a permanent mark. When the mark is present at all, it tends to have that vertical form. This might be a reliable quirk, but I am never confident using transient marks as identifiers, even when they recur in distinctive ways. Such are the challenges of an interest in individual cuttlefish. In any case, I didn’t realize the male I was following on the 30th was the same one from the 24th, until I looked later at the photos.

Here he is again on the 24th, showing an arm display like a huge moustache: 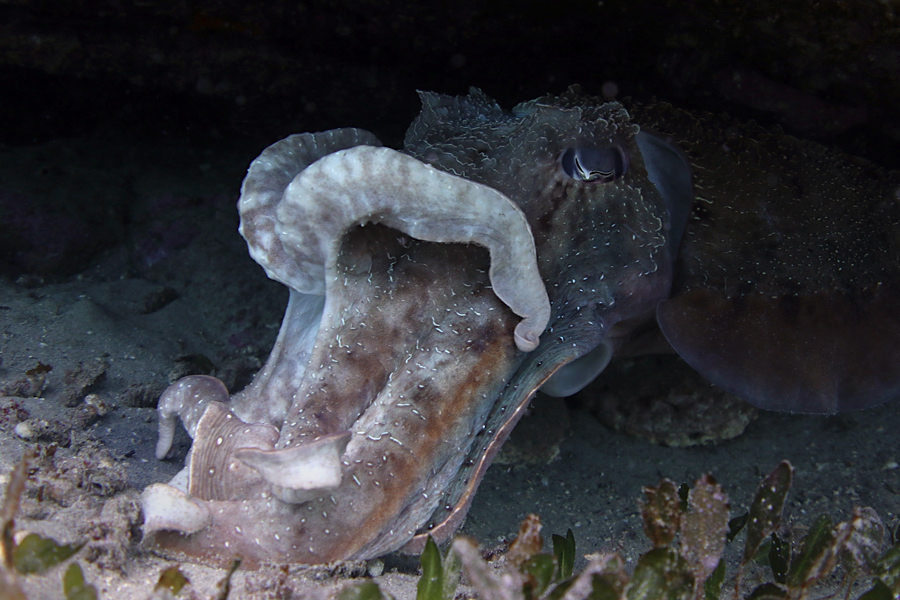 A few days later, on the 27th, this one was not around. Another male was (lacking that mark on the left), who had some moves of his own: 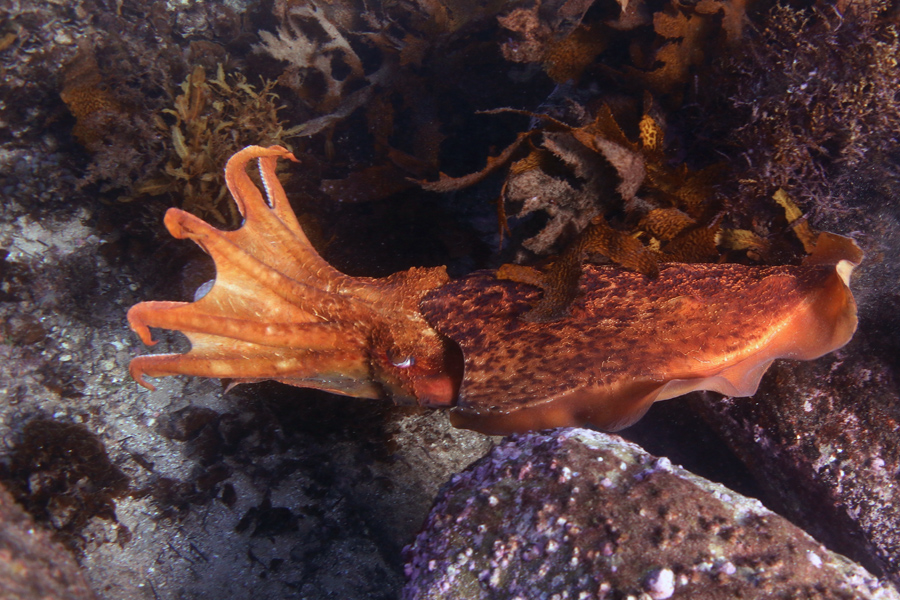 The marked one was back on the 30th. That day, I followed as he went on a long tour. The bay is adjacent to a surf beach, Manly Beach. Giant cuttlefish usually keep to calmer waters in the bay, but this one led me very far round towards Manly. At one point it seemed he might bodysurf in to shore and go up and order a coffee at one of the cafes. It was the furthest towards the surf beach I’ve been on scuba tanks. But then he found a hole he liked in the rocks, drove out a smaller cuttlefish, and settled in. I turned and swam back. 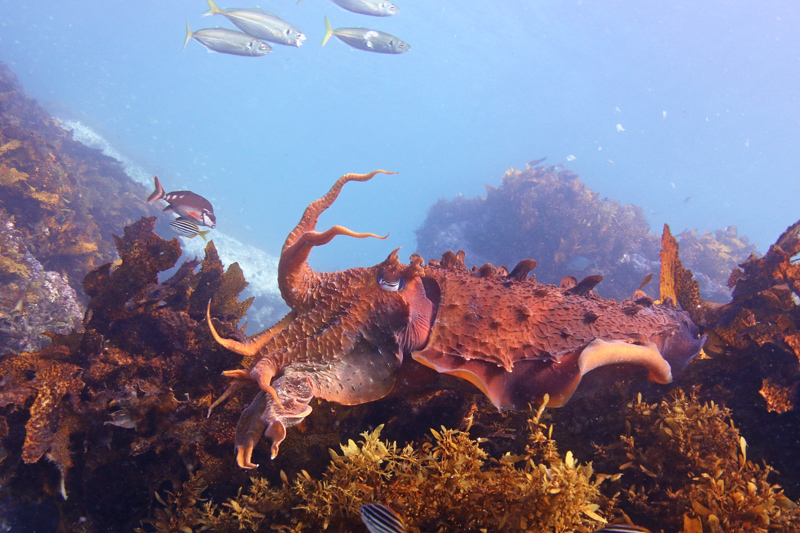 At the end of the earlier post about these animals and the Bower site, I commented on the Australian federal election that took place just after those photos were taken. This ended up being a grim election from an environmental point of view, regardless of what one thinks about other political questions. In my earlier post I criticized the almost exclusive focus on climate change by environmentally concerned people during that election. This most difficult of environmental problems was treated as an emergency, while more local environmental issues were neglected. The left also overplayed their hand and lost the election.

A few weeks after the dives just above, I went up to the Barrier Reef for the first time in decades. The trip was to the Whitsunday Islands, in the southern part of the reef. I had dived there over 20 years ago, and remember it well. I went out again on a commercial dive boat to one of the standard dive sites in that area, Bait Reef. I was shocked at how bad the situation was. Much of the hard coral was dead, in rubble on the ground. On two dives I saw just one healthy blue staghorn coral of the sort that used to be everywhere. There was not a lot of fish life. The scene was sad in the way an empty nightclub is sad: where is everyone?

This site is too far down the reef for rising temperatures to be the main problem. The problem that seemed obvious was water quality. Coral needs clear water. Instead, the scene looked like this: 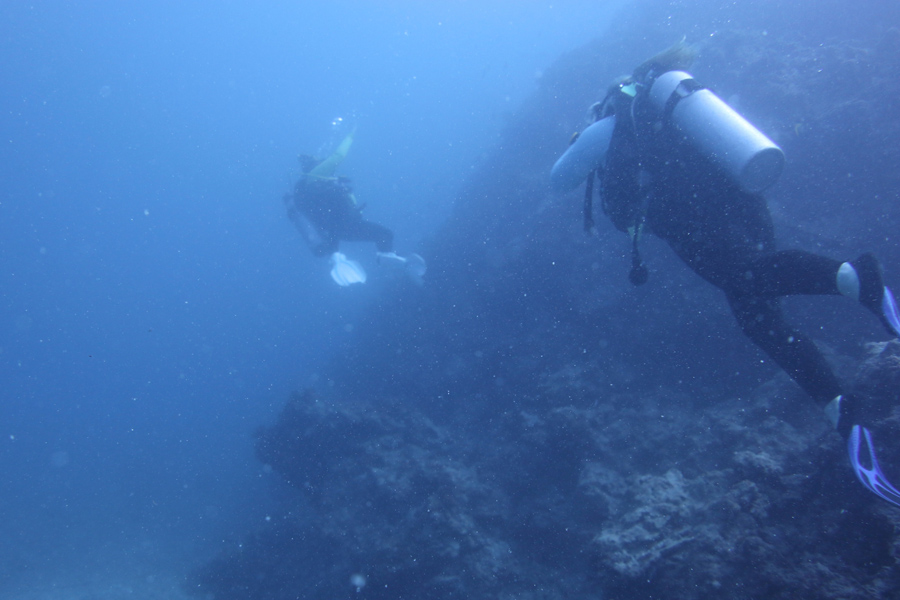 Water like this is being affected by local activities on and around the land – by fertilizer runoff, other runoff from land clearing, and, in some areas, dredging of the sea floor. A little reading revealed that just to the north of this area, at Abbott Point, a notorious program of dredging has been underway. Bad effects on water quality were predicted by various people as the Abbott Point development began – it was predicted here in the Guardian in 2013, and early signs of damage were discussed here in 2015. The area is not looking good now. 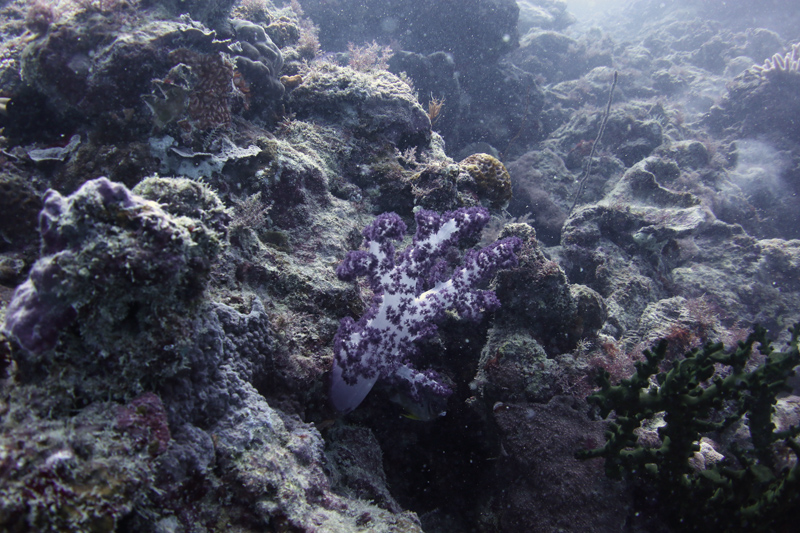 I did see one lone cuttlefish, probably Sepia latimanus, the Reef Cuttlefish.

To add insult to injury, during the very week I was there in the Whitsundays, The Australian newspaper published a front-page story attacking “green activists” for publicising the poor state of the Barrier Reef, and thereby undermining the tourist industry. 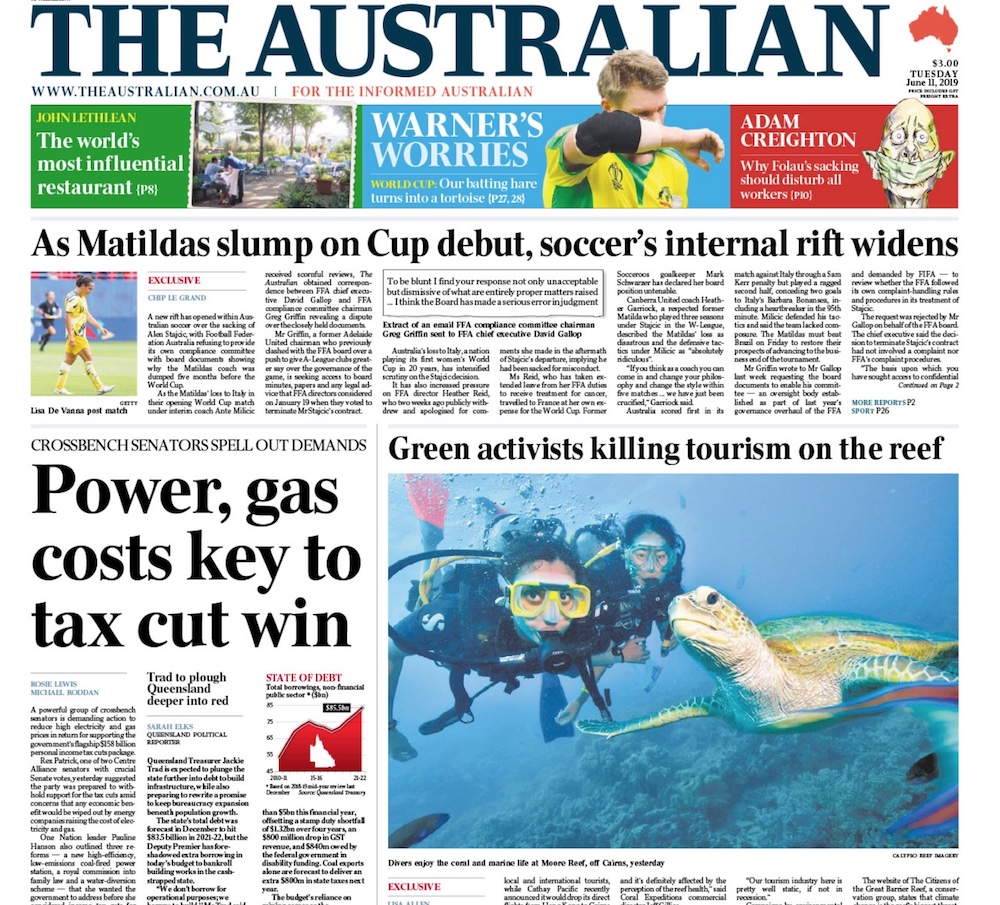 Here is more of the story.

Can you believe it? A newspaper campaigns tirelessly in favor of developments that are a known risk to the Reef, dismissing environmentalists at every step, and then when damage is done and people begin to report on what has happened, the newspaper presents those making the reports as attacking the tourist industry, an industry that relies on environmental protection.

The Australian is a Murdoch newspaper. This article makes the paper look like a complete rag, but it’s not. In some ways it’s a pretty good paper, but consistently a disgrace on environmental issues.

Again, one of the most important aspects of this situation is the fact that much of the damage to this lower section of the reef is being done, very likely, by local activities that affect water quality – by land-clearing, fertilizer and pesticide runoff, and dredging. This damage is being done by activities that could be halted or reduced right now, through local decisions that don’t depend on tenuous international agreements. Australia does need to do vastly better in combating global climate change, but centuries from now, it will also be remembered for its record as local custodian of the miracle in its backyard, the Great Barrier Reef.

More news about the reef, none of it good, is here. The scientific report the story is based on is here.

This entry was posted in Cephalopods, Marine life. Bookmark the permalink.