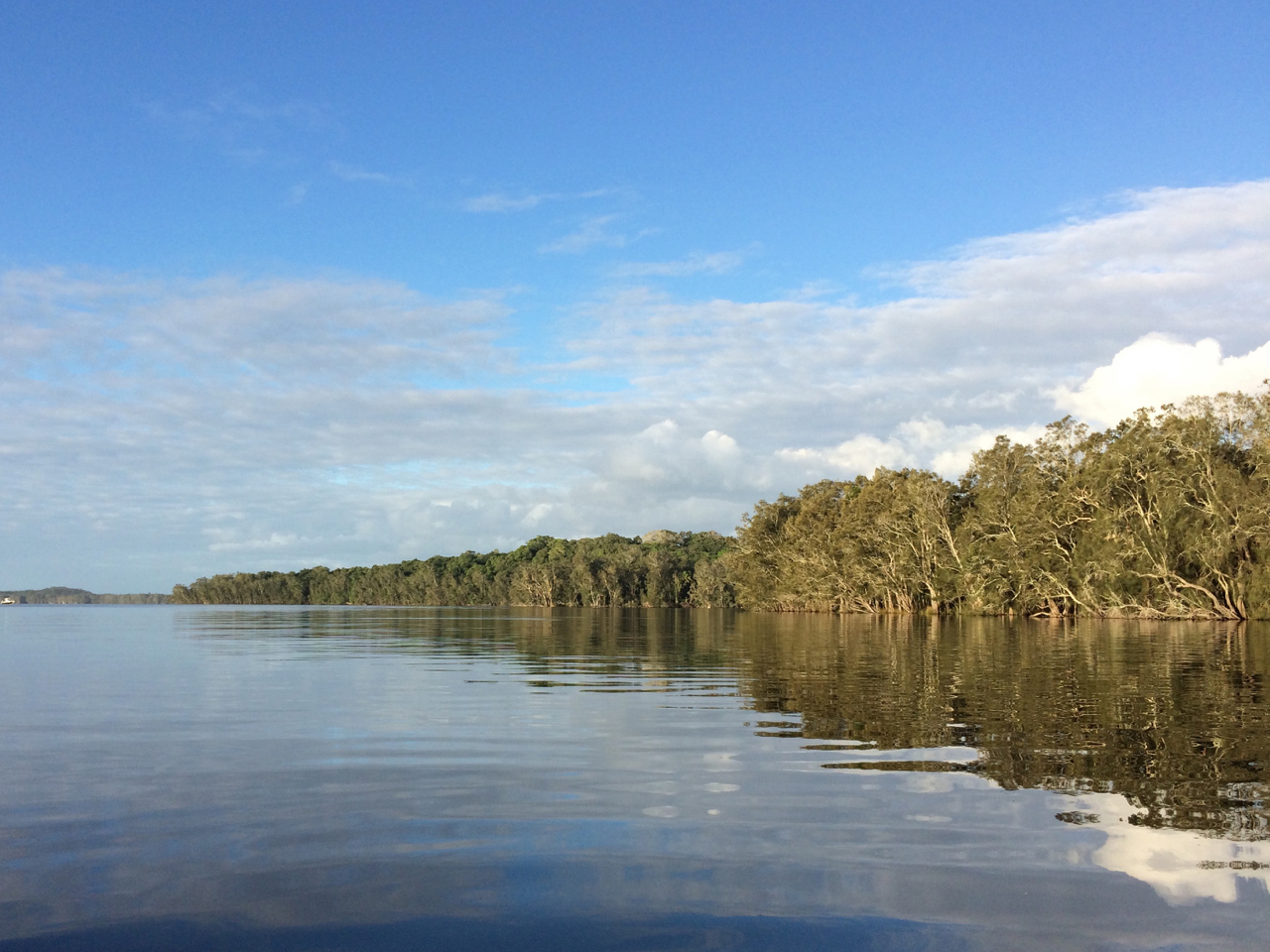 An unexplained terrestrial incursion by several dozen octopuses, walking onto the shore in Wales a few weeks ago, reminded me of a plan to write something on this site about the relations between life on land and in the sea.

The photos in this post were taken last year at the Myall Lakes in Australia – a liminal, borderland place with respect to land and sea. A narrow isthmus separates the Pacific Ocean from a lake system fed by a small river. The water on the lake side is brackish, mixed with salt. The salt level fluctuates as the lakes are fed from one side with fresh water via the river from mountains inland, and from another side by ocean tides that travel miles up the lower Myall River from Port Stephens (just near the Nelson Bay dive sites). Myall Lakes is also the place where, just about 30 years ago, I overnight became an outdoors sort of person, having not been one before. 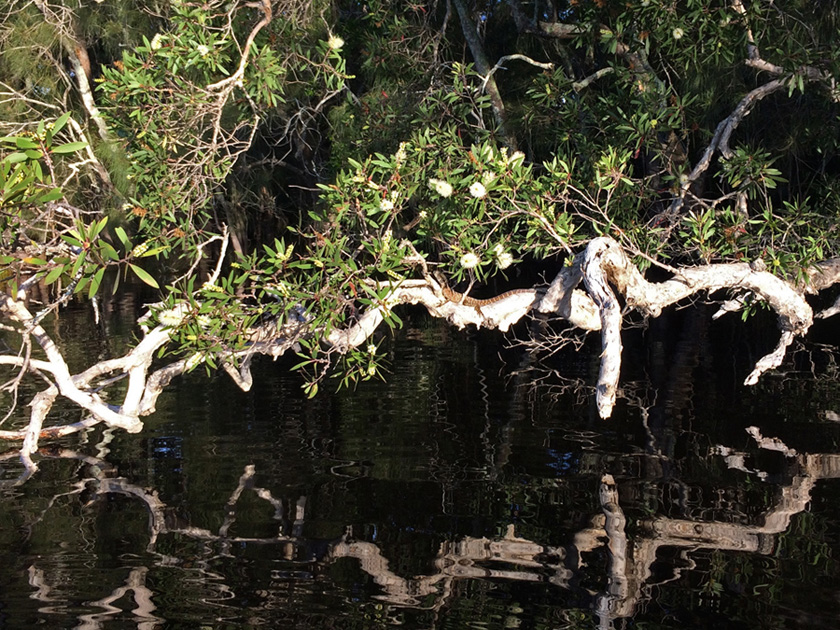 Earlier this year the biologist Geerat Vermeij published a short but very interesting paper about land and sea. The title is “How the Land Became the Locus of Major Evolutionary Innovations,” though the aim of the paper is more to show that that land did become such a locus, rather than to say a lot about how this happened. This a theme that Vermeij has thought about for quite a few years. The impression various people have had is that evolution had a natural early start in the sea, but once the land was colonized, evolution took off in a new way. It produced many more species, first of all, and Vermeij argues in this new paper that the land was also the site of many more “high-performance innovations” than the sea. He argues for this by listing twelve such innovations whose origin can be dated, and asking how many arose on land and how many in the sea. He only considers innovations appearing from the Ordovician onwards – he accepts that all the important early stages took place in the sea [1]. But from there, he says, most of the action took place on land.

Stretched out on the branch in the photo above is what looks like an Eastern Water Dragon. (These are all phone photos taken from a canoe.) Here is a closer look: 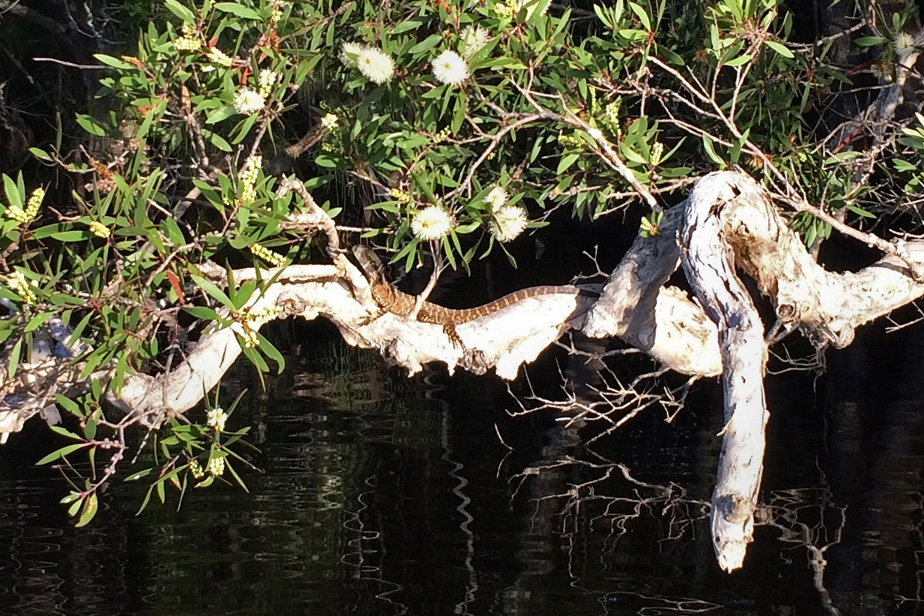 Of Vermeij’s twelve innovations, nine appeared first on land and later in the sea, one appeared at about the same time in both realms, and two have remained restricted to the land. Vermeij uses these cases to make a statistical argument; a “null hypothesis” would predict roughly equal numbers of land and sea origins, but significantly more first appeared on land [2].

I am not sure that the statistical test itself is very meaningful, as the twelve “points” are not independent, but form packages to various degrees [3]. Some are also far more consequential than others [4]. But the statistical treatment is not needed to make the analysis interesting. A different problem is that although he’s talking about features that could, in principle, be found in both contexts (and most of them are), various of the features he discusses make much more sense in one context or the other, and specifically make more sense on land. I found myself thinking, as I read the paper, that he was not always being entirely “fair” to the peculiarities of life in the sea.

The most marked example among his twelve is “aerial locomotion,” or flight. Powered flight evolved at least four times in land, perhaps three times in marine animals (squid and fish), and the land animals did it about 90 million years sooner, despite the sea’s evolutionary head start. The reply I’d make is that all sorts of other marine animals are already flying, in a sense. On land, flight (along with burrowing, and some climbing) is the only way to escape the surface and move in a fully three-dimensional mode. In the sea, swimming and drifting lifts you up and away. Even before fish, jellyfish were flying. The value of motion through the air itself is surely much reduced in a marine environment.

Below is another water dragon (between the trunks), reflecting on land/sea questions. 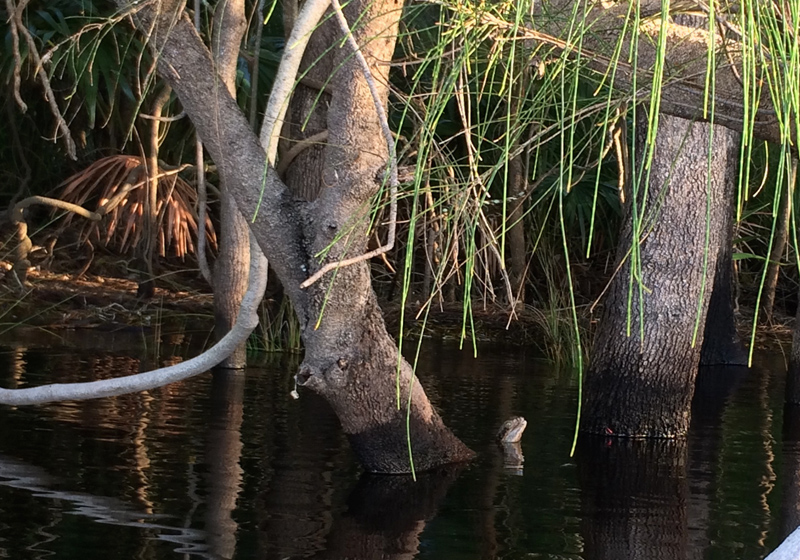 Another example from Vermeij’s list is the dispersal of the sex cells, spores, and other “propagules” of one species by some different animal species. The role of bees in the pollination of plants, and the dispersal of seeds by putting them in edible fruits, are examples. This sort of thing, Vermeij says, is never seen in the sea. I am not sure about the significance of this one. Initially I thought: for the same reasons cited just above, why would a marine organism need help with dispersal of this kind, as gametes and other  propagules can be so easily “broadcast” in the sea? Then I was reminded, in another paper by  Vermeij and Grosberg, of the giant penises evolved by barnacles. These penises – up to the 8 times the animal’s length and hence the largest, proportionally speaking, in the world – enable a barnacle to reach a fair way out to its stationary neighbors to mate. Barnacles are not content with indiscriminate broadcast of their sex cells.

Some of Vermeij’s other cases seem “fairer” as land-sea comparisons. But I don’t yet buy the conclusion that conditions in the sea “constrain innovation” (as he puts it) more than conditions on land. A picture that suggests itself, not so different from what he says, places evolutionary innovations into a historical order in a particular way.

A number of huge, and necessarily early, innovations occurred in the sea – the evolution of animals and animal bodies, senses, limbs, and nervous systems. The sea is the natural context, as well as the actual one, for these sorts of stages. Life is harder on land, given the basic features of living systems. If you can make it there, many opportunities arise, but a different round of innovation is needed to enable such lives. It is not that the sea poses obstacles and constraints – and we have those early marine stages to thank for the brains through which these words are buzzing. But a move to land opens new, albeit difficult, doors. 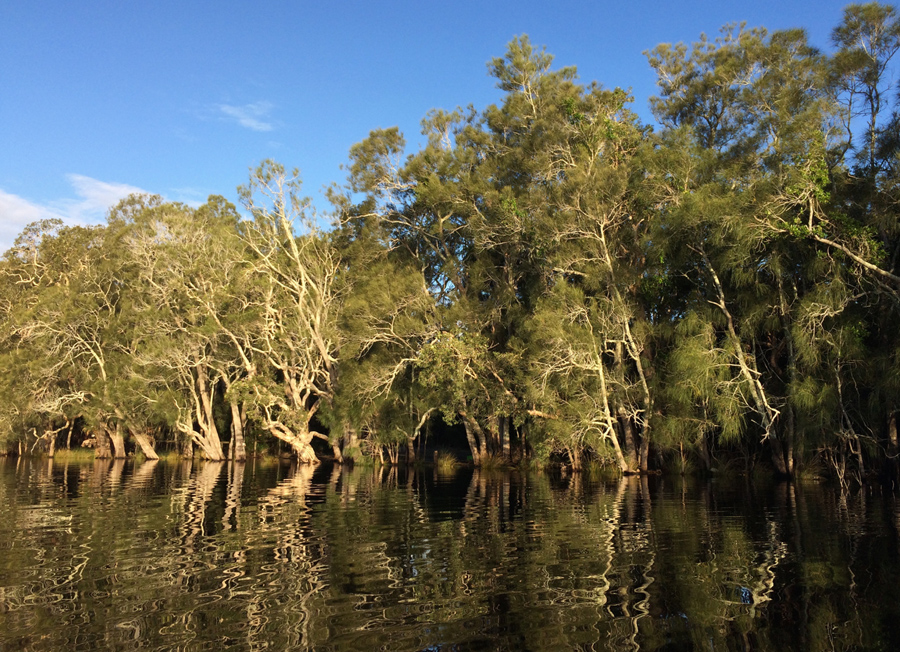 * Here is the most scientific article I’ve seen about the land incursion by the Welsh octopuses.

[1] Vermeij: “Many innovations among multicellular organisms originated in the sea during or before the Cambrian, including predation and most of its variations, biomineralization, colonial or clonal growth, bioerosion, deposit feeding, bioturbation by animals, communication at a distance by vision and olfaction, photosymbiosis, chemosymbiosis, suspension feeding, osmotrophy, internal fertilization, jet propulsion, undulatory locomotion, and appendages for movement.” The list leaves out nervous systems, and perception (as opposed to communication) by means of vision.

[T]the innovation must have evolved more than once and in phylogenetically distant clades. I therefore excluded the turtle skeletal configuration in vertebrates, reduction and loss of digits and limbs in tetrapods, inflation in pufferfishes, the formation of varices and labral teeth in gastropods, shell loss in molluscs, novel respiratory structures in echinoids, opercula in bryozoans, insectivory in plants, wing articulation in insects, silk production in arthropods, constriction in snakes, the liana habit in plants, unidirectional air flow in diapsid tetrapods, the crab-like abdomen and sideways locomotion in crabs, and skeletal tube formation in bivalves, among others…

Of the 12 he includes, the first 9 are found in both contexts, but earlier on land, plant guards may have evolved in both contexts at a similar time, and the last two, animal-mediated gamete/propagule dispersal, and communal construction are (he says) only seen on land.

On the last, I may not entirely agree. If “communal” construction involves many individuals, then I don’t object, but if it is contrasted with individual construction, then the Sleeper Gobies whose burrows I mapped on my earlier website are an exception, as in these fish a pair of individuals works together to build the den. (Vermeij: “Marine animals in many clades individually construct and occupy shells, tubes, floats, mucus nests and houses, byssal enclosures, and burrows, but despite the complex behavior of many cephalopods, fishes, and marine tetrapods, communal building is unknown in the sea.”). I don’t count Octopolis or Octlantis as exceptions, by the way, and we have a new paper coming out on this question.

Here is the statistical claim: “Compared with the null expectation that half of the innovations began or remained restricted to the sea and half did so on land, the observed land-first pattern is statistically significant, with a probability greater than 0.998 (binomial test).”

[5]  For example: vascular anatomy in plants versus animals being recruited by plants as guards.

This entry was posted in Evolution, Marine life, Nervous Systems. Bookmark the permalink.