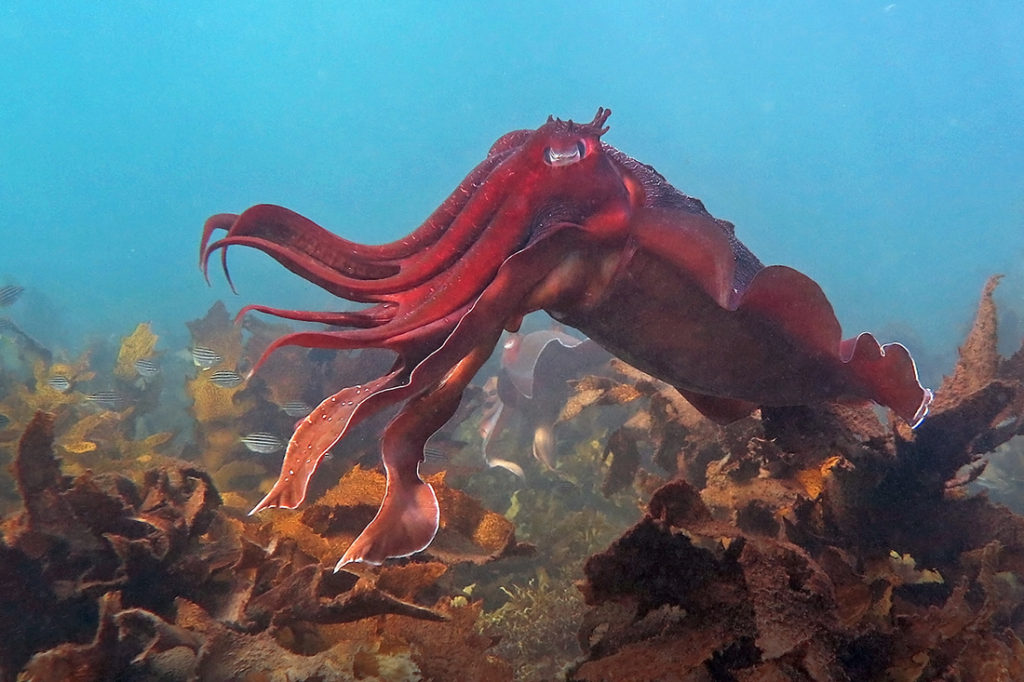 2022 has been a bad year for diving all over my usual Australian sites so far, with torrential rain, storms, and floods. The water became been so bad that the Weedy Sea Dragons, usually safe at 10 meters or so, have seemed imperiled. And a majestic, by all accounts, but nematocystically challenging swarm of jellyfish hung for weeks around Sydney.

At the end of this dismal period, one day last month I went down to Cabbage Tree Bay, Manly, not to swim but to see some friends. To my surprise, the water was sparkling and calm, with the colors of all the different seaweeds visible from the walkway – that is unusual clarity for any time, and for this year, it was amazing.

It was Sunday, so the water was full of swimmers, snorkelers, and divers. I’d brought no gear of any kind with me, and then my friends’ daughter Annabel confirmed, once ashore: yes, the giant cuttlefish were out and about. 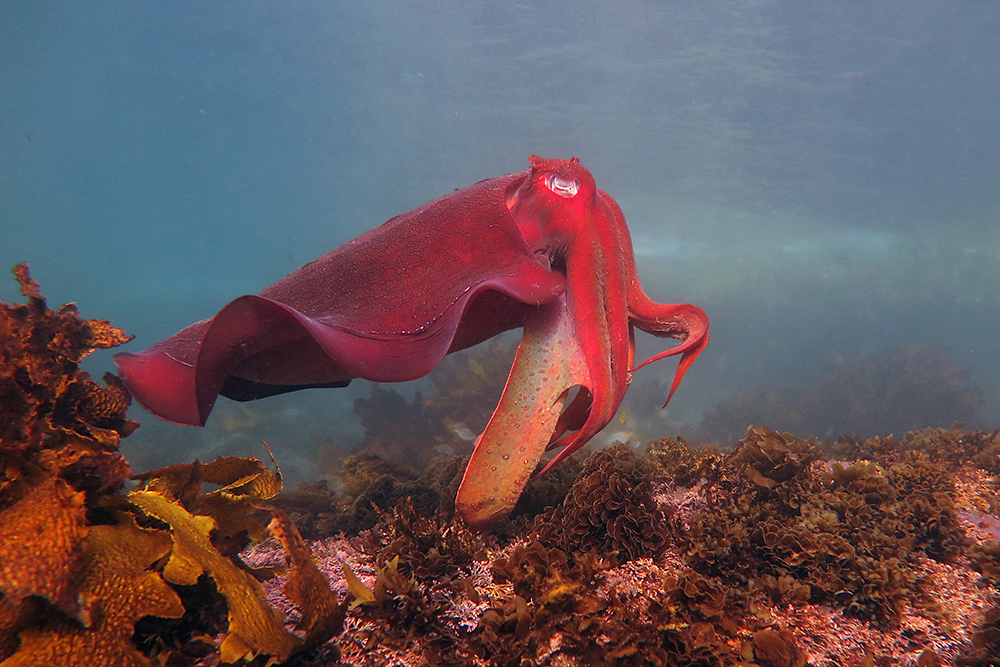 Late in the afternoon I went back to my unit and found my wife’s old snorkeling mask, a now-too-small vest, some fins, and an old camera set-up I used years ago when working on Other Minds – still functioning, and with a housing that seemed to seal.*

I went down into the water in the late afternoon light, and encountered a couple of giant cuttlefish almost right away. Though the sun was dipping, the water was still full of people. At one point a bemused giant cuttlefish was being visited by five or six different snorkelers. The cuttlefish often don’t mind these up-and-down visits, it seems, preferring them to scuba bubbles. And for some reason no divers were in sight at all. I followed a few of wandering cephalopods, occasionally losing one in the rocks and finding another. All the colors, along with the radiant competitive yoga of male encounters, were on display. 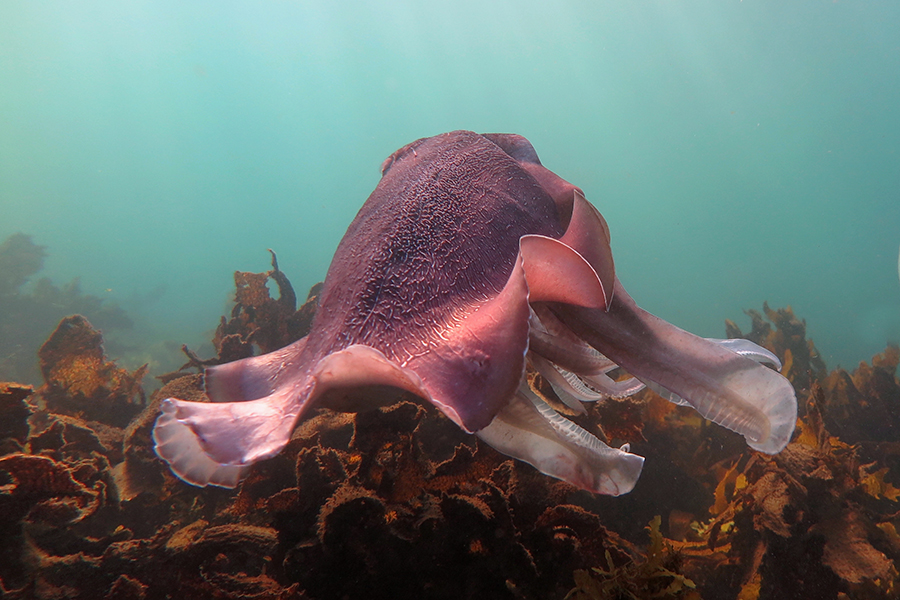 I was pleased that with swimmers and snorkelers of all ages, ranging from serious and geared-up free divers to amazed casual passers-by, not one person bothered any of the cuttlefish. The animals were treated with complete respect by everyone I saw. 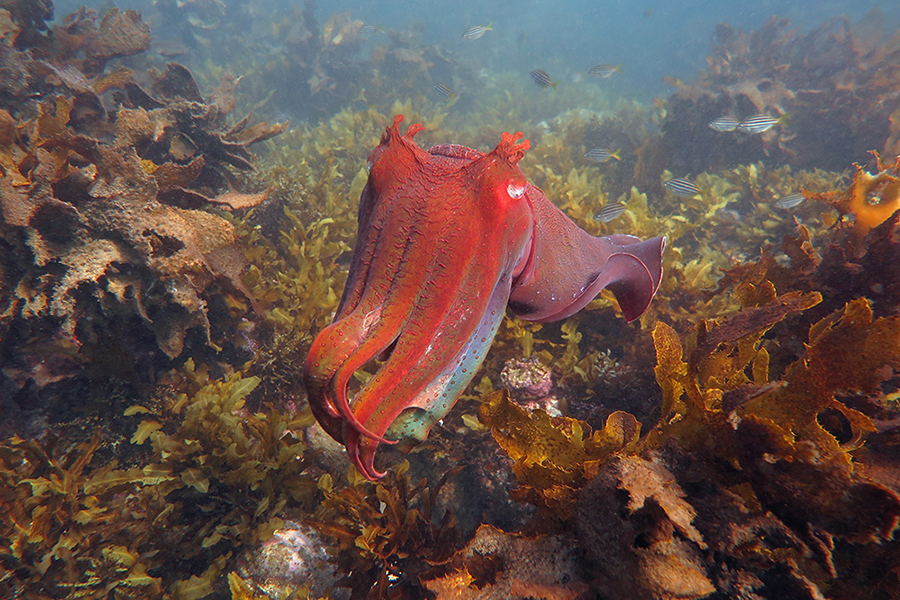 I followed a few of them for a bit over an hour, until I was freezing in that too-small vest. I stayed then with one as it swam away from the crowded area just off from the ocean pool, out through the reef to the open sea. 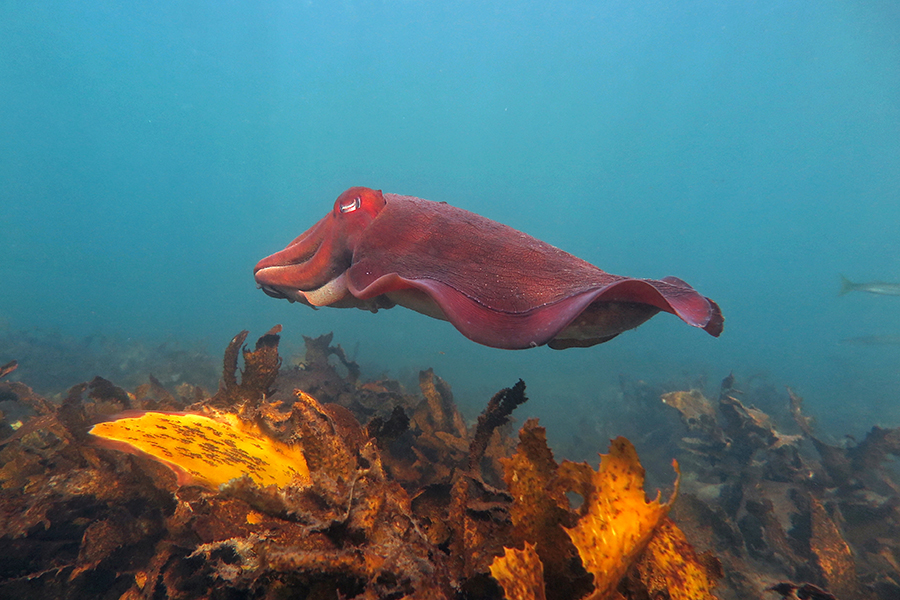 * Canon’s own inexpensive plastic underwater camera housings are much better than some people realize. I never had one leak, they work to 100 feet or more, and they cost about a quarter as much as the metal housings I use now. The metal ones have advantages, but credit to Canon for their commitment to making good and affordable housings for what seems to be almost all their point-and-shoot and one-step-up-from-there cameras. The photos here were taken with a G1X ii.

This entry was posted in Cephalopods, Cnidarians, Color, Marine life. Bookmark the permalink.