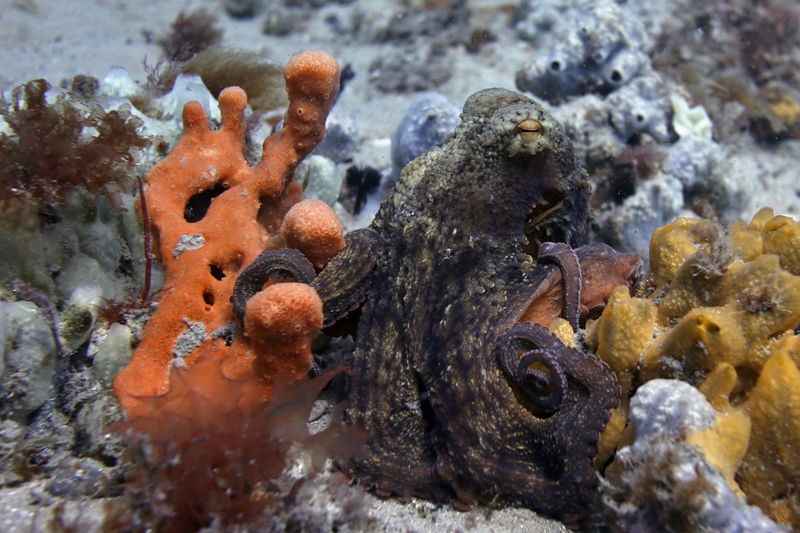 Last week two scientific papers appeared about animals. Both were about particular kinds of creatures, but both bear also on our overall picture of animal evolution. One was an octopus study, where the animals were given the drug MDMA, also known as ecstasy, and the effects on behavior were observed. That paper also did cross-species analysis of a gene affecting the mechanisms that transport serotonin, a brain chemical, into cells, and found that octopuses and humans share similar versions of this gene. The other paper was a remarkable study of the ancient organism Dickensonia, which lived over 500 million years ago (and was discussed in my book Other Minds). Fossils from this time are so puzzling that it has been hard to tell which ones are animals and which might be other forms of life. The new study, based on some miraculously preserved remains found in Russia, puts Dickensonia squarely into the animal kingdom.

Below is a photo of a Dickinsonia fossil, taken at the South Australian Museum and used in a black-and-white version in Other Minds. 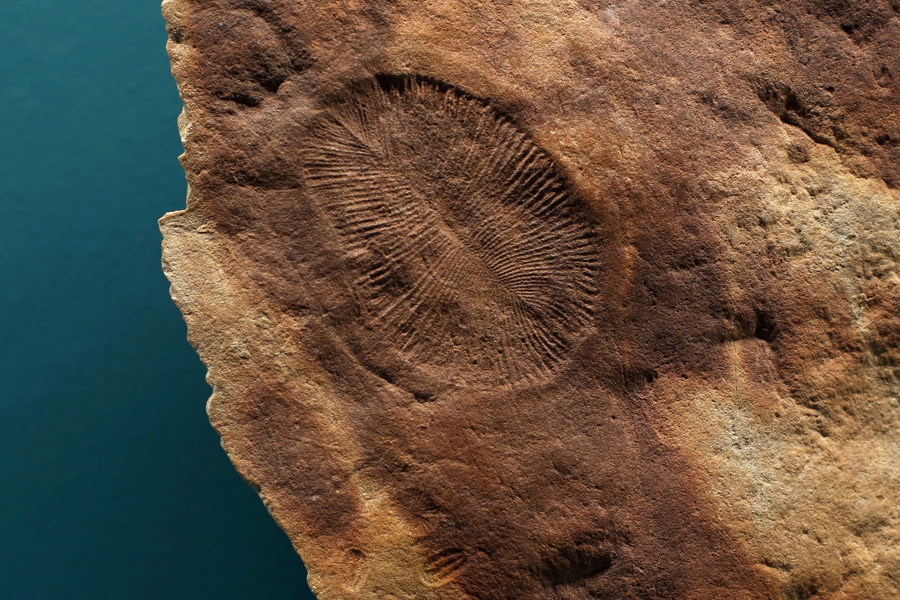 I wrote a short piece for The Guardian about the two studies. I planned to write a follow-up here, filling out the story a little. Since the newspaper piece came out, some correspondence has come in to me about the ethical side of the octopus study. Should this experiment have been done at all? Why didn’t I criticize the work in that respect? I’d planned to look at those issues here along with others. For now, I’ll focus just on the ethical issue.

I think far too much curiosity-driven research is done that is cruel to animals, and work of that kind should be phased out. The octopus study using ecstasy is an unusual case, though, and there is one aspect of it that I find hard to think clearly about.

The first fact to note is that as far as I can tell from the paper, the animals were generally treated humanely, and none were subjected to surgery or killed as part of the study. The genetic analysis that was done does not require killing animals – any tissue sample will do – and the behavioral side of the work was simple: first see how octopuses generally behave when given a choice between visiting a chamber with an inanimate novel object and visiting a chamber with another octopus, then see if they behave differently after being given ecstasy by having it dissolved in their water.

Four animals were used in the part of the study that included the drugs. It does appears from other press coverage that in getting the dosage right, some octopuses were given too much of the drug and subjected to distress. That is a clear minus, on the welfare side. But perhaps it is the only clear minus. The effects of the drug on the octopuses (once the dosage was right) was to make them more inclined to interact with the other octopus, and more playful. These effects of the drug were probably not unpleasant or stressful. When octopuses are stressed, they behave very differently from the ways seen in the experiment. Perhaps the octopuses suffered after the drug had worn off (though in humans, ecstasy is not a drug with a severe aftermath). Captivity per se can reasonably be seen as harmful for many animals, though in this case the conditions are described as “enriched,” and I tend not to think of captivity in good conditions as a great harm for these particular animals.

On the positive side, I think the octopus’ sociable and playful behaviors under the influence of the drug tends to “humanize” them a little in our eyes. I think this is likely to lead to some people being more mindful of their welfare in the future. It suggests that the inner lives of octopuses have some affective, quasi-emotional features of the sort that make our own lives rich.

The study, then, induced much less stress and harm than a huge number of experiments routinely done on these and other animals. The fact that there is much worse work around does not imply that this is acceptable work. But I think there is a particular thing going on in responses to this study, which I will spend some time looking at.

Though the study did not do much physical harm to the animals, it was a particularly undignified procedure to put them through. I said above that the octopus’ sociable and playful behaviors under the influence of the drug might “humanize” them a little in our eyes, but the MDMA study humanized them in a rather comical and undignified way. The octopuses had no choice about whether to go down their unusual experiential path. It could also have ended badly, at least in the pilot part of the study, if the drug had different effects. And the general unattractiveness of making animals “jump through hoops” is accentuated when the animal is put into an unnatural state with drugs.

I am not sure what to make of this line of thought. I do think that some comments on the study overstate the harm to the octopuses, and do so because of the undignified nature of what the octopuses go through. A note to me from an animal welfare organization described the study using the term “torment” – why should people torment these animals? I don’t think it’s likely that there was any torment involved in this work. I think it’s possible, though, to mistake indignity for torment, odd as that seems once the comparison is made explicitly.

A Guardian comment described the work in different terms – the octopuses “should not be buggered about with in such a way.” That is a more accurate characterization of what was done; it was messing around with the animals in an undignified manner, and without much consideration of their preferences. (I am not suggesting that that would always be an accurate translation of “buggered about with,” but I think it is close to what is meant here. Here is a screenshot of this fragment of the comments.) Suppose the drug given to the animals had not been MDMA, but something more prosaic, with no recreational use by humans. I think some people would be less concerned by the study, as the work would look less comical, less undignified for the animals.

Let’s accept that the octopuses were not greatly harmed, in physical terms, by this research and accept that they did not find the MDMA experience very aversive. Should the sheer indignity of the procedure be a reason to condemn it, and avoid doing work of this kind? Does it make the remotest bit of sense to worry about the dignity of an octopus?

Until recently, I would have replied to this question by confidently saying that “dignity” is irrelevant in this context. I’ve become less sure about this, I have to admit. I think the case for distrusting judgments in this area based on dignity is still good, but I am no longer sure.

One possible reason to avoid experiments that have this undignified character is that we could be concerned about their effects on us, on our character. A lot of philosophers have made arguments of that kind, but I have never seen them as strong. Another way to make the case is to say that what is wrong with the experiments that I am describing in terms of indignity is the fact that they are exploitative, and exploitation is bad in general. But I don’t think that “exploitation” is much better grounded than dignity, as a concept with which to assess our treatment of animals. Something that worries me about a move away from asssessments based purely on physical welfare is the fact that once we go down a road in which concepts of respect and dignity carry some weight, independent of considerations of suffering and well-being, it seems to lead to a loss of reason-based constraint, to a situation where quasi-aesthetic responses are allowed a role. Once you are in that ballpark, who knows what people will find apt or proper?

The other day I was reading some old records from the Royal Society of London, a scientific society that dates back to the 17th century.  I was looking for something entirely unrelated to animals, but by chance I came across some reports of truly unspeakable vivisection experiments on a dog. The experiments seemed entirely pointless, though perhaps there was more of a rationale behind them than I realize. The most recent edition of Peter Singer’s book Animal Liberation takes many pages to show that awful and pointless animal experiments have not died out, but were going strong at least when he did the update in the 1990s. This puts the octopus ecstasy experiments in perspective. If the animals could speak: “You can keep the dignity, just don’t do anything terrible to me.”

The octopus photos are a chronological sequence taken at Nelson Bay, a week or so ago.

3 Responses to 68. Octopuses on Ecstasy, and Dickinsonia’s Descent