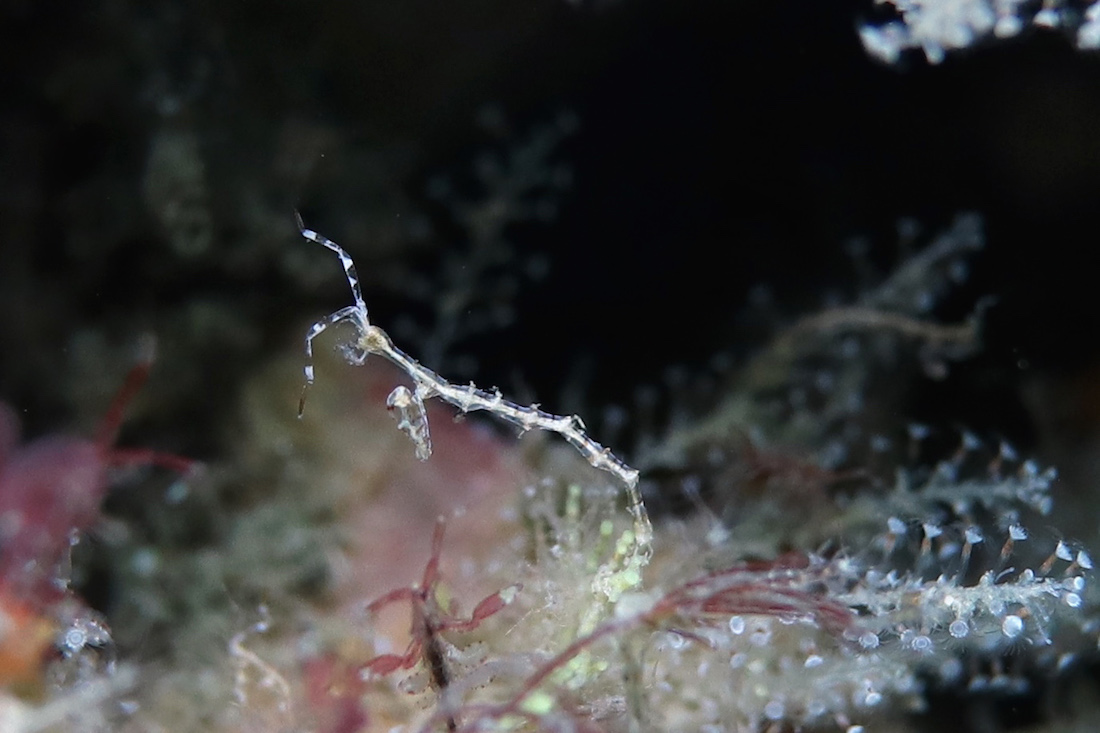 After my accidental introduction to skeleton shrimp, I went back to Nelson Bay to look for them – to look for something I can hardly see, except as a translucent scrap. My approach was to look for motion at the right scale – they move a lot, in a vigorous bobbing manner – take some photos, and later see how I did. The surprise that came out of this is that skeleton shrimp were just about everywhere, on those dives. Once I found one in a photo, I’d find others lurking around it – crouching, interacting, clambering about. Attempts to get a portrait, however, were not very successful. Above is one leaning forward like a praying mantis, to whom they are often compared. Below is a shot that would have been good if the animal had not been hanging upside down and facing away. I became curious, though, about what the sequence of shots that included this animal showed next. 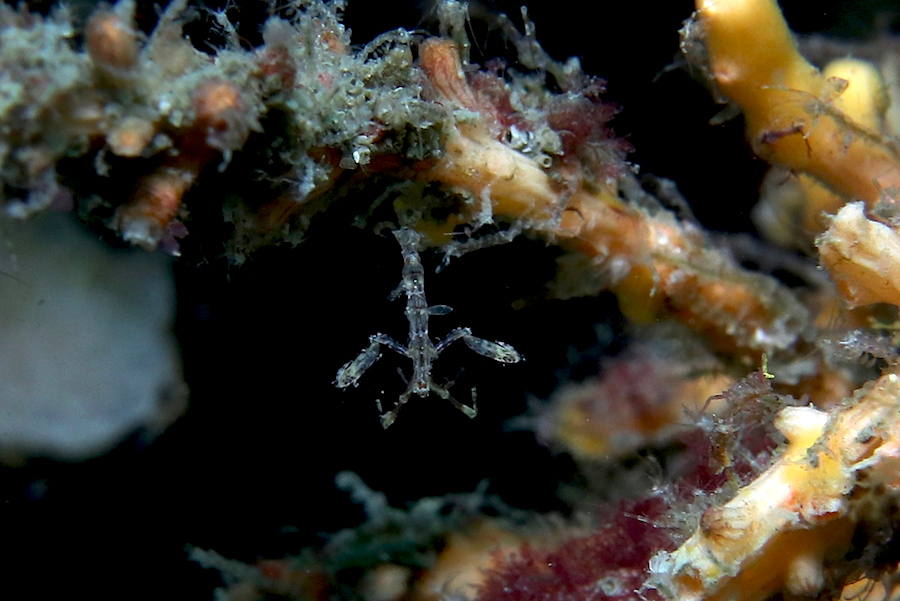 He twisted himself into one of the strange shapes these animals favor. 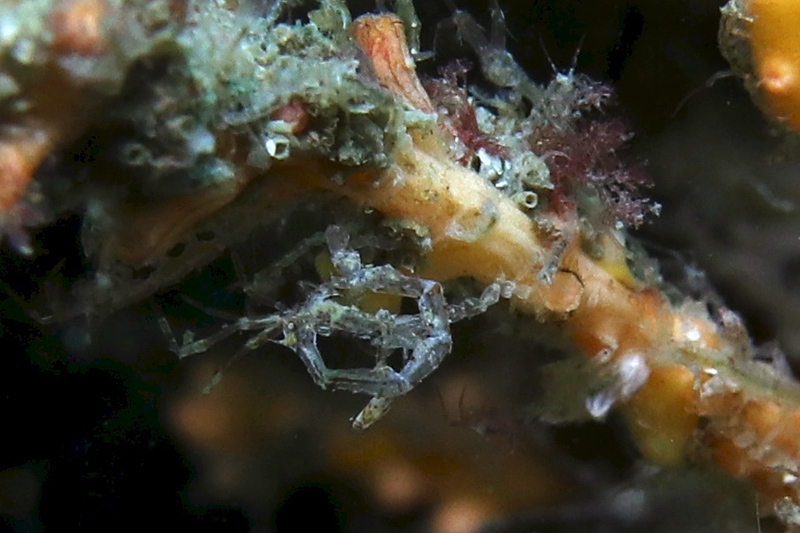 And then: what is the other animal, which looks like a smaller skeleton shrimp, doing on the right?

At least some species of these animals have much smaller females than males, and the second animal looks like a female, from the figures I’ve seen on the web. That raises the possibility of a mating. But those globules on the male that the smaller one is attending to are, I think, gills rather than sex organs. So I don’t know what went on between these two skeletons. Below is the aftermath of the kiss-on-the-gills (and the close view shows a jumble of other limbs of these, or similar, arthropods, all over the scene). 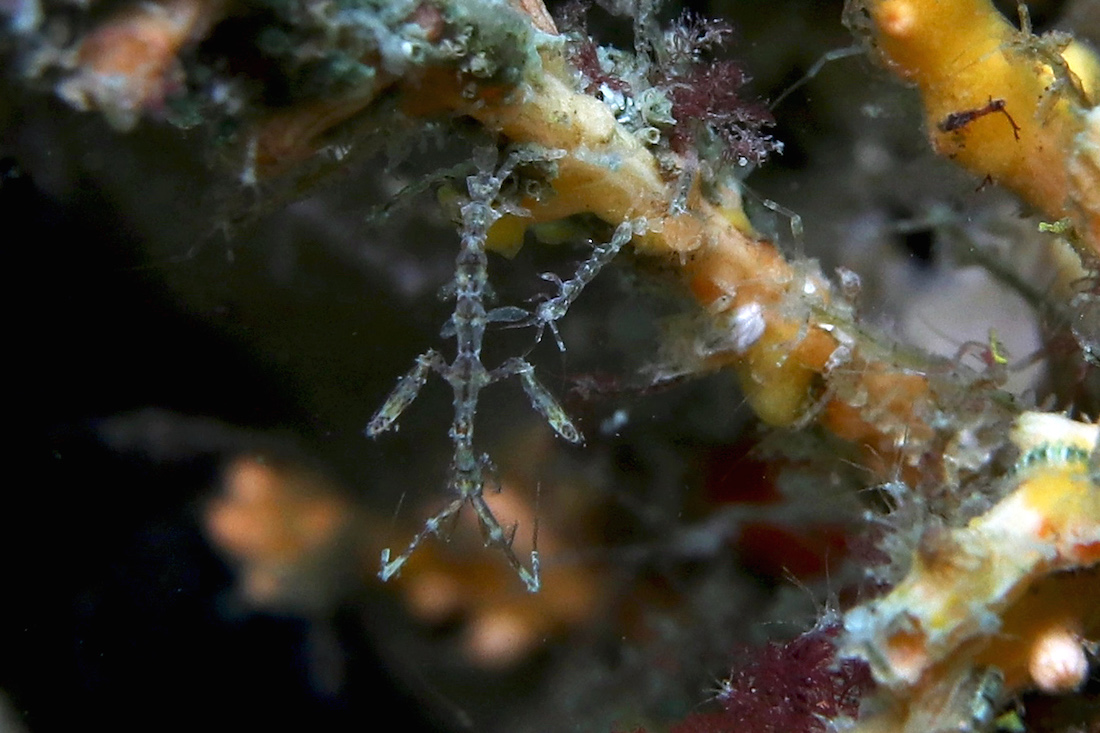 I took some nudibranch photos on those dives as well, and in many cases I saw later that, around the focal slug, there were skeleton shrimp in a little horde in the background. 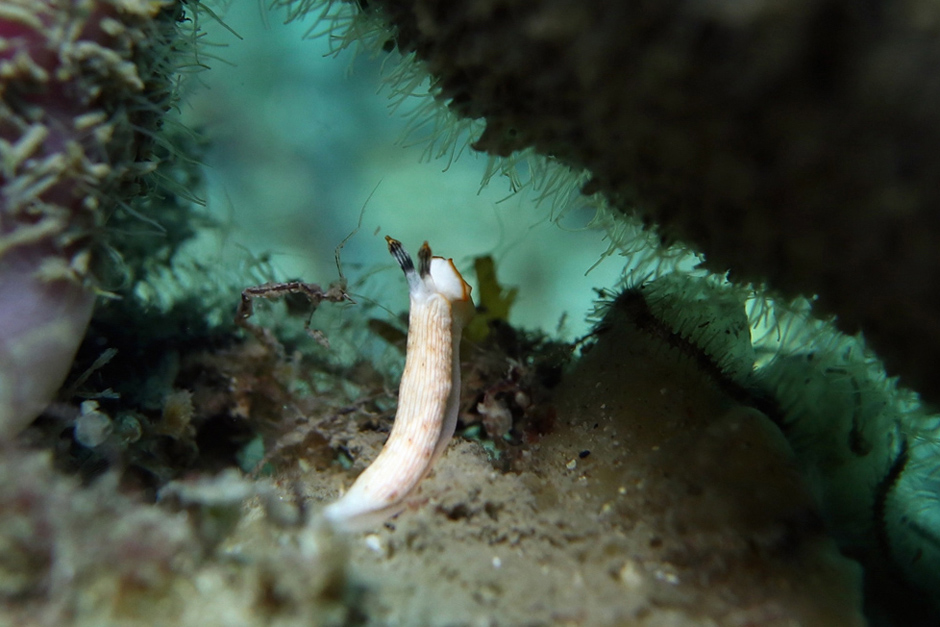 Above is a Dermatobranchus primus (I think), with a skeleton looking over his+her shoulder. Below is Verconia alboannulata, haunted from above. 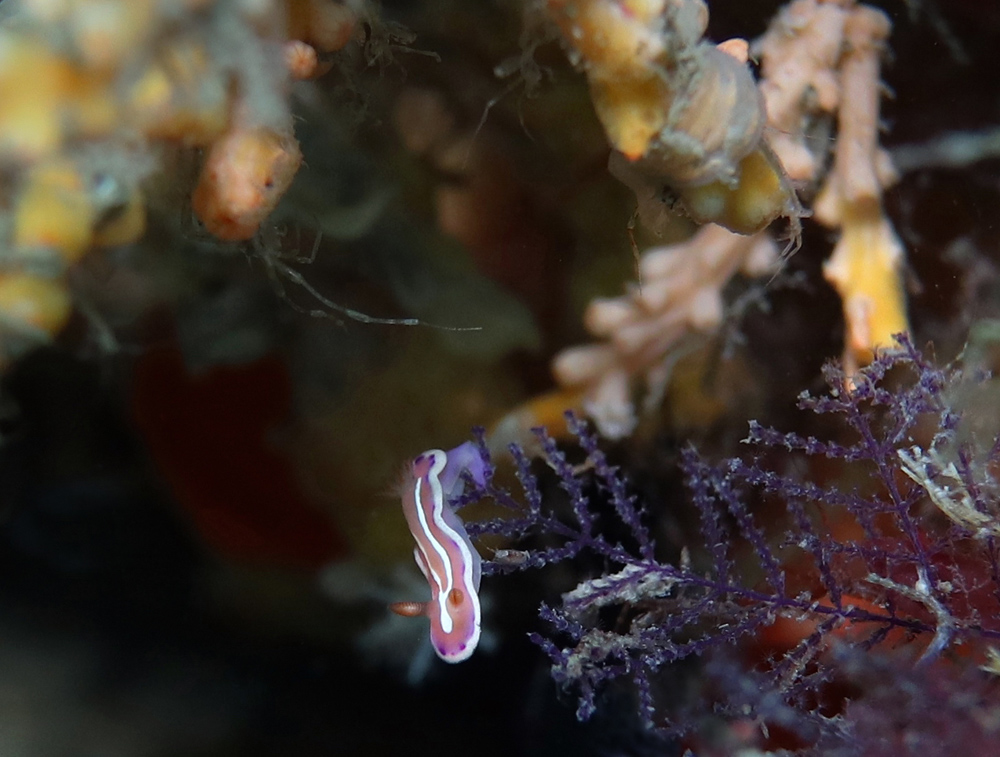 All this was also a reminder of the ecological success of arthropods. On land, insects are everywhere. In the sea, they are not quite so obvious, but can often be seen – I now realize – if you look closely.

1. I still don’t know the species of the skeleton shrimp. The genus is Caprella, apparently established by Jean-Baptiste Lamarck in his Système des animaux sans vertèbres (1801). Skeleton shrimp are amphipods, rather than shrimp.

2. This week saw the release of an open letter, that I signed, about the treatment of some other arthropods – lobsters and crabs – in restaurants and shops in the UK. The letter was organized by Crustacean Compassion. The aim is not to prevent crustaceans from being eaten at all, but to introduce consideration of their welfare into their handling and killing. The boiling alive of lobsters and crabs is a central example of what should end. The arguments behind the letter (which are outlined well in this briefing) center on the now strong evidence that at least some crustaceans can feel pain. Robert Elwood has been a leader in these developments. I discuss his work in chapter 4 of Other Minds.

* UPDATE: The Guardian now has a detailed and well-written article on the issue.

This entry was posted in Arthropods. Bookmark the permalink.