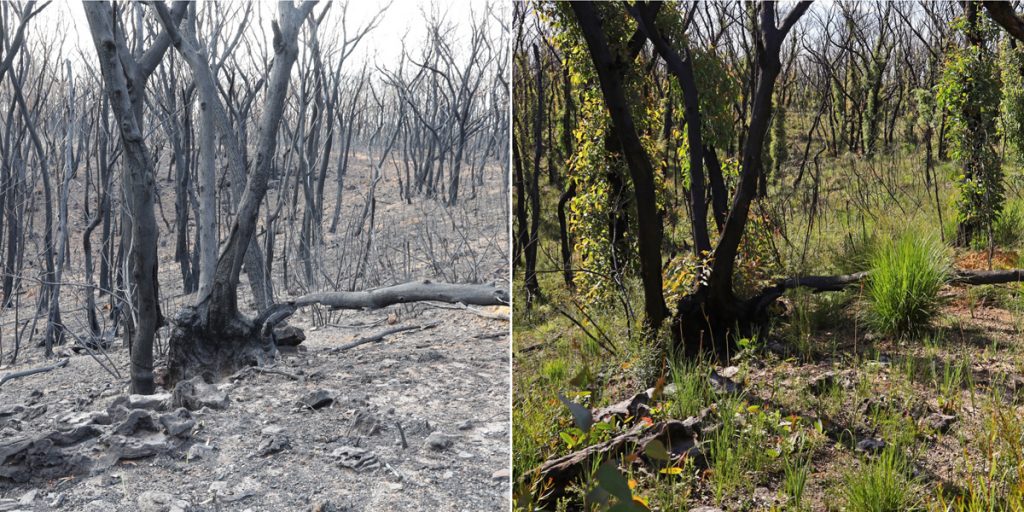 It’s been a while now since the Australian fires of 2019-2020. The summers between have been cooler and quieter. This post is a photographic essay, longer than other posts on this site, and the photos are from 2020. They record the immediate aftermath of a fire, and subsequent regeneration, in an area in the Blue Mountains, west of Sydney.

I went up along Hat Hill Road in January, a few weeks after the peak of the destruction. The entire area was covered in grey ash, and hot spots were still smouldering. 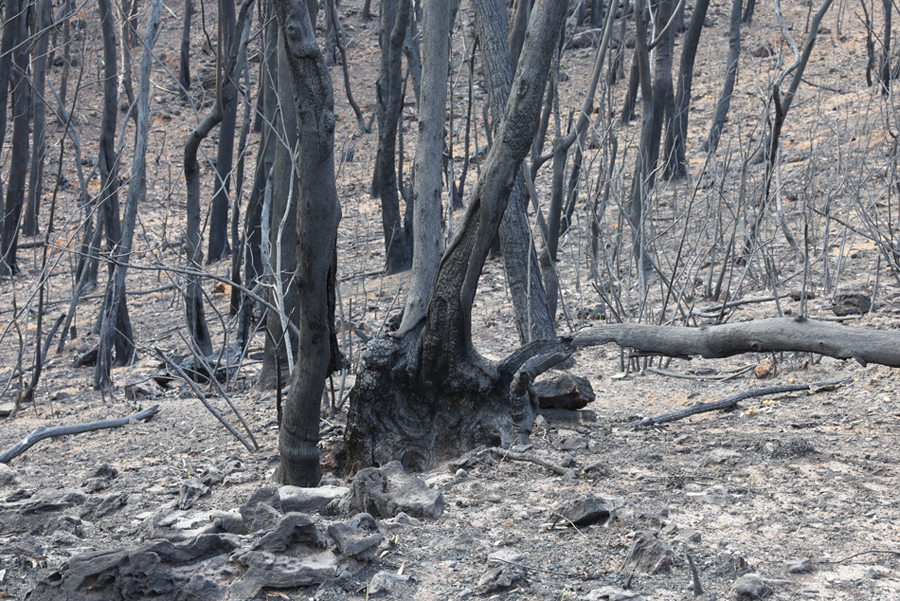 Few signs of life could be seen. I decided to go back to the same spot regularly and take a series of photos over the course of the year. The tree I chose was not too close to a path or road, and would probably remain undisturbed through this time.

Two weeks later, in February, there were some tiny flashes of green (lower right), 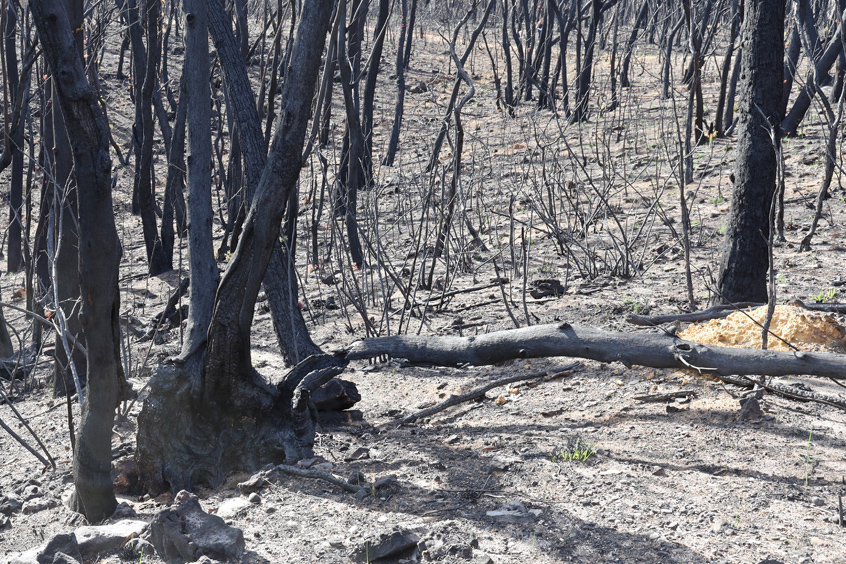 … and a few nearby trees showing first signs of recovery. Those red sprouts are eucalypt leaves. 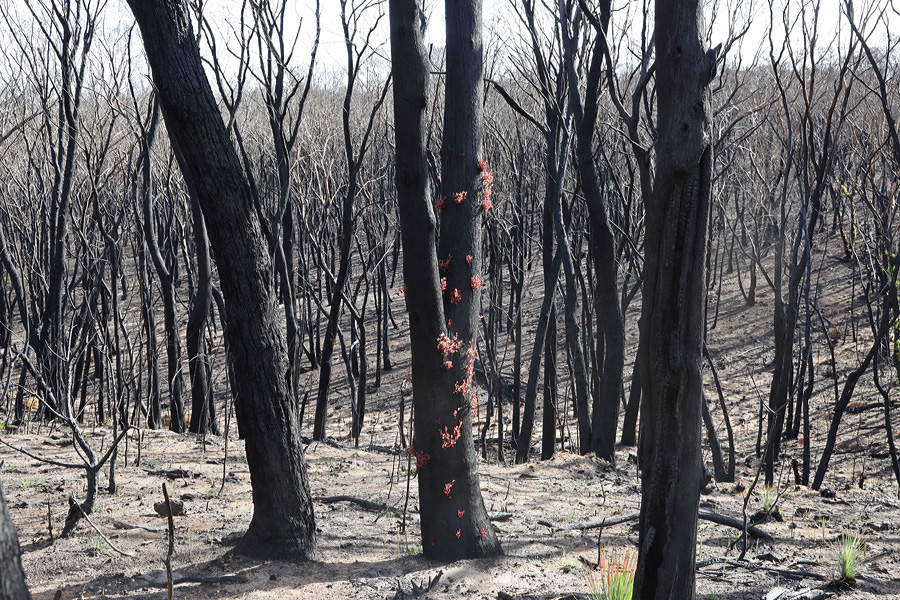 Animal life still seemed scarce; I saw very few birds and no mammals or reptiles. The exception was ants. With undergrowth gone and trees blackened, ants became easier to see, and they roamed around like inheritors of the shattered landscape.

I spent a bit of time accompanying these ferocious Myrmecia – bull-ants – on their solitary foraging trips. I would see one on the dark trunk of a tree, and follow. 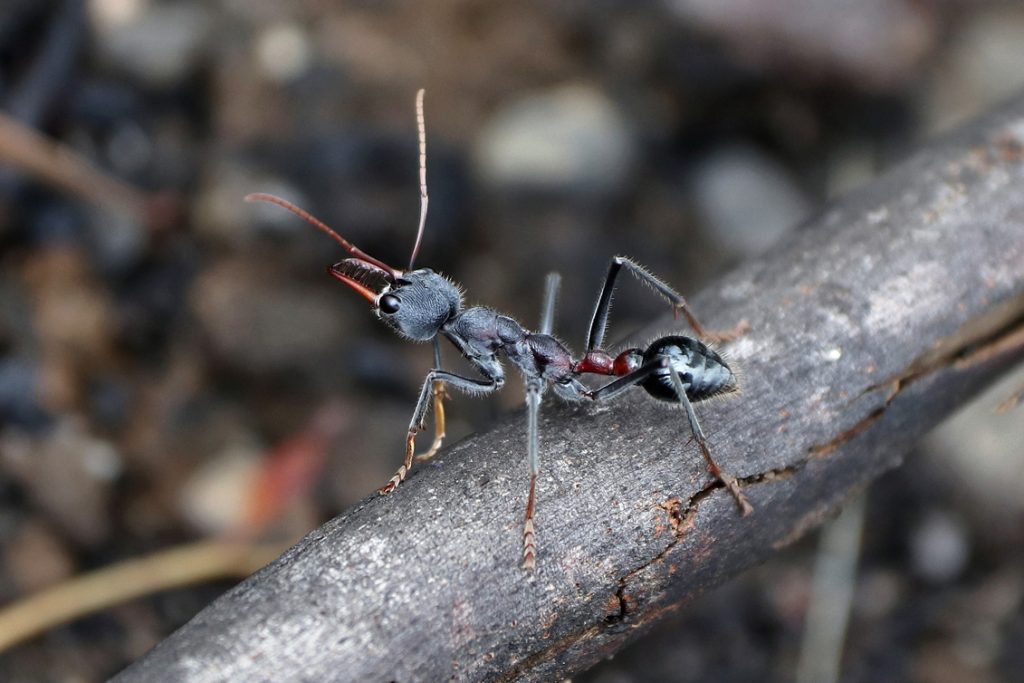 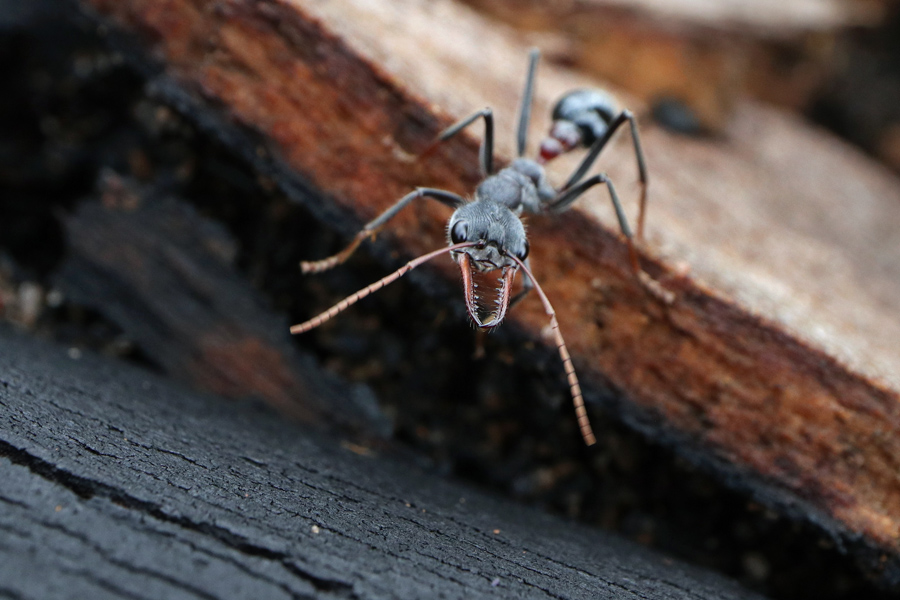 Another sign of animal life, this one a little unnerving, was a lot of spider dens on the bare ground with elaborate trip-lines fanning out from them. They might be funnel-web spider dens – the usual photos on the web do look more thickly webbed than these, but perhaps the outer parts of the webs burned off and the spiders repaired the trip-lines before the rest. Funnel-webs can kill humans. The many revealed dens made me wonder whether funnel-webs are more common than I’d realized. Or perhaps it’s another trip-line ambush species. I walked carefully. Along with the ants, I saw various spiders, and their webs, before I started seeing other animals. The arthropods seemed quite at home.

Onwards, into the fog of March: 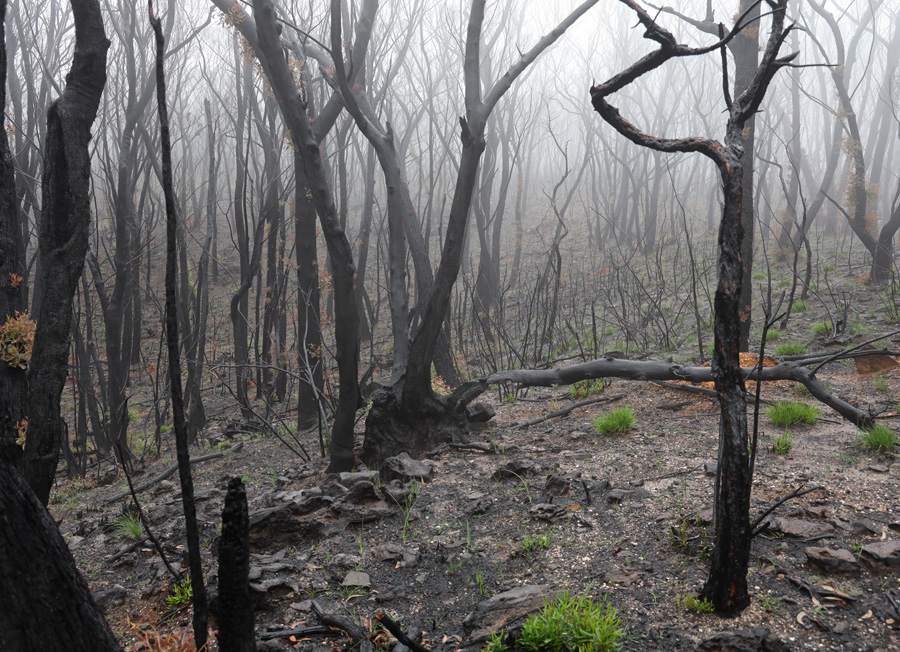 Through this period, many of the trees gradually shed their scorched external layers, leaving them in pieces on the ground and revealing new white bark beneath. This is from April: 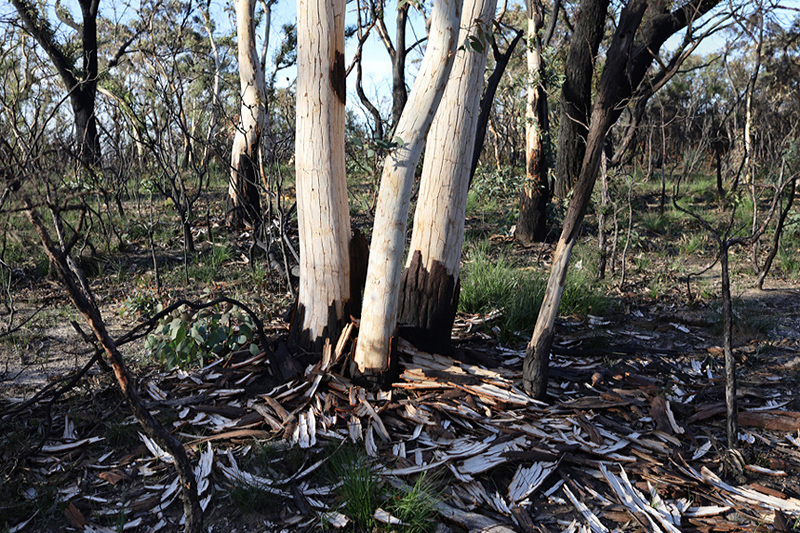 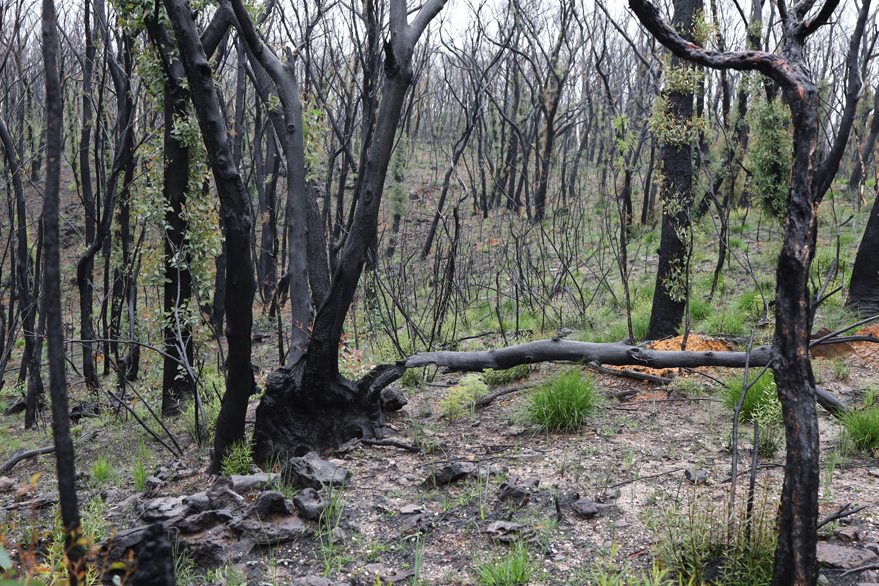 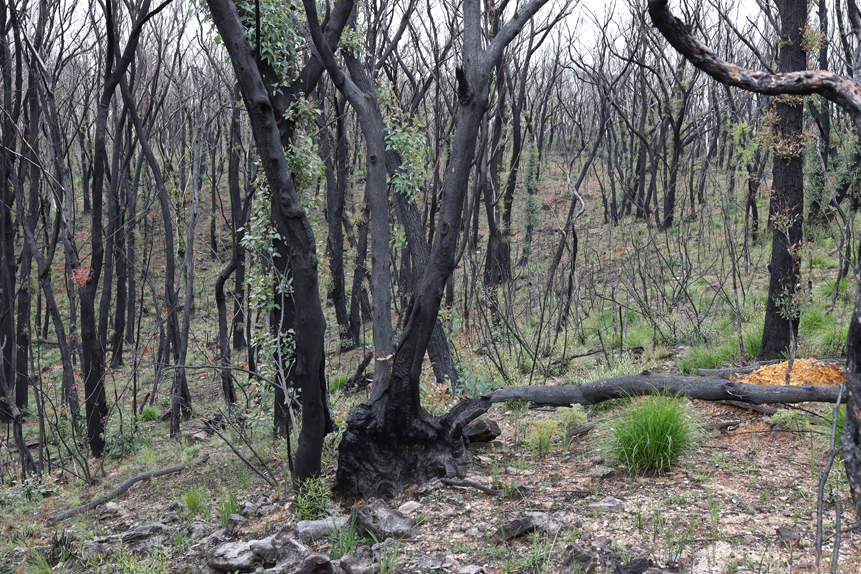 And then we headed into spring. Here is a subdued day in October. 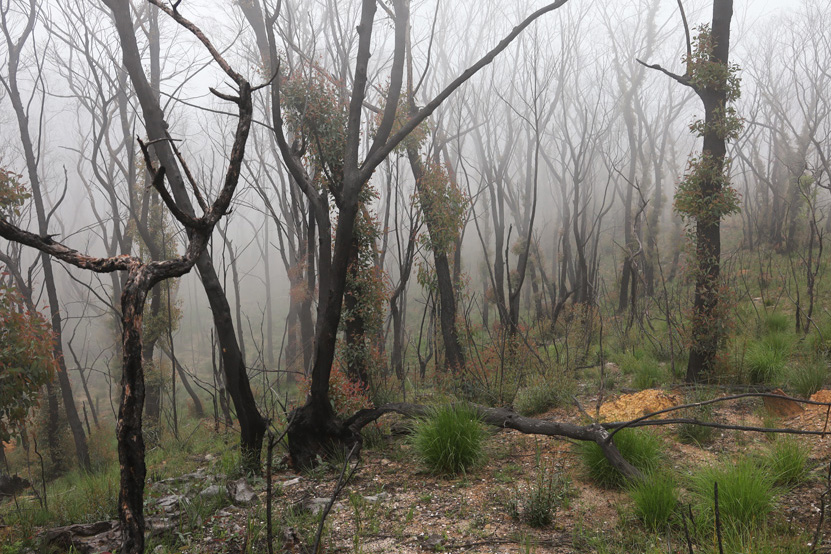 By this time I was seeing birds again, along with wildflowers. 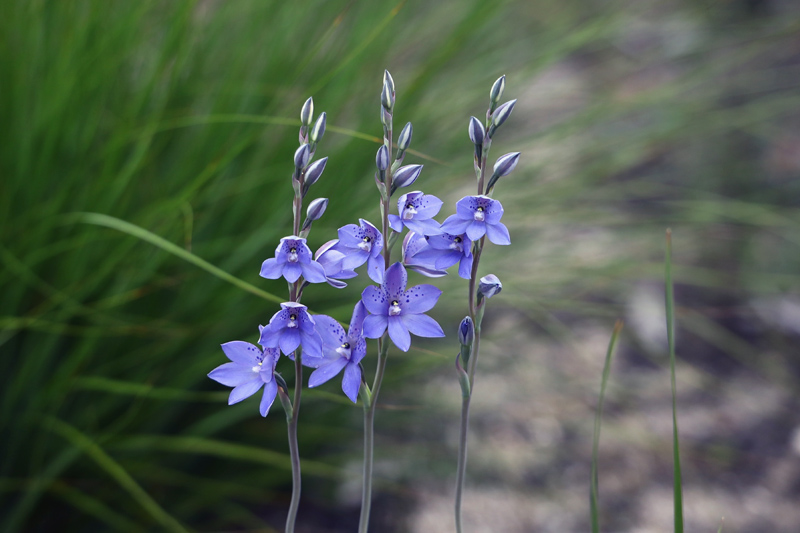 A November photo is the right-hand side of the two-panel image at the top. The last photo I took was in December, by which time, I’m glad to say, it was quite hard to find the spot, as the last part of my path in to the tree was completely overgrown. 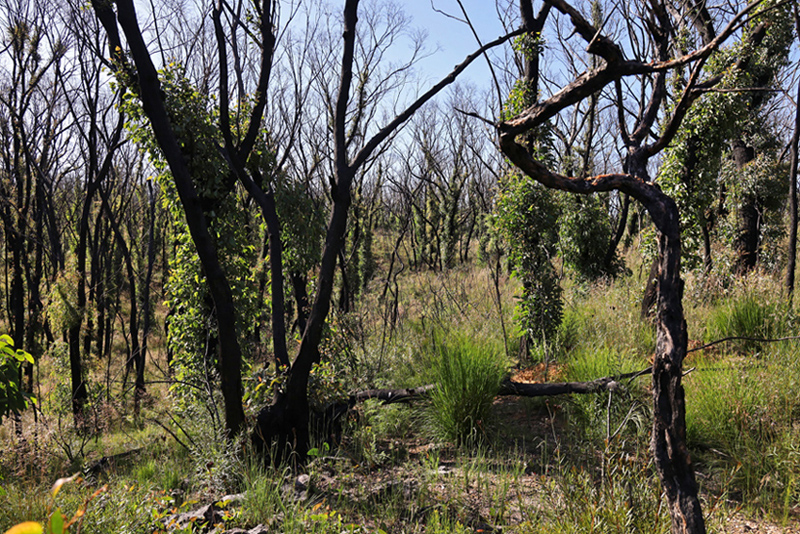 This entry was posted in Arthropods, Environmental. Bookmark the permalink.