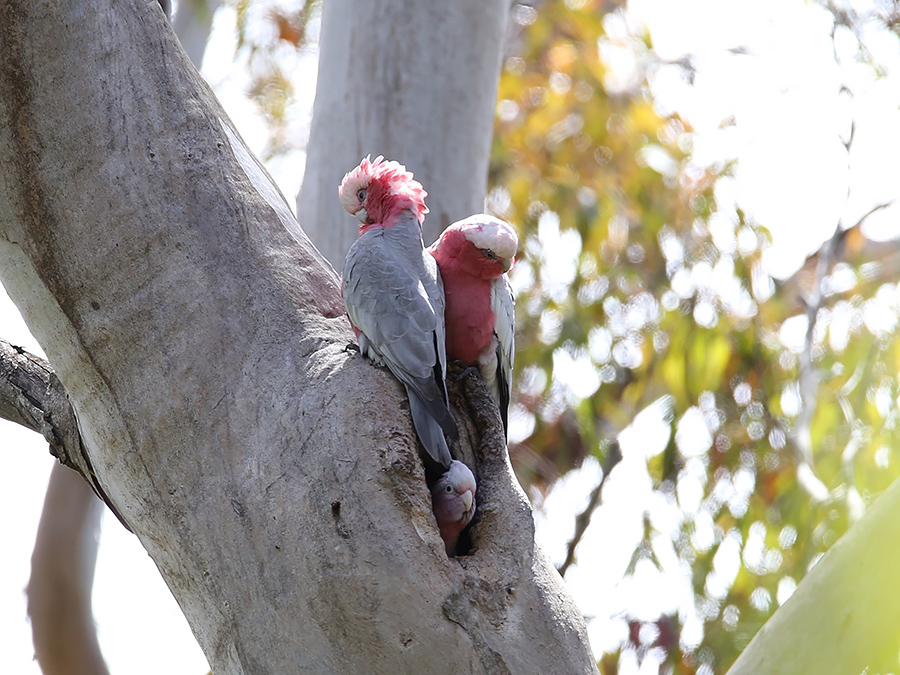 Between April and late August last year (2021), I watched a pair of rose-breasted cockatoos, also known as galahs (rhyming with “alarm”), doing what looked like the preparation of a nest in a tree down behind our house. The first post I did about them is here. It includes a record of combat with other parrots. That post was followed by this one, and another.

Initially they came and went a lot, then appeared to definitively move in, and then suddenly disappeared, some time in late August.

I think the abandonment may have been due to a small but noisy building project, near our place and closer to them. I was sad to see them go.

Then, on August 6 of this year, a pair of galahs appeared again, right in the same spot. That was almost a year since the departure; I am very curious, of course, about whether it is the same pair back again. I can’t tell, and don’t feel I can be confident either way. These two pairs are strikingly similar in how they comport themselves, but perhaps all galahs behave like that – I have no comparisons. I’ve failed to find distinguishing marks (and again would have difficulties with comparisons). So I hope, but do not believe, that they are the same individuals. 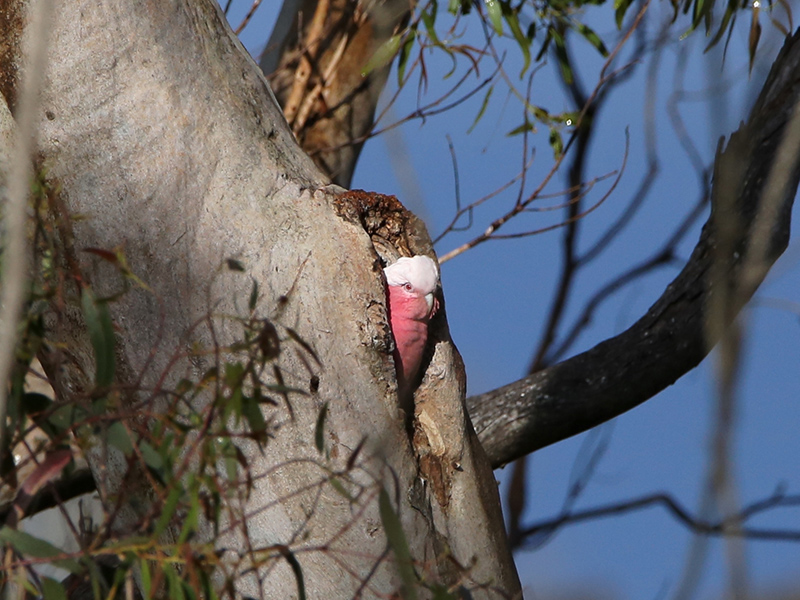 They turned up on August 6, on the day I sent in to the Times Literary Supplement a review of two books, one of which is about parrots – The Parrot in the Mirror, by Antone Martinho-Truswell. The final paragraph of the review included a sketch of the lives of galahs, and of the two I could see (with binoculars) from the desk at which I was writing.

Over the next few months, the galahs again did a lot of apparent nest preparation in the tree hollow. They would cut and bring in small very branches with clusters of green leaves. On one occasion I saw them mate, just outside the nest.

Then I stopped seeing them again. My suspicion at the time was that an unusual cold snap had driven them away (and I feared may have harmed some eggs or chicks – overnight it went to zero celsius, which is very unusual in late spring here).

During this time, some other parrots – a pair of crimson rosellas, one with immature colors – began poking round the nest, and I wondered whether they would take over. 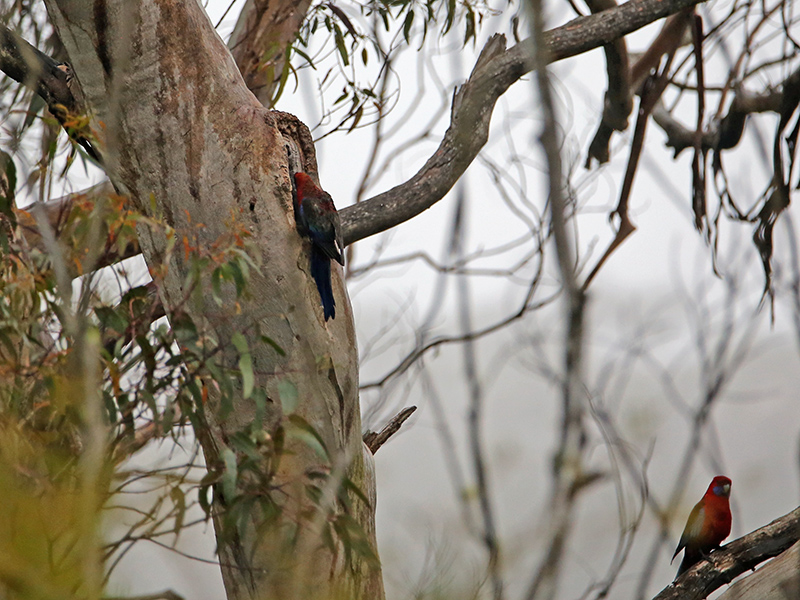 I am writing this post in a bit of a hurry and want to go back and sort out the exact chronology of the departures, rosella visits, and so on (I do have records, but they are a bit of a mess). The point of this post, though, is to celebrate what I saw a bit over a week ago, on December 16. I saw the galahs hanging around, a bit busier than usual, and then, suddenly, another much smaller head appeared, peering out of the tree hollow. I took the photo at the top of this post, and, of course, many others. 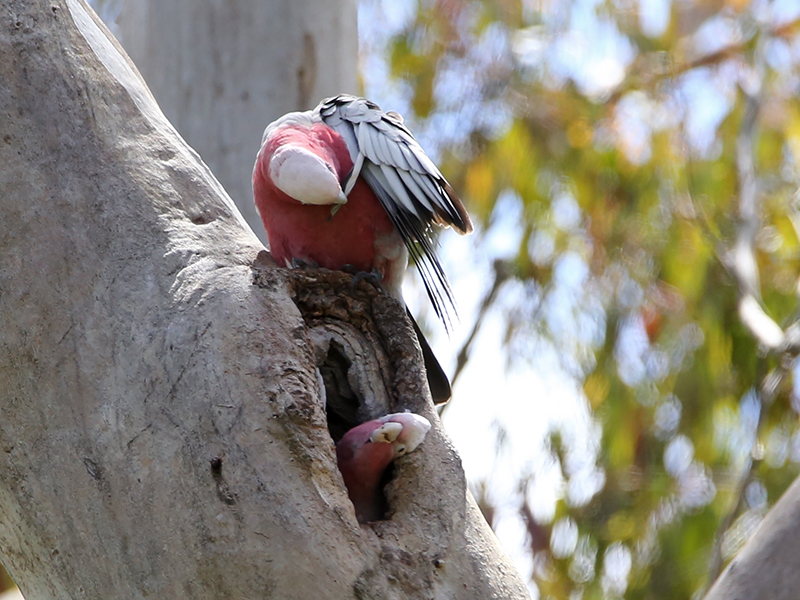 I was delighted by all this, of course. I had to rush off for an overnight trip, but watched them as long as I could, and after a while there was another surprise. 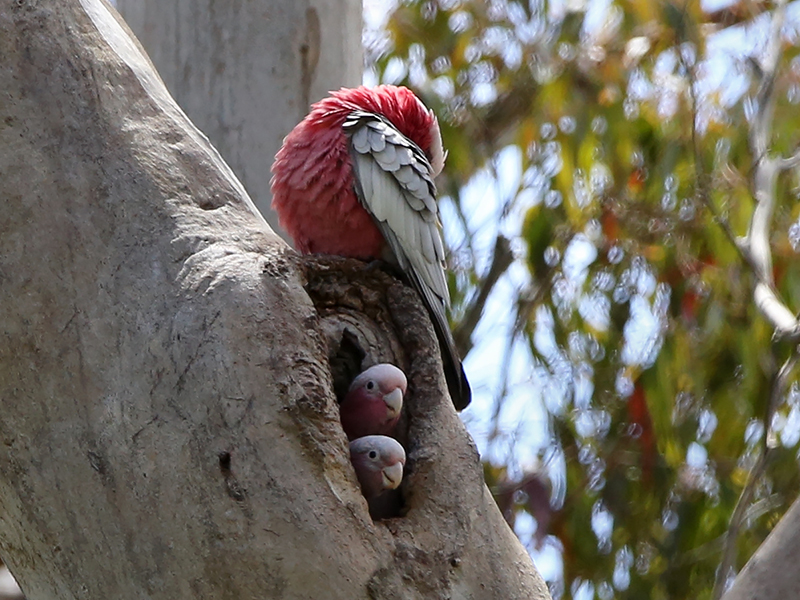 Two little heads, not one.

What fantastic birds they are. 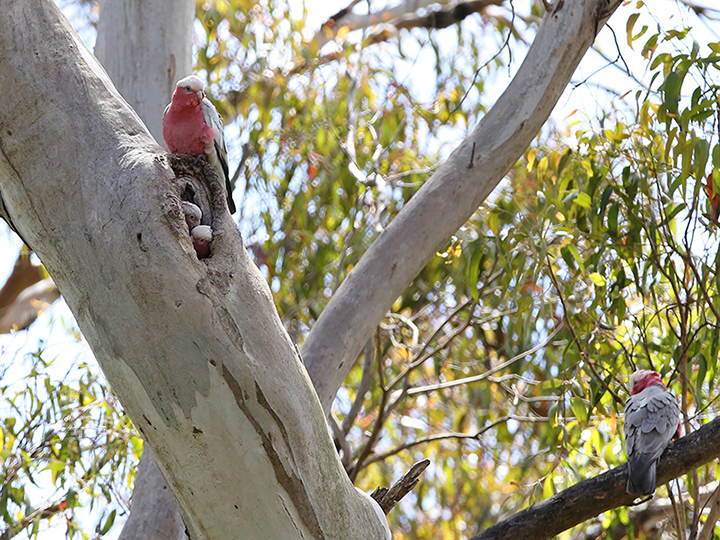 More to come. What were the rosellas doing during the time when I thought the galahs had gone but, I think, must have been inside brooding the eggs? I have been watching the chicks’ development over the week, and quite a lot has happened in that time. I also need to sort out the chronology of some events and sightings. And can I perhaps work out if these are the same two from back in 2021? 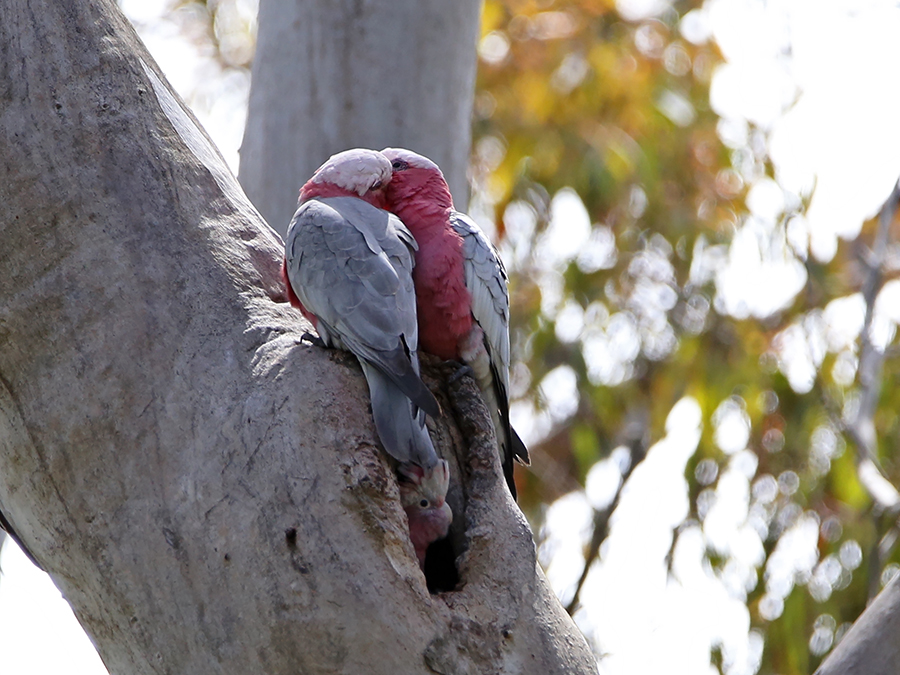 Posted in Birds | Comments Off on 105. Cockatoo News