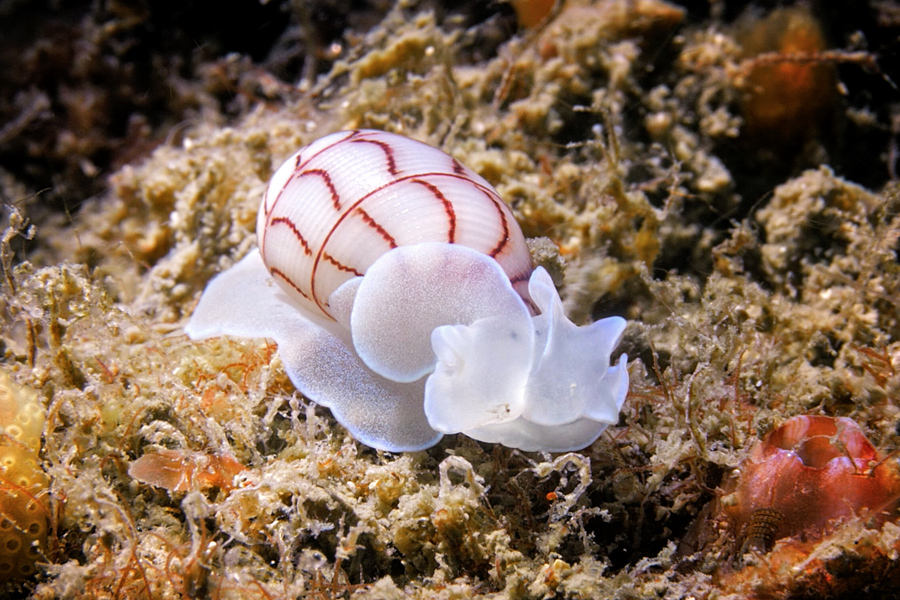 The image above is from a video taken by Steve Winkworth at Nelson Bay. The animal is a marine snail called Bullina lineata, also known as a bubble shell.

Here is the first half of the video.

The bubble shell, wandering, finds itself in a field of skeleton shrimp. These tiny beasts, not really shrimp but amphipods, have two large talon-like claws. The skeleton shrimp strike at the snail, which flinches and recoils. What looks like an especially vigorous stab, at the 14 second mark, elicits an especially strong response. The snail backs up, starts to feel for a way round the sea of claws.

An irresistable question, though a difficult one, is whether the snail feels these stabs and pinches, and experiences something like pain. The snail’s behaviors certainly look like consequences of a pain-like experience; the flinches are vividly recognizable. But what it might feel like, if anything, to be a bubble shell under assault by skeleton shrimp?

Over the last few years, a lot of thought has been put into questions about whether various arthropods – especially insects and crustaceans – might be able to feel pain, and whether they feel anything at all. Not as much work, even speculatively, has been done on gastropods, the group that includes the bubble shell.

Gastropods are molluscs, along with octopuses, who have been discussed a fair bit in this connection. But octopuses do not have typical molluscan nervous systems. Gastropods include Aplysia, a large slug-like creature (actually a snail with a small internal shell) that is an important “model organism” in neurobiology, with a much smaller nervous system than an octopus. A lot is known about learning in Aplysia, including some kinds of learning by reinforcement – learning by tracking the good and bad consequences of actions. That is intriguing, though what has been shown is a very simple version of that kind of learning.* Gastropods, like most animals, also have nociceptors, nerve cells that detect damaging stimuli as they occur. But the cautious view of many in this area (and just about everyone sensible is cautious) is that there can be nociception without experienced pain, as in some cases the nervous system circuits that make use of use nociception are simple and reflex-like.

Perhaps the person who has looked most closely at evidence for pain in gastropods, the author of some very interesting work I’ve been reading recently, is Edgar Walters. In this paper Walters discusses both arthropods and molluscs, and argues (with caution) that the evidence for something like pain in gastropod molluscs is fairly good. An aspect of the work I find especially interesting concerns some behaviors that are in a sense “in between” an immediate response to damage, like a flinch, and the long term consequences of those events, such as learning. In between these two is, among other things, “nociceptive sensitization,” in which an animal exposed to a particular damaging stimulus becomes more sensitive to stimuli of that kind, rather than dulled to it, for a period of time. Walters argues that in some animals – not all – this sort of response makes sense as it makes it more likely that the animal will be able to repair the damage, as it will protect the damaged part. Snails can repair and regenerate their bodies, though many animals cannot. As I read Walters (perhaps just a little between the lines), he thinks that for animals with these features, a felt dimension to biological responses to bodily damage does make sense.**

If so, it becomes likely that the Bubble Shell did feel the assault above.

Some more of Steve Winkworth’s video is below. Here we see just the skeleton shrimp, in a lot more detail.

I have written about those animals before on this site and taken a few dim shots of them, but nothing like what Steve, with superior skills, gear, and patience, has been able to achieve here.

Thanks to Steve Winkworth for permission to use his video. He has a long-running series of underwater videos on his YouTube channel.

* There is a small but interesting tradition of argument that holds that reinforcement learning might have special significance as evidence for pain in animals – this idea has been discussed by Colin Allen, Robert Elwood, and others. But the kind of reinforcement learning that has been seen in Aplysia is a very simple kind; I am not sure it’s even the right kind according to views like Allen’s.

** Walters, from that 2018 paper: “During evolution, physiological and molecular mechanisms driving nociceptive functions became linked not only to sensory and discriminative processes that elicit immediate defensive responses, but also to motivational and cognitive processes that enable an animal to avoid ongoing and future threats related to a noxious experience. This requires an ability to maintain functional “awareness” of injury-induced vulnerability until the vulnerability subsides (perhaps until adequate repair of damaged body parts has been achieved).”

Another philosopher, Eric Schwitzgebel at UC Riverside, has a paper in draft about consciousness in snails, using a land snail as the target case. The paper is here. Eric’s main theme is not snails per se, but the difficulties we face in making any headway at all on a question like “are snails conscious?” He thinks that when we try to answer this question using the theories of consciousness that now exist, our answers are “inevitably question-begging and rely partly on dubious extrapolation from the introspections and verbal reports of a single species.” At least in the long run, I am not so pessimistic. One option that Eric is much more skeptical about than I am – not so much a theory, but a feature of various theories – is that the presence of subjective experience (or “phenomenal consciousness”) in an animal is not a yes-or-no matter, but a matter of degree. I discussed this a bit in a talk at NYU given in 2017. Several people at that event thought that it is flat-out impossible that the presence of subjective experience is a matter of degree. This will be a theme in the book I am writing that follows up Other Minds.