With a hint of irony given the name, White’s seahorse, the most common species at my New South Wales dive sites, appears in many color forms. I’ve seen at least four colors that are markedly distinct – yellow, orange, pale grey, and dark brown – and at least some intermediates between these. I came across the pair below last week, and they nudged me into doing some reading. 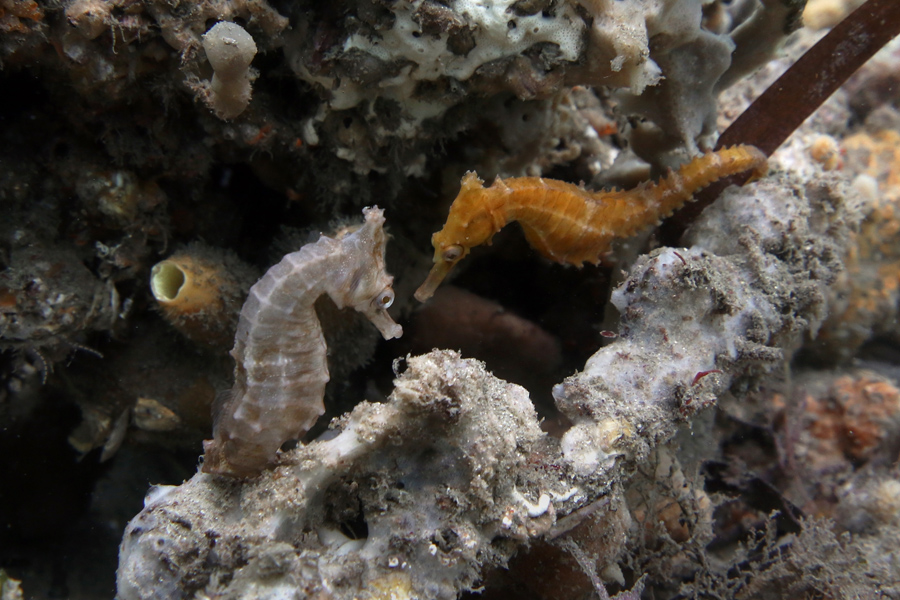 The reading yielded two immediate surprises. First, I had assumed that the color forms were either permanent or at least fairly stable, perhaps reflecting diet, sex, dominance, or something similar. And sometimes they are, but seahorses are said to also switch between some of these colors on quite a rapid timescale. The second surprise is that the scientific literature on the topic seems to be tiny. The most useful source I’ve come across so far is a couple of aquarium sites, Seahorse.com and WetWebMedia.

According to the Australian Museum site about White’s seahorse: “Seahorses in general are known for their ability to change colour depending upon their habitat, what they have eaten, and also as part of courtship and ‘greeting rituals’…. During the greeting ritual, White’s Seahorses change from their usual sombre colouration into far brighter shades of cream and yellow.”

As I came across the two just above, they approached each other in a courtly sort of way. One is yellow and one is grey. I watched them for a fair while – 30 minutes or so, moving between these and some other animals nearby – and their colors seemed stable as I watched. One of the other animals I was spending time with, 2- 3 meters away, was the first animal pictured above. He or she is yellow with no other close by, and I’ve seen solitary yellows often. Though I realize now that I’ve been paying nothing like the right level of attention to this question, my impression is that yellow may be a default color for at least some individuals, at least at the Nelson Bay site where these photos were taken. (All my instagram seahorses from this area are yellow, going back some years.) Around Sydney, they have been more muted.

Here is a second photo of the pale one of the pair just above…. 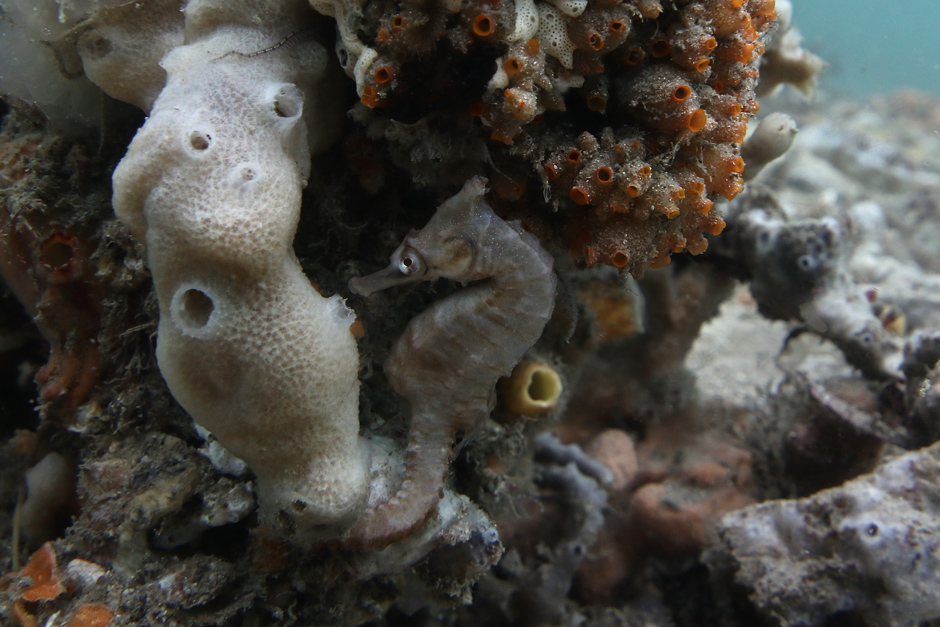 … and here is a photo taken a few weeks ago in a different part of the same site. This seemed to be another solitary individual. 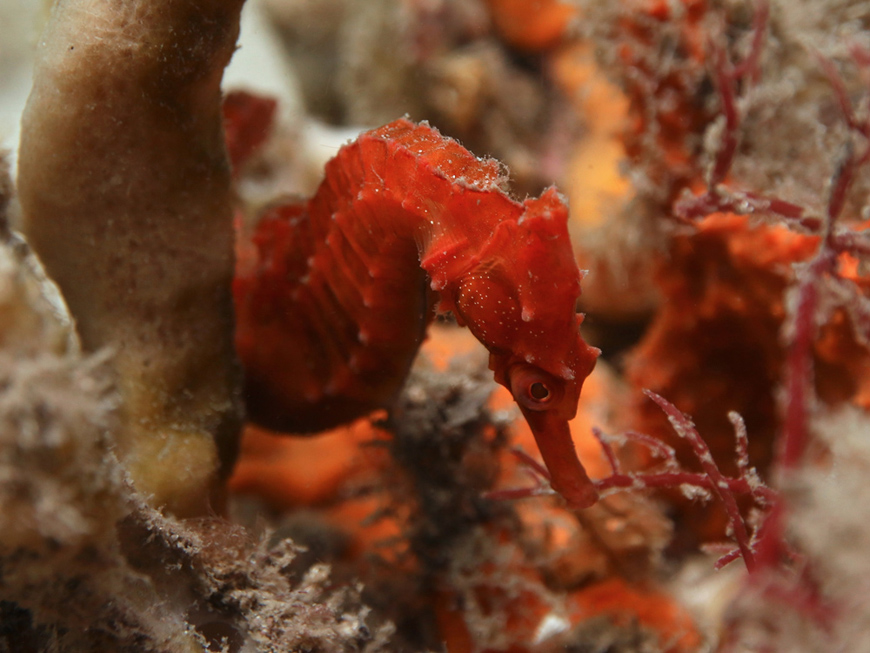 I am rather struck to find that another color-changing animal has been under my nose the whole time, one using similar mechanisms to those seen in cephalopods (chromatophores), so I will follow this up. One reason that the Nelson Bay sites are so good for seahorses, incidentally, may be the work that Dave Harasti and others have done in keeping an eye on their protection, and sometimes introducing artificial habitat for them – a series of “seahorse hotels,” not far from here. 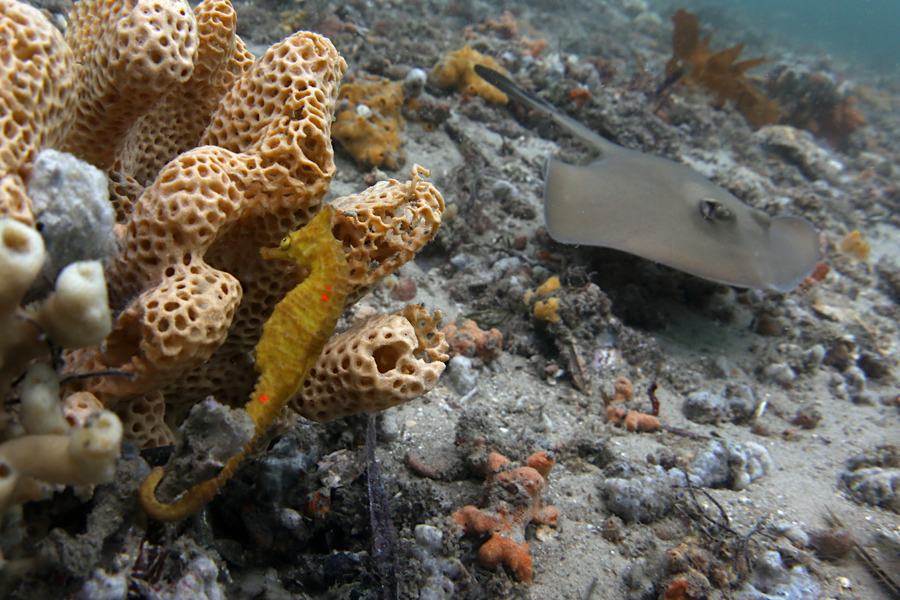 Natural history provides a distraction, but what we are all thinking about right now is the COVID-19 pandemic. Here I find myself in a slightly unorthodox place, at least in relation to the sorts of newspapers I read and the people I respect. I am enormously worried about the scope of the shutdowns that have been taking effect in many countries and cities this week. When I say this to people, some interpret it as my not being worried about the virus. Watching Europe, I am very worried about the virus, but I am every bit as worried about the economic devastation that is developing around us. A divide that is shaping up as a deep and salient one is that between people whose salaries (large or small) will continue to come in for months no matter what happens, and people whose income does not have that stability. I am on the easy side of this divide, as I am employed by a university. All the people I see in the media calling for ever-tighter restrictions on activity are also on the easy side. I know a lot of people on the other side, though, and many of them are suddenly now earning nothing.

I understand the rationale for the shutdowns, but the people calling for ever more of them rarely suggest plausible end-dates. And to someone in their position, the difference between one month and four months might not look especially stark – we just go for as long as necessary. (I heard a doctor on Australian radio yesterday say that there should be a shutdown of all non-essential activity until a vaccine is developed.) For other people, that weeks/months difference is stark. Once we get onto the longer horizons, we are talking not about economic inconvenience but a major public health problem in its own right, especially for families. How bad this gets will depend on the speed and generosity of welfare payments in different societies, but in many places, especially in the cities, plenty of people will end up broke and with nowhere to live. Broke people get sick; they get into trouble with the cops; they lose control of their kids. To me, this sort of outcome does trade off against the problem of the burden on hospitals.

At the very least, discussion of this issue should be explicit about the trade-offs. It should not cast hesitation about further shutdowns as prioritizing money over health, but as managing a difficult trade-off between different kinds of impact on health. Scott Morrison, the Australian Prime Minister, deserves credit for talking in a way that acknowledges this, and doing so in a way that corrects the health-over-money fallacy when it is expressed by others. (Morrison was hopeless during the fires, but he has done better on this issue.) I think that even people whose incomes and livelihoods have been suddenly shredded will be willing – heroically, in many cases – to hang on for several weeks to see if we can make a significant impact on the spread of the virus. But I don’t think their goodwill can be seen as indefinite, as lives start to crumble. The presentation of policies should recognize the difference between weeks and months, between an economic pause and a catastrophic depression. More generally, people seem to see it as callous to think about all this as a trade-off; I think it is callous not to think of it that way.

White’s seahorse was named after John White, the first Surgeon General of the colony of New South Wales. The raised structure on the top of a seahorse’s head, prominent in the case of this species, is called a “coronet.”

This entry was posted in Color, Communication, Vertebrates. Bookmark the permalink.