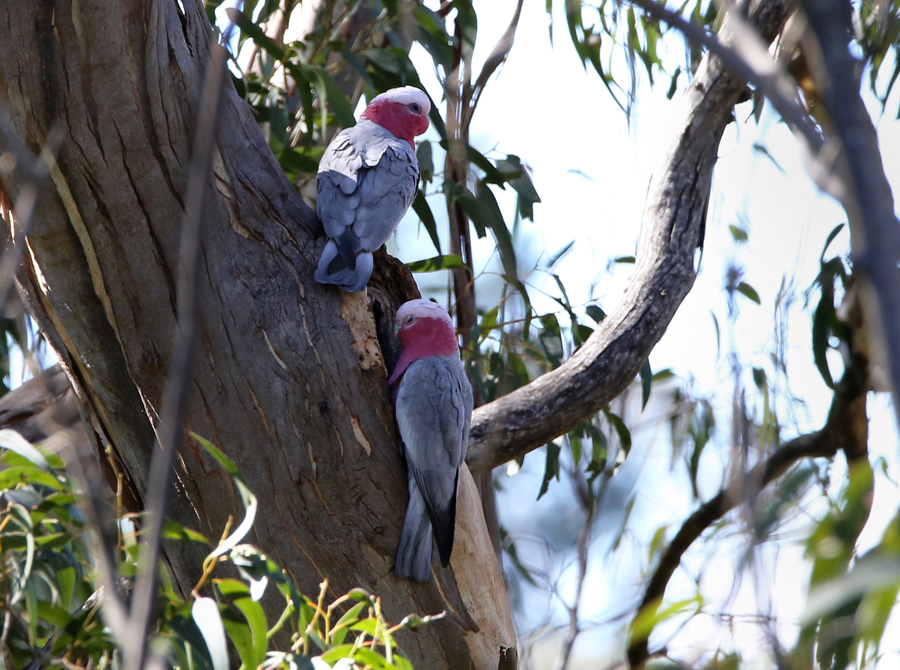 Continuing straight on from last time:

The next morning (day 5), the galahs were there. They had weathered the cockatoo storm.

A new question was posed by magpies. About four of them had gathered, and some of them came in to cause trouble. But the galahs fought them off with what seemed little effort – with nothing like the lengthy dogfights seen earlier. 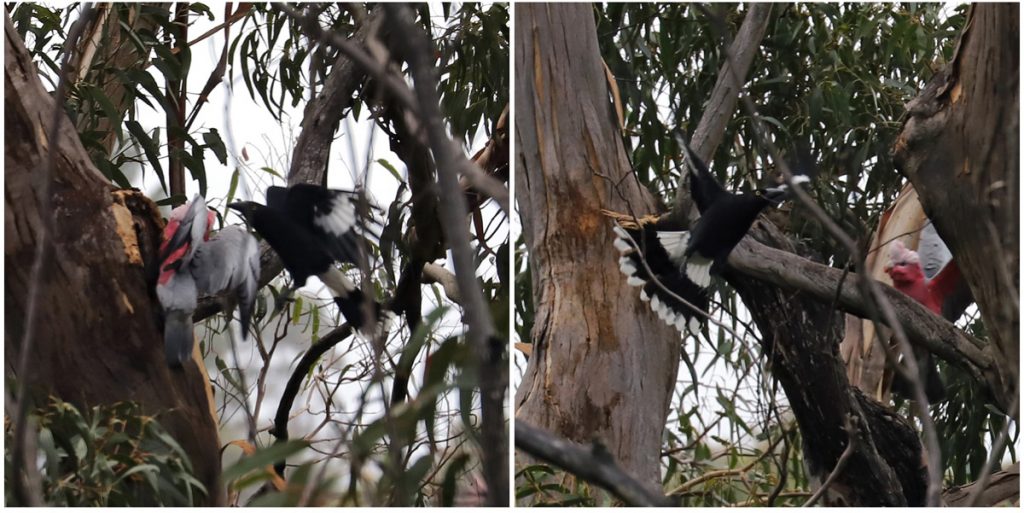 In the afternoon a squadron of cockatoos came in, and the galahs appeared to come straight out their nest in response to the calls, but no fights were necessary. My notes for day 6 are scrambled, but on day 7 the galahs were both there again in the morning. There were a few brief sightings the next few days, and then four days with no sign.

Watching out for them, especially during the days away, I began to get a further sense of the social and territorial intensity of avian life, at least in this setting. Every afternoon around 4 or 5 pm, a flight of up to a dozen sulphur-crested cockatoos would sweep in from the south, heading for a particular area perhaps a kilometer away, across a deep gully, with some large dead trees. I think this is a regular night roosting site for them – cockatoos often roost in flocks, though their nests, when raising eggs, are not communal.

Their path takes them past the galah nest tree, though not close to it. As they sweep through each day, a couple of them often zoom up toward the area of the nest. They land and occupy the same couple of trees, and hang around for half an hour or so. They make the usual cacophonous cockatoo noises through this, and also, it seems to me, make something like “contact calls”: short exclamations in pairs, apparently a call-and-response, staying in touch. I have a strong impression that the cockatoos are trying to surveil and maintain a general control of the area, at least with respect to other parrots. If so, it is an attempt to control territory quite some distance from where they rest – about a kilometer – and it is pretty clear that the nest site the galahs are trying to hold is not one the cockatoos have much interest in using. The opening in the tree looks too small for the larger birds. The fights described in the previous post would appear to result, then, from attempts by the cockatoos to dominate this general region, even parts of it they are not using. They seem to just want the galahs out.* 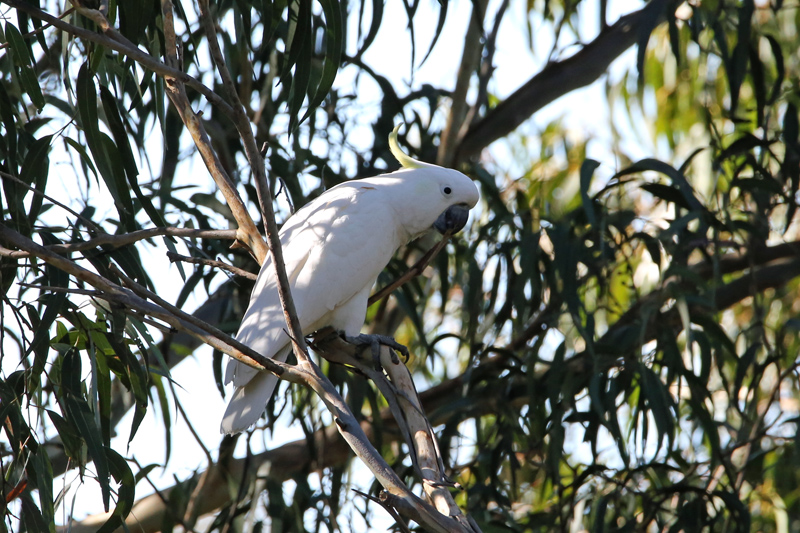 Four days passed with no sightings of galahs, and regular surveillance by the cockatoos. I began to suspect that the galahs had decided that their position was not tenable – smaller birds, thoroughly outnumbered, with their nest under regular scrutiny by birds who seemed not to want to do anything with it, but would not tolerate their presence. Every time I’d seen a clash between cockatoos and galahs, the cockatoos had backed down, but they kept returning. I acquired quite a jaundiced view of the species, scowling when I came across them even many miles away.

Then, on day 14, I checked the site in the morning and there the two galahs were, just as before, looking chubby and satisfied, messing about beside the nest. In branches above them, a few honey-eaters squabbled, flying at each other and jostling. The galahs paid no mind. 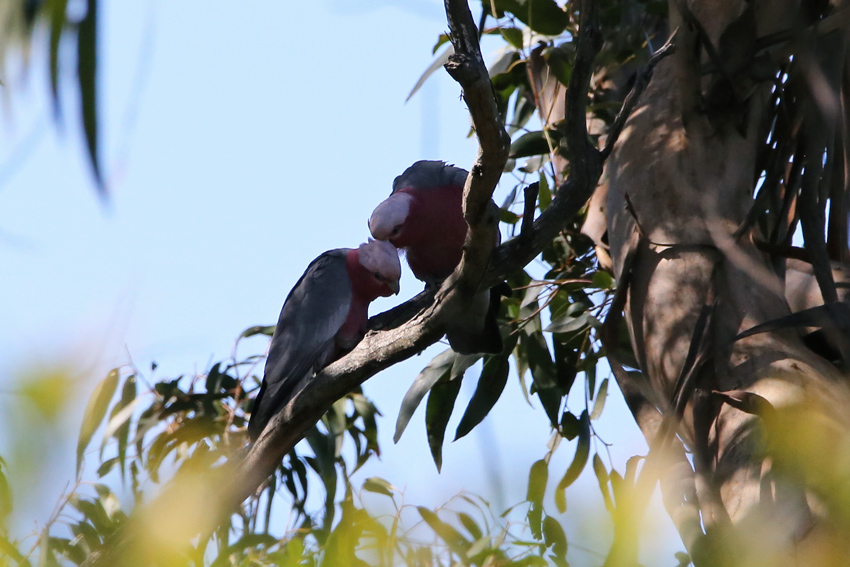 I took a few photos and then stepped back, thought about getting something to put my tripod on, and then looked up and saw the two galahs flying straight at me like arrows. As they flew, they made quiet “cheep” noises. Both of them swooped up effortlessly over my head, and away over the roof of the house. 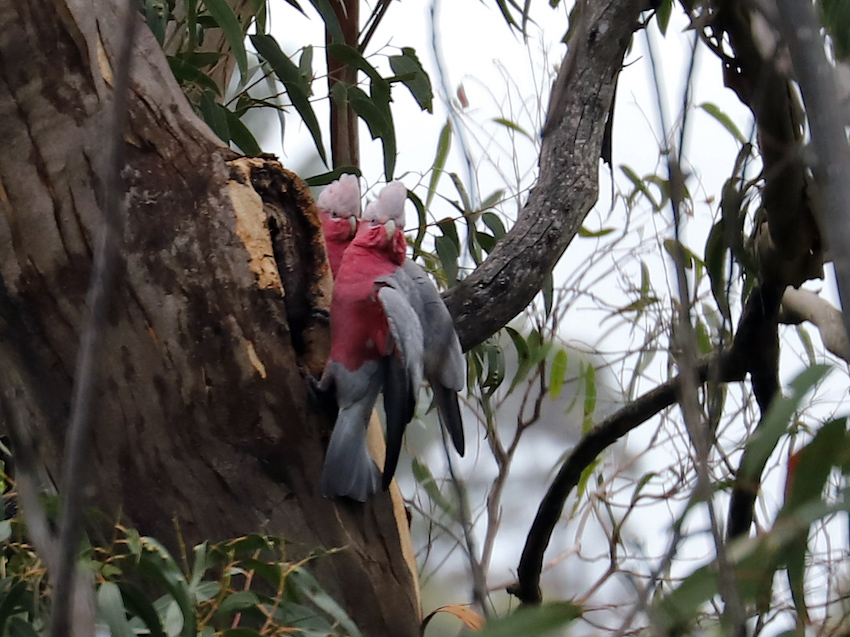 *  The cockatoo photo is from some days later. But this is a photo of one of the apparent surveillance incidents. I’ve not yet managed a photo of those group fly-bys.

This entry was posted in Birds and tagged galah, parrot. Bookmark the permalink.