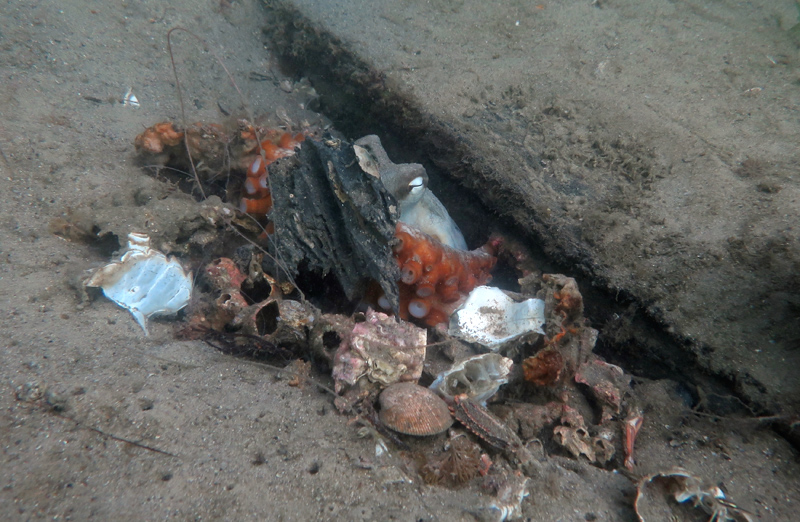 What do we have here? Various bits of body – some lobster, I think, on the left; a clam shell; a bit of crab claw and crab carapace. Arrayed in the front are what look like the remains of barnacles (not usually octopus food), some fishing line, scraps of algae. And in the middle above the barnacles, held there by the octopus, a black object that looks like an old bit of wood.

The octopus was at Chowder Bay, a great place for collecting, if you are an octopus. I’ve been reminded of dens like this during some discussions of octopus behavior that came out of the recent paper about our “Octlantis” site. At least much of what we’re seeing at a den is a fortuitous result of the octopus’ eating habits. They collect food, bring it home to eat, and leave the remains lying around. But they often then arrange and rearrange the debris around their dens, and often also collect and arrange objects that are implausible options as food. To what extent is the creation and maintenance of dens like this a deliberate, intentional act by an octopus? What, if anything, are they trying to do?

We’ve just published another paper that explores these questions – it’s an invited “Addendum” to the previous paper, in a journal called Communicative and Integrative Biology.* Marty Hing and I also recently  wrote a more popular piece along similar lines for The Conversation. Some difficult questions have been unearthed by all this, including some that we wrestled with in emails but could not cover in the articles. I’ll follow them up in a couple of posts here. 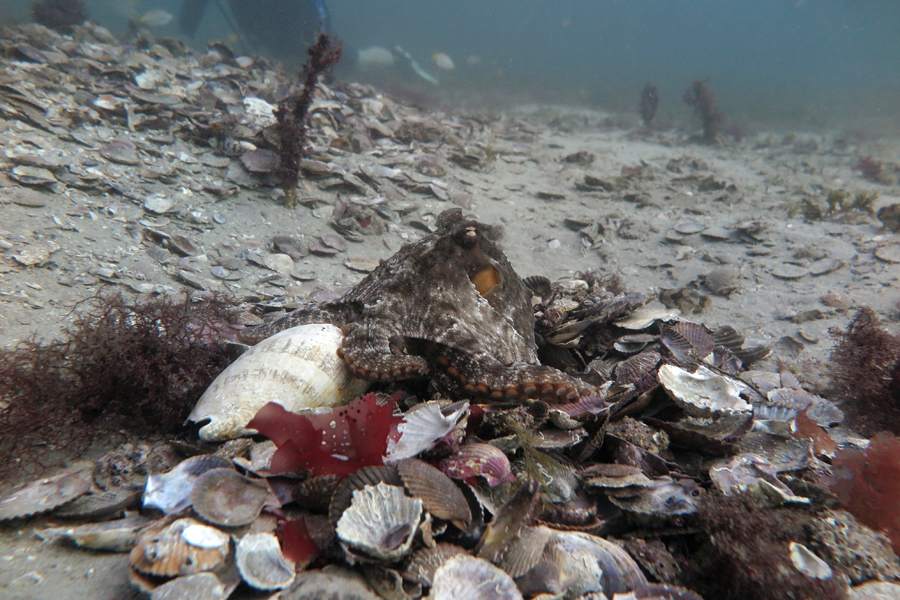 One important concept in this area is that of an intentional action. A lot of the questions surrounding these behaviors can be expressed by asking: which features of octopus dens, and the high-density sites that have many dens, are produced intentionally, and which are accidental or fortuitous?

Several different senses of “intentional” are relevant. In one usage, the term is roughly synonymous with “purposeful” or “on purpose.” In a second sense, “intentional” actions are those that result from an animal’s beliefs and desires.** (A third sense, not so obviously relevant, is seen in recent discussion of a particular kind of communication, called “intentional” communication. In this kind of communication, seen certainly in humans and apparently in some other animals, a speaker or signaler tries to get something across, rather than just producing a signal automatically.)

What I am after is mostly a contrast between intended and inadventent effects – intended effects are achieved “on purpose.” That is the first sense above. You might think the first two senses are very close – isn’t a purposeful action one that reflects an animal’s wants and desires? Perhaps not. There can be purposes present in the actions of an animal, or other organism, that are not appreciated by the organism and not psychologically registered by it. There is a sort of purpose seen in the way some plants track the sun, also in the way you blink when something gets close to your eye, and the mechanisms that make these things happen apparently don’t involve beliefs.

There is a lot about this in Dan Dennett‘s new book From Bacteria to Bach and Back. He refers to the purposes of behaviors that are unappreciated by the animals themselves as “free-floating rationales.” I’ve never liked this phrase, as it suggests a behavior that simply “makes sense” for an animal, whether or not the behavior is produced because it makes sense. An octopus might bring scallops home to eat, and the shells might then make it easier to maintain a den, but the bringing-home behavior might be done purely because eating is safer at home, so the consequences for den-building are fortuitous byproducts. I think that Dennett does not mean his free-floating rationales to float as freely as this, but his term does suggest it. Here is how I would set things up. 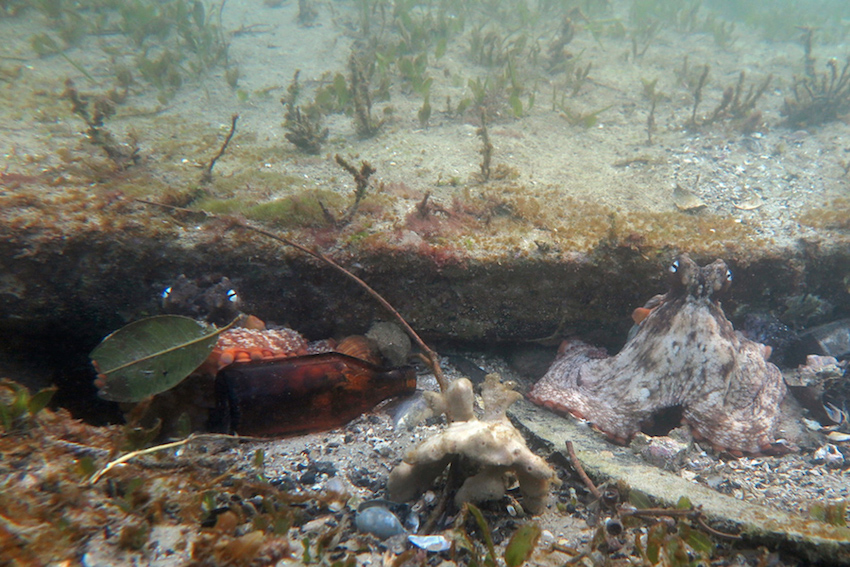 The behaviors of animals and other organisms arise through many different internal mechanisms, and these behaviors can be shaped by feedback of various kinds. In different ways, there are effects of a behavior that have consequences for the future production of that behavior, or its ongoing course. A behavior’s effects may lead to the behavior ceasing, continuing, changing, or being repeated. In some cases this feedback work via evolution itself. A particular behavior may lead to the animal surviving and reproducing, or not. When behavioral tendencies are inherited, some may be retained over generations due to their consequences, while others are lost. There is no need for intention in those cases, but there is a feedback-relevant effect of the behavior. In the positive cases, where the feedback makes the behavior more likely to be produced, this is something like a goal.

In other cases a behavior occurs, has effects, and the effects have consequences bearing on that behavior that go via the animal’s own senses,  nervous system, and decisions. In some cases this might be simple in ways that resemble the operation of a guided missile – there is a control system that tracks whether the animal is taking a certain course, and makes small adjustments in response. In more complicated case, the animal is responsive to the effects of its actions in a richer way – if one action fails to have a particular effect, as registered by the animal, another action is tried. And when a specific outcome is registered, the attempts and modifications cease. In the most complicated cases of all, the animal has an intention in mind – I want to get to the gym – and moment-to-moment decisions are taken that make that outcome as likely as possible.

Something in common across all these cases is sensitivity to feedback, and that is what produces a kind of targeting of a behavior on a particular outcome, whether this is an intended outcome or one that figures in feedback of another kind. There are two extreme cases or poles – one where an outcome is held consciously in mind, and one where only a long causal chain that extends over generations aligns a behavior with a goal. Between those poles are a lot of partial cases, including, most likely, the behaviors of our octopuses, and I’ll grapple with those in detail another time.

The last shot here is a Bullina lineata, a “bubble shell” at Nelson Bay. Appropriately, they seem to become common right around Christmas. 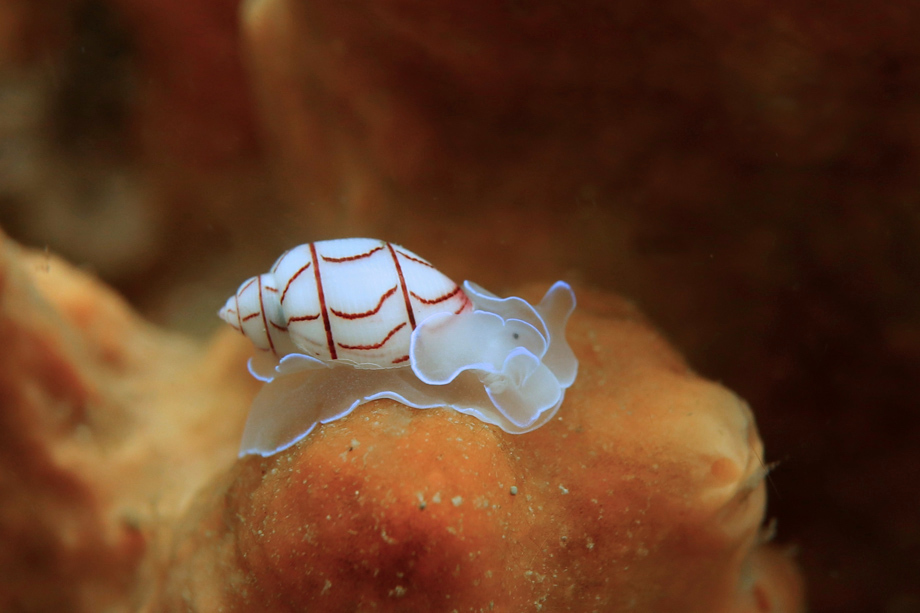 ** Here are two papers that are useful on this topic, that I’ll say something about in a later post: Heyes and Dickinson 1990, Allen and Bekoff 1995.

The third photo is a repeat, from a post set in Sydney Harbor called ‘Night and Day.’

This entry was posted in Bodies and Minds, Cephalopods, Octopus. Bookmark the permalink.