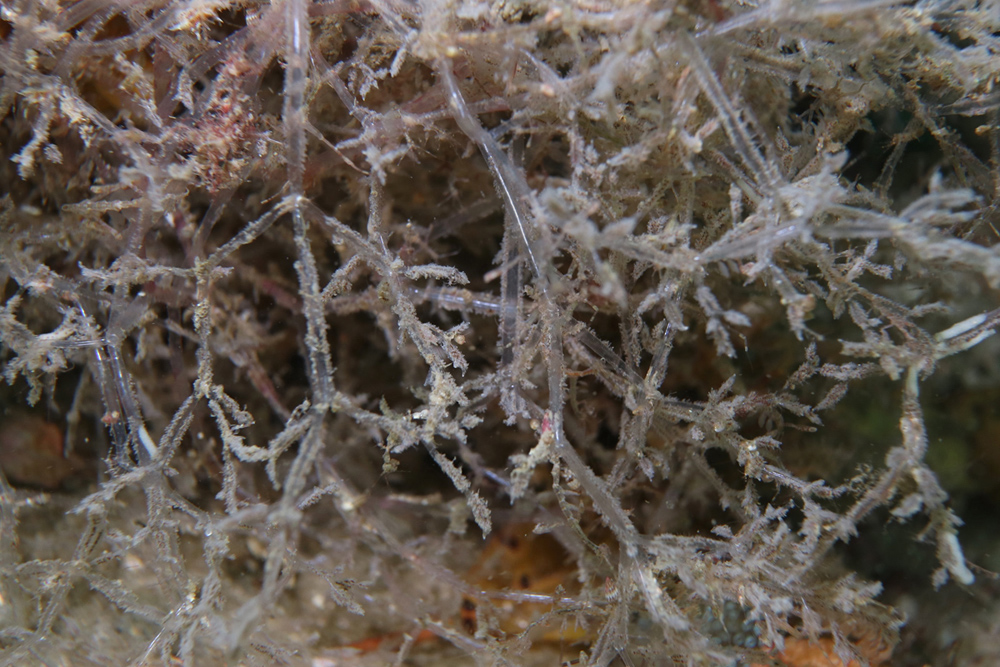 A few years ago I headed a post with a photo by David Liittschwager, showing all the life teeming in a tiny scoop of sea water. I was reminded of the shot during some time spent recently with the object above, which is a bryozoan colony. I looked at it initially because Tom Davis, a biologist who was showing me around part of the Fly Point dive site in Nelson Bay, picked it out to me. On its stems were tiny sea slugs, each no more than a couple of millimeters long. (Tom has evidently had microscopes implanted in his eyes.) I took some photos.

Bryozoans are animals I’ve not written about before. They are from the “bilaterian” part of the tree of animal life – their bodies have left-right symmetry, as we do. (They are “lophotrochozoans,” not far from molluscs and annelid worms.) But bryozoans turned away from the evolutionary paths usually associated with animals of that kind, and began to live more like plants. It’s tempting to say they went back to living like plants, but plants themselves, of the familiar kind, are not especially old organisms and are not in any bryozoan’s history. Lots of living things have discovered, in evolution, a tree-like branching shape, including corals and various seaweeds. But bryozoans are quite a long way away, evolutionarily speaking, from other organisms with that sort of design, and they made the plant-like turn in a very concerted manner; many of them look just like underwater bushes or mosses. Almost all live in colonies – above, you’re looking at a very large number of these animals, not at one.

Later, on the computer, I located the tiny nudibranchs. Here is one. It is Okenia harastii, named after Dave Harasti, another Nelson Bay biologist and diver. 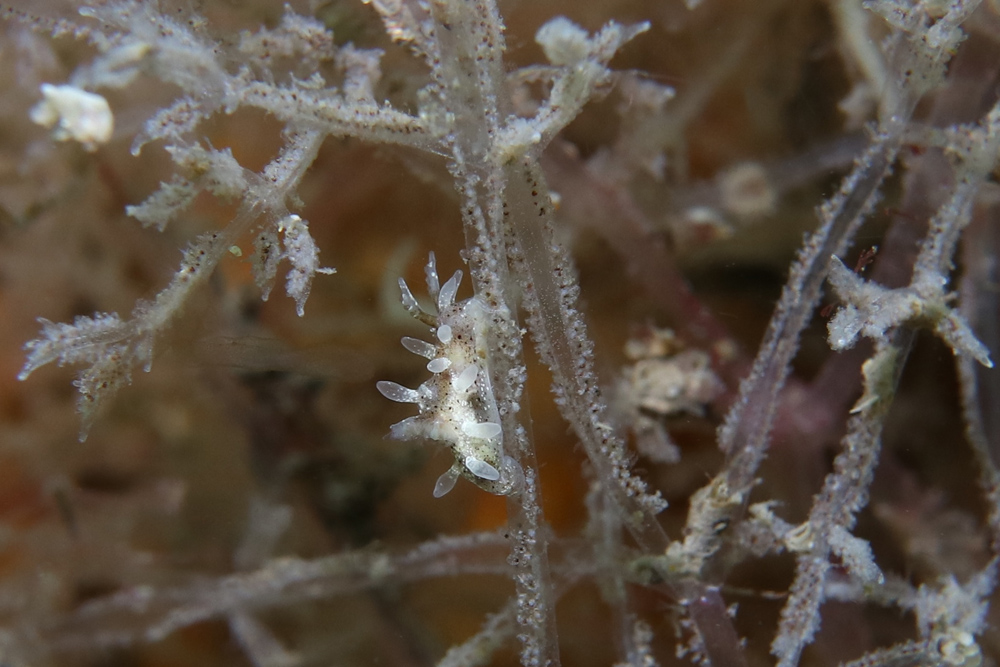 (You can’t find this Okenia in the shot at the top; that is just a shot of the Jackson-Pollock-like bryozoic mass.)

I looked through the branches of the bryozoan, reflecting on how bush-like it was. Then I saw a tiny stripe of of red. I zoomed in further, and realized the stripe was on a talon-like claw. The claw was attached to what initially looked like another stem of the bush, but that “stem” was attached to another one with a conspicuous hinge. I was not looking at more of the bryozoan colony, but at an arthropod called a skeleton shrimp. 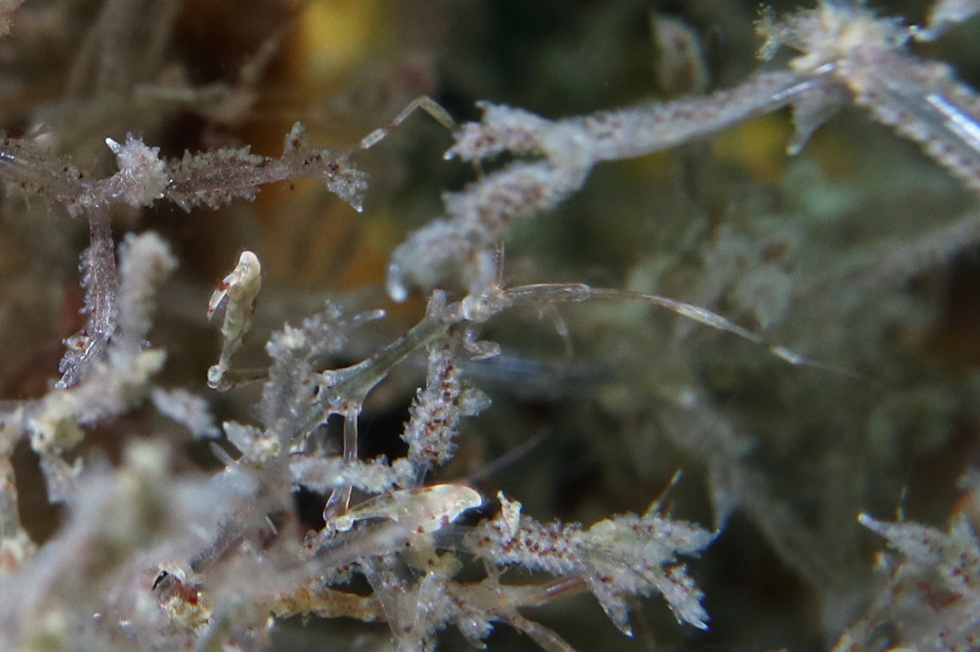 That is not a very good photo, but I had no idea the animal was there.

Soon we found another of these, and a third:* 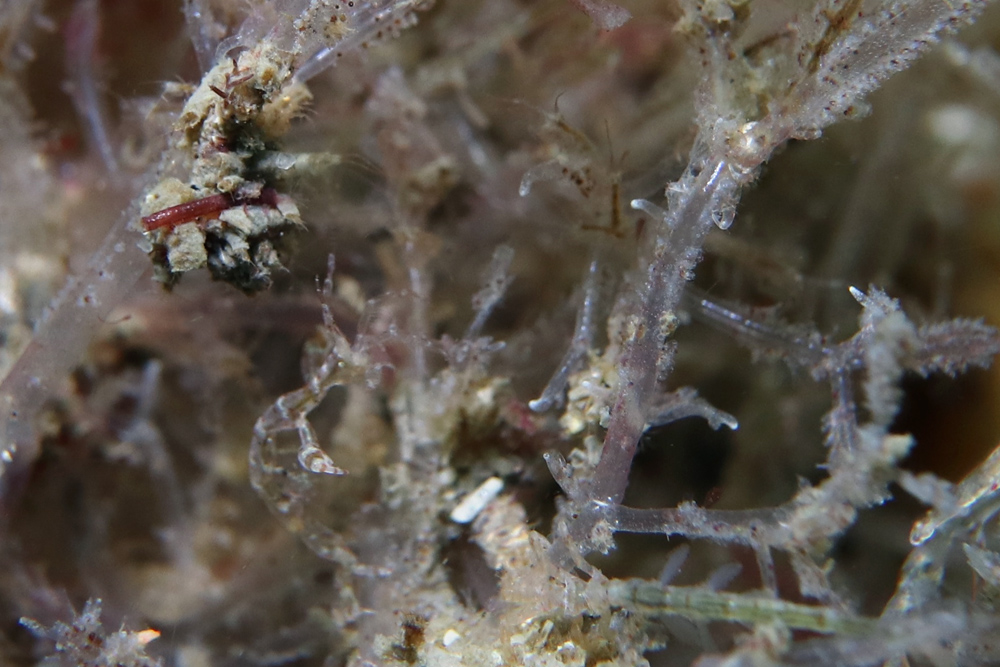 Skeleton shrimp are not really shrimp, but a kind of amphipod, with two sets of those talon-like claws. Flipping through the photos showed that they are in constant motion.

Below is a zoomed-out shot that shows the location of three we found. The larger one (third photo above) is at the lower right and the smaller one (photo just above) is near the center. (A higher-res version of the photo below is here.) I am going to go back to the site and (somehow) get a skeleton shrimp portrait. 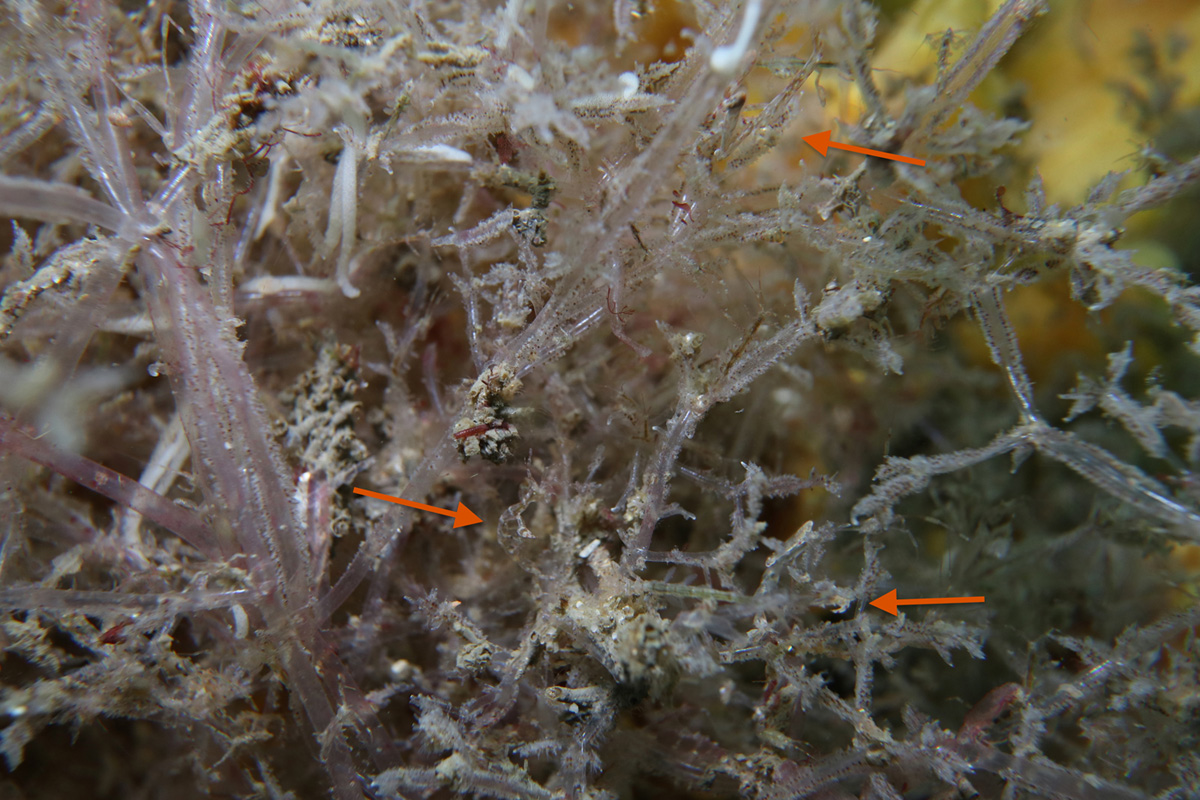 * My wife found two of these, as she worked out that flipping through the photos revealed them, given that they were the only things that moved across flips.

This is a good site about the bryozoan, which is probably Zoobotryon verticillatum.

David Liittschwager also did the photos for Olivia Judson’s octopus feature in National Geographic a little while back. There are a lot of good wildlife photographers, but I think Liittschwager’s work is special. Thanks again to him for permission to use his seawater photo on my site.