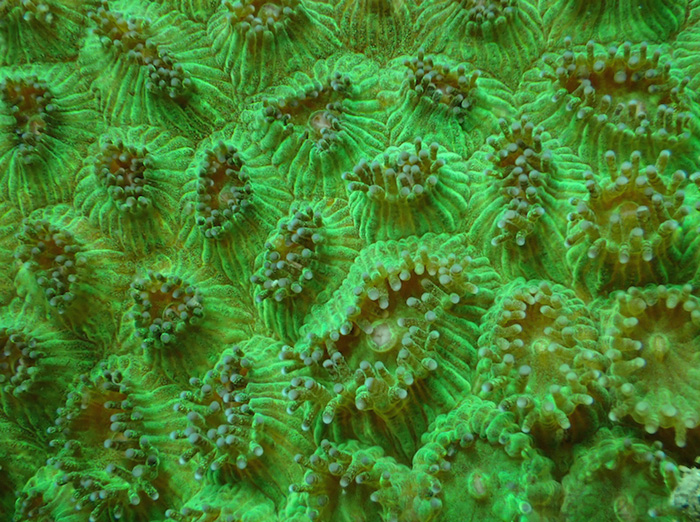 It’s a zoanthid colony – volcanos fringed with fingers. The photo is lit and magnified but the green is real (a shot of the colony from further away is here). Zoanthids are a kind of coral, so they are Cnidarians, along with jellyfish and anemones.

This post continues directly from the previous one, which was about a possible revision to our picture of the early history of animals. The revision being debated is about the sequence of early evolutionary branchings in this part of the tree of life. It used to be thought that sponges are the sister group to all other animals. That is: it was thought there is an early evolutionary branching that leads on one side to sponges and on the other to all other animals. This might well still be true, but it is presently suspected that ctenophores, comb jellies, might have branched off before sponges: ctenophores, then, are the sisters to all other animals. Here is a sketch of the animal part of the tree of life under that hypothesis: 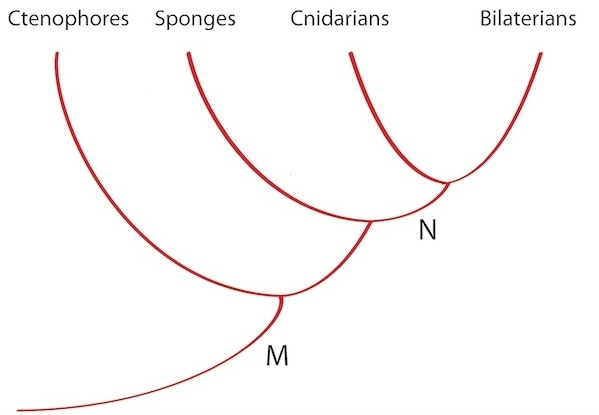 We should not imagine something sponge-like. For a start, sponges have been pushed further in. But we probably shouldn’t imagine something ctenophore-like, either. It needn’t have looked like any of our distant cousins. It lived a life of its own, and when there was a branching, one side gave rise to ctenophores and the other gave rise to very different animals, including sponges and many others – cnidarians like the zoanthids, bilaterians (bilaterally symmetrical animals) like us.* 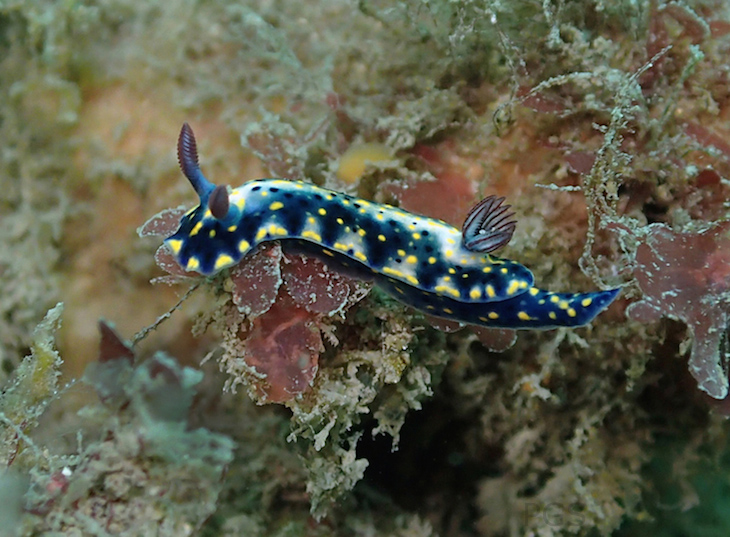 Let’s return to the Nielsen picture as a way of organizing things. In his view, the road to a body that is organized for an active life in the water column, with neurons and a digestive cavity, goes via the life of a sponge, with a tiny swimming larva and an adult fixed in place. When I imagined the Nielsen model being grafted onto the new tree, in the previous post, this was imagining that the ctenophores branched off somewhere round stage C below. 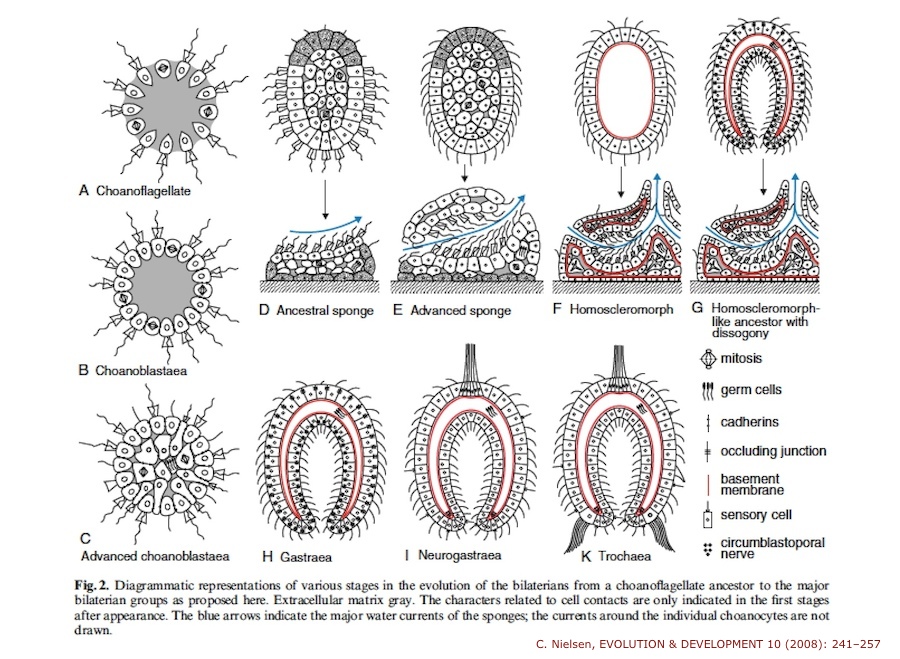 But if ctenophores did branch before sponges, it’s at least the case that the road to these traits – nervous system, digestive cavity – need not go through a sponge-like form. Suppose, then, that there’s a shorter path from the first forms of multicellularity to something like Nielsen’s stage H, the Gastraea (roughly as Ernst Haeckel imagined, well over a century ago). This animal can swim, can sense its environment, but has no nervous system. From a form like this, the ctenophores branch off and evolve their nervous systems. The next branching on the non-ctenophore arm is the one that leads on one side to sponges and on the other to animals with nervous systems.‡ Neurons eventually evolve (for the second time) somewhere round N on the figure above. If we look at N on the chart, what might this animal have been like? So far, we’ve established just that it’s something that led on one side to cnidarians and on the other to bilaterians. 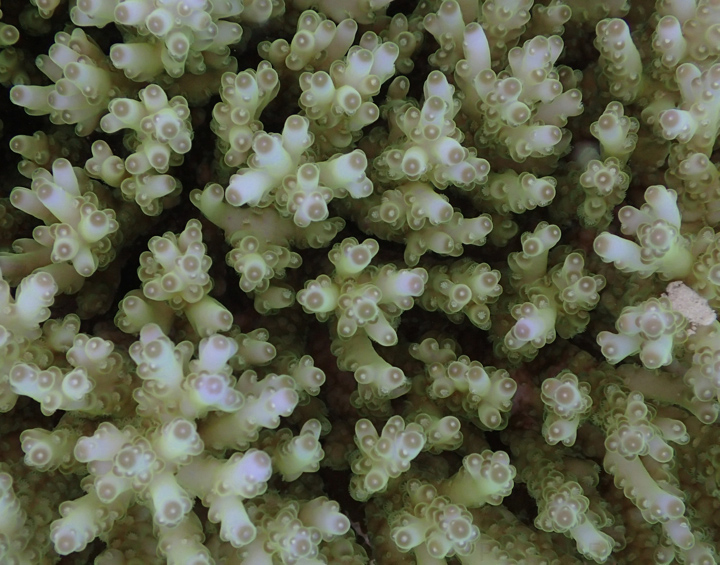 Fittingly for the next-to-evolve cnidarians, I’m writing this post from Rakiraki, Fiji, home of the best coral I can remember seeing – perhaps since my first trip to the Barrier Reef nearly 30 years ago, perhaps ever (though the zoanthid photo was taken in Sydney Harbour).† It’s good to think that despite the undeniable decline of the Barrier Reef, coral gardens like this still exist. On the other hand, Fijian waters are fished heavily, and as a result you’d see more large fish in any of the Sydney area dive sites I write about than here. The consequences for the Barrier Reef of pollution and agricultural runoff – the easily preventable ills – and the larger challenge of global warming are vivid when you’re reminded, in these beautiful Fijian waters, of how the Australian coral used to be. The consequences of overfishing are apparent, too.

‡ Another option, mentioned in the previous post, is that nervous systems evolved in the Gastraea form and were lost on the sponge lineage, but I will set that one aside for now.

All the photos in this post were taken with an Olympus TG3 or TG4. These are amazing – as well as inexpensive – cameras. They can ‘focus-stack’ a subject a few centimeters way, 10 meters underwater with no housing. They also have infuriating controls and an excellent lens. Canon, you’re asleep!

This entry was posted in Cnidarians, Nervous Systems, Tree of Life and tagged bilaterian, Cambrian, Ediacaran, evolution of nervous system. Bookmark the permalink.

One Response to 22. Hypotheses about the Metazoa – 2