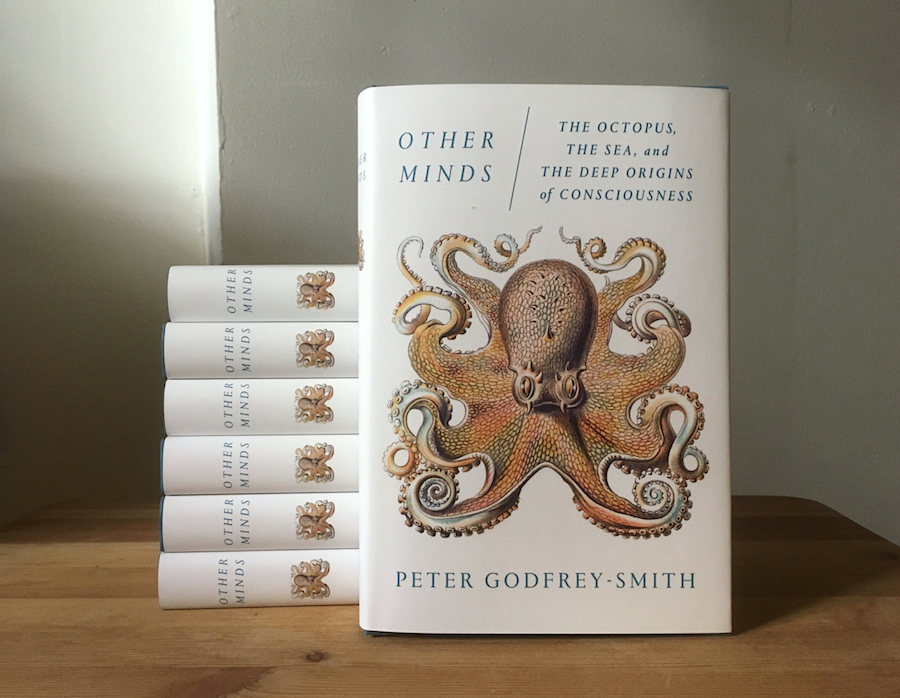 The book Other Minds was released today, after several years of thinking, diving, and writing, and then the best part of another year watching the book make its way through the press. The publisher is Farrar, Straus and Giroux in the US (Harper-Collins in the UK). The cover, designed by Rodrigo Corral, uses an octopus illustration by Ernst Haeckel.

This is the book that Metazoan.net was intended to incubate. Over the next few months I’ll use this site to post a number of photos that didn’t make it into the final version. The image below is one of those. It was taken at Whyalla, South Australia, several years ago now, during a day when the colors of the Giant Cuttlefish seemed especially radiant and celebratory. 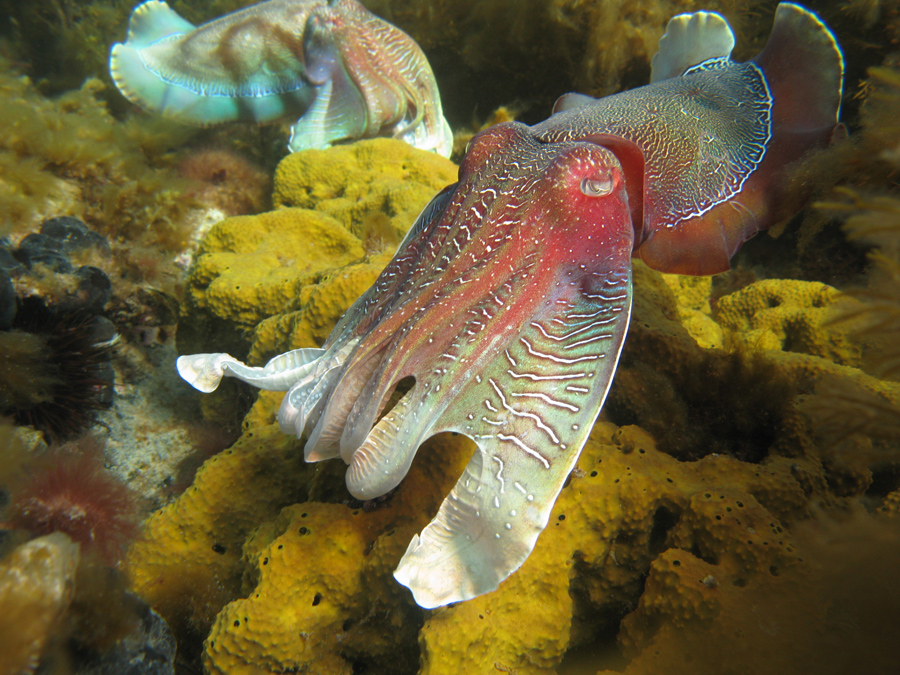 I’ll also extend some themes that were left hanging, reply to any critics, and keep track of updates in the world of other minds. A few nights ago I read a particularly good article in National Geographic about eye evolution, written by Ed Yong. It focused on the work of Dan-Eric Nilsson who has, among other things, studied the tiny and disconcerting ‘camera eyes’ of the box jellyfish. The article includes  graphics that try to recreate the view of the world that would come from eyes of various different kinds. Box jellyfish look up, to make sure they are in their mangrove home, rather than drifting out to sea. As Nat. Geo. has used some of my videos, I’ll assume some reciprocation is OK and reproduce one of the images from their article here. Left shows the mangroves as we’d see them, looking up from the water. On the right is a jellyfish-eye view: 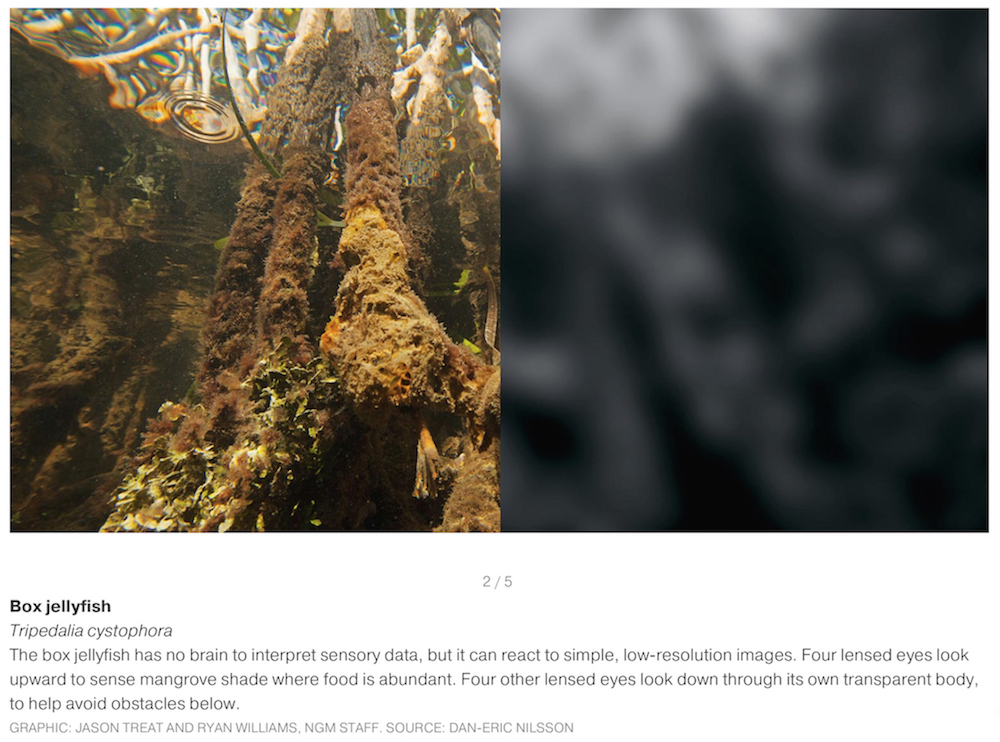 This article is illustrated by David Liittschwager. Liittschwager is a superlative photographer; I wrote a bit about him last year, here, after he gave me permission to use one of his photographs in a post about the history of animal life. His photos always have a living, lyrical quality, along with their meticulous treatment of biological detail. Liittschwager also did the illustrations for Olivia Judson’s recent octopus article in National Geographic.  In philosophy and in the broader culture, there’s increasing interest in animal minds. And as we continue to watch cephalopods, they continue to watch us: 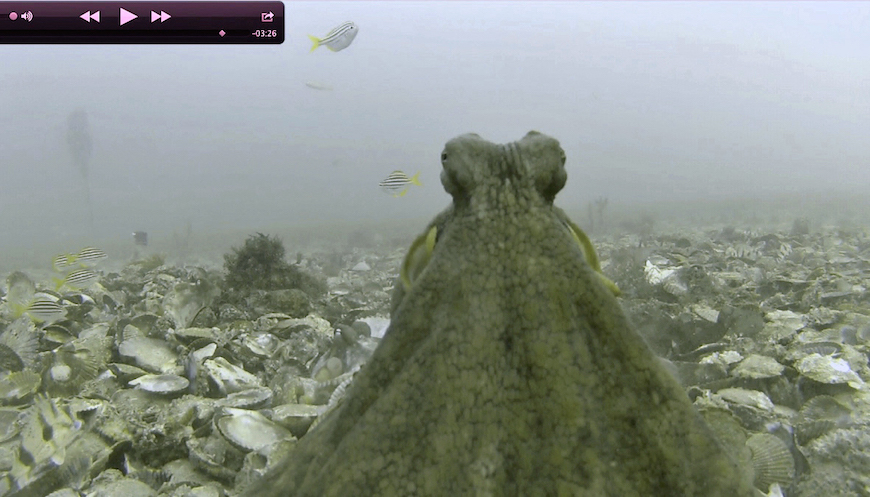 Notes: A page collecting reviews of Other Minds is here. The New York Times just published an excerpt from the book here. The octopus image above (in which an octopus inspects an unmanned camera) derives from a collaboration with David Scheel, Matt Lawrence, and Stefan Linquist. National Geographic have just released a compilation of their best images for 2016. Amazing shots, including one of Liittschwager’s octopuses.

This entry was posted in Bodies and Minds, Cephalopods, Octopus, Tree of Life. Bookmark the permalink.

One Response to 45. Other Minds Are Here