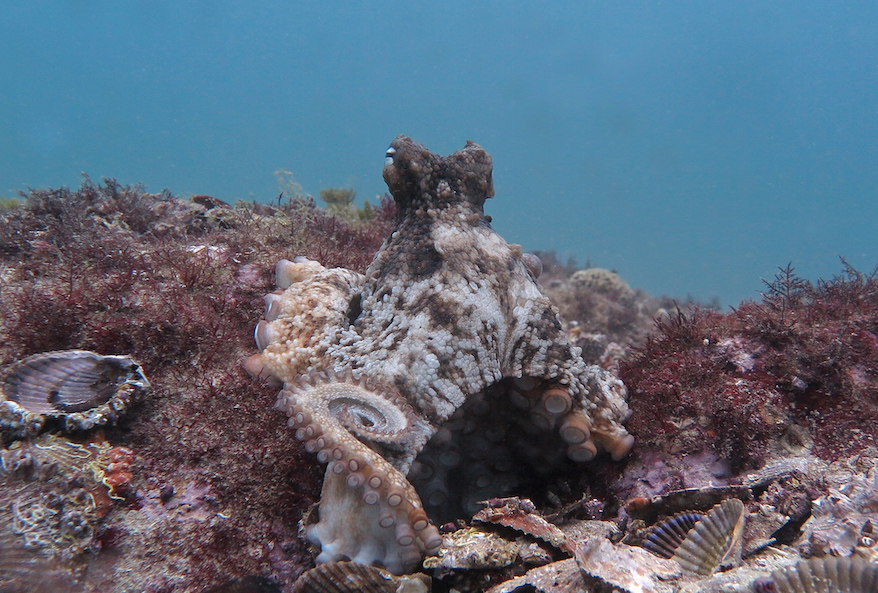 This has been a big month for cephalopod genetics, due to a paper in the journal Cell by Noa Liscovitch-Brauer and co-authors, reporting that octopuses and other “coleoid” cephalopods (cuttlefish, squid) engage in some unusual “editing” of the RNA in their cells. [1]

The usual rough picture is that DNA is “transcribed” to make RNA and then the sequence of units (nucleotides) in the RNA specifies the sequence of units (amino acids) in a protein. But the RNA in many organisms is “edited” – modified – before the protein-making stage. It’s often not clear what consequences this has. The Cell paper found that in coleoid cephalopods – the ‘smart’ cephalopods that do not include nautiluses – there is a lot of editing, it does affect the proteins produced, and it especially affects proteins used in the nervous system.

The Cell authors say, with caution, that they suspect this has some link to the behavioral complexity of cephalopods:

The association of massive recoding with the nervous system, and the fact that it is unique to the coleoids and not observed in nautilus, hint at its relationship with the exceptional behavioral sophistication of the coleiods. This idea is reinforced by the high density of editing in transcripts that encode proteins directly involved in excitability [of cells in the brain].

A number of newspaper amd magazines picked up the story (New York Times, Atlantic, Discovery, The Conversation), and all of them made much more of the possible link to intelligence. The NYT‘s title was: “A Genetic Oddity May Give Octopuses and Squids Their Smarts.” 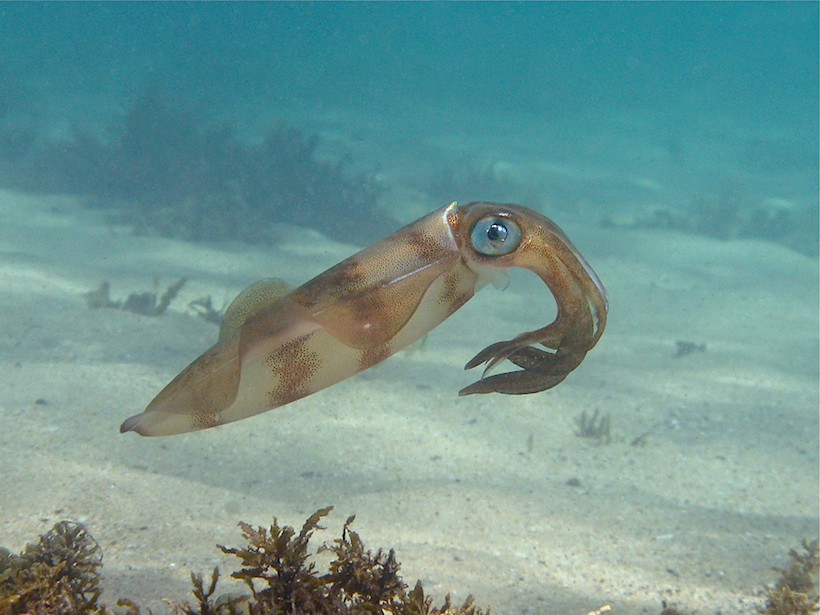 Editing one’s own RNA sounds clever and flexible. But if it makes a difference, how would it do so? What would be the pathway from RNA modification to intelligence and complex behavior? How could it “give octopuses and squids their smarts”? (NYT). The articles give very quick sketches of how it might work. I’ll take a closer look.

What does RNA editing do, in the first instance? It changes the template from which a protein will be made; what is produced is not what inspection of the “raw” DNA and RNA would have predicted. So far, all we have here is a different protein, not a more complicated or clever one. Why should the way a protein is made make a difference? 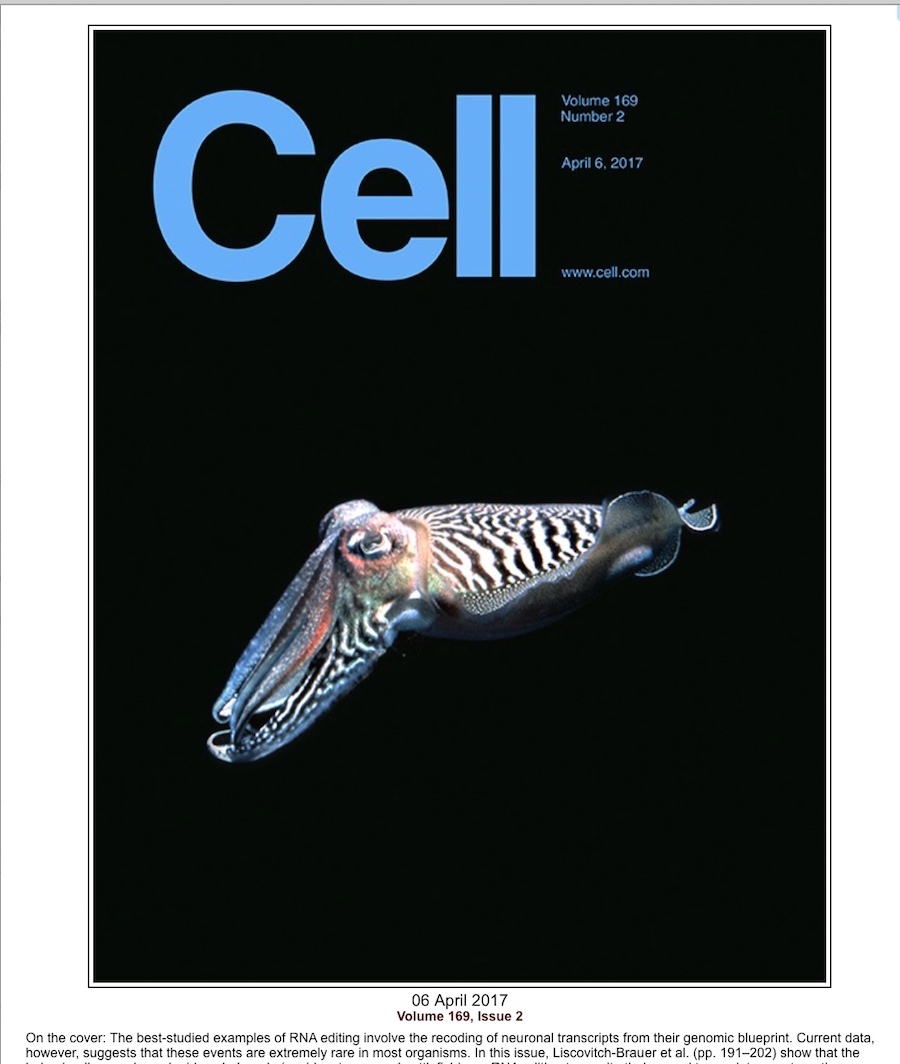 There are two ways things might work, and both might be operating at once. First, if only some of the RNAs coming from a given gene are edited in an individual, then a more diverse set of proteins is produced. The result is a more complex array of ingredients, which might give rise to a more complex machine. The presence of a more diverse molecular “kit” can indeed be relevant to the complexity of neural activity.

These sound initially similar – and, again, they might both be going on at once – but they are different in principle, and differ in how they relate to questions about complexity and smartness.

In the first mechanism (which I’ll call option A), there is more diverse stuff being made. In the second (option B), different stuff is made on different occasions. In case B, it might not be the case that lots of products are present in any one situation, but there is a matching of product to circumstances. In case A, it’s not necessarily the case that different products are made in different contexts. Diversification of products is not the same as plasticity. You can non-plastically make diverse products (just produce a lot of different stuff, all the time), or you can fine-tune your activity to circumstances, but always produce something simple in each case.

The wording of the Cell paper moves between language apt for each of these possibilities. Their title is: “Trade-off between Transcriptome Plasticity and Genome Evolution in Cephalopods.” That looks like option B. However, the paper does not show that there is plasticity in this sense; that would be an extra inference. A figure in their “graphical abstract” also talks about plasticity:

The text of the abstract, on the other hand, talks just about “diversification.”

What about the evidence in the paper? It bears more directly on diversity. They say that in a number of cases, both edited and unedited versions of a protein were found (though really these would have to be from a single individual, and I don’t know if their data has that form). In other cases, only the edited version of the protein was found. There is evidence from other work on RNA editing in cephalopods that shows plasticity, though. An earlier study involving one of the same authors (a pretty remarkable paper) found that octopuses in cold as opposed to warm water produced different proteins by means of editing. Editing might be involved in both plasticity and diversification. 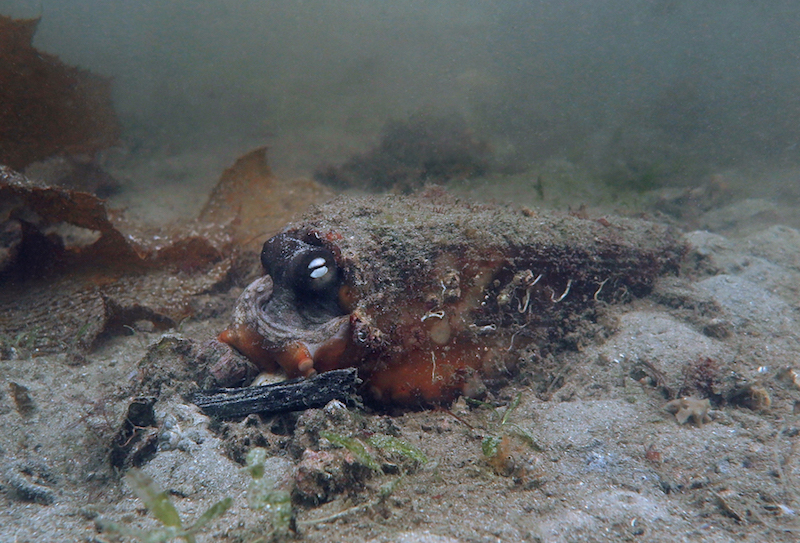 In the case of option B, editing of RNA is itself a kind of flexibility. It does not make a more complex brain, but makes a different brain in different conditions. The ‘smartness’ here is a sort of smartness in developmental processes themselves (see my first book). It’s certainly interesting, but it doesn’t seem likely to contribute a lot to behavioral complexity per se. When I say that, I’m thinking of the whole brain as responding in the same plastic way during development. Plasticity could give rise to more complex brains if the RNA editing was done in some cells and not others, in a way guided by different signals those cells receive. Then plasticity at the cell level would give rise to diversity in the whole brain’s make-up.[2]

Just above I’m also talking about role for RNA editing in putting a brain together. Things would be different if editing was being used to modify neural processing “in real time” – for example, as part of learning. It’s already part of mainstream neuroscience that changes to gene expression are involved in learning; modifying the synapses that link neurons involves changing the expression of genes within those cells. The genome is implicated in day-to-day (not just year-to-year and millenium-to-millenium) changes in brains. If RNA editing was being used here, that would really be something unusual. 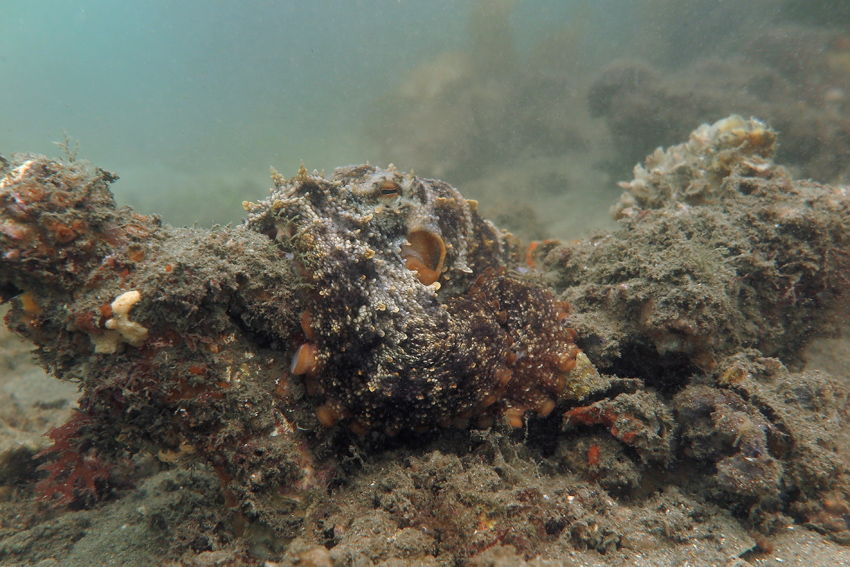 That’s as far as I’ve got. So far, I am not seeing much of a path through which editing could, as some of the press articles (not the Cell article) say, “give” these animals “their smarts.” Something would make sense is a situation where coleoid cephalopods started down a road of complex behavior that is unusual for molluscs, in a way linked to their giving up their protective shells (a few hundred million years ago), and this move put a premium on evolving a more complex nervous system, at the cell level as well as the “network” level. One way to do this, perhaps a way that makes sense given the slim initial resources of a molluscan nervous system, might be to make a lot of use of RNA editing. This would, as the Cell paper says, alter the path of further genetic evolution in these animals. Certainly there is something interesting going on.

The second and third octopus photos above were taken on a cephalopodic scuba dive with Elle Hunt, a journalist from the Guardian (the top photo is from a new site I’ll write about soon). Elle’s article is here. We found the small and lively octopus in murky Chowder Bay. On meeting Elle, the octopus blew water at her. We also did a dive that day at Cabbage Tree Bay, and found a Giant Cuttlefish at the exact spot of one of my first encounters with them, an encounter described in the first chapter of Other Minds.

[1] How unusual is this kind of editing, compared to other animals? I asked Karola Stotz, who knows a lot more about genetics than I do. Karola comments:

The genes of almost all organisms undergo some kind of mRNA editing to a differing extent. A-to-I editing [the kind discussed in the Cell paper] is particularly prevalent in human brain tissue and has been thought to be a driving force in human brain evolution. Recent results suggest that this kind of editing plays a critical role during early human development. Its exact function is however not yet known. Unlike in octopus, in human genes about 95% of the editing affects the non-coding parts of genes that will be cut out before the translation stage. They are mostly involved in the regulation of gene expression but may also change the final protein by influencing the splicing pattern of the coding regions of the underlying RNA. The deregulation of editing by interfering with the most important enzyme responsible for it, ADAR, leads to widespread neurological disorders.

[2]  A new paper on RNA editing in a nematode worm finds editing that is specific to developmental stages: “we discovered that almost half of these genes are edited in a developmental-specific manner…. [M]any pseudogenes and other lncRNAs are also extensively down-regulated in the absence of ADARs in the embryo but not in the fourth larval (L4) stage…. Taken together, our results suggest a role for RNA editing in normal growth and development by regulating silencing via RNAi.”

[3] The squid is Sepioteuthis australis, and the photo was taken at Cabbage Tree Bay. This is the first squid photo I’ve posted; they’re very wary and skittish animals. This one might have been 3-4 inches long.