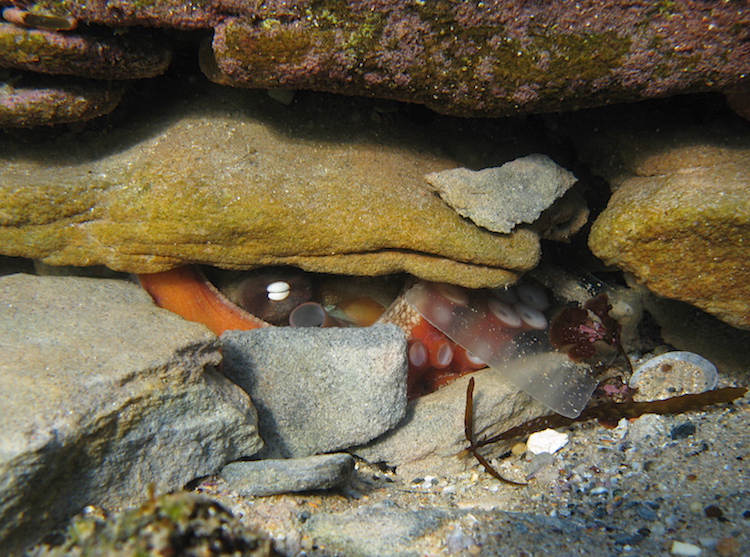 This post is a collection of pieces, a miscellany. First, the UK edition of Other Minds has been released by Harper-Collins. It is a superbly produced book, in a large format hardback with fine paper that brings out the black-and-white images mixed in with the text, as well as the color photos in the middle. The cover (a 115 year collaboration between Ernst Haeckel and Rodrigo Corral) is printed in a raised impression. You can feel each sucker on the octopus, and it seems to be reaching out of the paper to you. 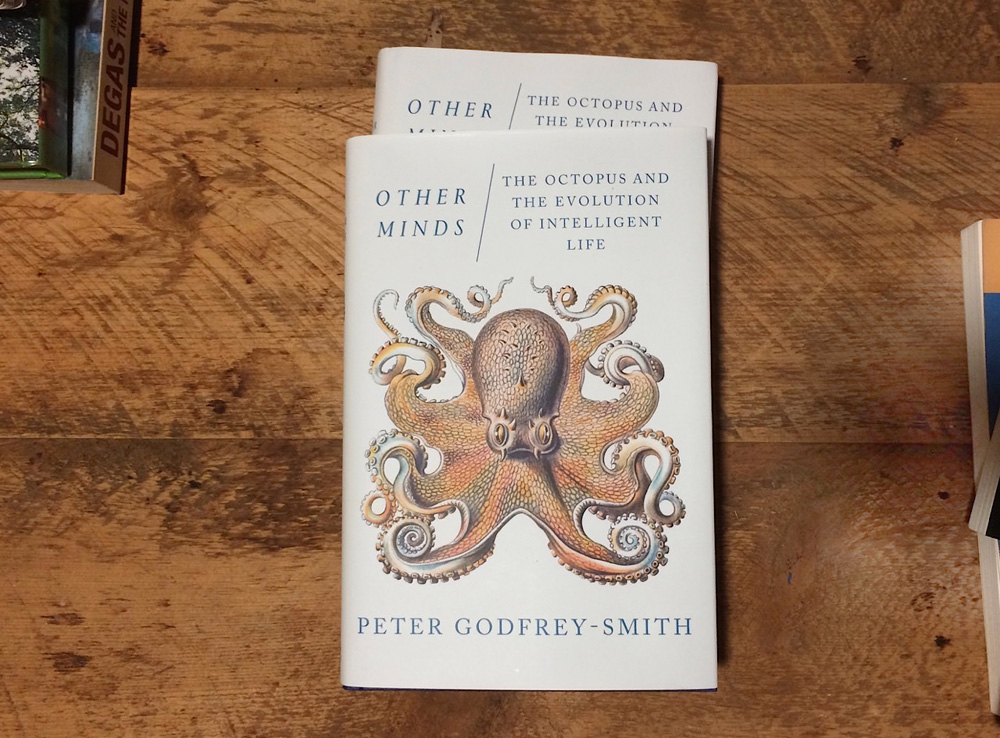 Just after the UK release, I did an interview on BBC Radio 4’s Inside Science show, with Adam Rutherford. We spent some time talking about the intense interest many octopuses show in novel objects, especially human-made ones. Often they collect and fastidiously arrange such objects around their dens. (I’ve written about this a few times: earlier posts with examples are here and here.) I mentioned one particular octopus who had taken a piece of clear plastic and positioned it like a skylight. That is the octopus at the top of the post.

I went back and looked at the photos from that dive, some years ago now. Here is a closeup: 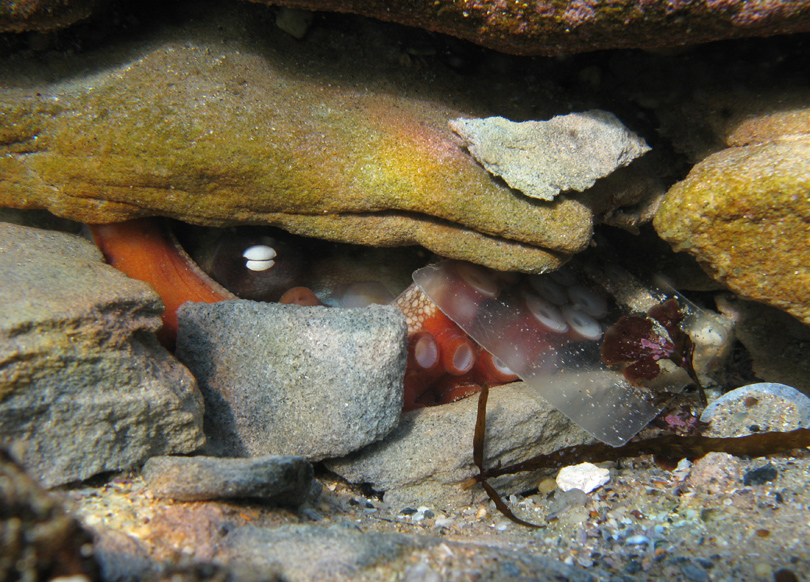 The arrangement of the stones is interesting also, though I don’t know if they made their way there accidentally. In later photos in the sequence, the octopus seems to first rearrange some of the rocks (though it’s hard to tell), and then pushes the skylight to the side and partially emerges. Here you can see the plastic sheet pushed into a cavity in the rocks beside the den. 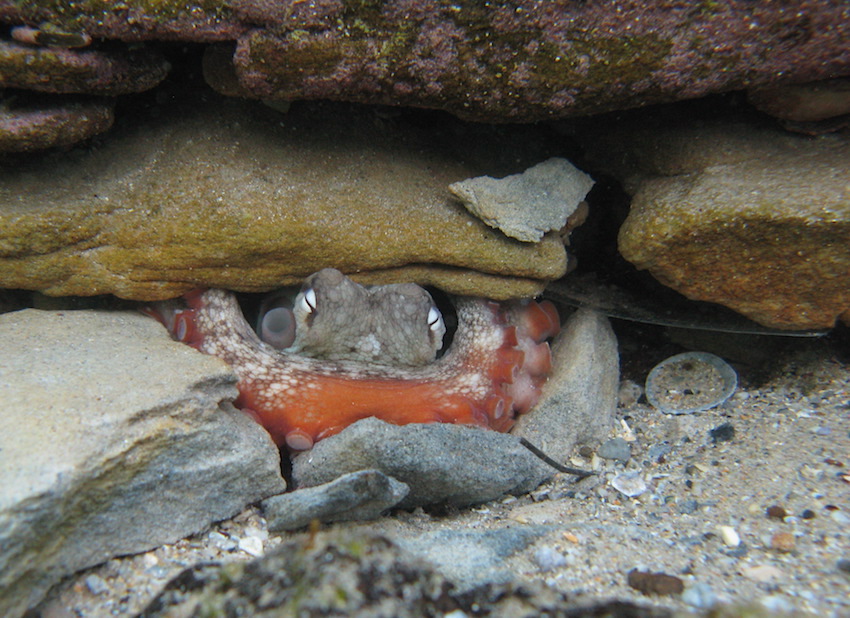 And here is one more shot of this octopus, featuring some subtle eye decoration. 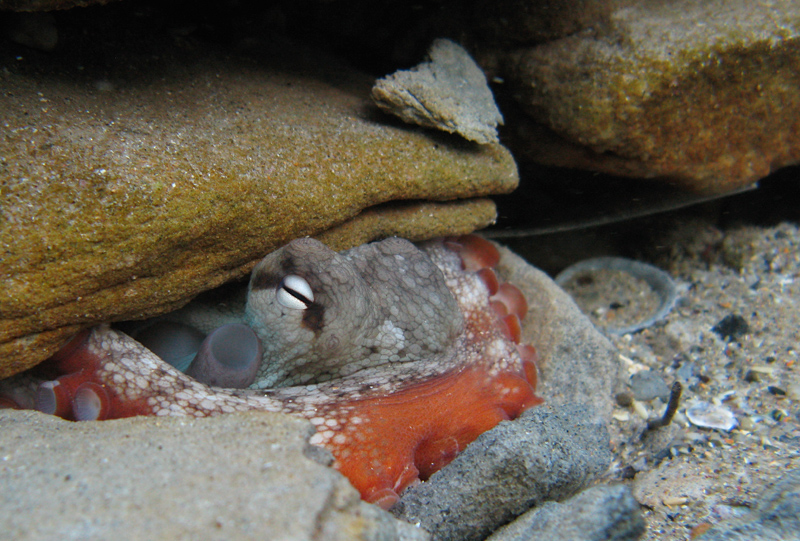 I don’t know if he restored the skylight afterwards. I wish I’d stayed around to see.

The early stages of writing Other Minds often had a sonic accompaniment, which I’ve always meant to acknowledge. I was reminded of it when a local photographer last week posted a photo of a solitary Violet Snail, washed up on the beach at Manly. Here is its shell, photographed by Murray Fraser of the Sprout Daily. 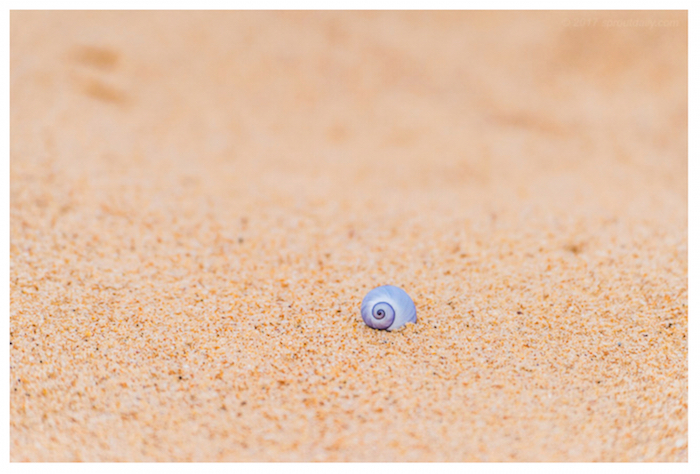 A Violet Snail builds a raft from its own mucus, and floats on the surface of the sea eating hydrozoans, such as the Portuguese Man o’ War and the By-the-Wind-Sailor.

In addition to its amphibious charm, this animal’s relevance to Other Minds comes from the title of a track (‘The Violet Shell and its Raft’) on a 2003 CD by Coelacanth, an experimental sound project by Loren Chasse and Jim Haynes. The CD was called The Glass Sponge. Coelacanth titles and inspirations are crammed with ancient and obscure animals. I often listened hard to these intricate, other-worldly sounds as I wrote the early chapters of the book.

This entry was posted in Bodies and Minds, Cephalopods. Bookmark the permalink.

4 Responses to 48. Other Minds in the UK