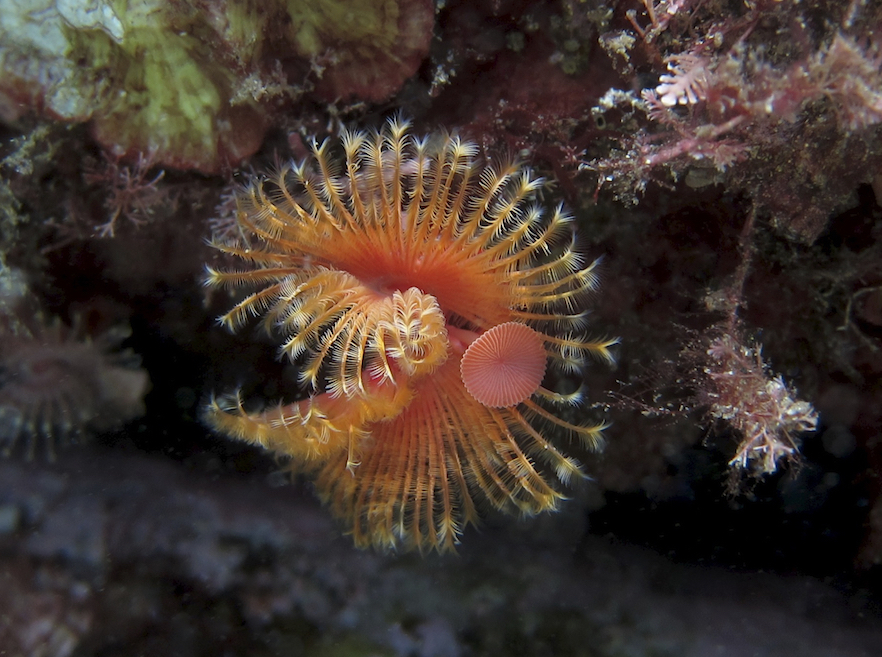 This photo is a repeat, and that is no accident; these are hard animals to photograph. It’s a serpulid worm, a marine cousin of earthworms. They are small (this one perhaps half an inch across), and when you get too close they disappear in an instant, snapping into a protective tube embedded in the jumbled overgrowth on their rock or reef.

I always thought they were sensing water currents when they triggered their sudden exits, as I said in the earlier post. But now I learn that some serpulids, and some of their relatives, the sabellids, have eyes, hidden in those feathery feeding structures on their front. They were watching me the whole time! Or not really watching; see below.

The article I read about them, by Michael Bok, María Capa, and Dan-Eric Nilsson, is mostly about sabellids rather than serpulids. The latter have that trumpet-like structure in bright pink in my first photo – a cap that blocks the entrance to the tube when the animal retracts – and sabellids do not. Here is a sabellid in Sydney: 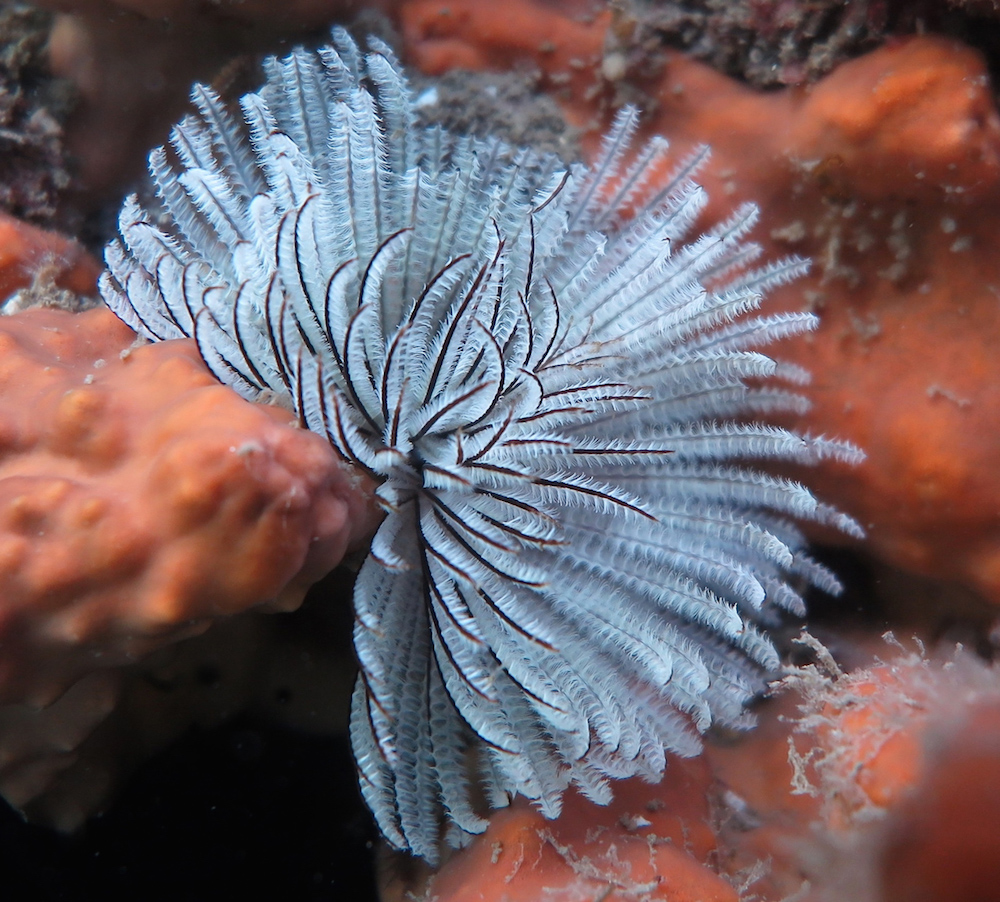 Not all these worms have been reported to have eyes, but many do, and those eyes are very diverse – “Sabellids are nature’s eye factories.” Below is part of a figure from the paper, showing some different kinds of sabellid eyes roughly arranged from simple to complex along the top. The second line in the figure has some closer looks. 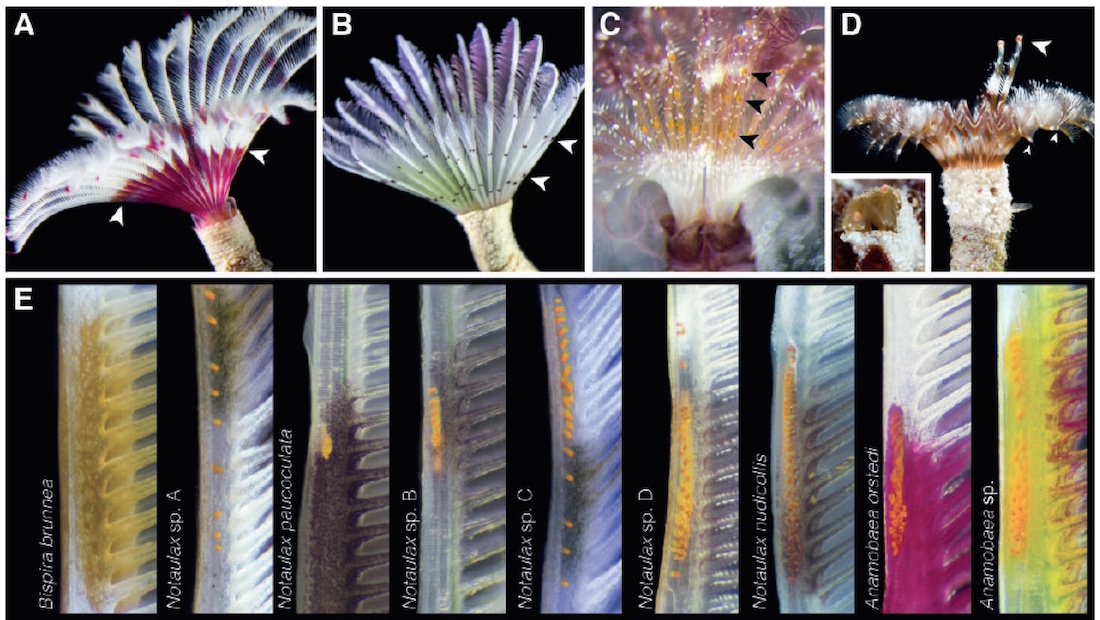 Some of these eyes are tiny, constructed with one or a few cells. Others are larger. Even among species without reported eyes, many have patches of pigment that may harbor light-sensitive structures. The article has me searching my old photos of these worms to see if I can find hidden eyes. I’ve not found any, but I am certainly suspicious, given their uncanny ability to sense my approach.

One of the authors of the sabellid paper, Dan-Eric Nilsson, has developed a general classification of eyes and other light-sensitive structures in animals, ordered from “class I,” the simplest, to “class IV.” This diagram, which gives the four grades, from left to right, without those labels, is from a National Geographic article about his work: 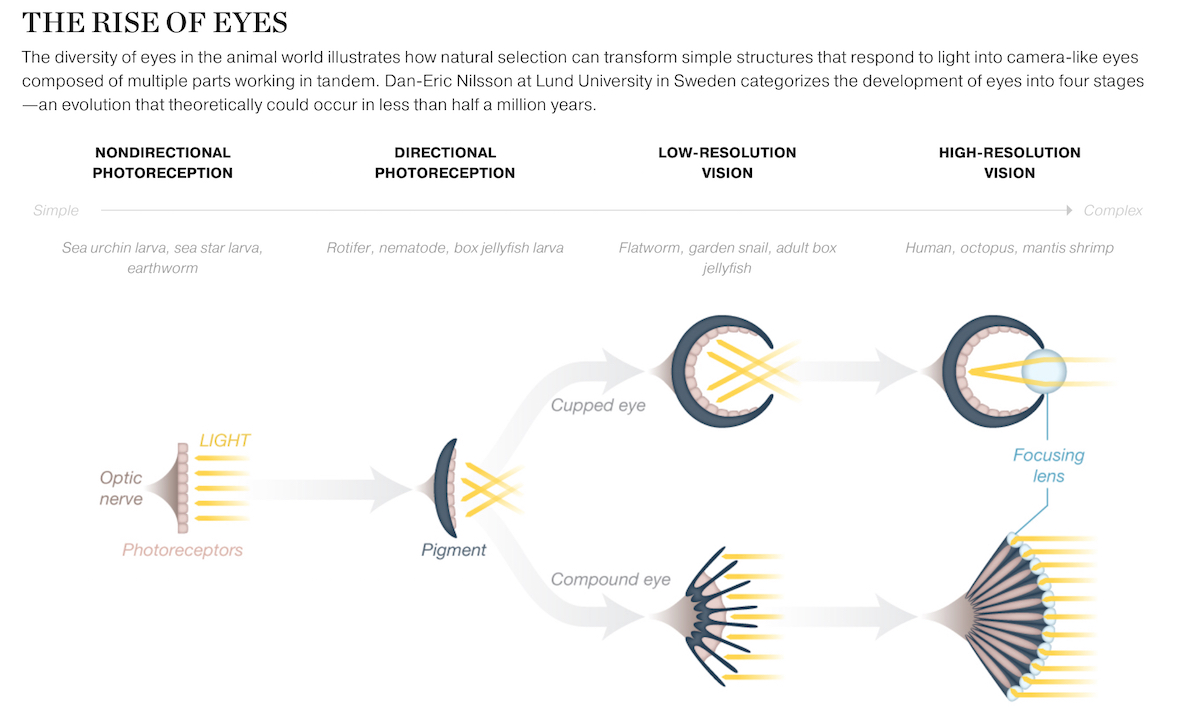 Only vertebrates, cephalopods like octopuses, and some arthropods have class IV eyes (though there are some borderline cases).

Sabellid and serpulid eyes are unusual enough for Nilsson to have them in a special category, “class IIb.” They are more sophisticated than the simple directional photoreceptors of class II, but not able to resolve an image in the way characteristic of class III. For this reason, Nilsson does not say that IIb eyes enable genuine seeing.

The worms are not alone in IIb; Nilsson has the eyes of some bivalve molluscs, such as clams and scallops, in the same category. Scallops have a row of eyes along the edge of the edge of their shell opening – along what looks like a lip. Like sabellid eyes, they seem to have an alarm function. I wrote about them, too, in the predecessor to this website, the Giant Cuttlefish. Scallop eyes are especially unusual as they have mirrors within them, directing light forward to a pair of retinas that sit behind the lens.

I decided to write something about all these eyes a while ago, and during a dive near Octopolis recently, I tried to get some more pictures of scallop eyes. Here is one: 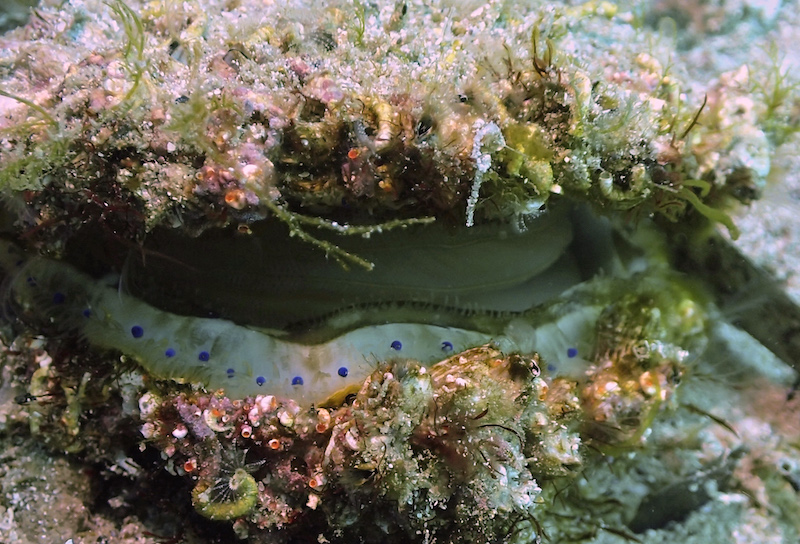 That’s not a great photo, and it’s a rather encrusted specimen. But those blue dots are all eyes. Let’s take a closer look: 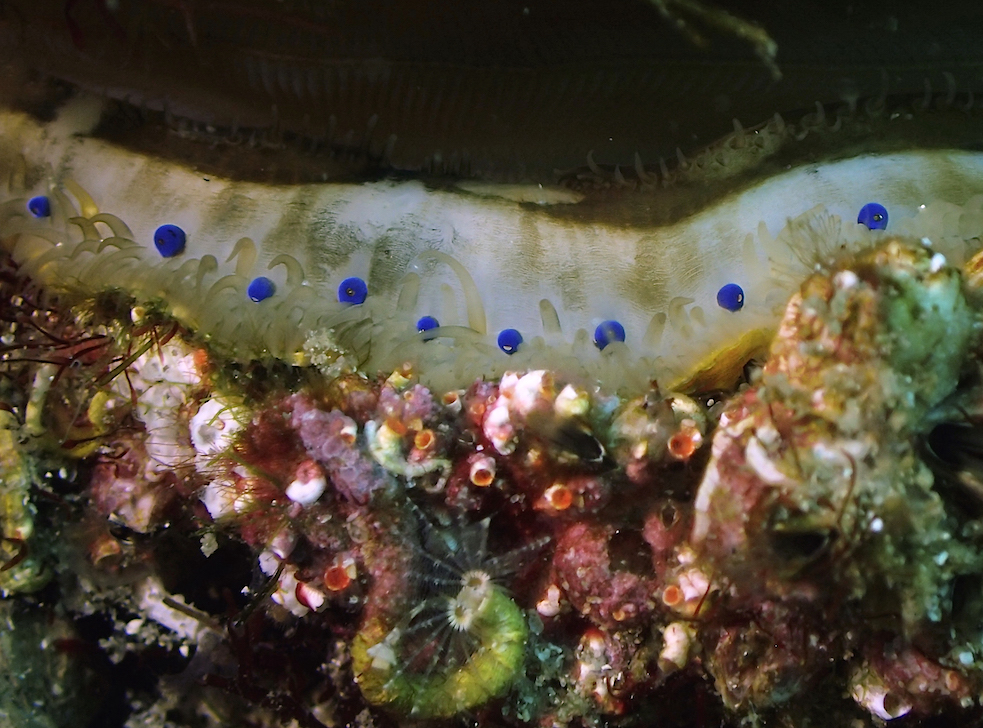 Peering at them, you can see the little shiny reflectors in each one, mirrors of nature, angled in various directions. Now we’re here, though, what is that green thing at the bottom of the image? 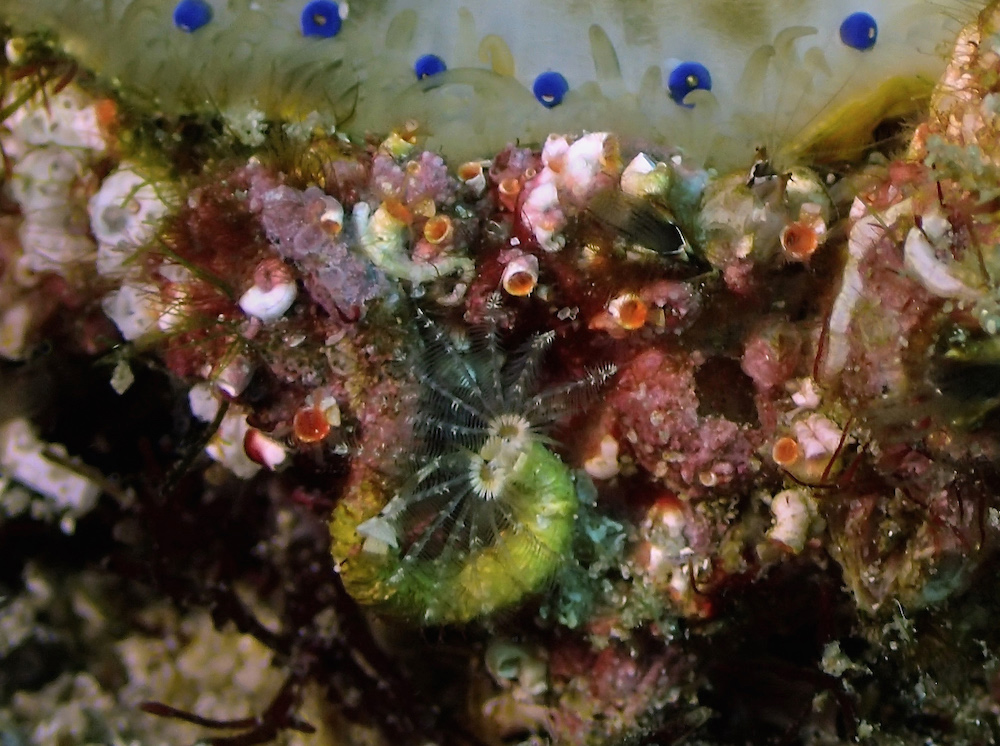 I think it might be a tiny sabellid, or a relative, setting itself up on the scallop, under the blurry quasi-gaze of its IIb-eyed companion.

I am just back from giving a series of talks and lectures about Other Minds, and related topics. I especially enjoyed an event at the Mid-Manhattan Library in New York.

Can someone identify the green worm? (*See below.)

Here are a few quotes about sabellids from Nilsson’s 2013 paper about eye evolution and the paper by Bok, Capa, and Nilsson.

“The reason that these [sabellid] photoreceptor organs do not fit in class III is that the animals are not likely to obtain any image information from them. To the animal, it is of no consequence which of the many photoreceptors that signal a threat because the animal can only respond to it in one way that has no direction: closing the shell if it is a clam and retracting into the clay tube if it is a fan-worm. These organs do not deliver any image information, and strictly speaking, they are not true eyes. They are multiple directional photoreceptors and in that sense, they are closer to class II than to class III. But because the function is so specific and the physical characteristics differ substantially from other class II receptors, it seems motivated to form a class IIb for multiple directional photoreceptors serving an alarm function.” 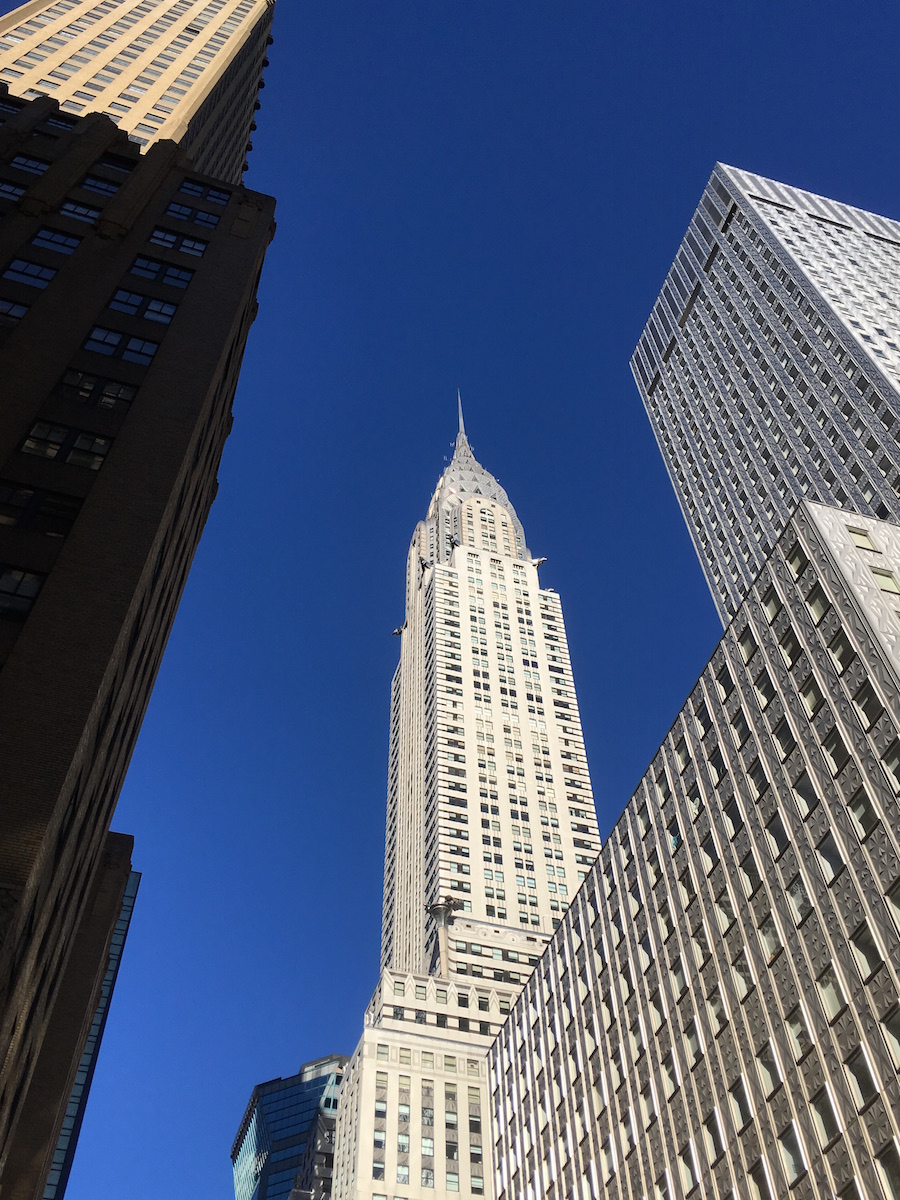 “Interestingly, the most elaborate eye types [in sabellids] do not contain the most complex ocelli [sensing units]. Type S eyes have four-cell ocelli, Type CP eyes have three-cell ocelli, Type CS eyes have one-cell ocelli, and Type CI eyes have two-cell ocelli. This contradicts the notion that the extant radiolar eye forms represent a single evolutionary progression. Instead, it seems that radiolar ocelli types emerged more than once and subsequently clustered into distinct compound eye types within their respective genera. Based on the structural difference in ocelli, we propose at least two or three independent emergences of radiolar ocelli.”

This entry was posted in Nervous Systems, Tree of Life. Bookmark the permalink.