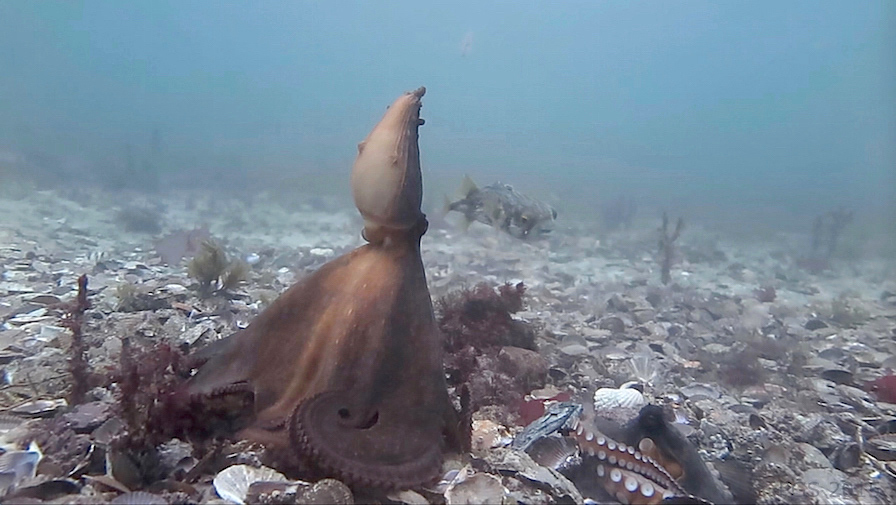 The octopus above has raised his mantle high over the back of his head. Another octopus sits below, to the right, and in center screen a puffer fish looks laconically on. Yesterday our third research paper about the Octopolis site, which was discovered by Matt Lawrence in 2009, came out in Current Biology. It’s freely available at the journal’s website at present.

The theme of the paper is signaling and displays between octopuses at the site. David Scheel is the first author, and he did most of the hard work on this one. We show that octopuses at this site produce a range of colors and displays that are associated with the outcomes of various “agonistic” interactions – fights, threats, retreats. The octopus above, with dark colors, spread arms, and that towering pose is producing behaviors that are all associated with aggressive behaviors – with chasing other octopuses away, and fighting if they don’t retreat. Above he’s facing off to the right. Here he comes, chasing down another octopus under jet propulsion, a few moments later: 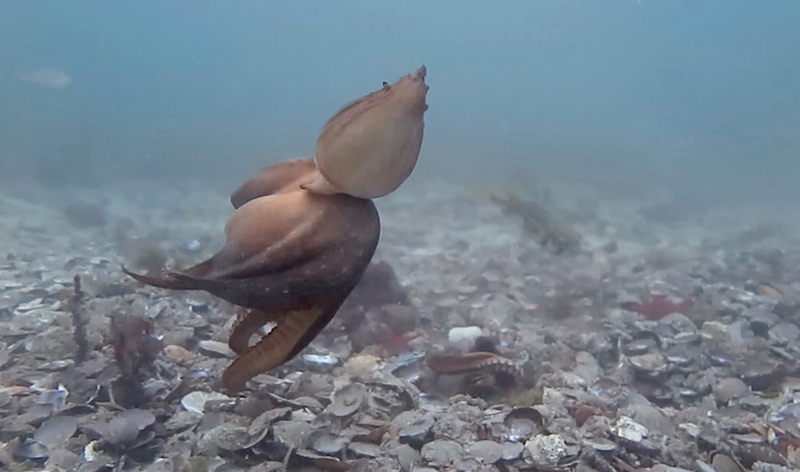 Here’s a front-on shot of that aggressive suite: 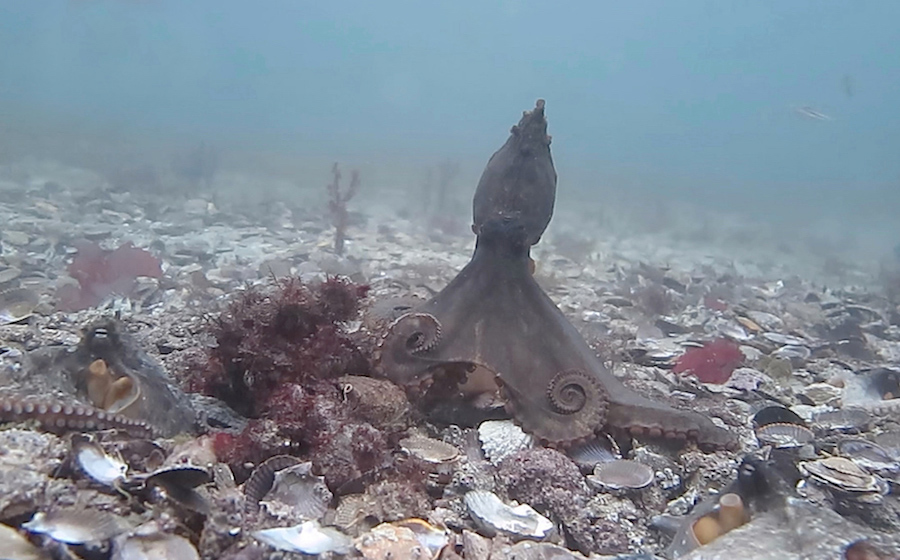 We call this the ‘Nosferatu’ pose, after the movie vampire of that name.

Octopuses who avoid confrontation in these situations tend to turn pale. They sometimes also produce a ‘deimatic’ display, a pale but blotchy pattern that’s also seen when octopuses flee predators. Here’s a pale fleeing octopus with a hint of those blotches: 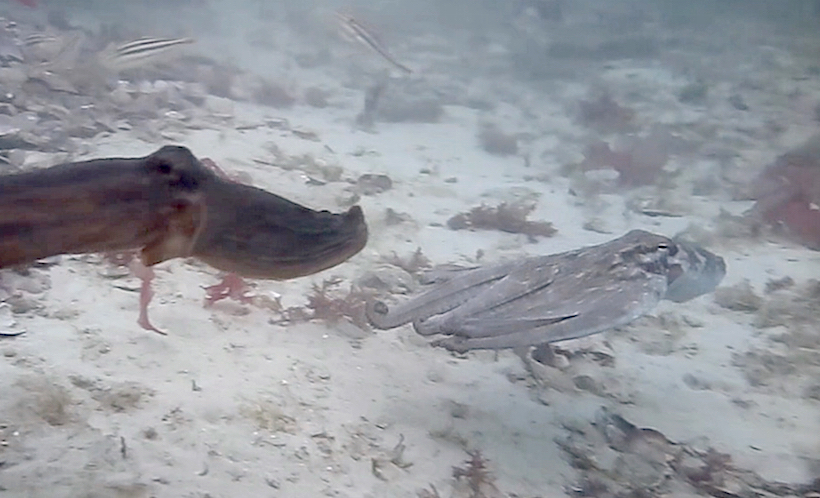 He’s being chased by the same octopus above.

Our paper looks first at the sheer association between these appearances and different behaviors. For example, dark colors go with aggression; pale colors with retreat. Such an association does not settle whether these color changes and poses really are signals, in a strong sense of that term – it doesn’t settle whether they affect the behavior of other animals who see them, and whether these patterns are produced by mechanisms that evolved because of those effects on others. (Even this is not quite a strong enough criterion, and I’ll say more about it below.*) Is it possible that all these colors and postures are just fortuitous effects of what’s going on in these animals when they produce, or prepare for, various aggressive and non-aggressive behaviors?

We don’t claim to have ruled this out with our evidence in the paper. The ‘Discussion’ section goes through some reasons to think that we’re seeing genuine signaling here, and in this post I’ll add a bit of detail to the reasoning – without claiming that the issue is settled.

For an octopus to go dark, it must contract the tiny muscles around its dark chromatophores, expanding little sacs of pigment. As we say in the paper, we don’t know of a reason why this should be associated with aggression, if the dark pattern is not supposed to be seen and have some effect. We also put some emphasis on the combination of behaviors seen in aggressive individuals: they turn dark and also ‘stand tall,’ spread their web, and raise their mantle. Those behaviors all maximize the apparent size of the animal. Might those behaviors have some other explanation, though? Perhaps the mantle-raise is just a prelude to vigorous use of the jet-propulsion mechanism that the octopus will activate when it chases down its foe? This is not likely. A mantle-raise is indeed often followed soon after by a jet, as in the photos above, but often a chaser jets at another octopus from a start with the mantle in its normal position, behind the head. A fragment of video to illustrate this is posted here, and here’s a frame from the video: 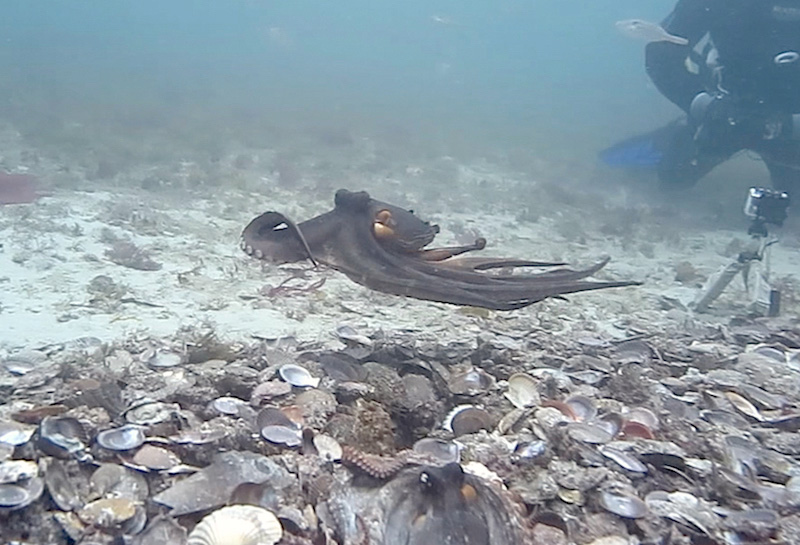 The other side of the question concerns the pale patterns seen in less aggressive octopuses, especially those who are fleeing. Here there is perhaps more uncertainty; blotchy pale ‘deimatic’ patterns are seen in many cephalopods as they flee a predator. So as we say in the paper, this pattern at our site might be interpreted as “a pre-existing accompaniment to flight behaviors” – something octopuses do when they are under stress and fleeing. However – and much credit to David for picking up the importance of this fact – many of the ‘deimatic’ displays in our sample were not produced by an octopus that was fleeing, but by an animal creeping back to its den in the presence of an aggressive display, or returning after an ‘eviction’ by a stronger animal. So while we agree there is uncertainty about the role played by these colors, patterns, and poses, I think it’s likely that at least some of them (such as the Nosferatu combination) are produced to be seen by other octopuses, and to influence their behavior.

While on the topic of jet propulsion, here’s octopus-as-missile: 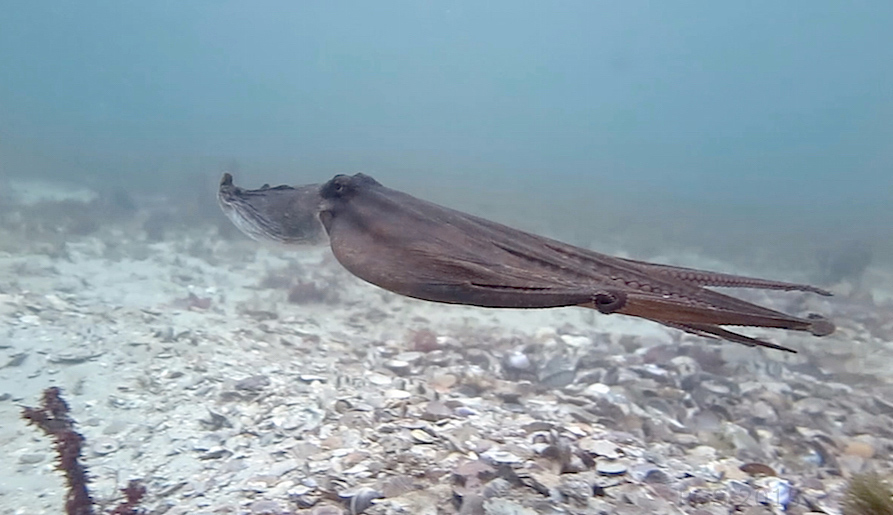 Miscellaneous Notes: Our paper has been discussed over the last couple of days in stories by the BBC, The Guardian, ABC news (Australia), New Scientist, NPR’s Morning Edition, and others (a summary of the coverage is here).

* More Notes About Signaling: It’s quite difficult to give a good definition of signaling for purposes such as these. One of the best I know is by Maynard Smith and Harper, used in their book Animal Signals.

We define a ‘signal’ as any act or structure which alters the behavior of other organisms, which evolved because of that effect, and which is effective because the receiver’s response has also evolved.

This is perhaps a bit too broad. Suppose I give you some food that enables you to act differently from the way you otherwise would. Suppose also that you and I are closely related, the donation is beneficial from a genetic point of view to me as well as to you, and that is why the giving and receiving behaviors evolved. This passes the Maynard Smith and Harper test but it looks different from signaling. It’s different because of something about the way that the receiver’s behavior is altered – the food is intrinsically beneficial, rather than having a more “symbolic” role. Let’s not worry about this, though. The Maynard Smith and Harper definition is a good one in other ways, as it captures, in just a few words, nearly all of the important contrasts between signaling and other things.

If the act of the “sender” did not evolve because of its effects on the receiver, then the act is not a signal. In our octopus case, suppose the dark color of an aggressive animal does affect other octopuses, but the dark color is not produced by a mechanism that evolved for that reason; the effect is incidental to the evolution of color-producing mechanisms. Then the color is not a signal. Or suppose that the sender produces the dark color because it has an effect on other octopuses, but this effect is merely a fortuitous consequence of something about the perceptual and neural mechanisms in the “receivers.” Then, again, no signal. What Maynard Smith and Harper are aiming to capture is the idea that the sender’s behavior and the receiver’s behavior must have coevolved – each is an adaptive response to the other.

“Evolution” should be understood in a broad way here. Maynard Smith and Harper might have generalized a bit, and talked of behaviors that evolved or were learned or were chosen. There are several processes by which sending and receiving behaviors can become aligned in a way that yields communication.

A meeting of the Jervis Bay Dive Club last month included some celebration of all the Octopolis work, including the new paper. A highlight was an amazing Octopolis cake (or cake community), made by Lisa Bretherton and pictured below. Thanks, Lisa. 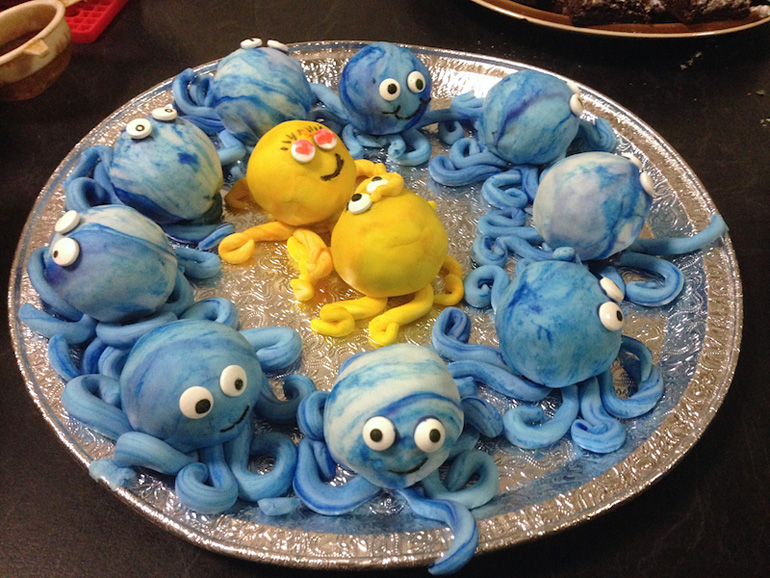