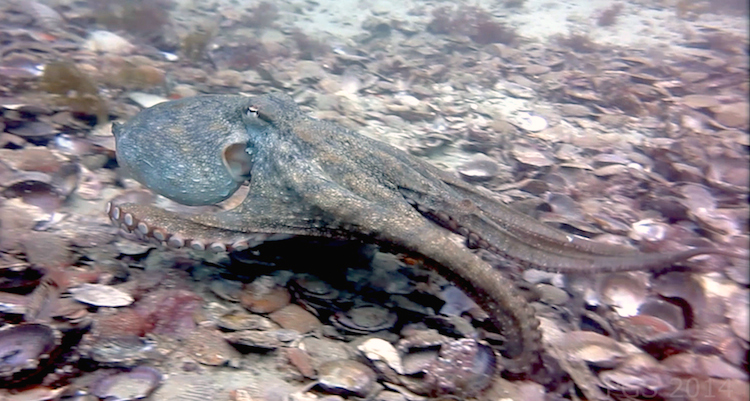 Octopolis is a site in Jervis Bay, Australia, where octopuses have been living and interacting in unusual densities for at least five years now. The image above is from a video taken at the site in February this year. My previous post on Metazoan was about “slow life” – animals behaving at very different time-scales from us. The image above shows an undeniable case of fast life, as an octopus zooms back to its den with jet propulsion. Movement is from bottom right to top left. 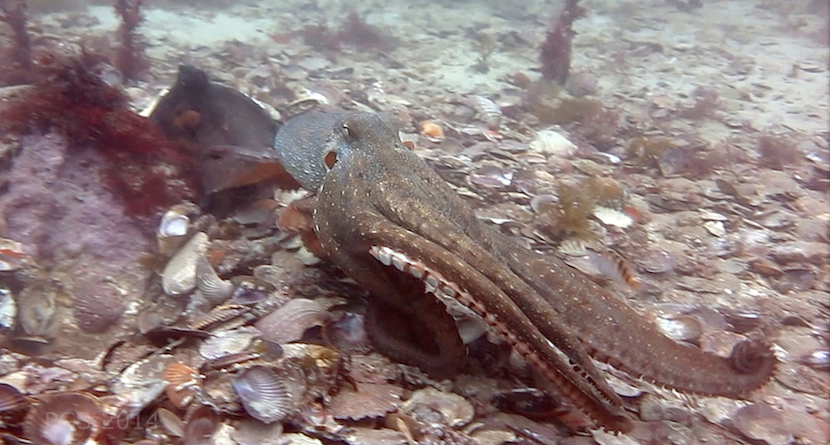 Octopolis was discovered by Matt Lawrence in 2009. In 2012 I wrote a paper with Matt that gave an initial description of the site. Since then we’ve linked up with David Scheel, an octopus expert who works with the Giant Pacific Octopus in Alaskan waters. Earlier this month our second paper, with David as first author, appeared in the journal Scientia Marina. It’s freely available online.

The paper is about our octopuses as “ecosystem engineers” – about the changes they seem to be making to their immediate environment by bringing in scallops for food and leaving their shells. Dozens of species of fish and other animals are found in high numbers on and around the Octopolis shell bed, and in much smaller numbers outside. Predators are now being attracted to the site, and during a visit last year the octopuses were having their behaviors severely constrained by the presence of two large carpet sharks who’d take up residence. The sharks were observed ambushing fish overhead, and the octopuses seemed to treat the sharks with great caution.

We think that the octopuses have significantly changed the ecology of the Octopolis site through their behaviors. We don’t claim this is something octopuses routinely do; the site might be a special one. Octopuses have an unusual combination of features for someone interested in action and its role in animal life. 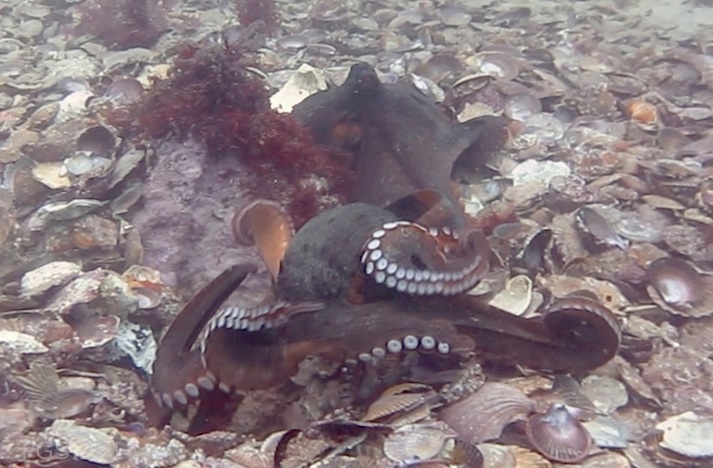 Octopuses are very manipulative animals, dexterously interacting with all sorts of objects around them, usually looking for a way to eat things, but not always so.* Manipulation is an important contributor to patterns of feedback between perception and action. It’s a general fact that what you do now, when you act, will have consequences for what you see and feel at the next steps in time. Present action shapes future experience. Manipulation of objects is not the only form of this, but it’s an important form. In general, an animal that manipulates and rearranges objects can be expected to have a lot of effects on its environment. Octopuses, though, are unusual in this regard because they are nomadic and short-lived animals. They are also usually rather asocial (with a few exceptions). So octopuses will often have a lot of effects on their immediate surroundings, but don’t usually stay around for long enough (in one den, or on the earth) for these effects to accumulate. At Octopolis, though, a combination of ample food and a difficult environment for building dens has led to octopuses consistently living at high densities in one favorable spot, a spot that their actions have now transformed.

More on manipulation: here’s the video from which the images above were taken. One octopus, who’s been wandering around, jets back to the central den where two others respond to his or her arrival.

The last behavior in the video is particularly interesting. The octopus at lower left appears to propel a bunch of shells at the arriving one. There’s a brief discussion of a similar behavior in our new paper; an octopus moved some distance away from its den to dump shells into the den of another. In the case in the video here, it’s not clear whether the left-hand octopus used shells as projectiles to bother the other octopus, or merely jetted water at the other, at an angle that happened to result in shells showering the target.

As you can see from the first stages of the octopus’ arrival, there’s a lot of low-level jostling and jousting at Octopolis. We might have some video that makes this sort of projectile use clearer (but need to take a closer look at it). This would be a very interesting behavior, and we’ll certainly be looking at it in our further work.

* Michael Kuba, in a recent paper, discusses work showing that octopuses do manipulate objects they know they’re not able to eat.

This entry was posted in Octopus and tagged Octopus. Bookmark the permalink.