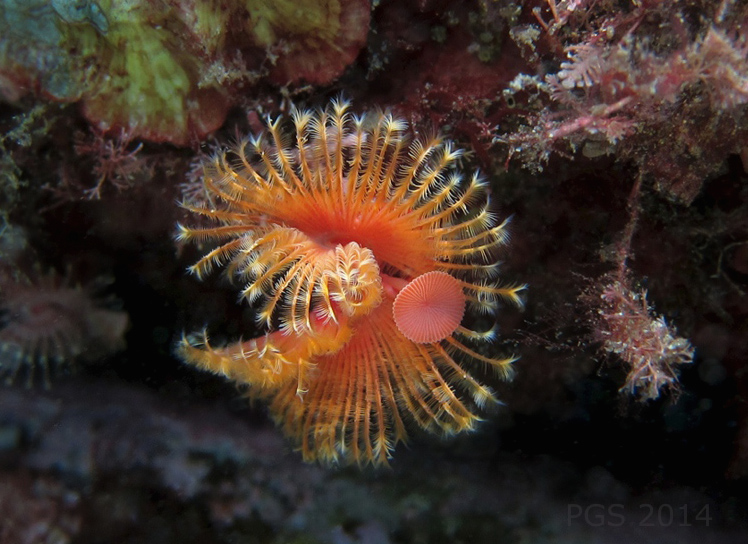 When I first saw one of these creatures in the sea, several years ago, I spent some time looking in the wrong parts of my reference book trying to work out what it was. I thought it might be some sort of anemone, but that is miles away from being right. It’s a worm – a worm in the familiar sense, an Annelid, whose terrestrial relatives include the humble but indispensable earthworm. More specifically, it’s a serpulid worm. That great orange flower is the only part of the animal that’s visible; the rest of the body is fixed in the reef wall behind it.

Here’s another shot of a serpulid, looking like a very eccentric bird, or angel, framed by a wall of red algae that had covered much of the reef when the photo was taken. 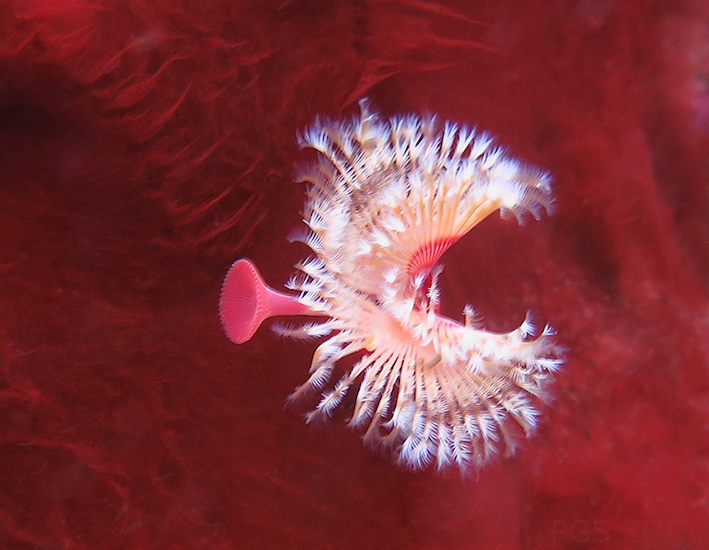 A clue I should have paid more attention to when I wondered about these animals was their behavior. Photos like these are hard to get because the animals are small and even a tiny disturbance in the water nearby results in the animal suddenly retracting everything that’s visible here, leaving almost nothing outside the reef surface. The vanishing takes place in a flash, much less than a second. Serpulids and their relatives are also uncannily good at distinguishing between natural currents and water displaced by intrusive cameras. Here’s the one photo sequence I have in which the first shot shows the animal in full flower, and the second catches the retraction almost complete. This one is not a serpulid, but a close relative, a sabellid worm. Sabellids don’t have that trumpet-like cap, which comes in last and seals off a serpulid when it retracts.‡ First the flower: 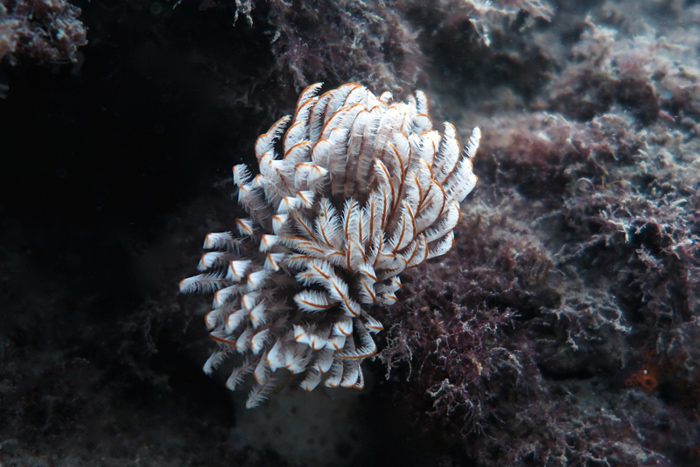 And now the caught-in-the-act retraction: 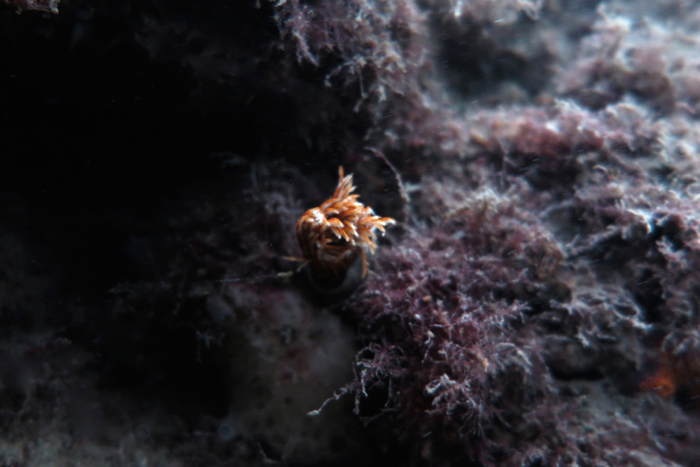 This lightning-fast behavior, simple though it is, suggests a nervous system honed in a history of mobility. Annelids are bilaterally symmetrical animals, fairly close to molluscs on the evolutionary tree.† Though earthworms appear to live fairly quiet lives, some marine annelids are quite a bit more active. A little while ago I wrote here about the idea that three groups of animals are special because they evolved some species with “complex active bodies” – vertebrates, arthropods, and (within the molluscs) cephalopods. Echinoderms are another group with some species that approximate this sort of life, and, as a commentator on that post noted, so are annelids.

The zip-like retraction of these animals also reminds me of a concept I’ve been running into while reading about the history of theories of life and mind. In the 18th and 19th centuries the concept of “irritability” became important both in experimental work on how bodies operate and theories of the nature of life itself. The term was introduced, in this scientific/philosophical sense, by Francis Glisson towards the end of the 17th century. Glisson interrupted a career in experimental physiology to write long Latin tomes about matter and life. He was a sort of panpsychist, and he thought that irritability was a feature of all “bodily fibers,” not only of nervous systems. He hoped to use this idea to bridge the gap between mind and matter. As one historian puts it, Glisson wanted to “cut the Gordian knot of problems associated with Cartesian dualism by showing that all matter was intrinsically alive and endowed with faculties of perception, appetition, and self-motion.” Irritability is not mere responsiveness to stimuli, but responsiveness that has some purpose to it. In Glisson’s words, all matter “perceives itself, loves itself, and strives to maintain itself.”

The concept of irritability was picked up and made much more influential by the Swiss physiologist Albrecht Haller. Unlike Glisson, Haller didn’t see irritability as the basis for a non-dualist view of the mind. He did, though, see irritability as one of two features that are fundamental to all life. Living things show sensibility and irritability, where irritability, the behavioral side of the pair, is visible in contraction (dramatically exemplified by the serpulid). Haller did a series of experiments on what causes various parts of bodies to contract, and gave a physiological theory of irritability which seems to have guided a lot of work in the following years. Irritability also returned to philosophy, and the mind/body problem in its basic form, when Julien Offray de la Mettrie, the scandalous philosopher-doctor of the French enlightenment, used Haller’s work and irritability to defend a wholly materialist theory of the mind in his 1748 book L’homme Machine.* 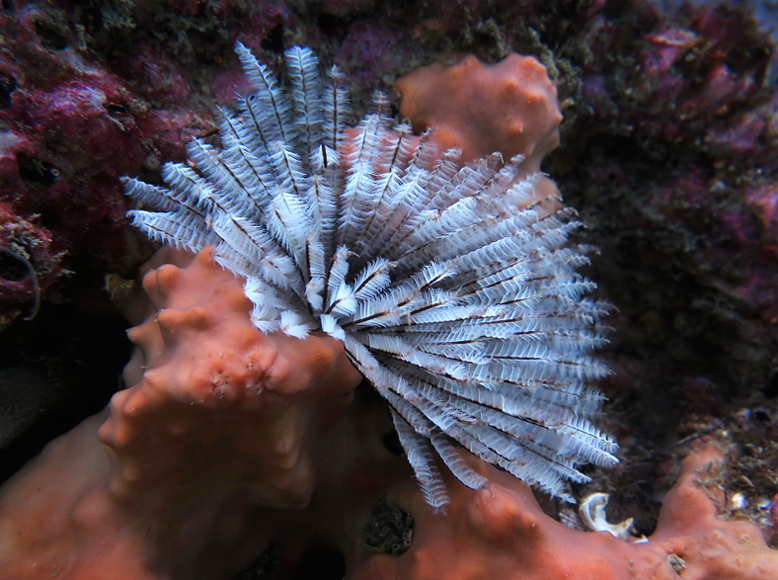 Irritability seems to have had a dual life, one as an experimentally-based concept that guided early modern physiology, was linked to the study of muscles and nerves, and led in a direct line, I suspect, to the modern notion of excitability, a concept based firmly in the electrical properties of cells. Second, it has provided a clue for people thinking about matter, or about living matter, who are looking for a feature of the physical world that provides a first step towards a non-dualistic treatment of mind and body. In this second role it’s been one of several ways of expressing a message I see as valuable but very hard to get right – a message about the error of thinking of matter itself in an overly inert and “dead” way. Treating activity as present in the basic ingredients was a good idea; treating something like purpose as present there, also, was more of a wrong turn. The purposive side of living activity comes from the shaping of patterns of receptivity and activity by selection, by feedback.

† Here’s a fragment of the animal part of the tree of  life, with annelids in red:

‡ I don’t know the species of any of the serpulids and sabellids shown. My reference book, by Graham Edgar, pictures the top one but labels it “Serpula sp.”

* Kathleen Wellman: “Haller’s findings on irritability gave La Mettrie the decisive empirical evidence to support the active force of matter which he so effectively used in L’Homme machine.” La Mettrie may have died, in 1751, from an overdose of truffles.

This entry was posted in Bodies and Minds, Nervous Systems, Tree of Life and tagged annelid, irritability, nervous system, serpulid. Bookmark the permalink.