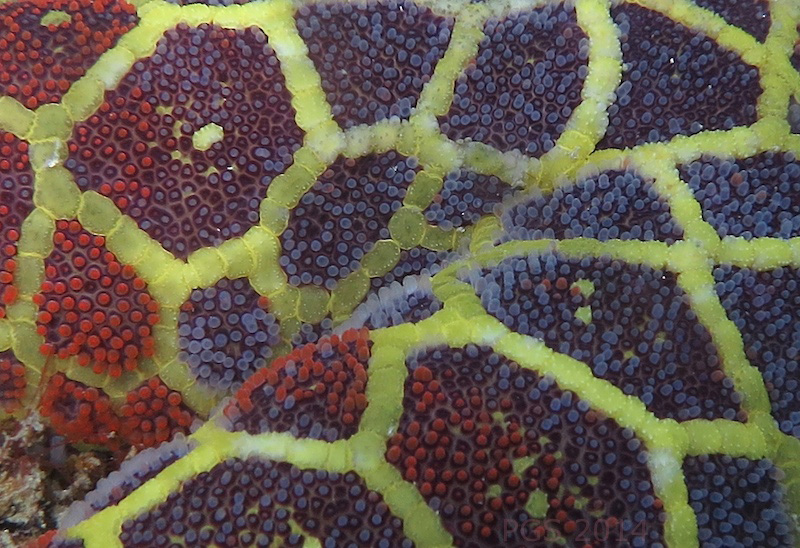 The photograph above is a close-up of a starfish, encountered at Fairlight in Sydney last month. I’m pretty sure it’s a Mosaic Sea Star, Plectaster decanus.

I took these shots without knowing how interesting they would be once I zoomed in. The photos were taken with natural light, no flash. The animals are striking enough from a distance, but truly beautiful once we’re down in the world of their skin. Here is another image at that scale: 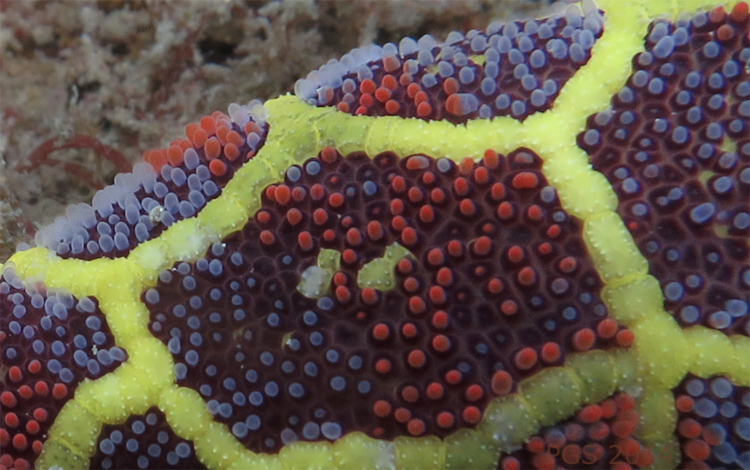 And here’s how the whole animal looks: 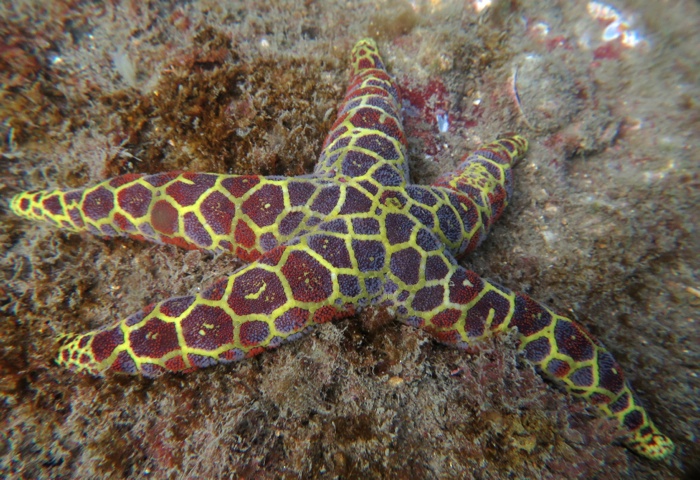 Reading about them, it seems the Mosaic Sea Star eats sponges, which would explain its presence in the sponge garden of my last post, and is one of the most poisonous starfish, probably as a result of chemicals ingested from the sponges. In this way it’s like some nudibranchs, with bright colors advertising inedibility and poisons deriving from a sponge diet. I don’t know whether, in this case or the nudi case, some of the colors themselves come from their sponges.

Starfish are echinoderms – that’s their phylum, their basic group within the animals. At the end of this post I’ve marked their place on the tree of life. They’re closer to us than many of the other animals I’ve been writing about – closer than sponges, molluscs, and arthropods, though not closer than ascidians. They have nervous systems, in a “nerve net” organization. Each arm, like the arm of an octopus, seems to have some independence of action, and there are simple eyes on the end of each arm. Unlike an octopus, there’s no central brain to pull things together.

Starfish lead quiet lives, slowing roaming the sea floor and eating other invertebrates. I’ve been thinking about them more than usual because of their relationship to some ideas in a very interesting paper I read recently by Michael Trestman. Trestman gives a broad categorization of animals. Consider all the animals who have complex active bodies (CABs). His main summary runs like this:

Trestman says that out of all the many forms of animals that have evolved – perhaps 33 phyla, perhaps more – only three lineages, two phyla and a small part of another, evolved complex active bodies. These are arthropods (including insects, spiders, crabs), chordates (including us), and cephalopods, who are one branch within the molluscs. Trestman thinks that animals with CABs form a pretty definite and recognizable cluster, though CABs evolved independently a number of times. Complex nervous systems, and eventually minds, co-evolved with these special kinds of bodies.

I’ve spent a lot of time thinking about cephalopod-chordate comparisons on this website and its predecessor; it’s interesting to add the arthropods and think about the trio that results. As Trestman says, arthropods were probably the first animals with bodies of this kind, arising in the early Cambrian, and their very presence may have then altered the evolution of other animals.

Trestman’s categorization looks coarse, and you might also wonder whether it’s too impressionistic, but it is starting to look to me like a very useful idea. A question that comes to mind right away, then, is whether there is a gradient here, with a range of animals that have a partial CAB, to various degrees, or whether there is a pretty definite divide, at least among living forms, between animals with CABs and animals without them. Within the arthropods, cephalopods, and chordates, there are various animals with much simpler behaviors than others, so in that sense there’s certainly a gradient. But who are the most CAB-like animals outside Trestman’s trio of groups? Is there a sharp divide in that respect? 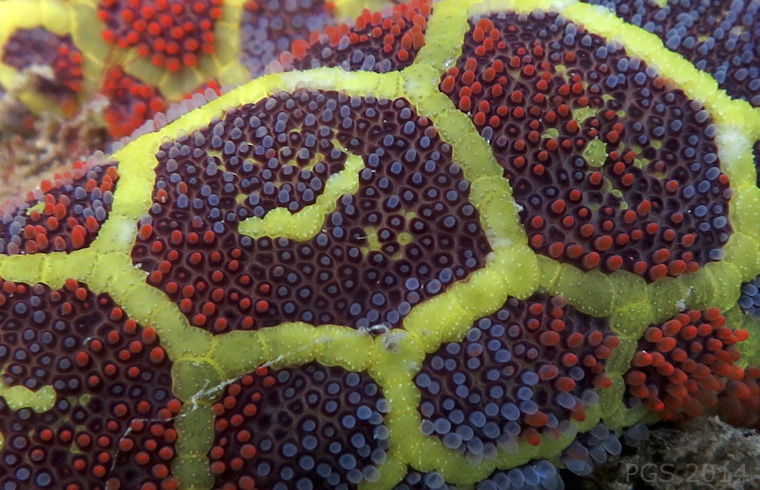 If there’s a notable grey area among living animals, it might be seen in starfish. Trestman does not discuss echinoderms at all in his paper. I was once a bit startled, down at Octopolis, to see a large starfish moving at a visible and disconcerting rate over the sea floor; it led to a mild gestalt-switch in how I view them. Above I said that starfish “lead quiet lives,” but perhaps this is not so clear. The web is full of videos of interesting behavior by starfish. These behaviors become visible, though, only when sped up, and the best videos are generally taken in time-lapse – a couple of classics are found here and here. I’ve started looking for the fastest and most complex behaviors known in this group. A website here says that one candidate for the starfish speed record (and hence the echinoderm speed record) is about 9 feet per minute. A video here has some complicated interaction that’s visible in a 3x speed-up. Even here, though, the behaviors amount, as far as I can tell, to a quicker and more complicated scramble than usual, and that’s all – it’s very far from the sort of thing seen in octopuses and insects.

Trestman did not list speed, per se, in his description of the behaviors seen in CABs. He included “active, distal-sense-guided mobility,” but this leaves open whether the movement is fast or slow. Might there be CABs outside the familiar groups that are not obvious to us because their action occurs on a different time-scale? If so, does speed itself matter – is it part of what “complexity” and “activity” involve, in the senses that matter here, or is speed just an optional feature of a few cases?

My first thought is that there might be quite an important relation between speed and other forms of complexity. Returning to Trestman’s list, the final and an important one is “active object manipulation” – using limbs and mouth-parts to do complicated things to other objects, transforming them in ways that go beyond mere demolition. This is a very notable feature of the behavior of complex chordates, arthropods, and cephalopods, and as far as I know, it’s only seen in the same organisms that can do things quickly.

In response to this, it might be objected that I’m wrong to treat rapid behavioral manipulation using limbs as so different from chemical manipulation, which many slower-acting organisms have mastered instead.

1. Some starfish sexual trivia, for the person who thinks they’ve heard it all: “In some species such as Nepanthia belcheri, a large female can split in half and the resulting offspring are males. When these grow large enough they change back into females.” (Via Wiki. The original paper is here.)

2. Here is the location of echinoderms on the animal part of the tree of life:

3. A possible lost fourth origin of CABs that Trestman mentions is nectocaris. This might, on the other hand, be an early cephalopod.

4. An echinoderm website which compiles some time-lapse classics is here.

This entry was posted in Arthropods, Cephalopods, Nervous Systems, Tree of Life and tagged echinoderm, starfish. Bookmark the permalink.