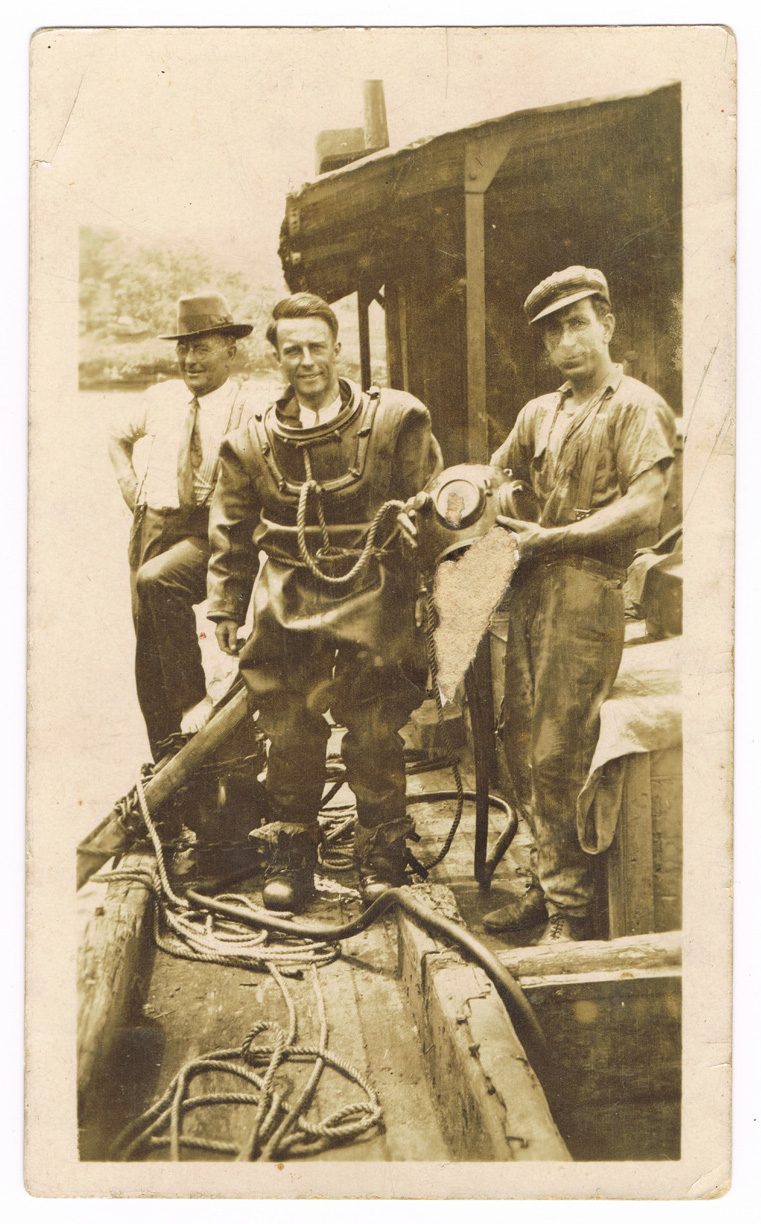 The man wearing the dive gear in the center of the photograph is my grandfather, Dick Dawson. The scene is probably in Australia, some time in the 1930s, though both date and place are uncertain. Dawson was an engineer who worked on submarine telegraph cables.

The man on the right holds his dive helmet (above the one part of the photo that’s lost some of its surface). An air hose snakes from below decks to what looks like the helmet’s back. At the left is a ladder leading down into the water. I like the guy at the ladder with bare feet and carefully knotted tie.

The photo, which was found recently after sitting in a box for decades, makes me marvel at its technology – the technology of 35 mm film, their cameras, and prints. The print itself is tiny, about 3 inches high. But it is full of rich detail, 80 years on, that appears when magnified (a higher-resolution scan is linked here).

The other piece of 1930s technology that has me thinking is the dive gear, with the big helmet, weighted boots, and air line to the surface. Self-contained underwater breathing apparatus (SCUBA) had not yet been invented, though it was not far off. The first useable system was built around 1942 by Émile Gagnan, working with Jacques Cousteau in France. I described some of this history in a post on my old website, here. The modern one-hose scuba system was invented by an Australian, Ted Eldred, a few years later.

Until scuba, divers did not swim with fins, but walked along the sea floor. This must have given the undersea world a very different feel for them. The sea was experienced with the same topography, the same relations to space and movement, that we know from land. With scuba you are rarely standing, instead hovering, or flying, above and among things. Free-divers who held their breath could swim rather than walk, of course, and if they wore weights then they experienced, for few minutes, the same weightlessness that a scuba diver encounters now. With the old gear in the photo, though, the sea would feel instead like a forest, in which humans walk while other animals might fly. 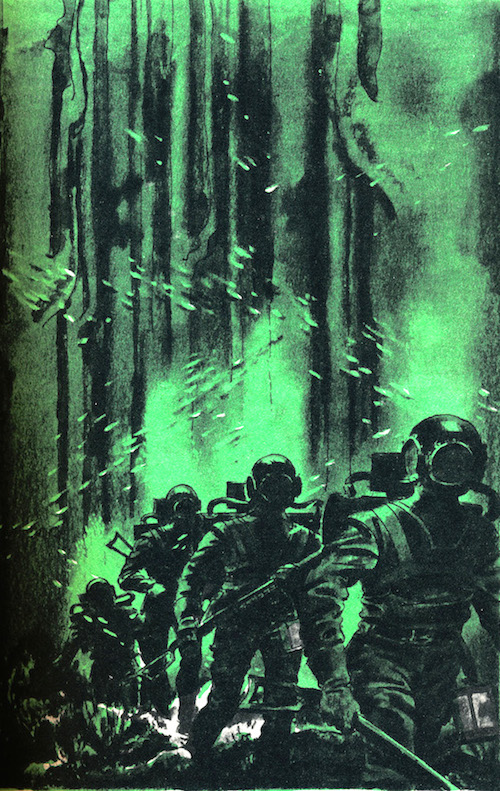 We can get a sense of the difference between pre-scuba and post-scuba experience from the imagined explorations in Jules Verne’s 20,000 Leagues Under the Sea (1870). The image above is a scan from a 1956 illustration for the book. In Verne’s story, the submariners leave their ship from time to time, using equipment that Verne describes in some detail. He imagines a self-contained air supply with tanks, not an air hose to the sub, so he could have turned his divers into fish, but instead he always has them walking along the sea floor, behaving just like people moving through a forest or city. The seascape itself is given a rather terrestrial character in the story, too. Even Jules Verne’s imagination seems to have been shaped, and perhaps constrained, by assumptions about the technologies of movement. 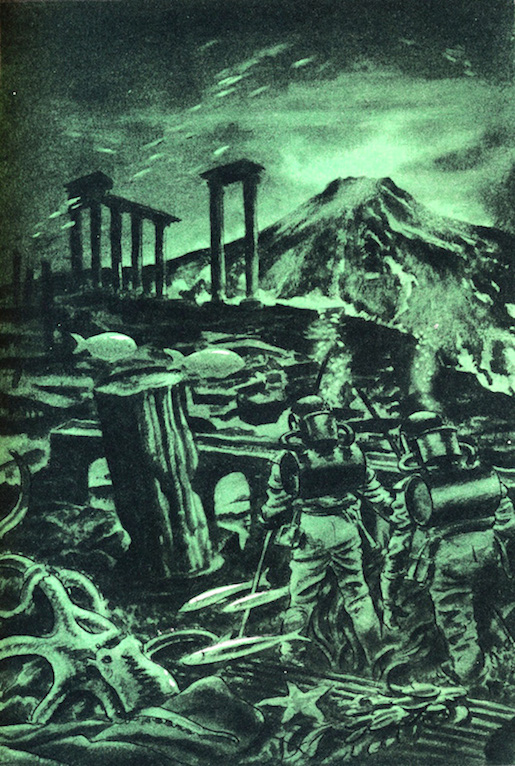 A pretty good history of dive technology is here. It says that the first decompression tables (for keeping track of the safe time limits at different depths) were developed by J.S. Haldane, intrepid self-experimenter, inventor of the WWI gas mask, and father of J.B.S., a giant name in evolutionary biology. A detailed Wiki timeline of diving history is here. I was surprised to see there that even before Verne, some people had experimented with self-contained air systems on the “rebreather” principle, in which air is chemically recycled rather than expelled. I guess this was the only option before high-pressure cylinders could be built. Rebreathers even now can be a bit dangerous; what were they like in 1850?

A new short film which explores the sense of weightlessness in free-diving is here (via Wetpixel).

The Verne illustrations are by Edward Wilson, for a 1956 edition, reissued (beautifully) by Easton Press.

This entry was posted in Tools and tagged camera, scuba, verne. Bookmark the permalink.

One Response to 12. Technology and Imagining