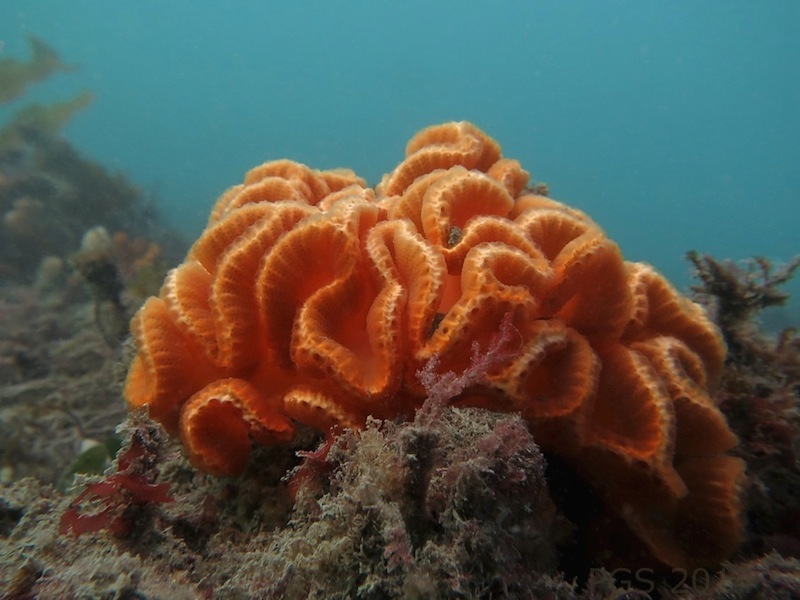 The nerve cell, and nervous systems, evolved in the sea, perhaps 700 million years ago or so. From there they ramified and are found in nearly all forms of animal life.

I saw the orange brain above last week at Nelson Bay, Australia. It’s taken me a while to work out what it is; initially I thought it might be a sponge or soft coral. In fact it’s an “ascidian,” Sycozoa cerebriformis. Unlike sponges and corals, ascidians are quite closely related to us – they’re chordates, living over on our side of many of the deep-time branchings in the history of animal evolution.† A larger group they fall into, within the chordates, is the tunicates.

A young ascidian swims about like a tadpole. Then it anchors to a surface, metamorphoses, and enters a life of filter-feeding. Some live alone, and some bud off more zooids to form a colony of connected and similar units. The brain-like object above is a colony of these smaller units, living partially fused in folded rows.

I don’t have a good photo of an individual free-living ascidian, partly because they’re usually so entangled with other organisms, and partly because in all the photos I’ve taken up till now, some other animal is the focus and the ascidians are in the background. Here is one, though, with a nudibranch walking by, giving a sense of the bulbous shape of the body and trumpet-like spout. Each zooid in the cerebral colony above is smaller and softer (and the purple below is not part of the ascidian, but an encrusting sponge.) 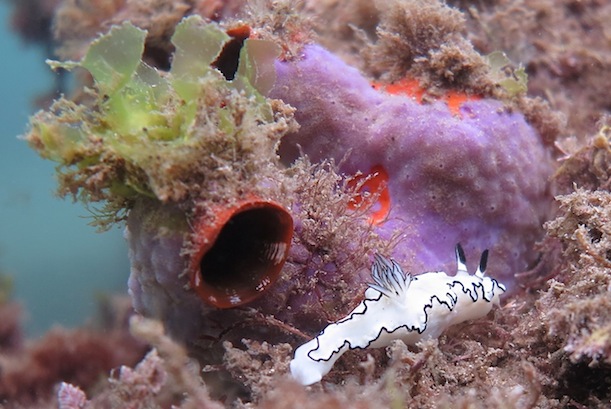 Once I began reading about S. cerebriformis and its relatives, I realized that all sorts of things I’d been seeing under the sea – and vaguely thought were sponges, or someone’s eggs, or outright hallucinations – were actually ascidians. This colony of blue ghosts is an example: 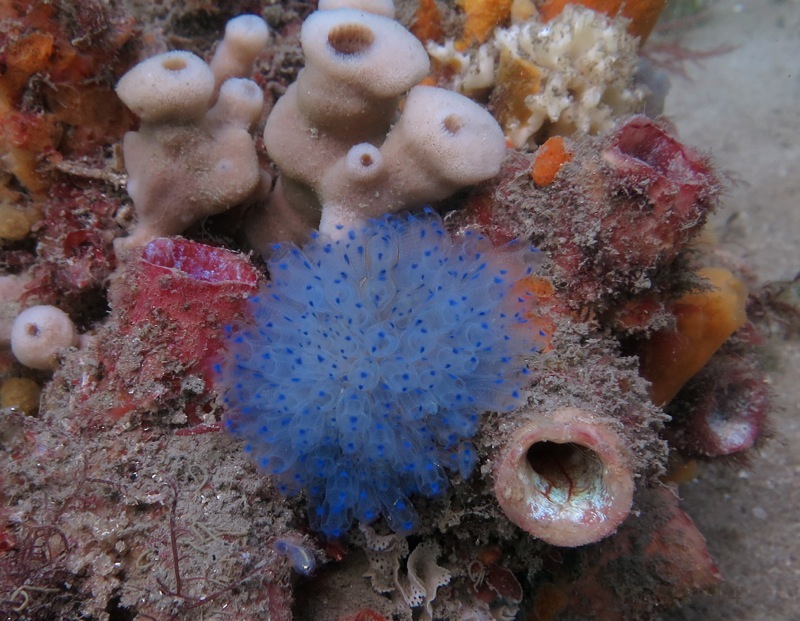 A young ascidian swims about like a tadpole, I said, and then anchors and metamorphoses. Some features of this change have been taken to contain a message about nervous systems and their role in life. As the story goes, the tadpole stage has a miniature but effective brain, to enable the animal to swim. Then once it settles, the brain is of no more use, and is eaten. A number of philosophers, including myself and Pat Churchland, have reproduced the story. But in reading up on ascidians for this post, I came across a recent paper by George Mackie and Paulo Burighel about the adult ascidian nervous system, which tells a different tale:

[A]ccording to Llinás (2001), “the tadpole-like larva literally digests most of its own brain and reverts to the more primitive, sessile adult form of the species. The take-home lesson…is that a brain is necessary only for actively moving creatures.” In fact, adult ascidians have perfectly good brains, an order of magnitude larger than those of their larvae, and their behaviour is as finely adapted to sessility as that of the larvae to motility.

Ascidians have no eyes but can sense light. Some have specialized cells that “listen,” acutely, for vibrations in the water, and can detect vibrations about as accurately as salmon. Other parts of the ascidian nervous system follow paths of largely unknown function round the internal organs.‡ Some of the message here is one I am seeing in a lot of work in this area: how much of animal nervous systems are concerned with self-contained internal coordination of bodily activities, rather than responding to external events. Another part of the message is the sensitivity even motionless animals like this have to what goes on, listening as we pass.

† Here’s a fragment of the tree of life, showing the location of tunicates and some other animals.

‡ A diagram from Mackie and Burighel’s paper, showing the body plan and brain: 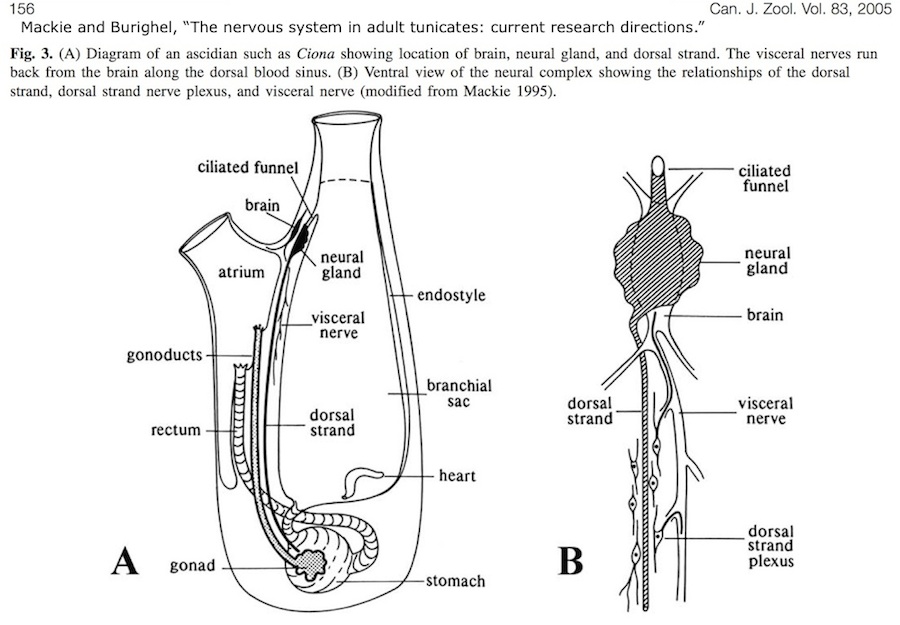 †† I’ve not found much literature about Sycozoa cerebriformis itself. But here’s an extract from a larger study of this group.

This entry was posted in Bodies and Minds, Nervous Systems. Bookmark the permalink.