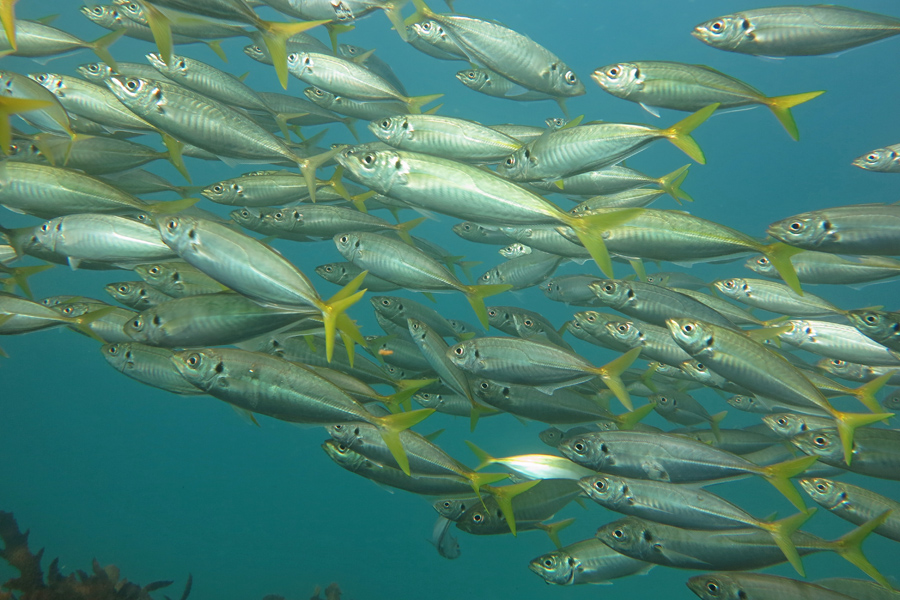 The text of this post is a talk I gave yesterday at a symposium at New York University: “Seeing Seafood as Animals,” organized by NYU’s Animal Studies Initiative. The aim is to take a look at connections between my work on the evolution of subjective experience and moral questions about food.

Animal life (very probably, all life) first evolved in the sea. So did perception and behavior, nervous systems, learning and memory. The history of animals began some time between 700 million and a billion years ago. Their fossil record begins with an enigmatic period called the Ediacaran, 635-540 million years ago, and the Cambrian then sees the appearance of bodies that make possible fast-moving, active lives. The main animal groups appeared and diversified. So far, all of this took place in the sea.

Some of the history of animals – leaving many groups out – can be represented like this: 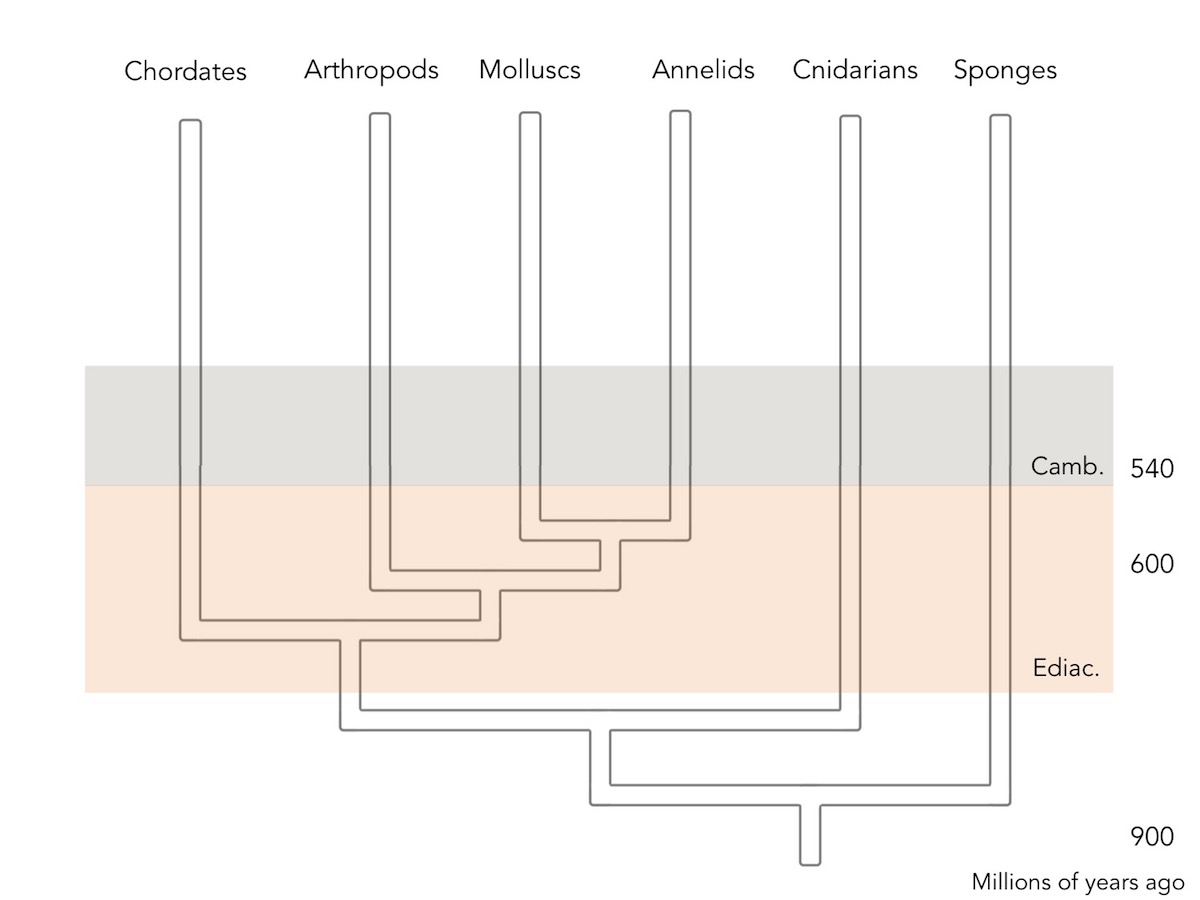 I’ll focus here on three groups: chordates, which include vertebrates like ourselves and fish, arthropods such as insects and lobsters, and molluscs like clams and octopuses. These groups contain most of the animals we eat. Animal life on land comes later, perhaps around 420 million years ago, with arthropods leading the way and others following.

Somewhere in this history we have the evolution of subjective experience. What I mean by this is roughly what people sometimes call sentience, the fact that for some animals it feels like something to be them. (This is often now referred to as consciousness, though I think that terminology is a bit misleading.) It is very hard to get a handle on the evolution of subjective experience, but one reasonable picture looks like this. After the early divergence of different forms of animals, a handful of lineages evolved complex nervous systems, rich sensing, and lifestyles that involve elaborate, finely coordinated engagement with the world. Let’s suppose, as I think, that these features bring with them subjective experience. If so, this arose in parallel, on several lines. The history of subjective experience (shaded in red) might then look very roughly like this: 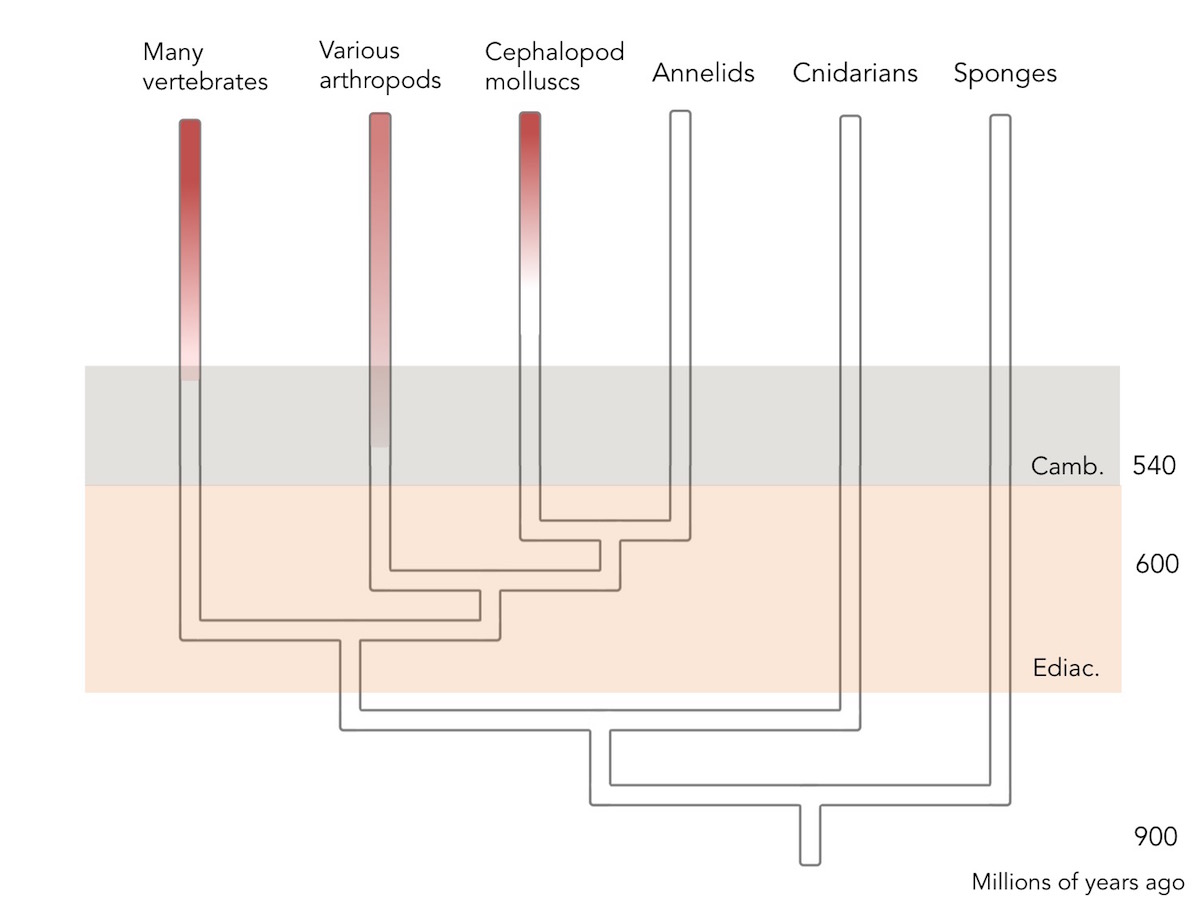 The chart includes just particularly good candidates within some major groups, not all candidates. A feature seen in those three lineages, for example, and apparently not outside them, is learning by tracking good and bad events, and noting the consequences of one’s actions.

Let’s look at some work on pain, for animals in those three groups. Pain in fish is something that Victoria Braithwaite (who spoke at the symposium) has taught us a great deal about. I will leave the fish to her. What about the invertebrate groups?

The hard problem all across this field is finding evidence for experienced pain, as opposed to mere detection of damage (or nociception) and adaptive response to it. For various reasons it’s reasonable to think that nociception can occur without experienced pain. One thing researchers then look for is flexible responses to damaging stimuli, responses that show a kind of integrated handling of the situation. Fish and chickens, for example, will seek out analgesics, when damaged, and not otherwise. Another good clue is wound-tending and improvised protection of an area.

In decapod crustaceans, such as prawns and crabs, some important work has been done by Robert Elwood. Hermit crabs, he found, can be induced to leave their shell by electric shock, but are more reluctant to leave a higher-quality shell, or to leave when the odor of a predator was around and the shell was valuable for protection. The crabs trade off competing goals and problems. Elwood thinks that for various of these crustaceans there is reasonable evidence of pain.

People tend to associate crustaceans with insects. Insects are indeed their fellow arthropods, but they might be quite different in these areas. Insects appear to behave normally, to the extent that they physically can, even after quite severe injuries. They don’t groom or protect injured parts of their body, but keep doing whatever they were doing. Crabs and some shrimp, in contrast, will groom injured areas.

In the case of octopuses, a recent paper by Jean Alupay and her colleagues found that individuals who’d had their arms crushed (not too much) in an experiment guarded and tended the injured site for some time. (Her species can also amputate arms at will, and some of them did that.)

This suggests that there might be different forms of subjective experience present in different groups, in ways relevant to welfare questions. In insects, such as bees and crickets, there is complex control of action, sometimes quite complex learning – including learning through reward – but not much sign of pain-like experience.

The most conspicuous arthropods on land are insects and spiders. Not many land arthropods are eaten. In the sea, crustaceans are numerous in the way insects are on land. Some are small and live simple lives. But the literature I’ve covered here suggests that, with respect to the morally significant kinds of subjective experience, marine crustaceans might be quite notable, not similar to insects, and may well have pain-like experiences in some cases. The same may be true of many cephalopods.

Turing to the moral questions, we must then consider a notable feature of seafood: the role of small animals killed in vast numbers, of which prominent examples are prawns and shrimp (which are among the crustaceans covered by Elwood’s work), and small fish (whitebait, etc.). I’ve seen various different figures for the total number of prawns (/shrimp) eaten each year by humans, but a rough calculation from the Wikipedia figures for recent production of farmed prawns (by weight) suggests a figure of about 135 billion animals per year. We can double that to get a rough total, for wild-caught and farmed: 270 billion per year. As Elwood also notes, “A person who eats a 200 g portion of beef every day will consume 25 animals over a lifetime of 80 years. If that person has a prawn cocktail as a starter for just one meal, more than 25 animals could be consumed in one day.”

If there is a welfare issue here, it is an enormous one. I’ll offer some general thoughts in that area to finish, looking at our different relations to animals in the sea and on land. 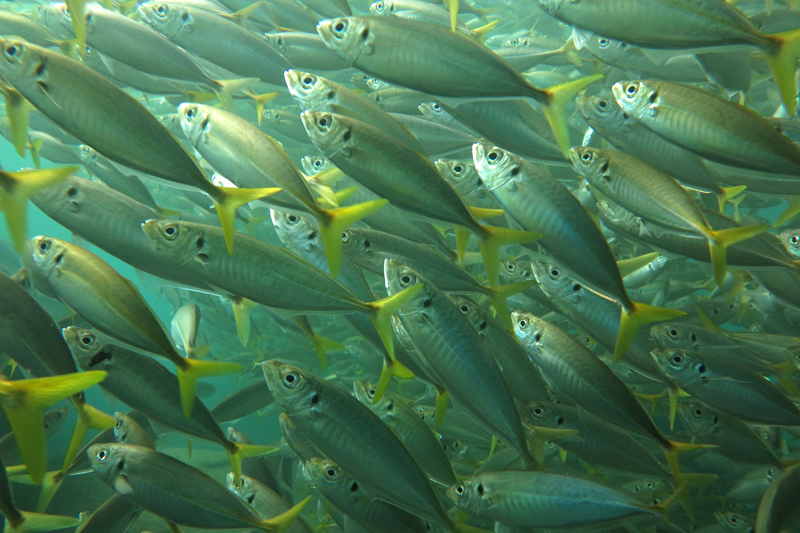 In the case of farmed animals of the familiar kinds, their lives would not exist at all without farming. The deaths would not occur, and not the births either. Their entire existence is a result of our decisions – we have every kind of causal responsibility for them. Given our immense control over them, the first question to ask is whether we are giving them a life worth living, or not. In the case of factory-farmed mammals and birds, I think we presently do not. But I think that the best current farming practices for animals like cows and chickens does give them a life worth living, and a life better than the wild analogue, to the extent that such a thing exists. I think it’s OK, in that subset of cases, that we bring them into existence, given how things will go. Present-day factory farming, especially of chickens and pigs, is an abomination, but I would reform farming rather than shutting it down.

In the case of wild sea animals, we do not control their lives, and have not transformed these animals biologically, through breeding and domestication. Instead we intervene to end their lives – we end lives that would end anyway.

We then have a different kind of responsibility for their suffering, when it exists, than we do in the case of farmed animals. We are the productive agents of their deaths – we make those particular deaths occur – and we are also difference-makers with respect to the timing and the manner of death. But their lives as a whole are not the products of our choices, and we don’t make a difference to whether they will die at all – they will die anyway, in some way or other.

For animals such as lobsters and, I assume, many fish, their lives are considerably shortened by being caught. (Lobsters can live for many decades.) Squid and octopuses, in contrast, live for only a year or two anyway. In those cases, we don’t much affect the timing of death as measured in absolute terms, though I suppose we often do cut off a substantial fraction of their lives. (Nearly any period is a substantial fraction.)

Once our responsibility is limited in these ways, the questions to ask are altered. The first question is whether the kind of difference-making we do is one that makes them much worse off, perhaps making their life one that was not worth living at all. If we take a life that would have been worth living, and make it not worth living, because of our role in the manner and timing of the death, that’s bad. In many cases, though, I suspect and hope we are not making that kind of difference. I think that sustainable wild fishing is OK in principle. I don’t mind being a productive agent of the deaths, or a consumer within a system that does those things, as long the difference we make is not too malign.

When we consider farmed seafood, which is now roughly 50% of the market, the questions are altered. Now we’re bringing into existence those countless billions of animals, and the questions to ask are the same ones to ask about more familiar farmed animals. What sort of lives are we bringing into being? In the case of fish and crustaceans – which are not like insects – the work of people like Braithwaite and Elwood should surely make us pause and think.

The other speakers at the NYU symposium were Victoria Braithwaite, Lori Marino, and Becca Franks. Jennifer Jacquet organized the event.

The historical charts above, and the choices made about the areas shaded, are discussed in more detail in a paper here.

The photos are of, and inside, a school of Yellowtail Scad which roams the Cabbage Tree Bay Marine Reserve in Australia.

This entry was posted in Arthropods, Bodies and Minds, Cephalopods. Bookmark the permalink.